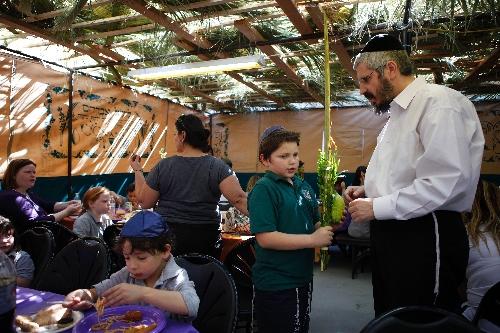 It’s part historical remembrance and part harvest festival, with maybe a bit of a picnic or a campout thrown in.

It’s Sukkot, the Jewish festival that this year began Sept. 30 and runs through Sunday. Sukkot, said Rabbi Shea Harlig of Chabad of Southern Nevada, serves as a reminder to the Jewish people of God’s providence and protection to their ancestors during their travels in the desert.

During the exodus from Egypt, God surrounded his people with clouds to protect them from the desert’s climate and hazards, Harlig said. “So, No. 1, it commemorates the protection God gave the Jewish people in the hot desert.”

During Sukkot, Jewish people say special prayers and eat their meals in a sukkah, a temporary dwelling that brings to mind the miracle of the clouds as well as the sort of dwellings in which their ancestors lived.

In fact, Jewish people are to regard their sukkah as their home for the duration of Sukkot, and some “even sleep in them,” Harlig said.

The shelters can be made of a variety of materials – today, “you even have these pop-up kits,” Harlig noted – but all are to be of only temporary design and have roofs made up of some sort of vegetation.

“The roof has to be made out of something that grows” Harlig said, adding that, here, palm fronds are the most common option.

Some people erect a sukkah at their homes, while others will “stop by the temple” to make use of a community sukkah, Harlig said.

“But the more traditionalist people put one up.”

The feast of Sukkot also serves as a harvest festival, Harlig said. “At the time of the harvest, you’d take all the crops into your home and feel very secure now that you have all of your food for the rest of the year.”

But, Harlig continued, Sukkot also reminds us that “you still need God’s protection” and serves as a caution against arrogance.

That unity is recalled by the way in which worshippers dine together in Sukkot during the observance, as well as daily blessings of the “four kinds” – for example, citron, palm frond, myrtle twigs and willow twigs – that represent the various personalities that make up the community of Israel, Harlig said.