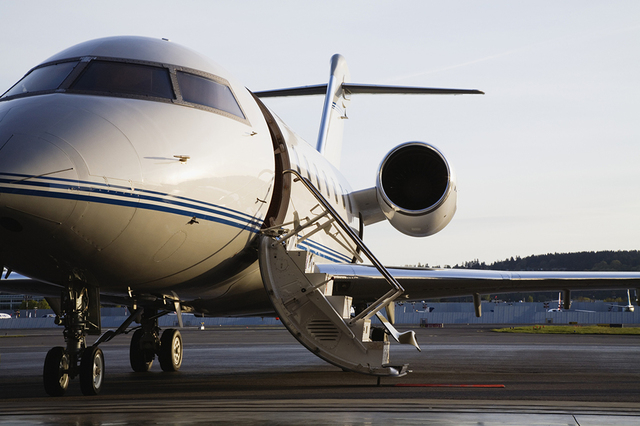 The business meet wraps up in Boston, now an urgent situation is developing in Los Angeles.

However, the flight doesn’t depart until first thing tomorrow.

But hang on, there’s another option.

A private jet, leaving when you want it to leave.

And it’s cheaper too.

In the wake of Uber’s shake-up of the taxi market and AirBnB’s impact on accommodations, that most exclusive industry of all, executive aviation, could soon be disrupted in the same way.

So does that mean that ordinary business travelers could soon be switching to low-cost private aircraft in the same way they’ve been switching to cheaper, convenient cabs across town?

Some aviation entrepreneurs think so.

Obviously private aviation isn’t going to be for the masses, but what if this exclusive preserve of the super-rich is about to become accessible to the merely affluent — those that today fill the front cabin section of commercial aircraft?

Instead of calling a broker or buying into shared exec jet ownership, these new apps allow travelers to secure a private aircraft with just a few clicks and no membership fees.

“We are a high tech big data company at core,” says Sergey Petrossov, Jetsmarter’s founder, adding that most of his company’s clients are newcomers to executive aviation.

Petrossov sees a future where the executive jet industry goes the way of the Uber-reshaped taxi market.

He expects apps to become so efficient that prices drop to the point where private aircraft not only take business from traditional operators and airlines, but even from road transport.

Fleets of small propeller aircraft could lure people away from cars and into the skies.

Yes, some new players are streamlining the booking process, he says, but that might not be enough to bring prices down to levels that’ll open up private flights to greater numbers.

Koe instead thinks the online players might simply end up taking business from traditional brokers rather than disrupt the industry’s structure.

They could, however, offer an efficient solution to the problem of so-called empty legs.

These happen when private jets fly without passengers as operators reposition them.

According to some industry estimates, empty legs account for more than a third of all private flights.

Jetsuite, a light-jet operator based in California, pioneered discounted online sales of empty legs and others have followed suit.

Jetsmarter even offers empty legs for free to clients signing up for its optional membership plan.

There’s a major drawback though.

The rigid and unpredictable nature of empty legs doesn’t really suit the flexibility needs of the private jet crowd.

While heavily discounted “empty leg” flights make for excellent marketing material, only a fraction of those actually end up being sold.

With on-demand charters still the bread and butter of exec aviation marketplaces, it’s in precisely this area that digitization can make a difference by adding extra layers of transparency.

Which is why Victor Aviation, a UK-based company that’s just closed an $8 million funding round to expand in the United States, has decided to make of transparency its chief selling point.

Normally, passengers calling a broker would be told very little about the aircraft they’re hiring — nothing about the plane type, the operator or the commission they’re being charged, says Victor’s founder and CEO Clive Jackson.

By making all these details available through its website and app, Victor hopes to build long-term trust-based relationships with its clients.

Other players are experimenting with new pricing models instead.

JetMe offers a reverse-auction feature on its website and app.

Customers enter the destination and dates of their flight on Jetme’s website or app and are given a tentative quote based on an analysis of market prices.

They’re then given the option to submit their own bid.

Jetme’s system is smart enough to tell users what chances their bid has of being accepted by aircraft operators, allowing them to make a more informed decision on whether to submit it.

Members pay a monthly fee ($1,750 for Surfair, $2,000 for Beacon) that allows them to fly as many times as possible on certain routes.

This model is more akin to that of scheduled airlines than to that of executive jet charter operators, since flights are limited to a number of trunk routes and passengers share the aircraft with other travelers.

However, this might suit the needs of ultra-frequent fliers who find themselves commuting between two given cities, let’s say, New York and Boston, several times per week.

Beacon CEO Wade Eyerly claims this way of flying has helped seal many business deals, as the flights provide a perfect venue for professional networking.

Those that do not mind sharing the ride with strangers can also use BlackJet.

Launched in 2012 with the backing of some A-list celebrities, BlackJet has been recently repositioned as a marketplace for private jet seats after undergoing some turbulence.

Blackjet lets members book seats, at a significant discount, on private flights that’ve already been scheduled but are not flying at full capacity.

The limitation, as in the case of empty legs, is that passengers are dependent on aircraft being available on their route and time of choice.

Pere Suau-Sanchez, a lecturer in air transport management at the UK’s Cranfield University, says this tradeoff between cost and flexibility, together with the fact that many airlines have been busy improving their first- and business-class products to keep top-tier corporate clients, could be a significant obstacle when it comes to attracting new customers.

So which one of these models will last?

Will there be a winner-takes-all scenario or a more fragmented market, with each player catering to the needs of specific market segments?

The jury is out.

If what happened to other industries after going digital is any guide, we might see a significant degree of consolidation among these marketplaces, perhaps with smaller players holding their ground by catering to niche markets and offering different business models.

The democratization of private flying has proven elusive so far and it’s likely to remain a challenging proposition.

However, if just one of these ambitious aviation entrepreneurs manages to get their way, the super-rich might soon have to start looking for new, more unassailable, status symbols.