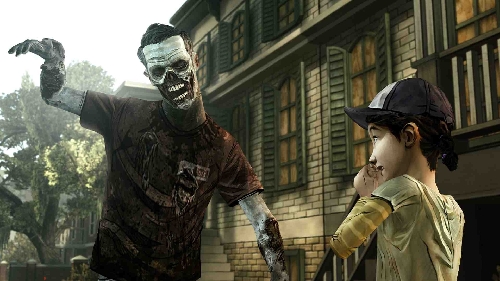 When the zombie apocalypse breaks out, you portray a guy named Lee, a convicted killer (and University of Georgia professor). He is in a cop car, being taken to prison.

Fortunately for Lee, a zombie jumps in front of the cop car, causing it to wreck. That frees Lee. What a lucky break.

Lee’s unlucky break: Zombies are everywhere, and they have a zest for his death.

But this excellent and filmic game, “The Walking Dead,” is not a standard operating experience for gamers.

Instead of making us stupidly shoot zombies by the dozens every minute, we must pay attention to all the film scenes, listen intently to each character and answer them – with emotion!

This game is more like a playable movie. It’s not a shooter. It’s a point-and-click adventure. You watch the film scenes then click dialogue options.

Should you tell fellow survivors you’re a convict?

Main story line: You befriend little girl Clementine, and you protect her. So, should you lie to her or tell her the truth about your life?

Choices matter. Each time you make a talking or action choice, this changes all sorts of story line outcomes.

When you are holed up at one farm, you must choose to save the life of one of two sons. Which son do you let die? There is no great answer. There are only gut-wrenching options during the zombie apocalypse.

“Walking Dead” sets us up for a psychological powder keg. Many reviewers have said they cried playing this game. Crying is truly unique in gaming.

The relationship you develop with the little girl – oh, my goodness, what a tearjerker.

As for your run-ins with zombies, you merely point your cursor at a zombie’s head and click a button to kick them, hit them or shoot them (quick-time events).

Those zombie-kill moments are infrequent. Because they are infrequent, they are startling. Adults die. Children die. In other zombie games, when characters perish, you merely save yourself and move forward.

In this game, when characters die, it’s sad, because death is sad. And there are so few characters, you get to know them and care for them.

“The Walking Dead” is based on the comic series, not the popular TV show.

Those creators give us this quiet, subtle, indie-film-gaming experience that presents a more realistic, intimate portrait of a group of people trying to survive a horrific catastrophe.

Characters argue. They scrape. They weep. Some die terribly. Some survive terribly.

For that depth, I’m grateful. Zombie games are usually all shooting-blam-blam, and running, and “baaahh, brains!”

This game is an indictment of those games. It is a tenderhearted gem of earnest sadness. Bravo.