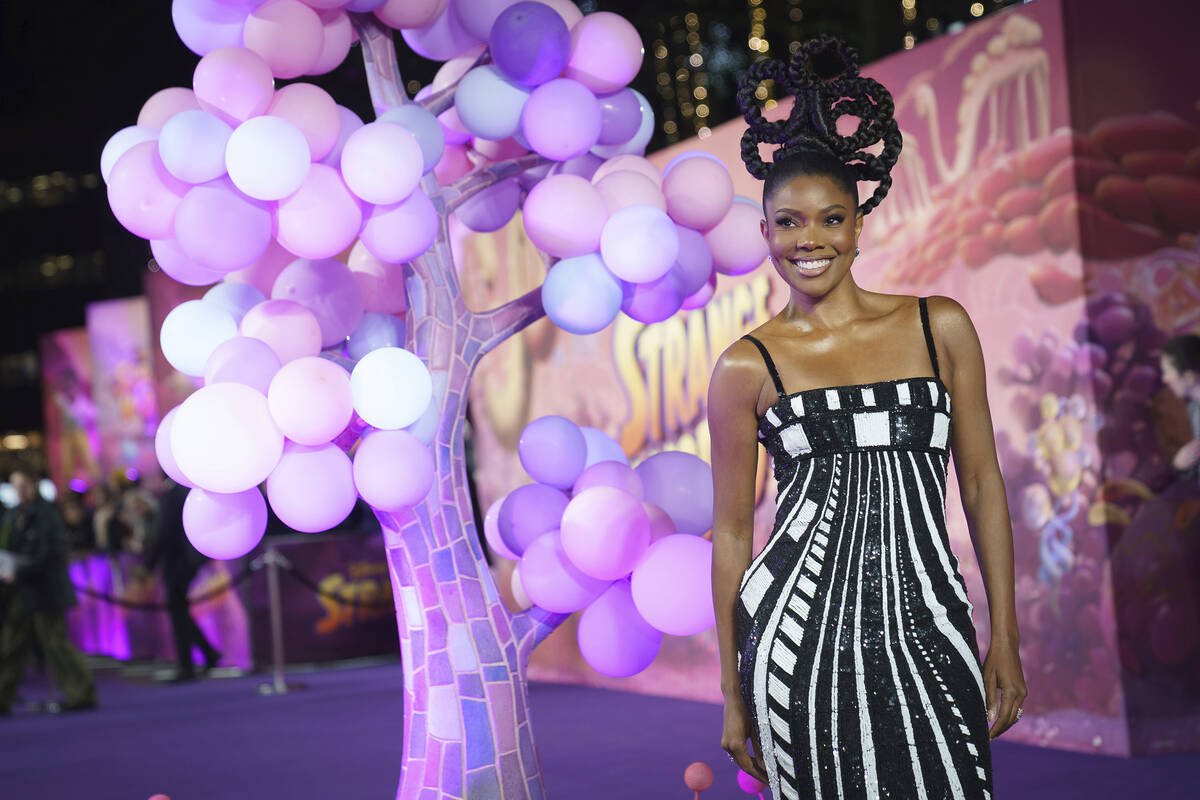 Gabrielle Union poses for photographers upon arrival at the premiere of the film 'Strange World' in London, Thursday, Nov. 17, 2022. (Photo by Scott Garfitt/Invision/AP) 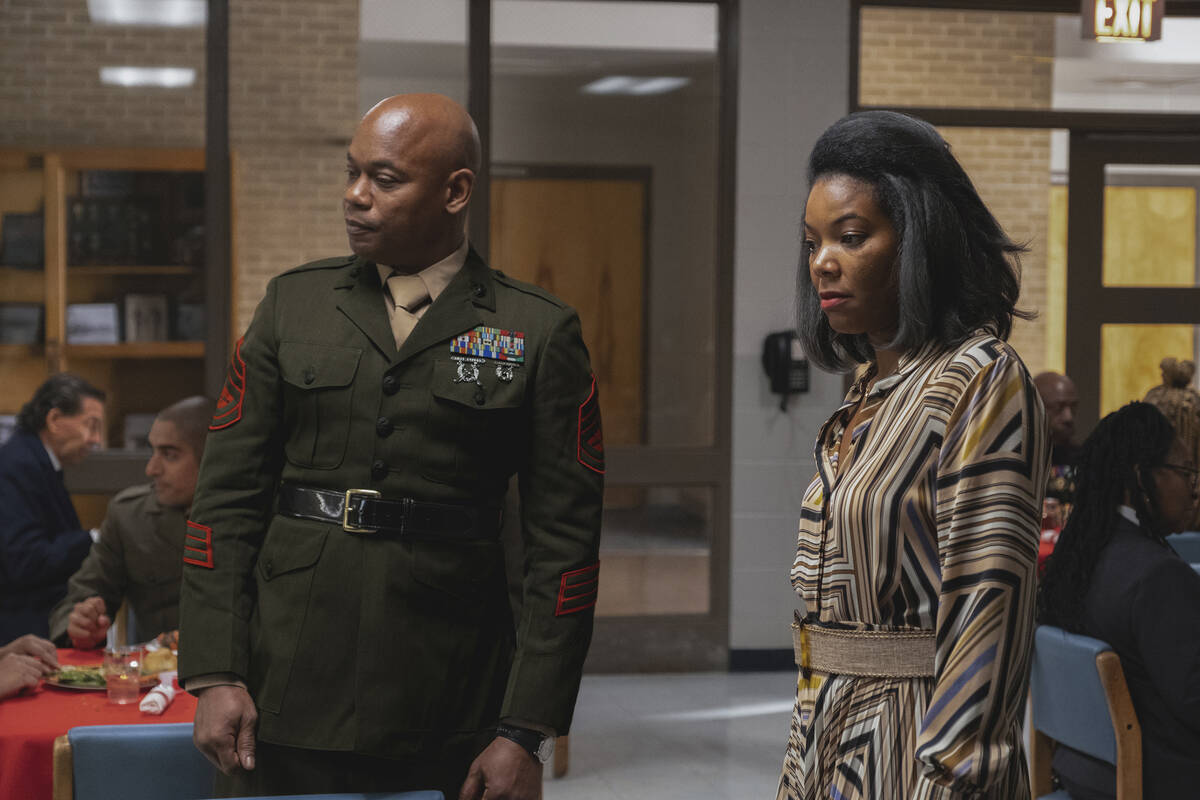 This image released by A24 Films shows Bokeem Woodbine, left, and Gabrielle Union in a scene from "The Inspection." (Patti Perret/A24 Films)

How do Union and Wade teach their kids about finding the joy in life? “Oh, we get down!” she says with a hearty laugh over a Zoom call from her home in Los Angeles. “We do dance as a family. We eat and we dance, which is bonding at its best.”

No, they do not believe in hovering over a hot stove together.

“There’s a chef in our kitchen. He is an NBA star, so we don’t cook.” the 50-year-old Union admits. “We slow dance around the chef, but we don’t chop anything.”

The Nebraska native, known for her roles in “Bring It On,” “Think Like a Man” and the hit BET series “Being Mary Jane,” voices the part of kitchen maven and fighter pilot Meridian Clade in Disney’s animated “Strange World.” Union’s character raises a group of explorers and deals with an MIA, adventure-bound husband (voiced by Dennis Quaid) and a daring son (voiced by Jake Gyllenhaal).

In “The Inspection,” a young, gay Black man (Jeremy Pope) is rejected by his mother (Union) and joins the Marines to win her approval.

The projects are part of a whirlwind year for Union, who once aspired to become a lawyer but veered in a different direction. She followed her heart to acting — just one of the ways she has managed to live the good life.

— Represent: Union took the voice role in “Strange World” because “it showcases a proud, Black woman who loves super affectionately and is very demonstrative with her affection.” She adds, “She loves out loud as a mom, yet she still has a very fulfilling past as a fighter pilot. There are layers and a complexity to her and so much joy in being a mom.”

— Find levity: The animated film came about at the same time as ‘The Inspection,’ ” Union observes. “And I was like, ‘I need some levity.’ I think it’s important in life to realize when you just need to get lighter and laugh. It’s very freeing. You need some chuckles to offset the darkness.” When was the last time she laughed until it hurt? “I took my 4-year-old to the premiere of my animated movie. She’s like my personal Rotten Tomatoes. I heard, ‘Mom, let me tell you what I think of the second act.’ I laugh so hard when she gives me her reviews.”

— Search for moments of freedom: Her “Strange World” voice work didn’t always stick to the script. “I was given freedom, too,” Union says. “The directors would say, ‘Gabrielle, we got that one in the can. Now just, I don’t know, ad-lib! Say what you want.’ And you’re like, ‘OK!’ ” She sums it up: “It’s great when someone allows you the chance to do your thing, too.”

— Fight for what’s right: Before starting her acting career, Union planned to be a lawyer. “I love being on the right side of history. I love fighting for the underdog,” she says. “I’ve always believed that there’s a right and wrong way to do things and that justice can come in many forms.”

— Don’t beat yourself up: “It’s fine to be a woman with a career who wants it all but hasn’t got it figured out every single moment,” she says. “Give yourself that room to figure it out without getting down on yourself. … Most of my friends do really well in one area, but then there’s something else not quite as great. You can’t always live up to that ‘having it all’ myth. Stop being so hard on yourself and other people.”

— Parent with purpose. “I have a big life,” she says of an immediate family that includes little Kaavia and being a stepparent to Wade’s sons Xavier and Zaire and daughter Zaya. Her parenting tips? “We lovingly nudge our children to live their best lives on their own terms,” Union says. “My parenting advice is to just breathe, do your best and lead with love and acceptance.” She adds that you don’t have to repeat what you were taught as a child. “It’s OK to say, ‘Perhaps, there’s a better, more loving, more compassionate way than what previous generations did.’ The most important thing is to lead with love.”

— ‘Beast’ mode: Ask Union about what early film affected her life the most and she doesn’t hesitate. “ ‘Beauty and the Beast,’ ” she says. “It really impacted my dating choices from the mid-’80s through the early 2000s!’ ”

2
Toni Says: How can I stop my Medicare Part B?

3
Cybill Shepherd not afraid of aging on ‘spiritual journey’ 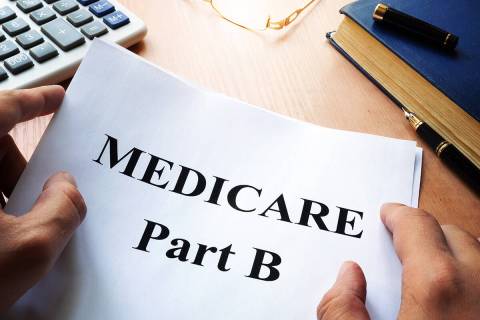 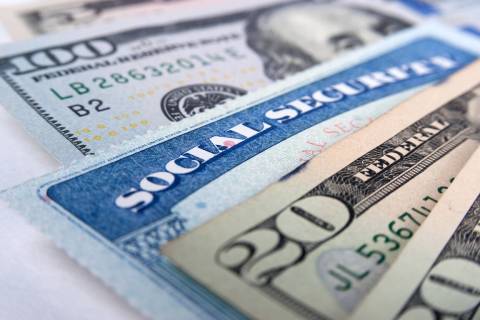