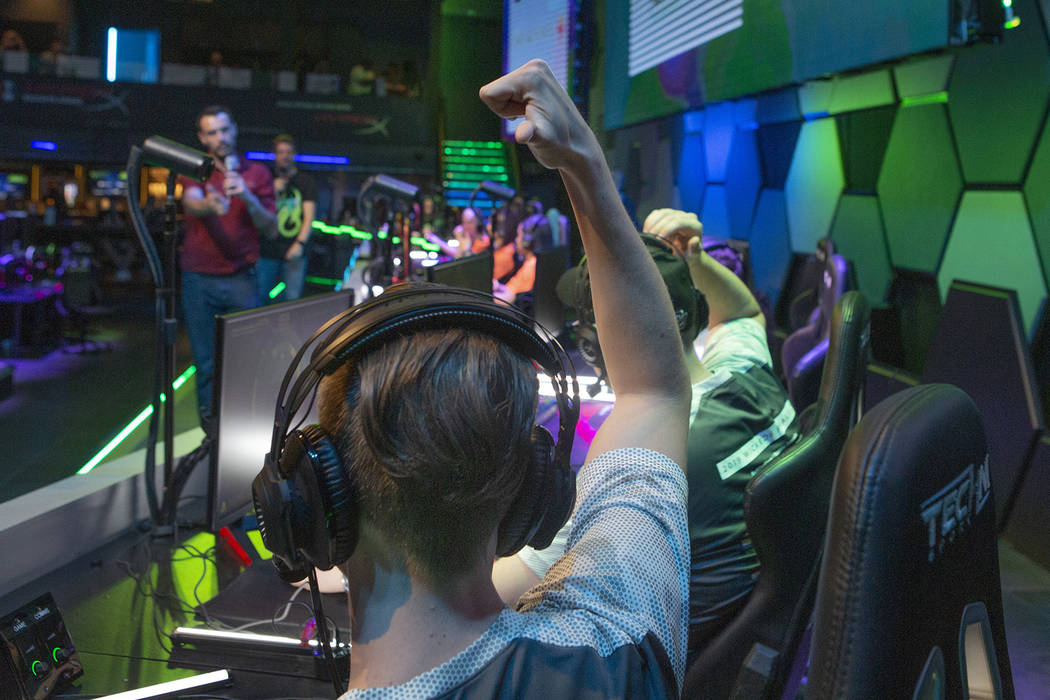 Cory Cranford, 25, left, and his teammates of BuffOvrFlows, from the University of Colorado Boulder, give a thumbs up during the Wicked6 hackathon games at HyperX Esports Arena at Luxor on Thursday, Aug. 8, 2019, in Las Vegas. (Michael Blackshire/Las Vegas Review-Journal) 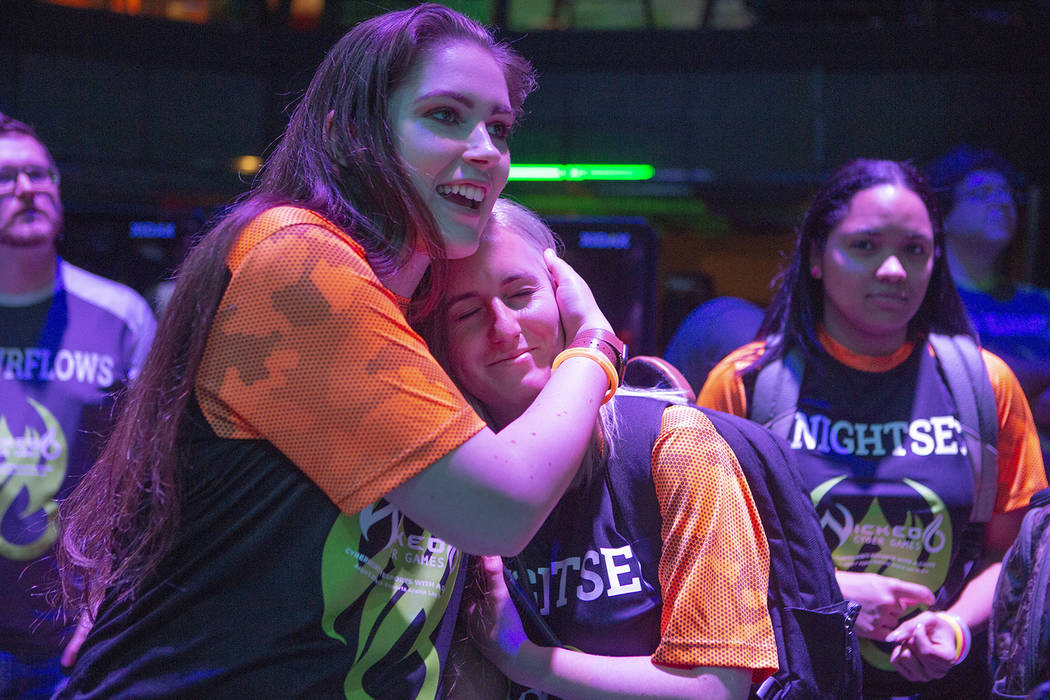 Lauryn Landkrohn 22, hugs fellow Knightsec teammate Sydney Munro, 23, both from the University of Central Florida, as they anticipate the announcement of the finalist for the final round of competition during the Wicked6 hackathon games at HyperX Esports Arena at Luxor on Thursday, Aug. 8, 2019, in Las Vegas. (Michael Blackshire/Las Vegas Review-Journal) 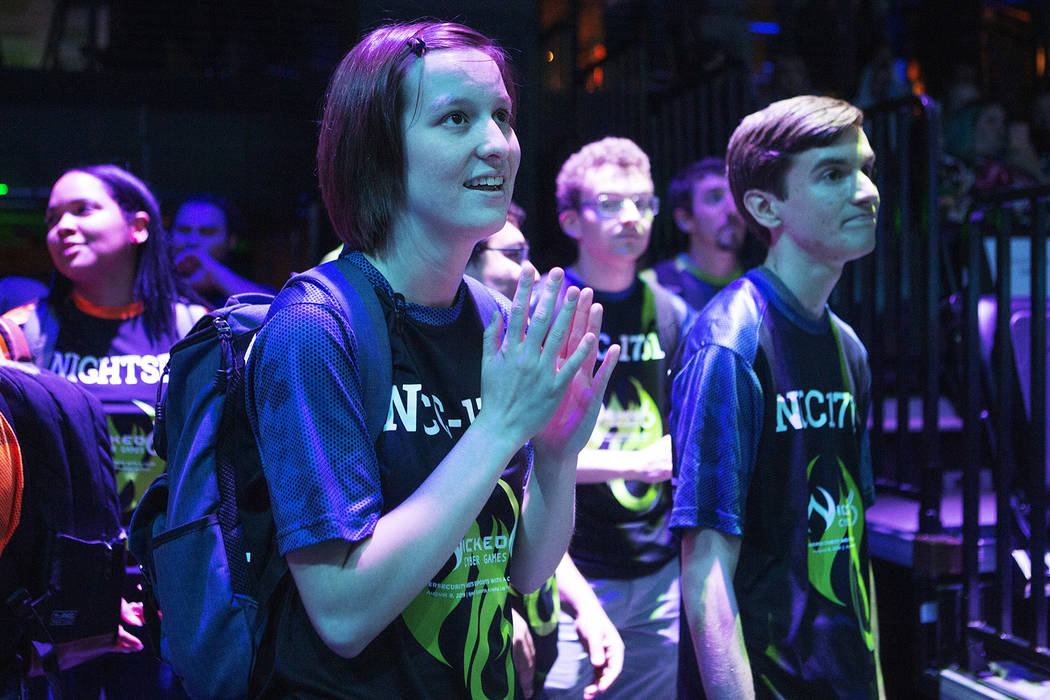 Jamie Poston, 23, left, from the University of Nevada Reno, waits in anticipation with members of NCC-1701, including fellow Reno student Bryson Lingenfelter, 20, right, as they wait for the announcements of who made the final round of the competition during the Wicked6 hackathon games at HyperX Esports Arena at Luxor on Thursday, Aug. 8, 2019, in Las Vegas. (Michael Blackshire/Las Vegas Review-Journal) 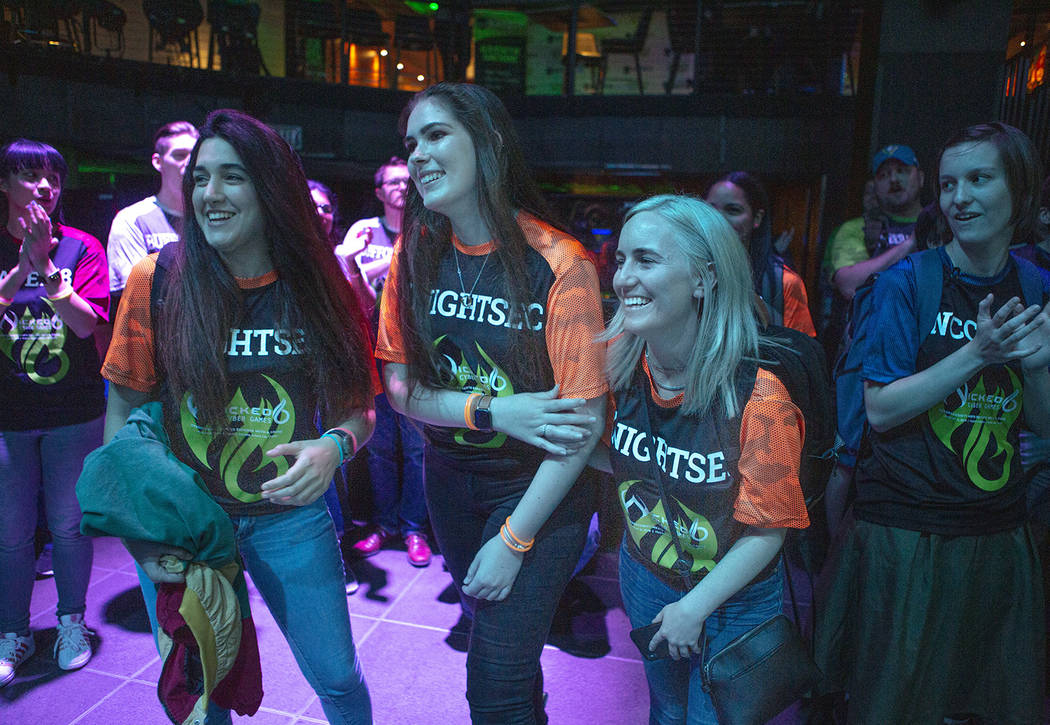 The Knightsec squad including from left, Sara Aladham, 20, Lauryn Landkrohn, 22, and Sydney Munro, 23, from the University of Central Florida, smile as they find out they are heading to the final round of the competition during the Wicked6 hackathon games at HyperX Esports Arena at Luxor on Thursday, Aug. 8, 2019, in Las Vegas. (Michael Blackshire/Las Vegas Review-Journal) 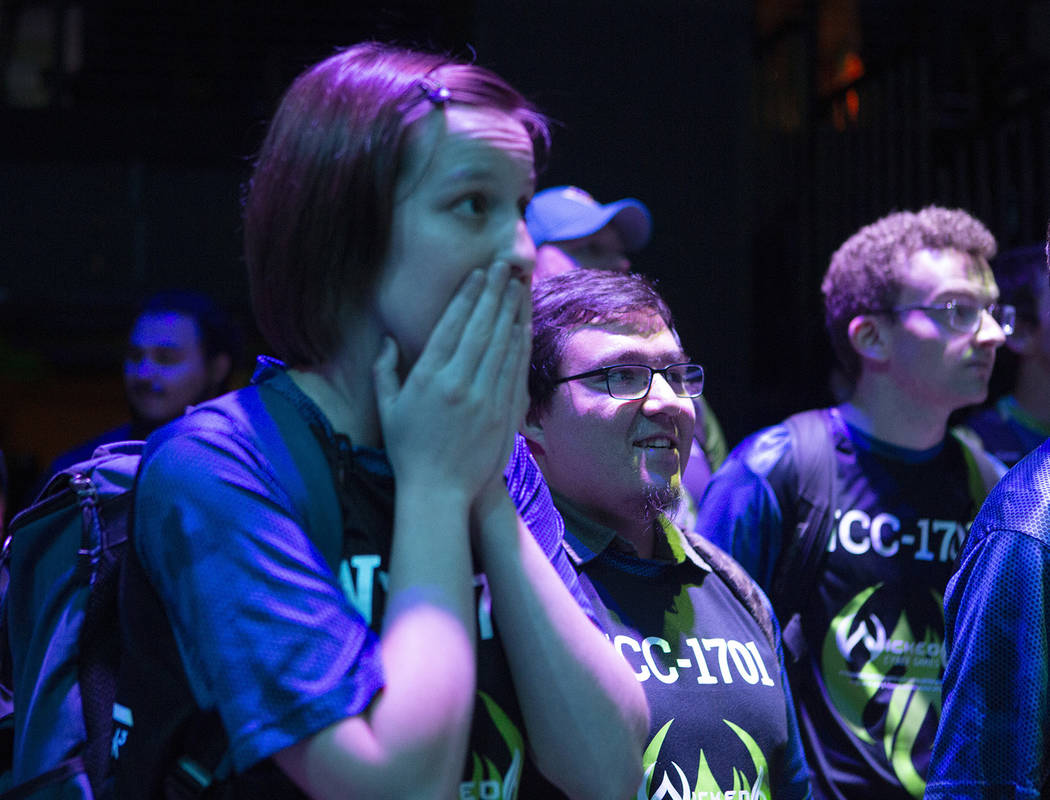 NCC-1701 team members and University of Nevada Reno students Jamie Poston, 23, left, covers her face in excitement as teammate Ignacio Astaburuaga, 23, center, watches to see the announcements of who made the final round of the competition during the Wicked6 hackathon games at HyperX Esports Arena at Luxor on Thursday, Aug. 8, 2019, in Las Vegas. (Michael Blackshire/Las Vegas Review-Journal) 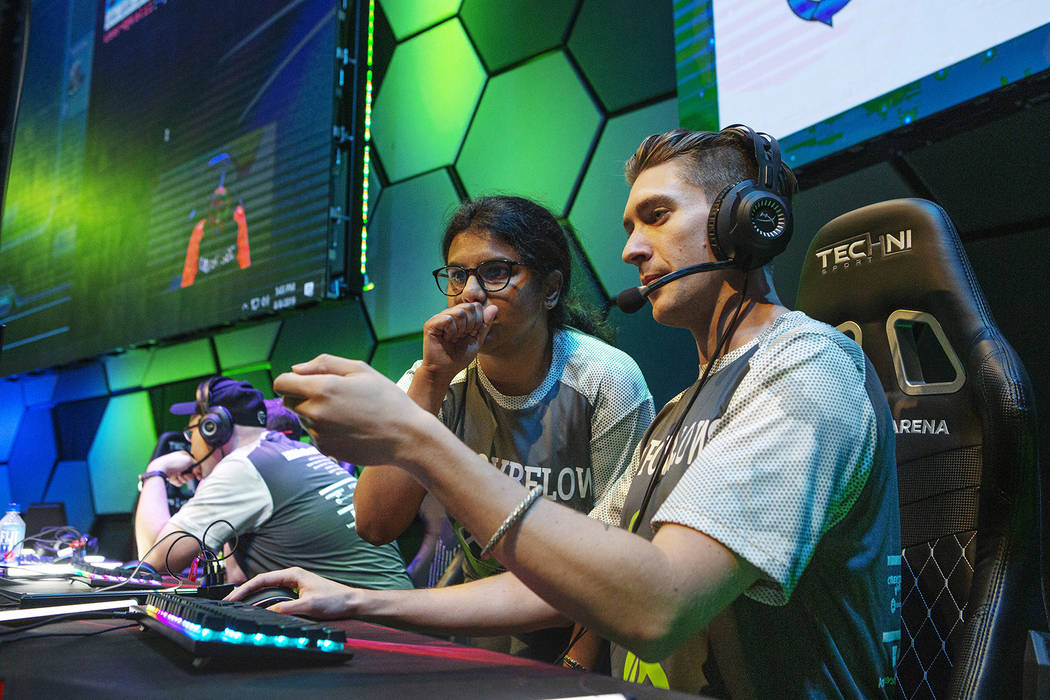 Teammates Shilpa Joshy, 24, left, and Cory Cranford, 25, right, of BuffOvrFlows, from the University of Colorado Boulder, discuss what to do next during the Wicked6 hackathon games at HyperX Esports Arena at Luxor on Thursday, Aug. 8, 2019, in Las Vegas. (Michael Blackshire/Las Vegas Review-Journal)

Jamie Poston is among few women in her computer science classes at the University of Nevada, Reno.

“I go into a class and calculate the percentage, and I always get sad about that,” the 23-year-old said.

But Poston — a second-year graduate student — notices more women in her classes when they’re taught by a professor who’s a woman. It’s a more comfortable atmosphere and it’s not “the imposter effect” of being in a male-dominated class, she said.

Poston — who grew up in Virginia City — is working on a master’s degree in computer science and engineering, and is slated to graduate in spring. She hopes to pursue a career in data science.

She was among four students — and the only woman — on UNR’s cyber club team that competed at the Wicked6 Cyber Games, a college “hackathon” competition, Aug. 8 at the HyperX Esports Arena Las Vegas at the Luxor.

Poston said she was excited Wicked6 was at the Luxor. Typically, events are in school cafeterias and gymasiums, she said, but at the Luxor, “this is legit. It brings up the prestige of the competition.”

The purpose of the first-ever Wicked6 competition was to attract more students to cybersecurity careers and help diversify the pipeline of incoming professionals. The event was also a fundraiser for the Women’s Society of Cyberjutsu, a national nonprofit that provides training, mentoring and support for women in cybersecurity careers.

Globally, a cybersecurity workforce shortage of 1.8 million is expected by 2022, according to a January report by the Center for Strategic and International Studies. The shortage comes at a time when cyberattacks against companies are on the rise, which has led to compromising sensitive information affecting millions of consumers.

So what’s cybersecurity? It’s protecting against digital attacks — for instance, when someone is trying to get access to a company’s computer systems to steal money, information or shut things down to interupt business.

It was the last in a series of competitions, and the pool of college cyber teams began with 21. The top six qualified for Wicked6, and University of Colorado Boulder won.

Teams defended a fictitious company against cyberattacks. Announcers called out the plays, and an in-person and livestream audience watched. Gov. Steve Sisolak gave a speech at the event.

Each team was required to have at least one woman, and most had only one. The exception: All four team members from the University of Central Florida are women.

During the final round at Wicked6, the three top teams — East Coast Polytechnic Institute, Columbia; University of Central Florida; and University of Colorado Boulder — were on stage at the HyperX Esports Arena Las Vegas.

Before the finals began, techno-type music was playing in the dimly lit arena and colorful lights flashed as dozens of people sat in stadium-style seats facing a stage.

The final challenge was an offensive mission to gain access to the internal network of a water-treatment plant.

Women make up about 24 percent of the cybersecurity workforce, according to the International Information System Security Certification Consortium.

Microsoft, one of the sponsors of Wicked6, has an interest in getting more people into the pipeline for cybersecurity jobs and increasing the diversity of those entering the profession, said Ann Johnson, Microsoft’s corporate vice president of cybersecurity solutions.

Those going into the field can expect to make a good living — especially given that there’s a shortage of workers and a huge need to protect companies from cyberattacks, Johnson said.

Mari Galloway, chief executive officer and a founding board member of the Women’s Society of Cyberjutsu, has worked in cybersecurity for 10 years. She said it’s an extremely rewarding career, and there are many avenues one can pursue.

Galloway, who moved to Las Vegas 2 1/2 years ago, works as a senior cybersecurity architect for a casino. Her role with the Women’s Society of Cyberjutsu is a volunteer position.

The Virginia-based nonprofit was founded in 2012 and has more than 2,400 members.

“There’s the need for doing more than talk about cybersecurity,” Galloway said, adding that more women and those from minority groups are needed in the profession.

Poston became interested in computer science after attending a programming camp in 2009 at UNR as a middle school student.

The program was based around robotics and hands-on activities, she said. She continued on to join a robotics team in high school and then, went to college. In April, UNR’s cyber club took first place in a National Cyber League competition.

Now, Poston isn’t far away from a cybersecurity career. 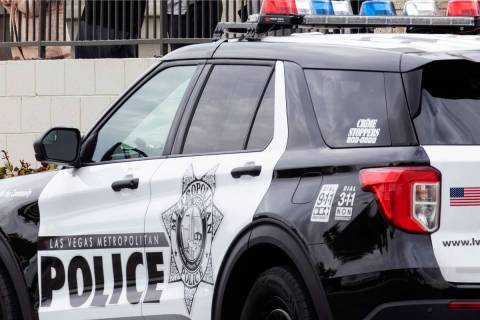 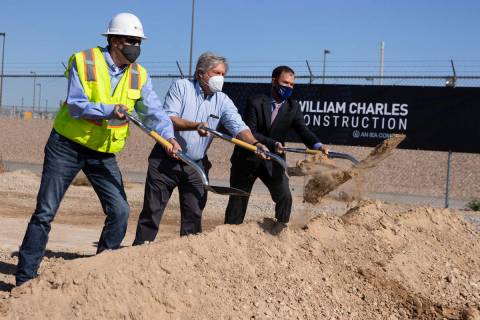 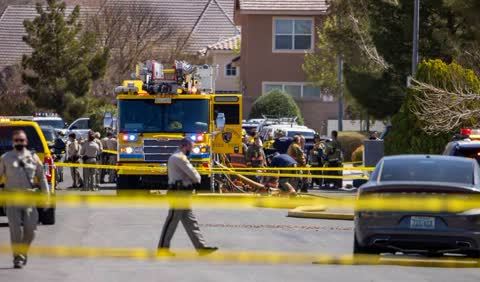 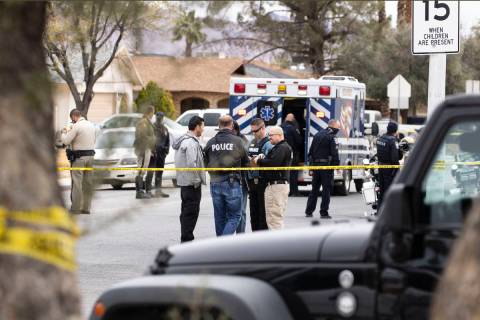