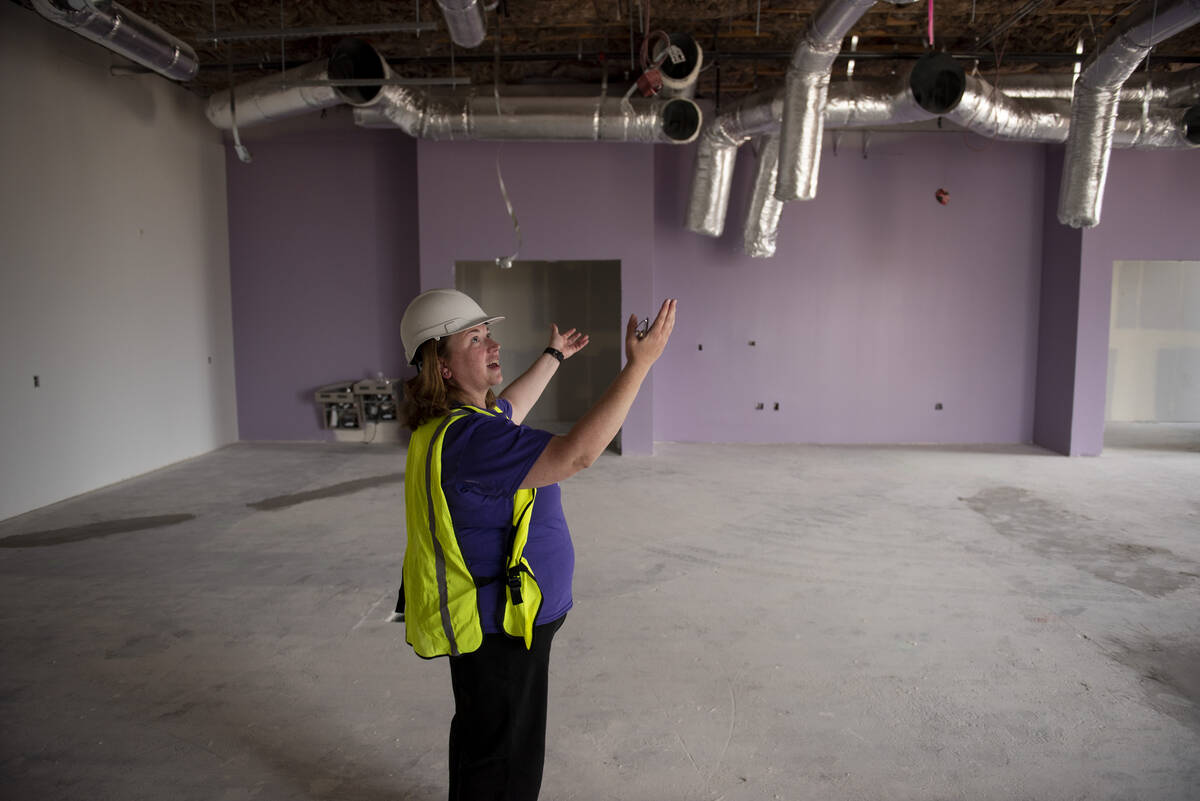 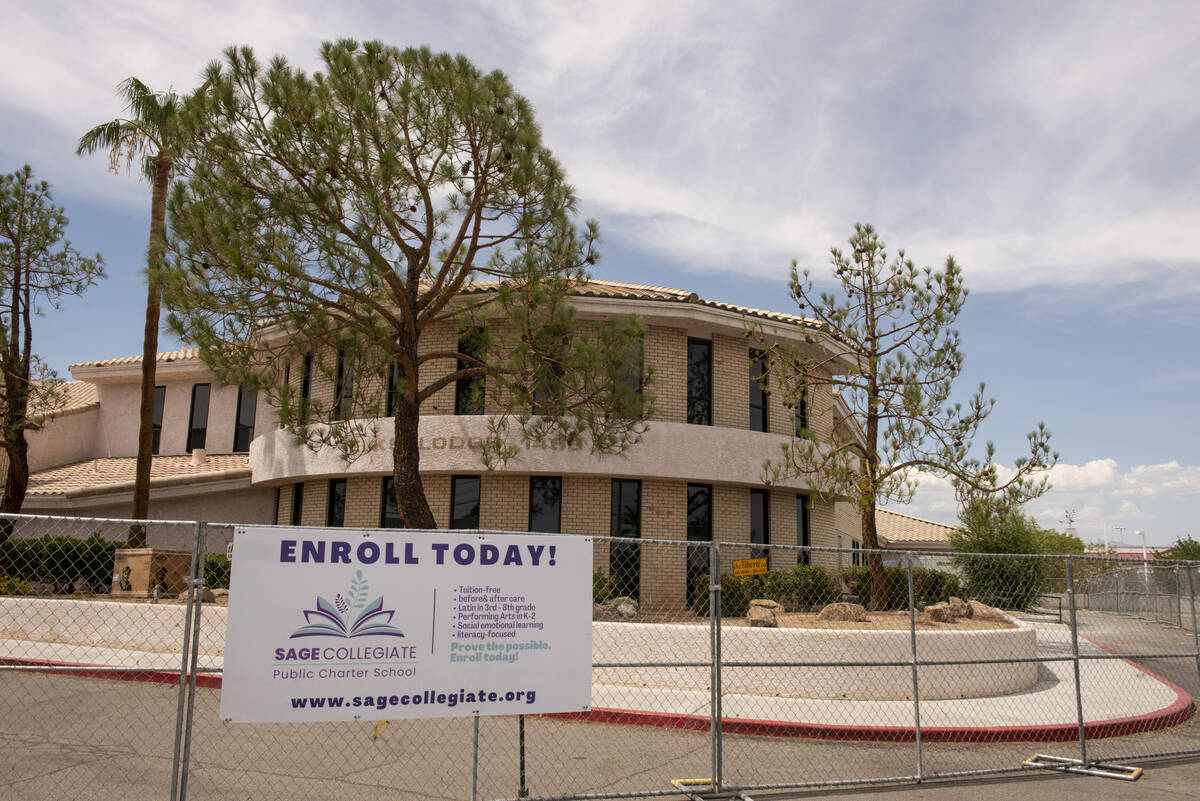 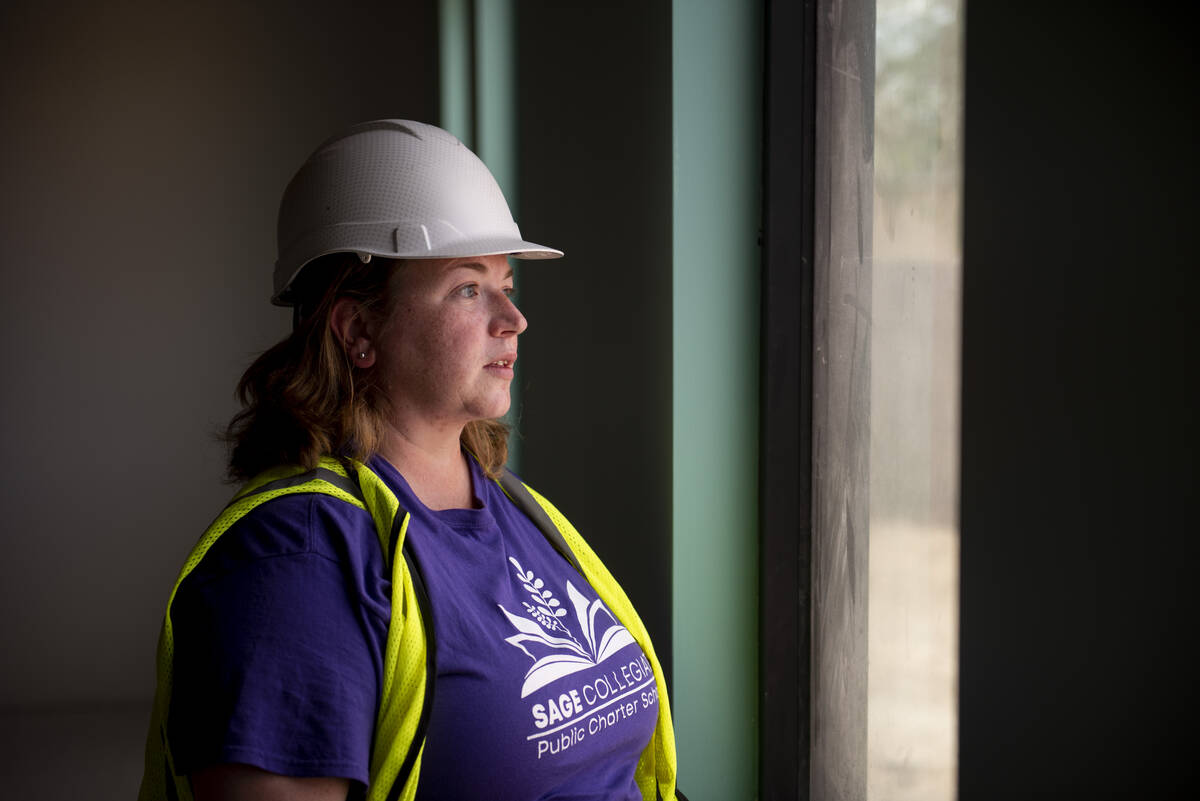 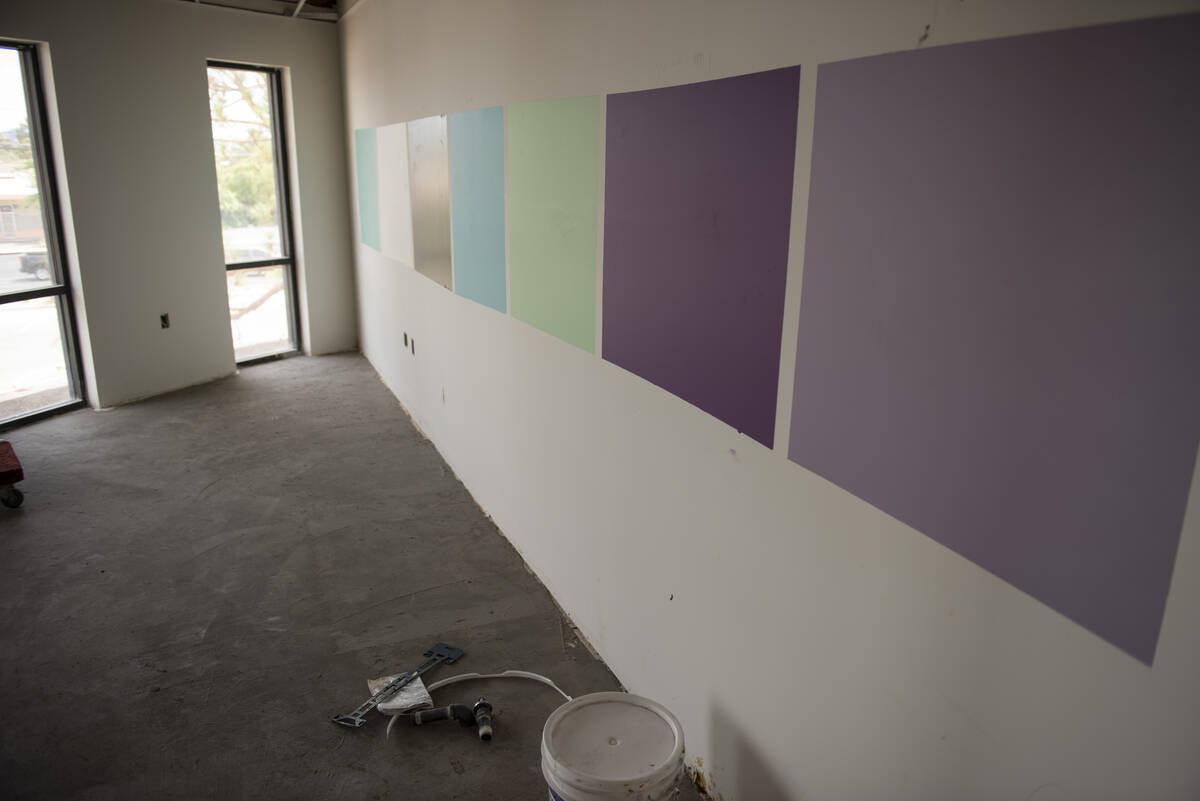 Paint tests on the wall of the under-construction Sage Collegiate Public Charter School on Wednesday, July 20, 2022, in Las Vegas. The new school, a former Elks Lodge, will host students in modular classrooms when the school year starts this fall. (Steel Brooks/Las Vegas Review-Journal) 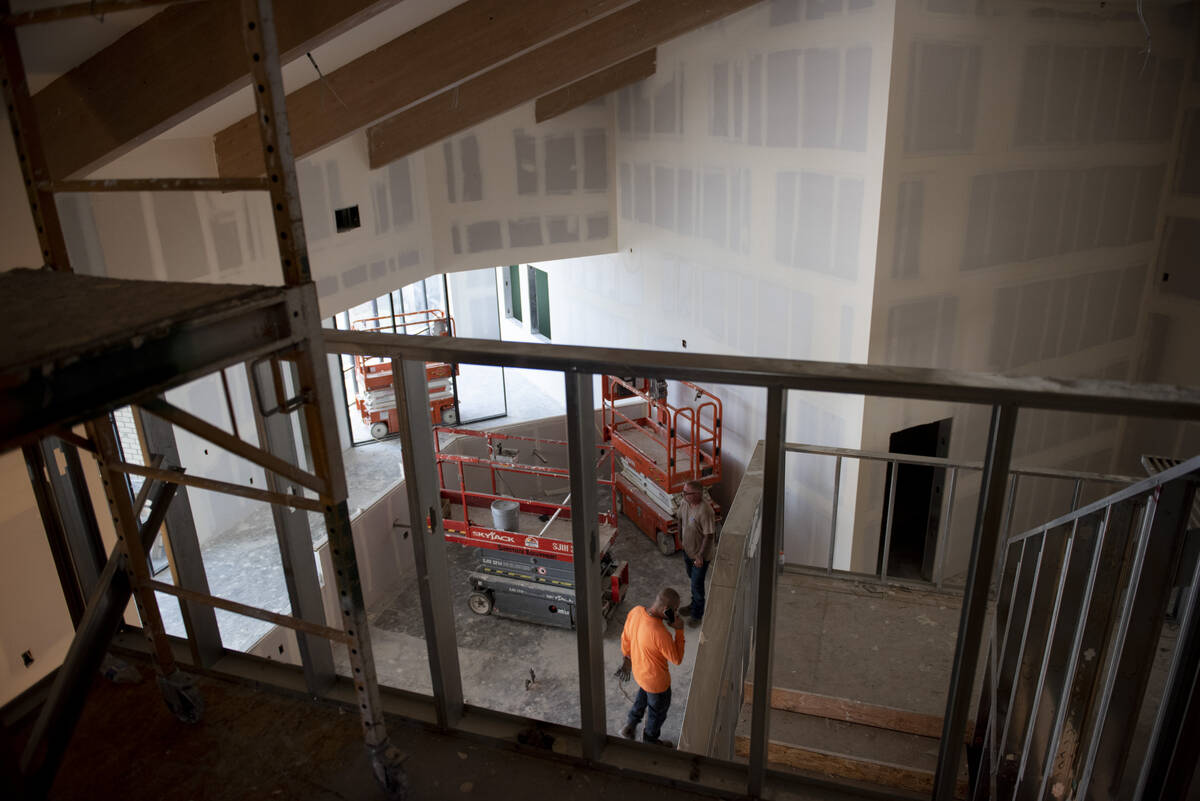 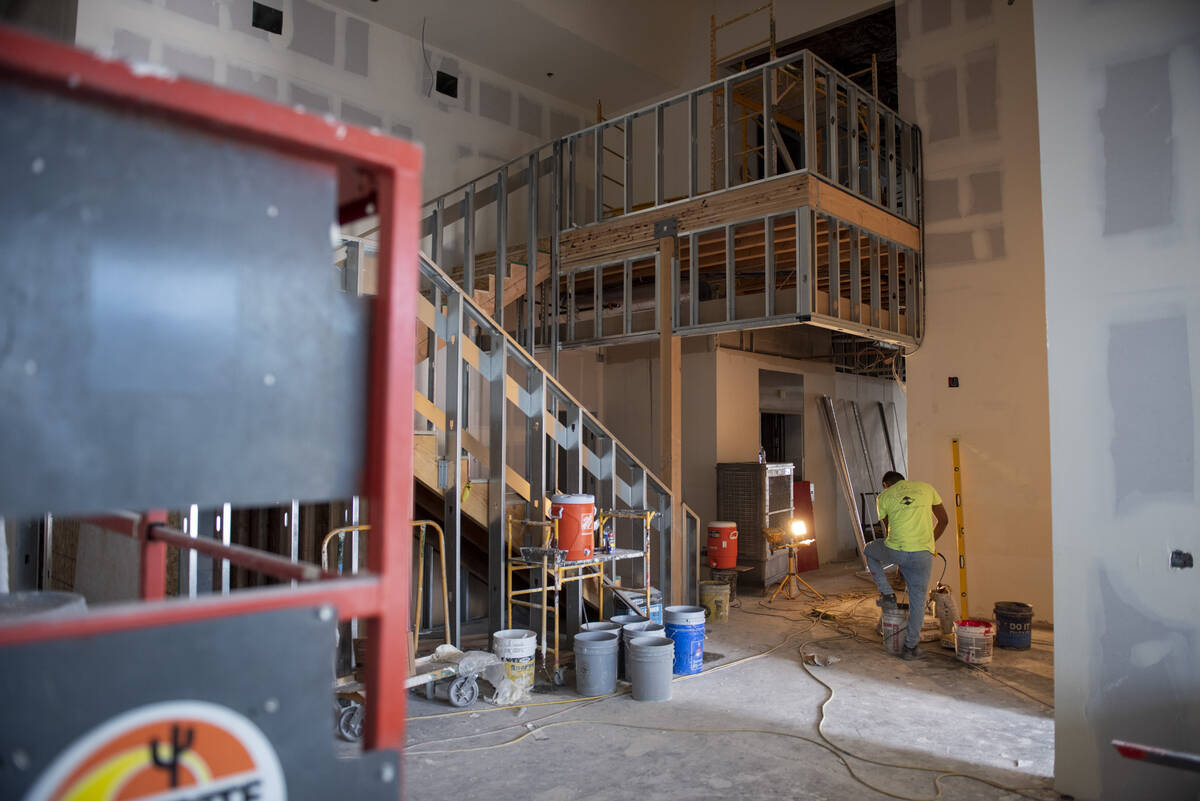 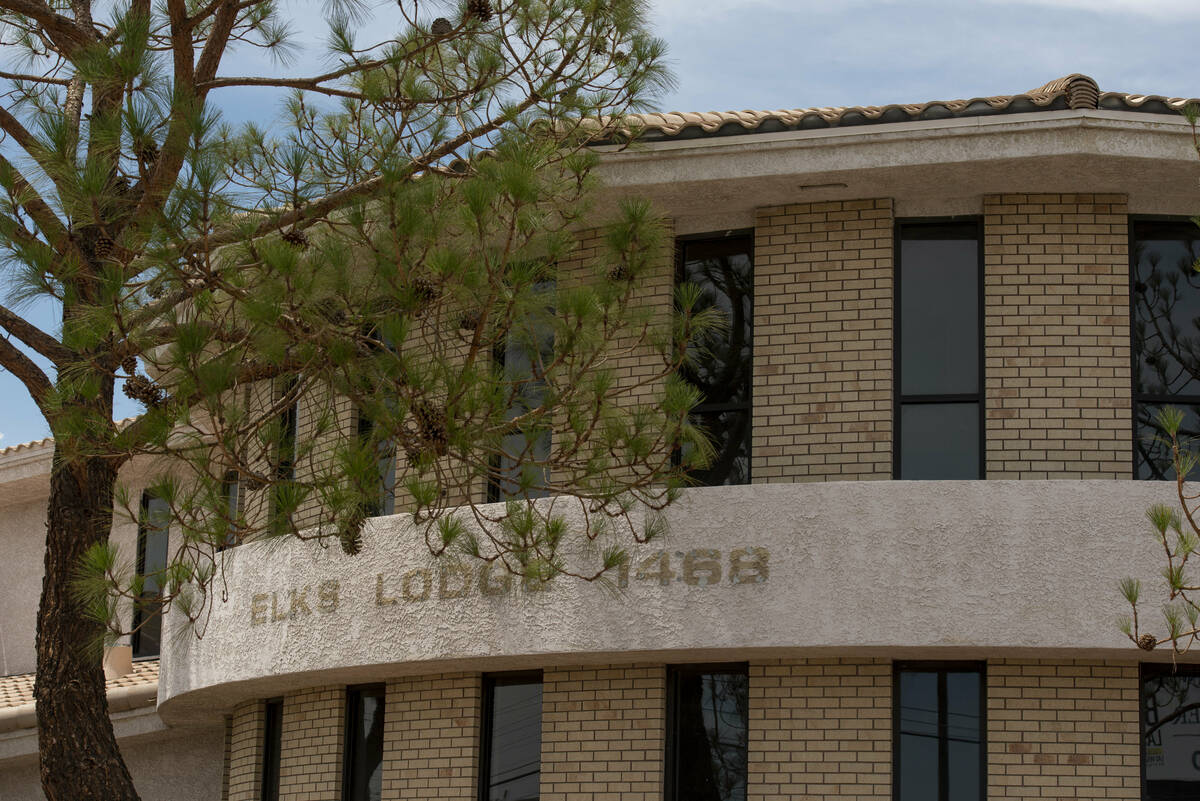 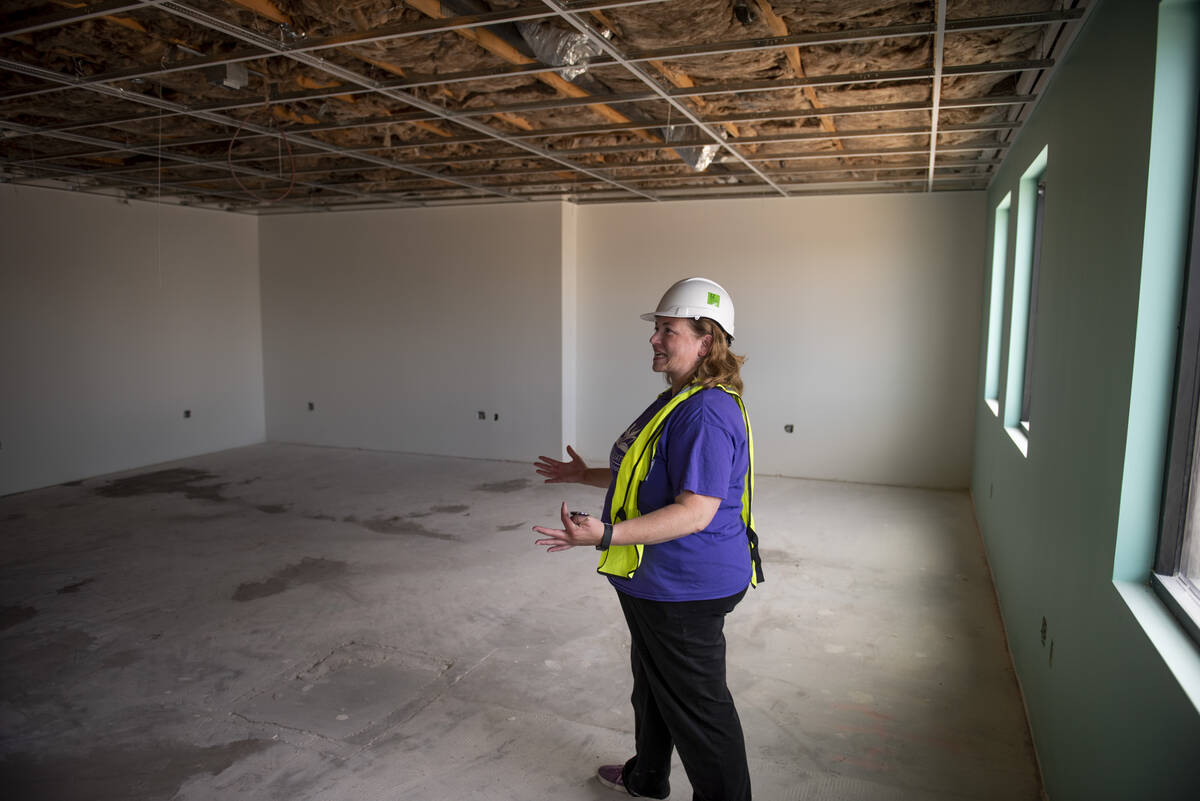 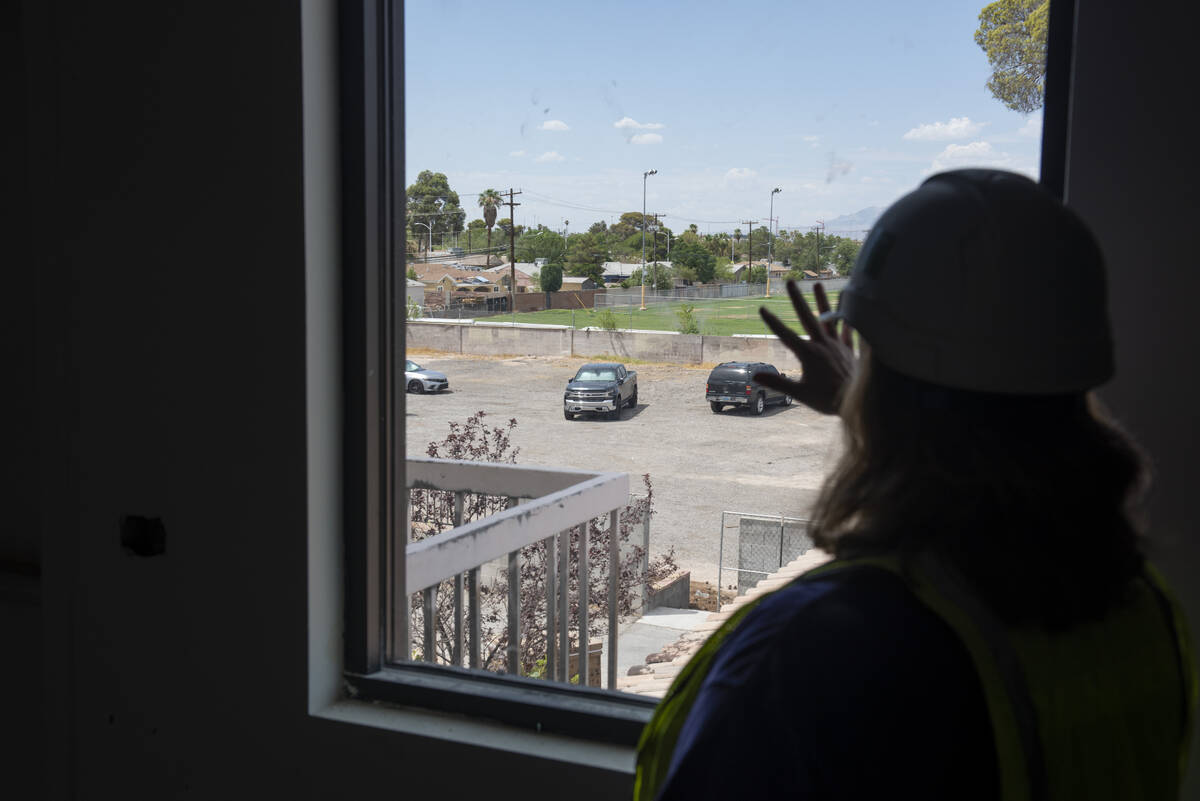 Founder and executive director of Sage Collegiate Public Charter School Sandra Kinne points out where the future second building will be while giving a tour of the new school on Wednesday, July 20, 2022, in Las Vegas. The new school, a former Elks Lodge, will host students in modular classrooms when the school year starts this fall. (Steel Brooks/Las Vegas Review-Journal) 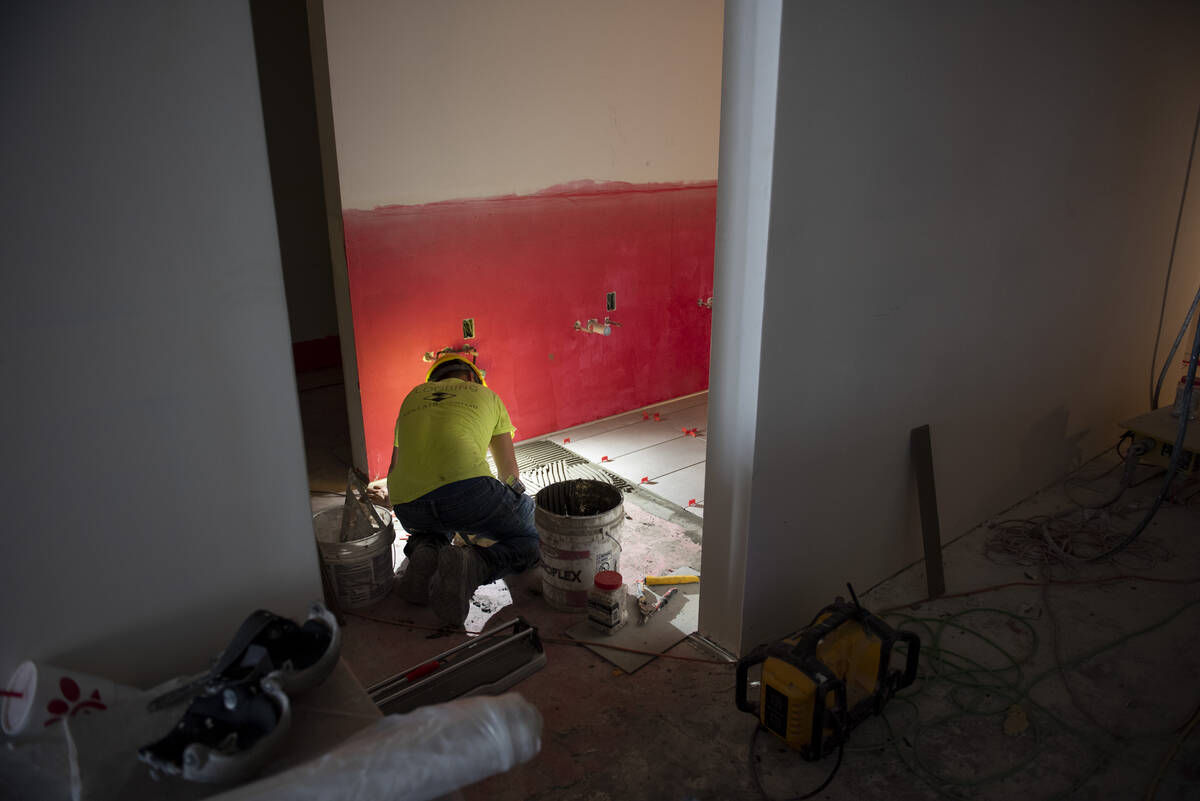 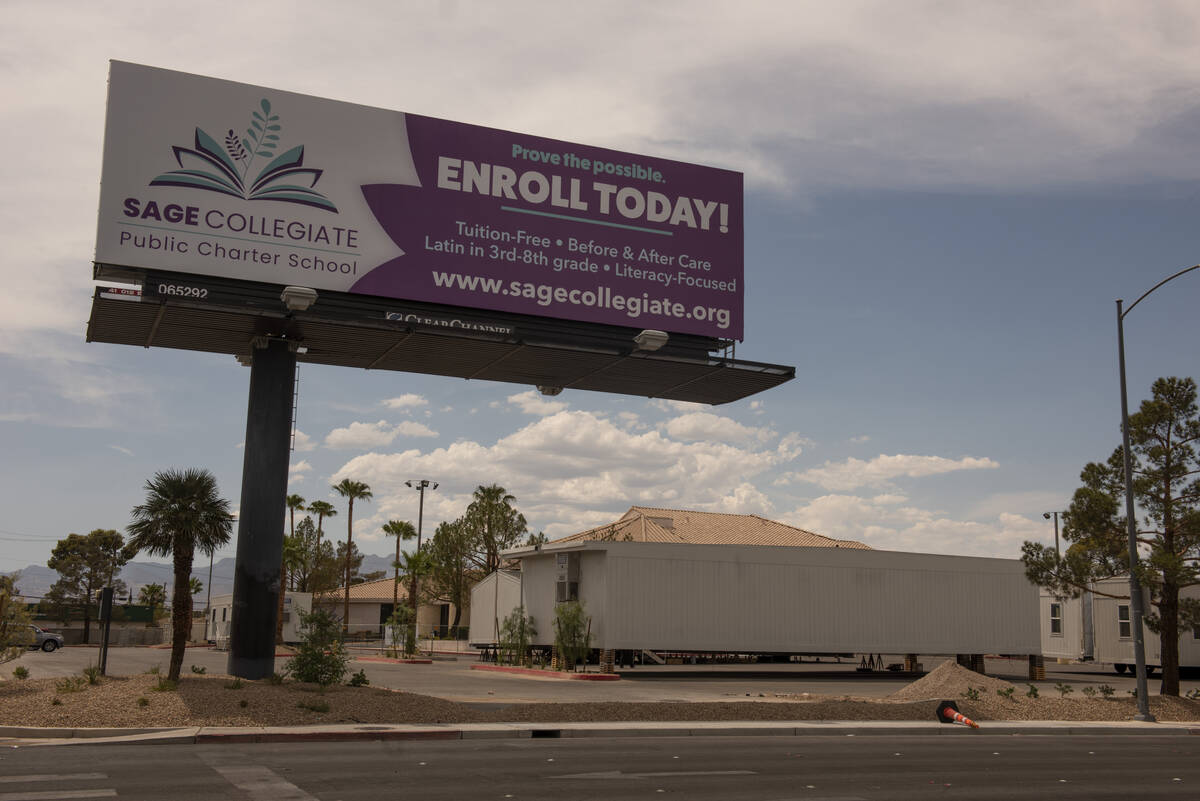 The tuition-free public schools, which receive state funding, were approved by the Nevada State Public Charter School Authority’s board.

They’re open to all students, and if they received more applications than available seats, a random lottery was conducted to determine who got in.

Here’s what the schools are offering:

Battle Born Academy will open with about 150 students in kindergarten, first, fifth and sixth grades in a remodeled former union training center on East Bonanza Road in Las Vegas.

There are still seats available in all four grade levels. The school plans to gradually expand through eighth grade in future years.

Katie Krackhardt, assistant principal and co-founder, said an aim is for the school to be a joyful place where students want to be.

The independent school, which was founded by teachers, has an experienced staff, with the average teacher having nine years of classroom experience and some up to 20 years, said Kathy Rudd, principal and co-founder.

In terms of academics, the school plans to use project-based learning. It allows children to take the lead in exploring a topic that interests them, Rudd said.

The school will have six project exhibition nights throughout the school year where students will showcase their work.

There will also be trauma-informed practices and social-emotional learning curriculum weaved throughout the school day, Krackhardt said.

Teachers are trained on those practices, she said, and are committed to teaching “the whole child.”

PilotED – Cactus Park Elementary will open to about 200 kindergarten through fourth-grade students in a remodeled building on Las Vegas Boulevard North. It’s the second campus in a national network, with the first launched in 2018 in Indianapolis.

The school will eventually expand to include approximately 500 students up through fifth grades.

PilotED – Cactus Park Elementary is putting $13 million into retrofitting and adding onto an existing facility.

“Our whole goal is to make a place where students and adults are excited to come to and feel good being there,” Casto said.

One unusual feature at the school: a cactus garden, as well as a farm with chickens and goats.

“Students will have a chance to apply what they’re learning in class to the farm and garden,” Casto said. “They also use it as a social-emotional learning aid.”

If a student is having a rough day, he or she can go outside and collect eggs, pet a goat or snuggle a chicken, Casto said. “It just helps to reset for the rest of the day.”

Students also will read to chickens and goats — a nonjudgmental audience, she said.

The school will send eggs and produce from its garden home to families, Casto said, and will have a food pantry.

Casto said the school will have a “robust” 1,100-square-foot teachers lounge known as “the oasis” and also will provide them with a yearly recreation stipend.

“Teachers should be treated like the professionals they are,” she said.

As for instruction, the school’s model focuses on identity development, Casto said, to help students understand themselves and the world around them. That will include conversations around topics such as race, gender, ethnicity and socioeconomic status.

Data shows that when children see themselves — particularly in books and stories — they do better, board member Sheila Weathers said.

Schools are often heavily focused on academics and achievement, she said, and “I think they forget about the balance that kids need.”

Sage Collegiate Public Charter School, an independent school, was originally slated to open in August 2021. But it got state approval to push its opening date to this August instead due to low enrollment numbers, challenges securing a facility and COVID-19 pandemic-related impacts.

Now, the school has more than 240 students in kindergarten through fifth grades and a waiting list.

Eventually, the school plans to expand up through eighth grade and add more classes per grade level.

The school will open in a former Elks Lodge on West Charleston Boulevard that’s being renovated. In its fourth year, the school plans to construct a second building on a back parcel as enrollment expands.

Sage Collegiate pushed its start date one week later to Aug. 15. There’s a manufacturing production delay on a single piece for air conditioners, and the school will be in modulars on campus for a few weeks.

“The delay is incredibly disappointing, but we’re excited we’ll be able to be on our campus and are excited to have a fully renovated — and well air conditioned — space in a few weeks,” she said in an email to the Las Vegas Review-Journal.

Reading is the foundation for all of the subjects in school and everything in life, she said, also noting that a low percentage of Clark County students are reading at or above grade level.

Students in third grade and above will learn Latin.

The school will have an extended day, with students arriving on campus between 7:30 a.m. and 7:45 a.m. and being dismissed at 3:45 p.m. That will allow more time for reading and math, as well as physical education every day, Kinne said.

The campus is near the Heinrich YMCA and Springs Preserve, which have become strong partners, she said. The YMCA will offer before- and after-school care at the school.

Strong Start Academy is the first public charter school in Nevada sponsored by a local municipality — the city of Las Vegas. It builds on the city’s already existing preschool program.

The school is expecting about 180 students in kindergarten through second grades.

The school will eventually expand through fifth grade in future years.

Originally, the charter school was going to operate in three existing city preschool facilities for its inaugural year.

“But then, the city was able to actually locate a building that was already a school previously, and it actually lent itself perfectly for the whole school to be at one site,” Benitez said.

The school is on South Ninth Street in downtown Las Vegas and was formerly home to 9th Bridge School, which closed.

Benitez said the building was previously extensively renovated and has “lots of modern features,” so Strong Start Academy didn’t need to do any remodeling.

Second graders will have Spanish enrichment during the last hour of their day, Benitez said, but it won’t be at the 50-50 level.

Research has shown it’s not recommended to have children start in a dual language immersion program later than first grade, if they haven’t previously been in one, she said.

The school also wants to offer classes for parents, such as English and Spanish.

“We want to make sure we’re constantly offering just different activities or services for the community so that we can have heightened family engagement opportunities and really get the families involved and into our school,” Benitez said.

Young Women’s Leadership Academy of Las Vegas — an affiliate of New York-based Student Leadership Network — will open with about 110 sixth and ninth graders in a leased facility on South Mojave Road in east Las Vegas.

There’s a waiting list in ninth grade and only a few seats still open in sixth grade. The school will gradually expand up through 12th grade.

The school is the first to be “adopted” by a Las Vegas gaming company, Las Vegas Sands Corp.

The corporation will provide students with “technology access, donations for facility improvements, furniture, and school equipment,” according to a February news release from the school, as well as “special programs such as internships and shadowing opportunities with experts in their field.”

As for the school’s focus, “we teach our scholars using the whole girl education model,” founding Principal Whitney McIntosh said.

The school will have an environment where students feel empowered to succeed in science, technology and math, McIntosh said.

Students will have access to a college-bound initiatives coordinator and an advisory block where they’ll lean into their health and wellness, McIntosh said.

And students will have a role in creating activities and traditions at their new school.

“We’re using the first part of the school year to build a culture where our scholars get to make an imprint on their campus,” McIntosh said.