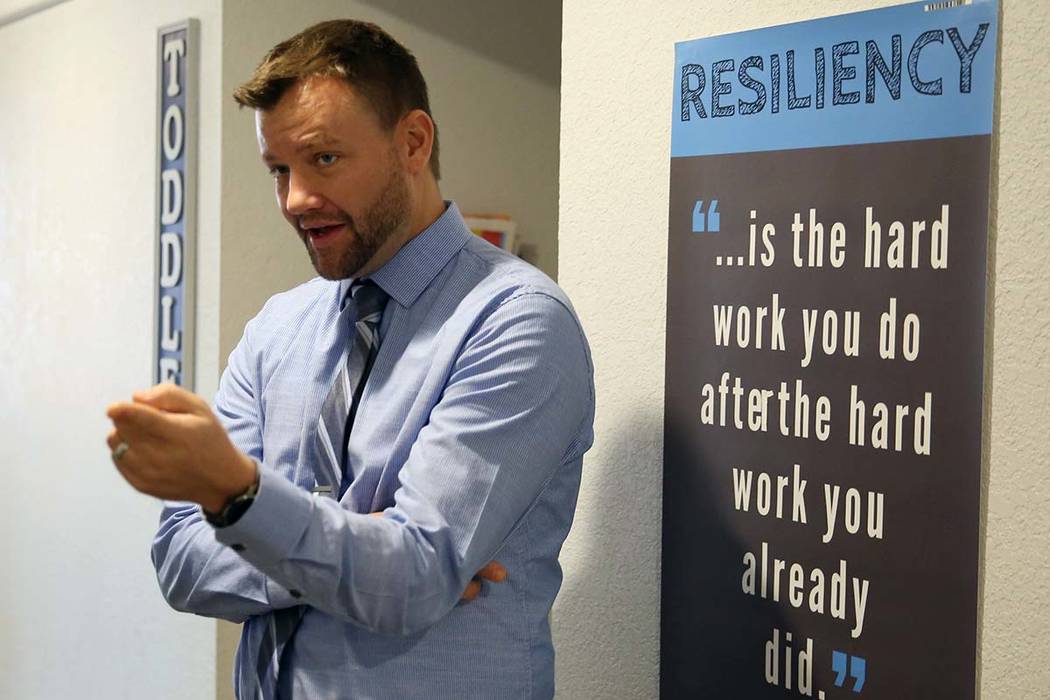 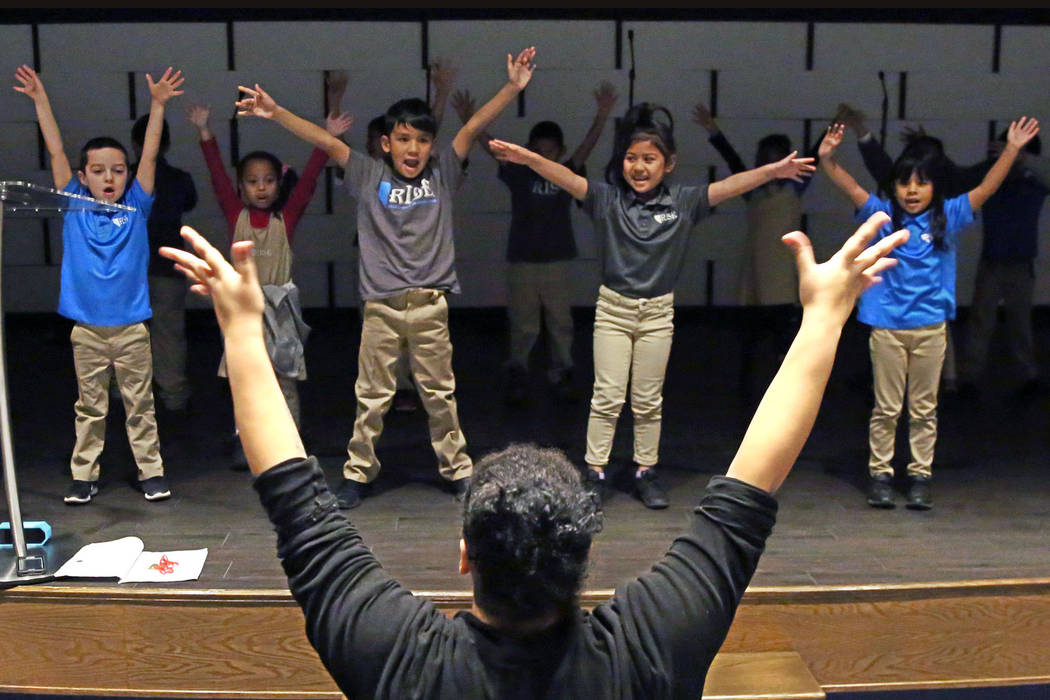 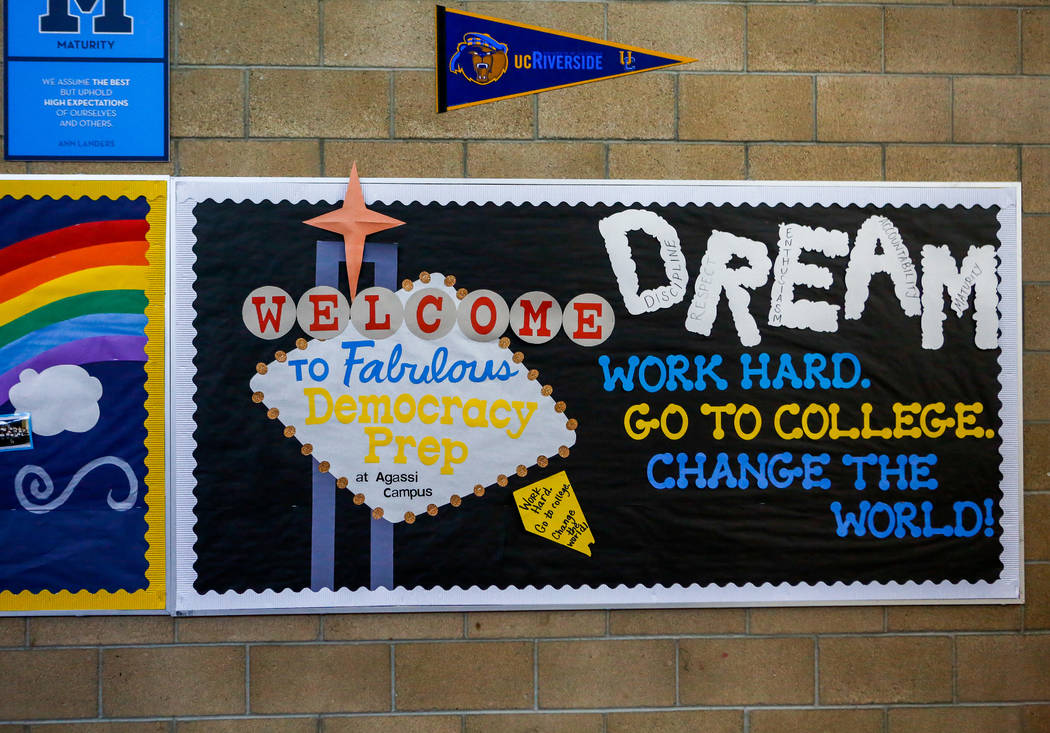 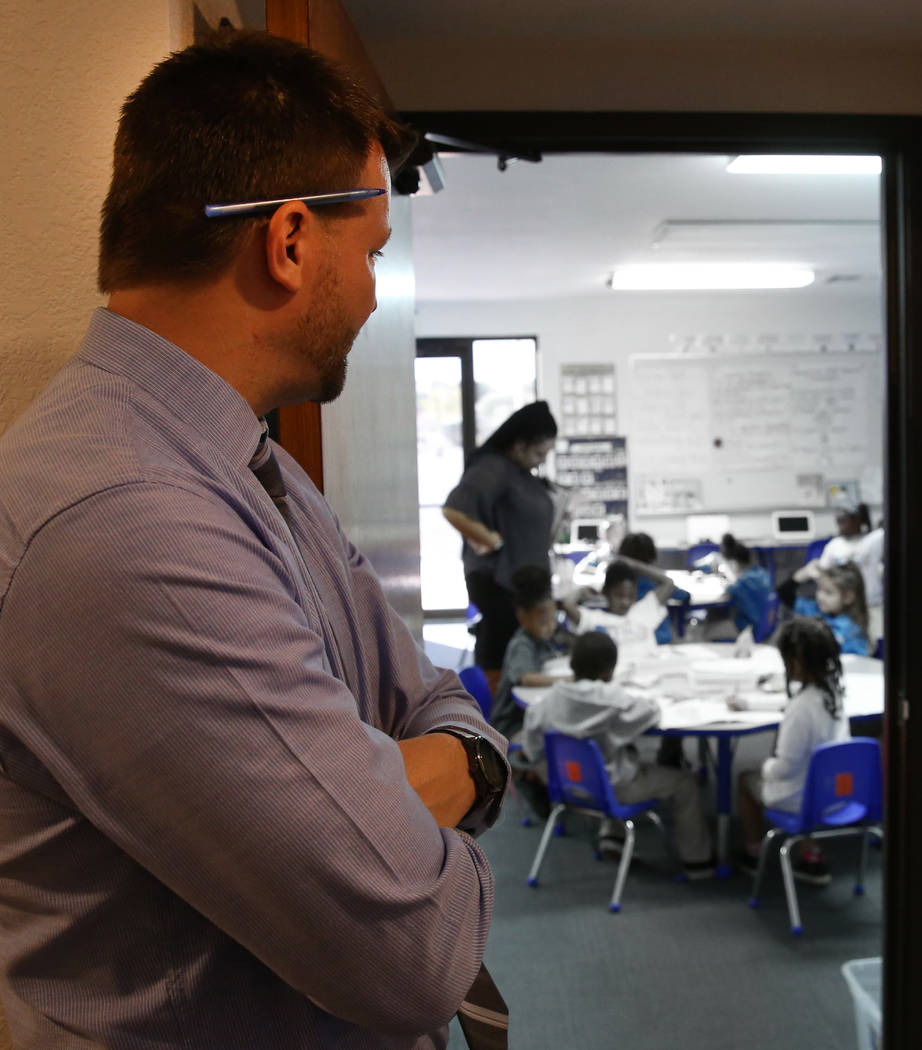 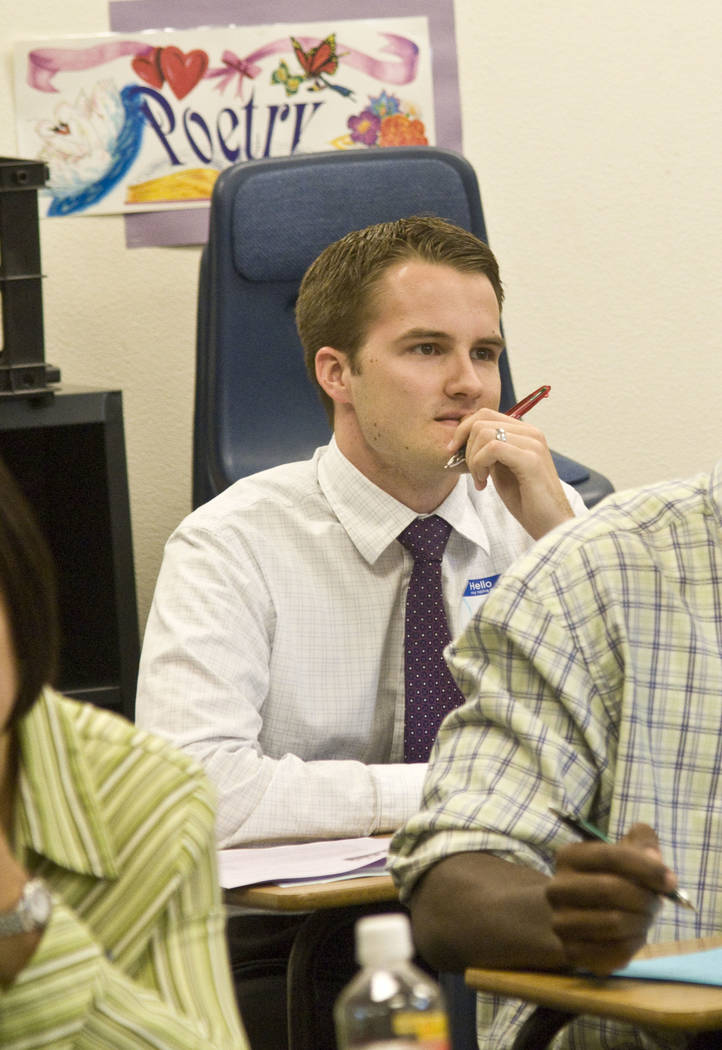 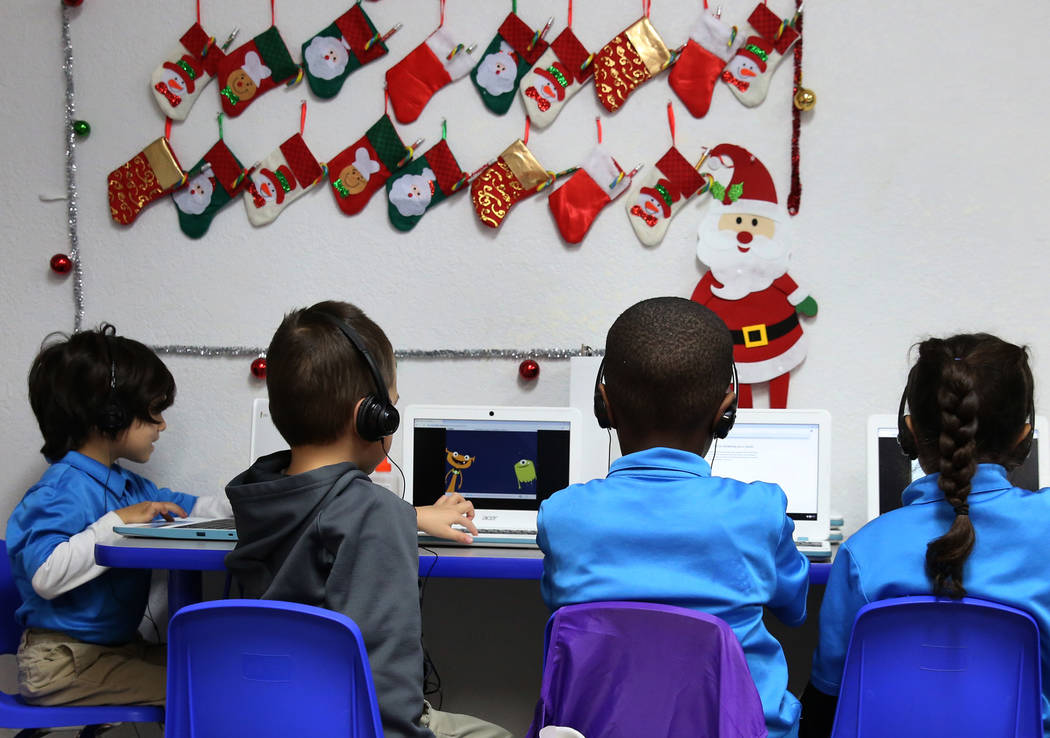 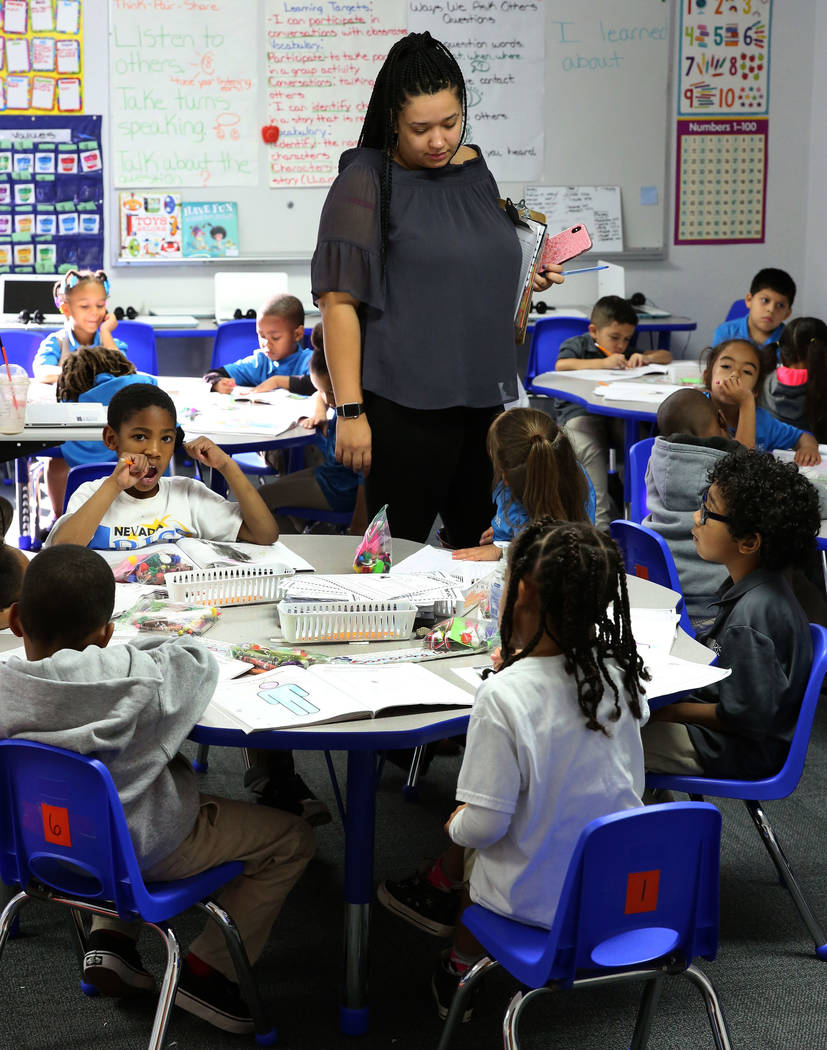 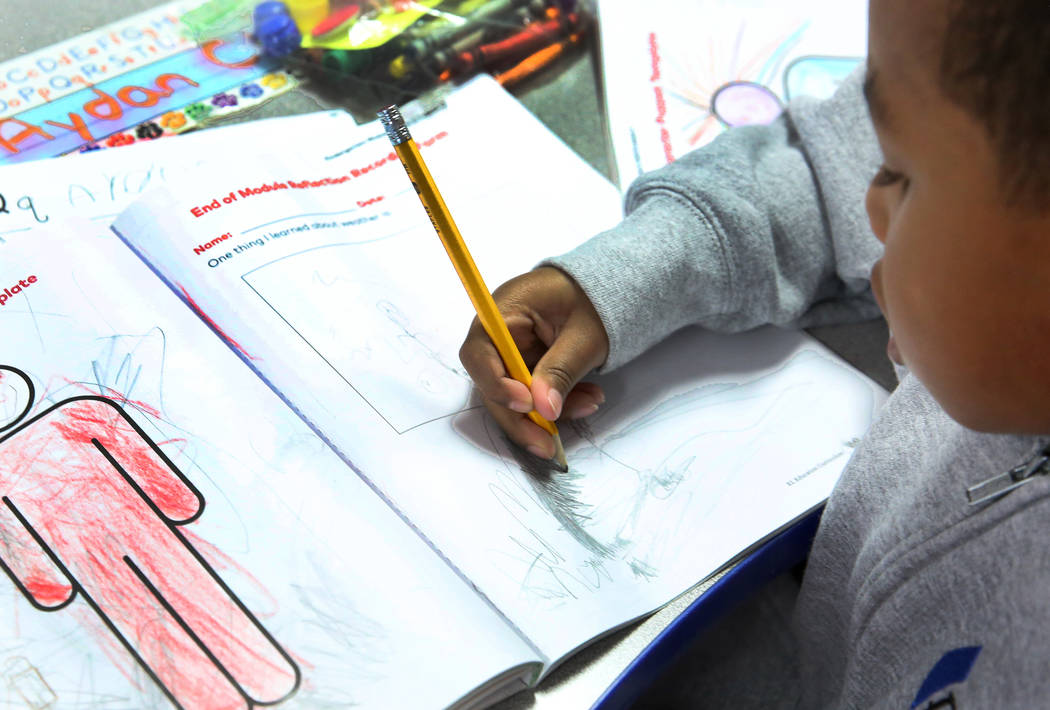 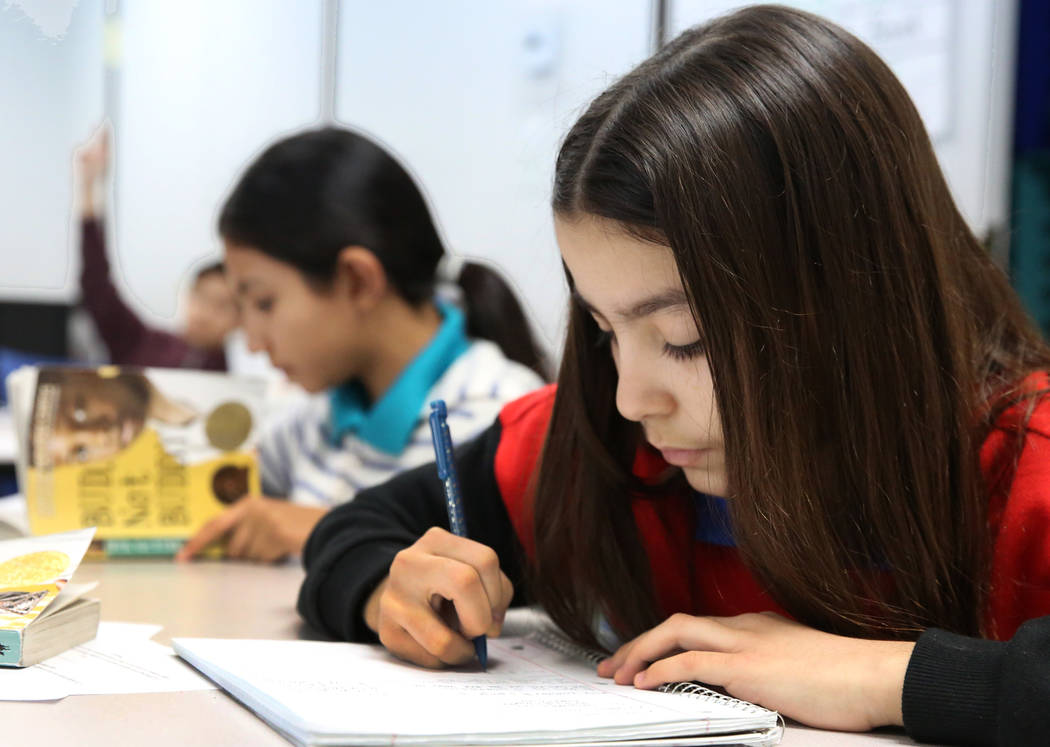 “Good morning, Michigan,” teacher Lesleigh Valette shouts to a group of elementary students who greet her back in unison.

Classes are labeled after colleges at Nevada Rise Academy, fitting nomenclature for a school with the slogan “the path to college begins in kindergarten.”

The charter school is one of two that opened this year as part of the Achievement School District, the state’s initiative that uses charters to fix academically underperforming schools and neighborhoods.

Nevada Rise, which serves kindergarten and first-grade students, occupies the same Paradise Church building in the Winchester area of Las Vegas as Nevada Prep, which has fifth and sixth grades. Both schools, which have about 120 students each, hope to add classes each year and run up through eighth grade.

Meanwhile, the other two achievement district schools — Futuro Academy and Democracy Prep at the Agassi Campus — are settling into their second year as ASD schools.

It’s a slow but steady growth for the achievement district, which faced public backlash when it was initiated in 2016.

“Obviously, I understand some of the challenges in the first year,” Achievement School District Director Rebecca Feiden said. “But these schools are adding to the options that parents and families have in their communities.”

Underperforming schools tapped for achievement district intervention face two options: competition from a new charter school that opens nearby or a complete takeover by a charter operator.

Democracy Prep, a charter formerly known as Agassi Prep, is the only school to adopt the takeover model.

Because achievement district schools are in their early stages, it’s hard to measure their success.

Futuro Academy, which opened as a competitor to Cambeiro Elementary, has no testing data yet because it serves only kindergarten through second grade, when students are not required to take the standardized state test.

And although Cambeiro improved its state ranking, jumping from one to three stars from 2017 to 2018, Futuro Executive Director Ignacio Prado doesn’t solely credit that to the competition introduced by his school.

“To be honest with you, it’s really hard to know what the factors or variables are without really knowing or understanding what exactly they did,” he said.

While the academic improvement at Futuro can’t be measured by the state Smarter Balanced test, there are positive signals. The school retained 100 percent of its staff from last year and has grown from 105 students to about 260, Prado said.

Democracy Prep data, meanwhile, show that the school has vastly improved in English and math in its middle grades but is still below the Clark County School District average in its elementary proficiency rates.

Adam Johnson, the school’s executive director, is hoping to fix that by setting aside 40 minutes every school day to assist students who need help and by teaching computer skills on Saturdays so students can become more familiar with taking the test itself.

“What we had was a focus this year on how do we improve the places we know where we are weakest,” he said. “We had a really good baseline set of data, so that allows us to go in a little bit further and laser focus in on the areas that we need to grow in.”

Johnson acknowledges the school has struggled to keep staff but noted that over 85 percent of students returned this year.

We want great schools for all families. And if that’s a charter or a district school we’re all on board with whoever gives parents what they need.

Justin Brecht and David Blodgett founded Nevada Rise and Nevada Prep, respectively, after stints in Teach for America and at schools in the Clark County School District.

Opening competing schools in financially challenged communities can be a touchy subject.

Both schools give priority to students from Hal Smith Elementary and Mack Middle School, but students from other schools may attend.

The Clark County School District did not respond to a request to speak to officials at those schools about the impact the new charters have had on their funding and student bodies.

Blodgett said he and his staff try to be respectful in the way they talk to and about other schools. The conversation is more nuanced than labeling district schools as bad and charters as good, he said.

“We want great schools for all families,” he said, “And if that’s a charter or a district school, we’re all on board with whoever gives parents what they need.”

Brecht hopes to focus his students on college. Blodgett aims to graduate future eighth-graders armed with knowledge about their high-school options.

With grassroots recruiting efforts, they were able to attract parents such as Maria Salazar, a former Clark County School District bus driver who now drives for Nevada Prep.

The job is better than the stressful one in the district that left her feeling unappreciated, she said.

Her twin sons also enjoy the sixth grade, including one who struggled at Martin Luther King Elementary.