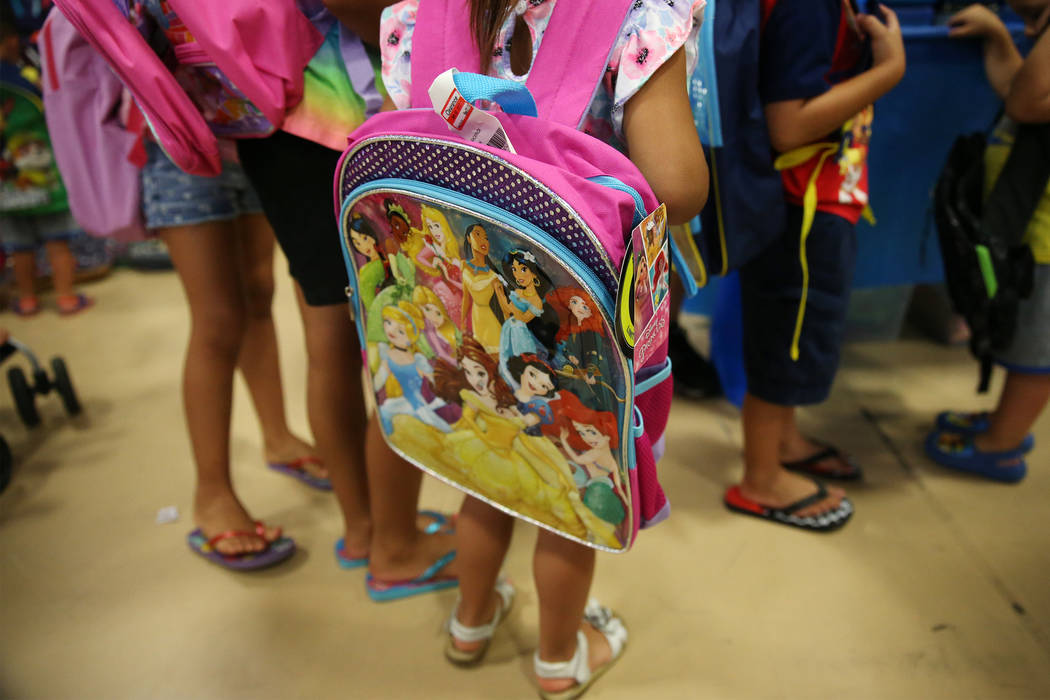 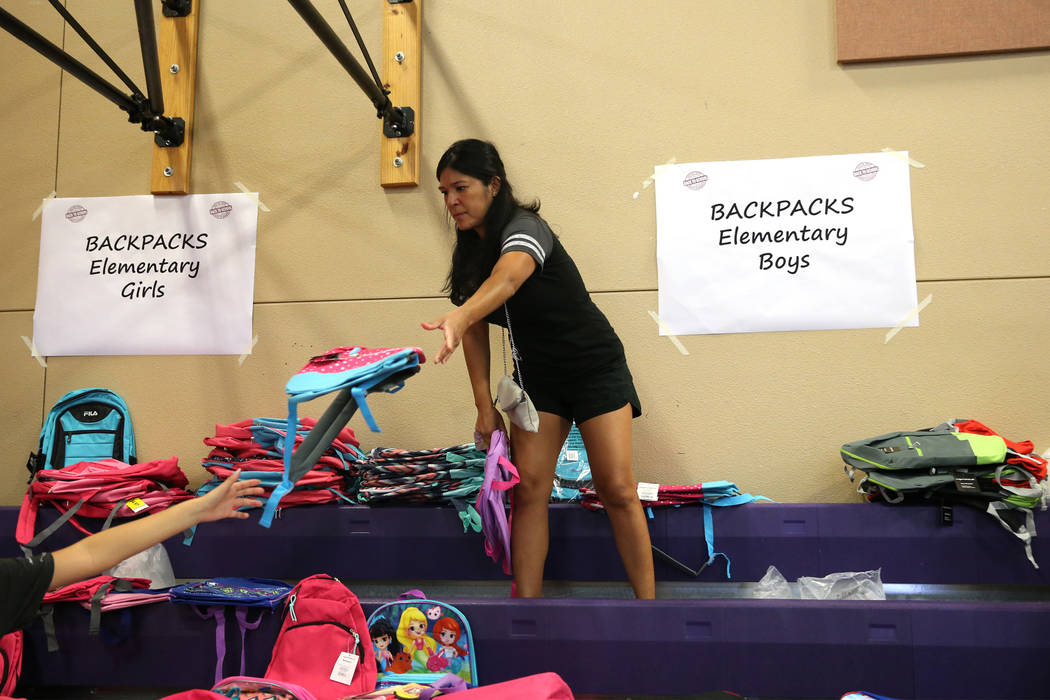 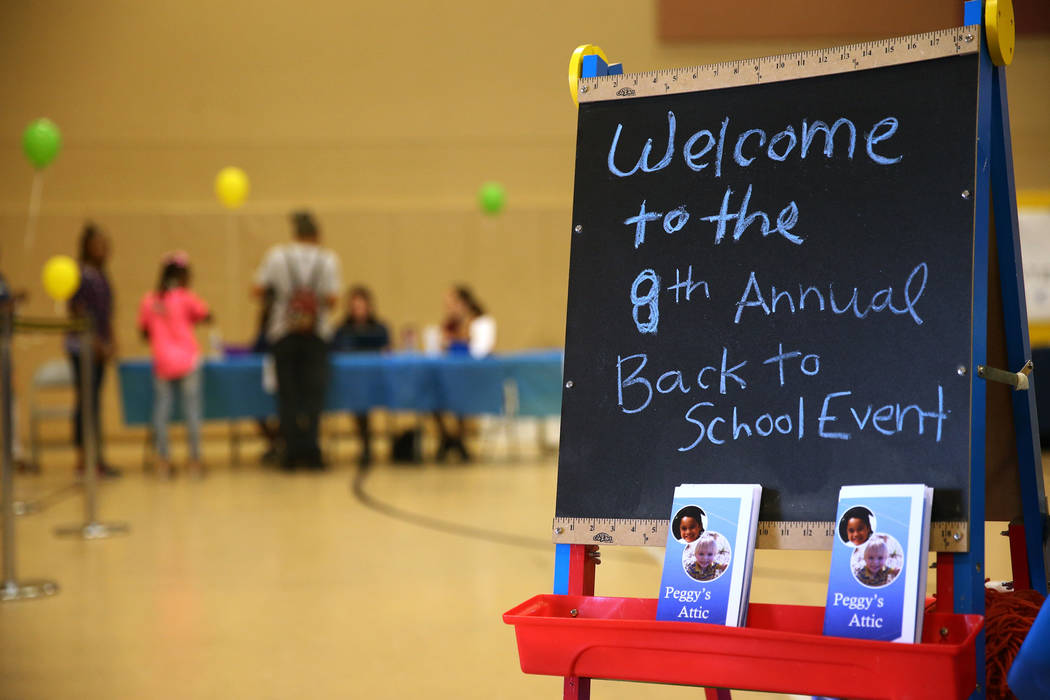 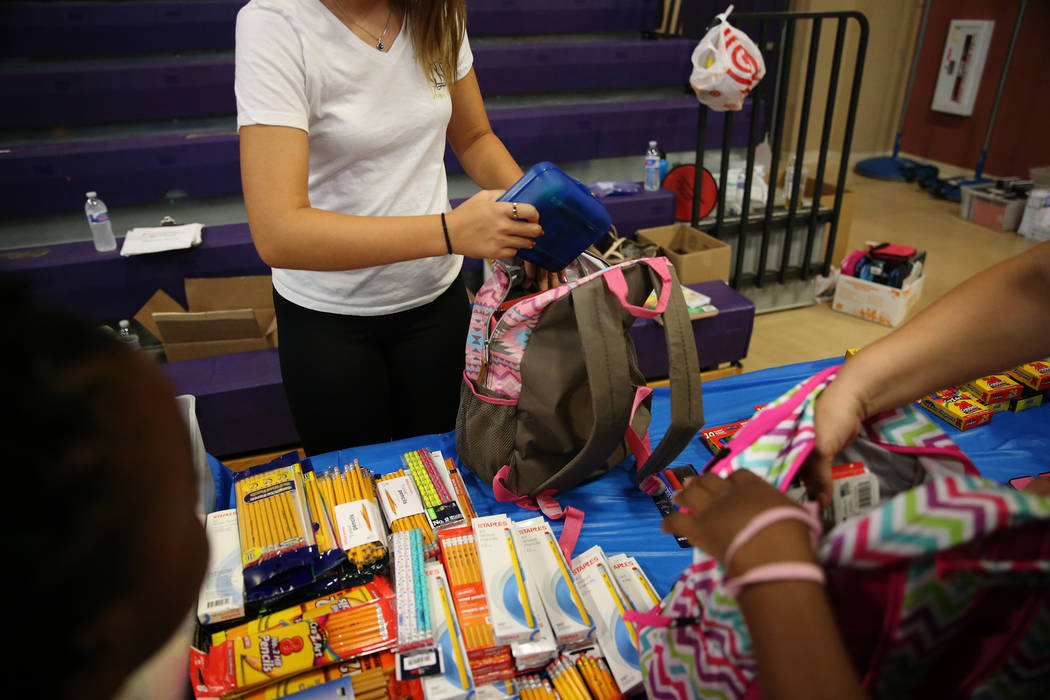 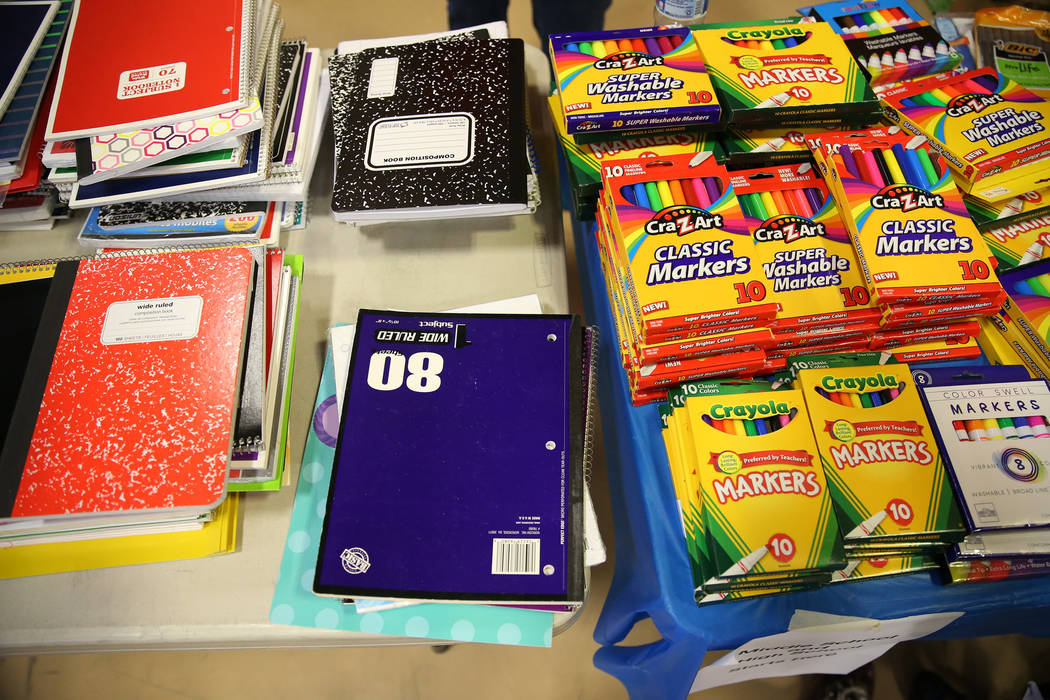 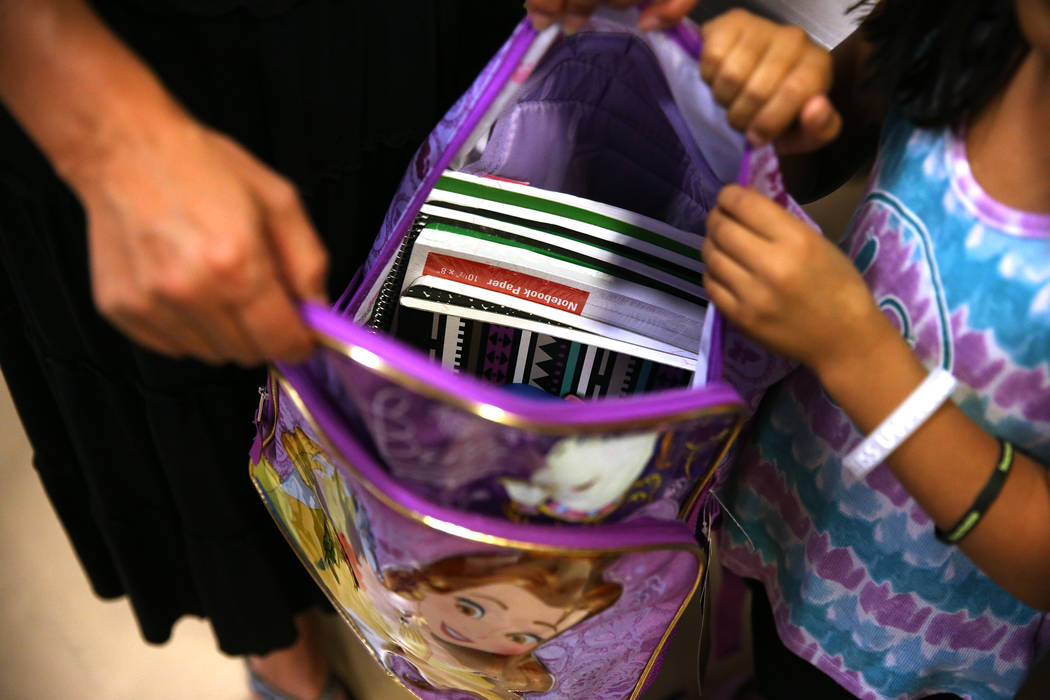 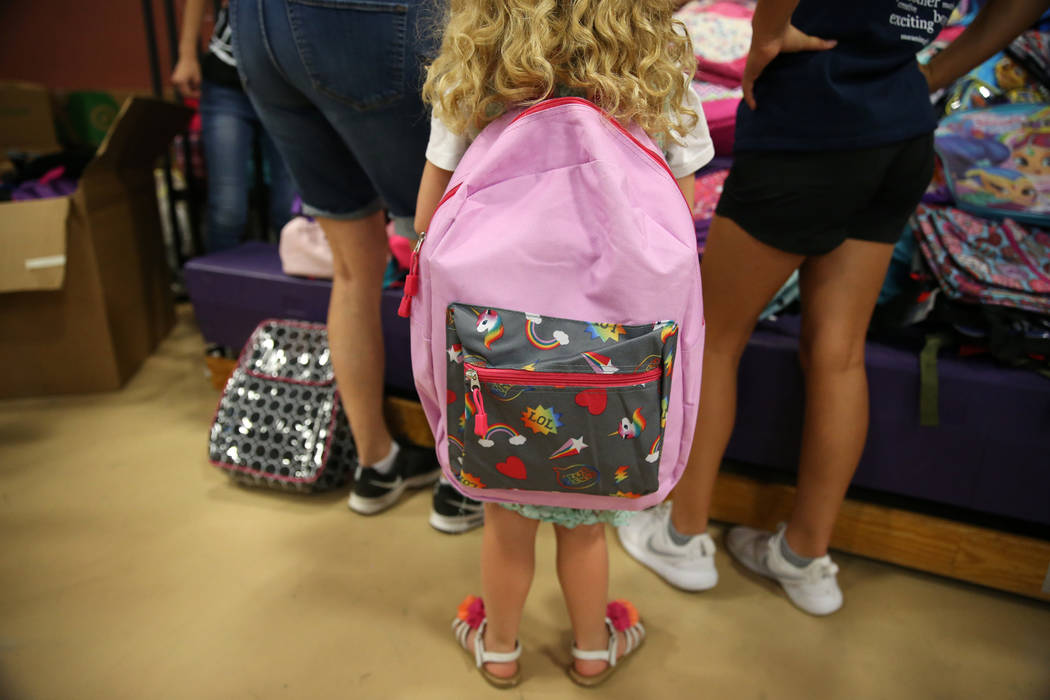 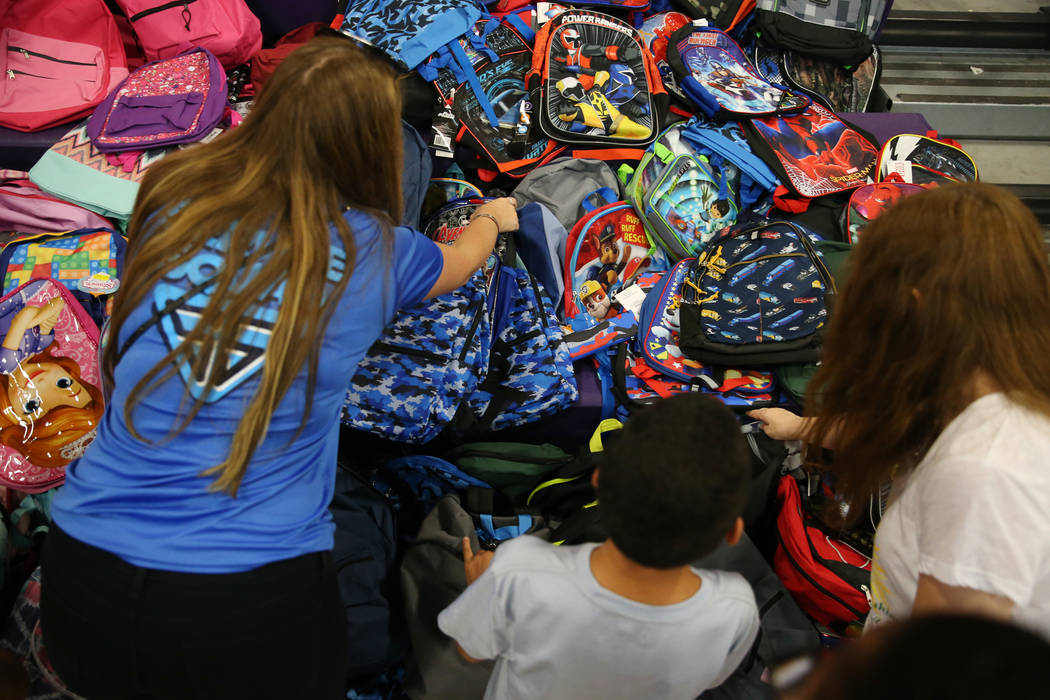 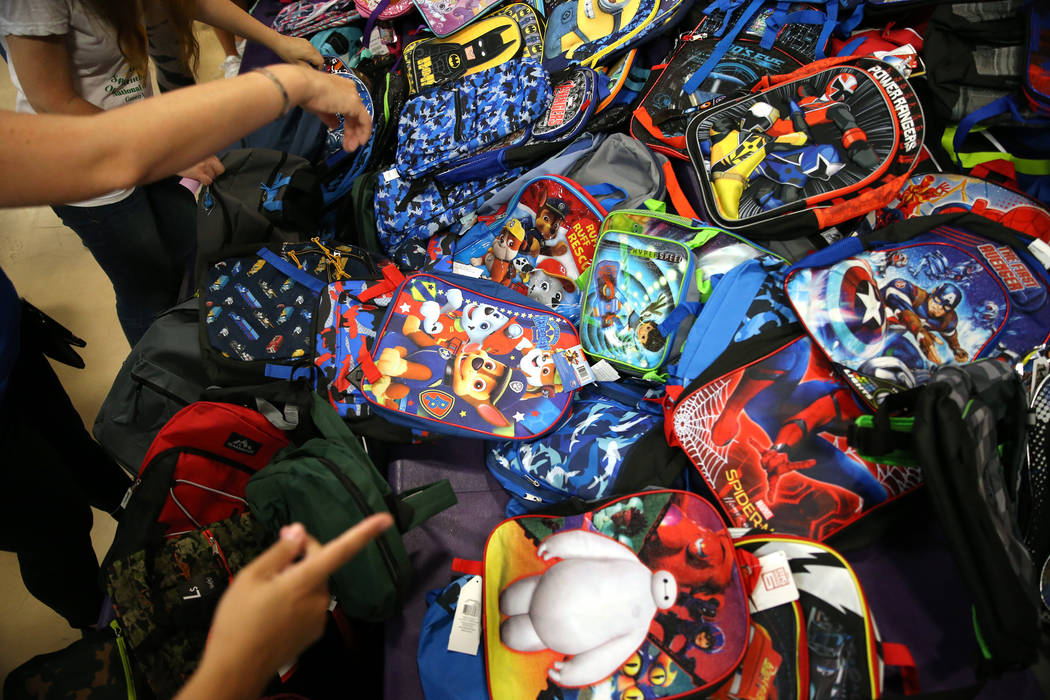 Denise Gates watched as her 6-year-old foster daughter grabbed pencils, pens and notebooks Thursday and stuffed them into a new “Beauty and the Beast” themed backpack as her brothers ran in circles around the baby stroller by her husband’s side.

“As a foster parent, we don’t get much reimbursement,” Gates said of the financial difficulty she and her husband face making sure the girl and her older brother are equipped for school.

About 3,200 children in Clark County fall into protective custody, with 44 percent in kinship care, where their guardian is a relative or family friend, and 33 percent in foster care.

For Gates, an early childhood special education teacher, and her husband, taking care of three out of those 3,200 was their way of bringing children into their lives and giving back to the community.

“Our house went from zero to three kids overnight,” she said, adding that since then she’s also given birth to a baby boy.

Gates said she plans to soon adopt all three foster children — the girl and her brothers, who are 7 and 3. (The groups behind the giveaway asked that the children not be identified to protect their privacy.)

Foster parents in Clark County receive a monthly reimbursement based on children’s ages and medical needs.

The basic reimbursements are about $683 for children up to 12 and about $773 for older children.

Rosenstein said caregivers who were unable to pick up supplies Thursday can still obtain them from Peggy’s Attic at 701 N. Pecos Road in Las Vegas. Case managers will also pick up leftover supplies next week to distribute to families that need them.

“Everything is from the community, partners that we have and just people coming in and wanting to make a donation,” said Rosenstein, who opened Peggy’s Attic in 2001. “It takes a community to raise our kids.”

Rosenstein, 61, also brings her work home with her in a different way. Since her four children grew up, she has raised 52 foster children over the past 15 years and adopted 10 of them.

“I kind of see all the different angles,” she said.

“The foster system is so necessary, unfortunately,” said “Chi-Town,” the events coordinator for the group’s Nevada chapter, which supports child abuse victims by offering a friendly, protective presence in their lives. Members of the organization use their “biker names” to protect themselves.

She said events like Thursday’s giveaway also help caregivers in ways they may not have even considered.

“It’s a good thing to do for the children, let them know people do care,” she said.