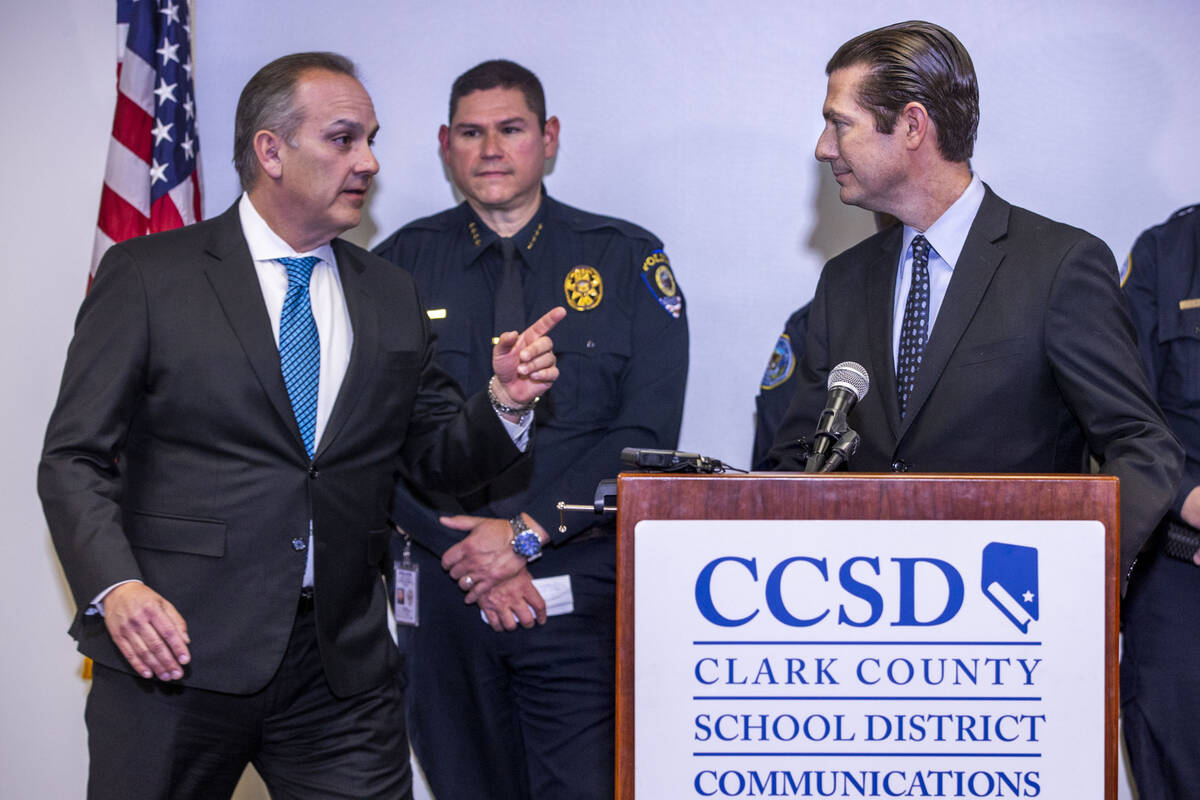 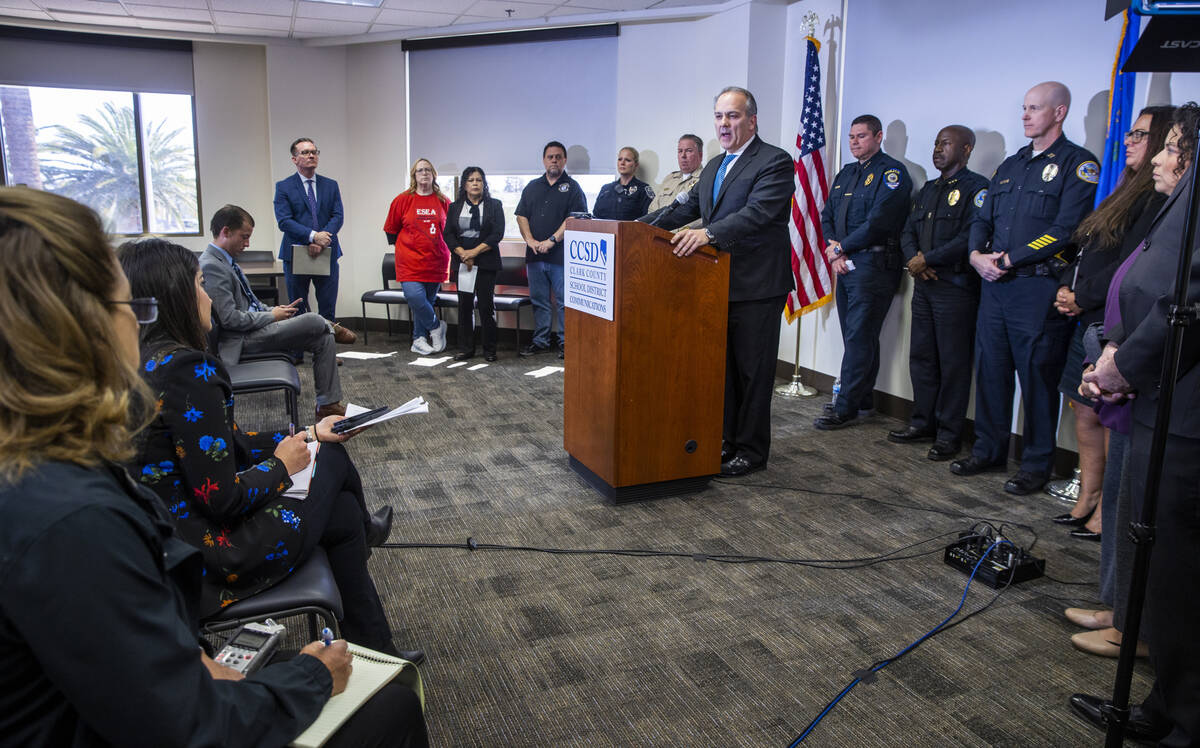 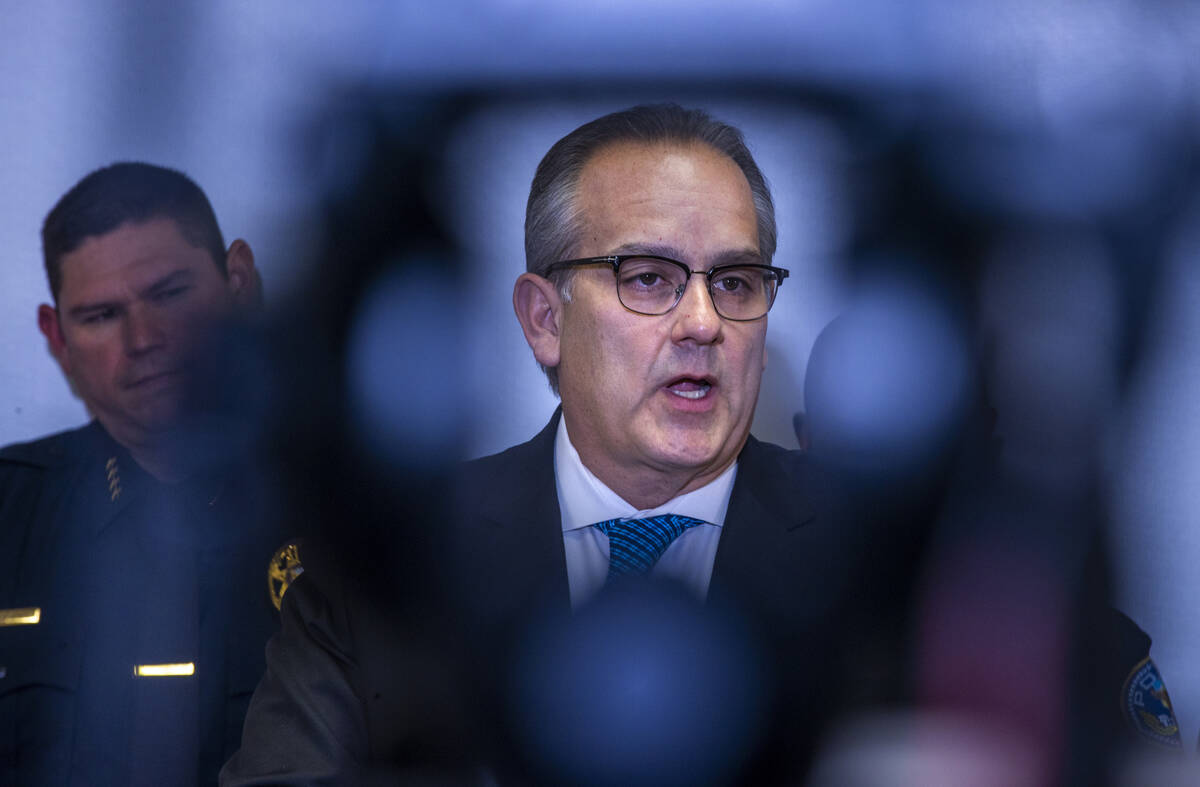 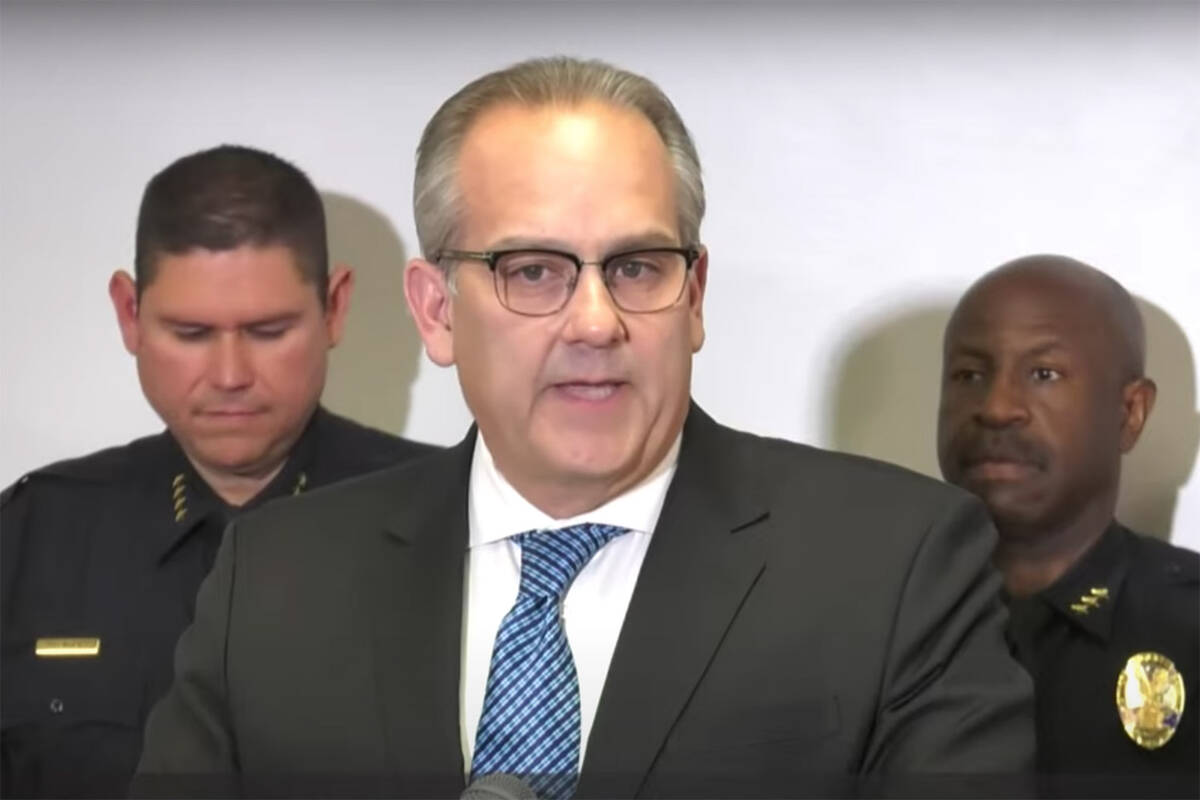 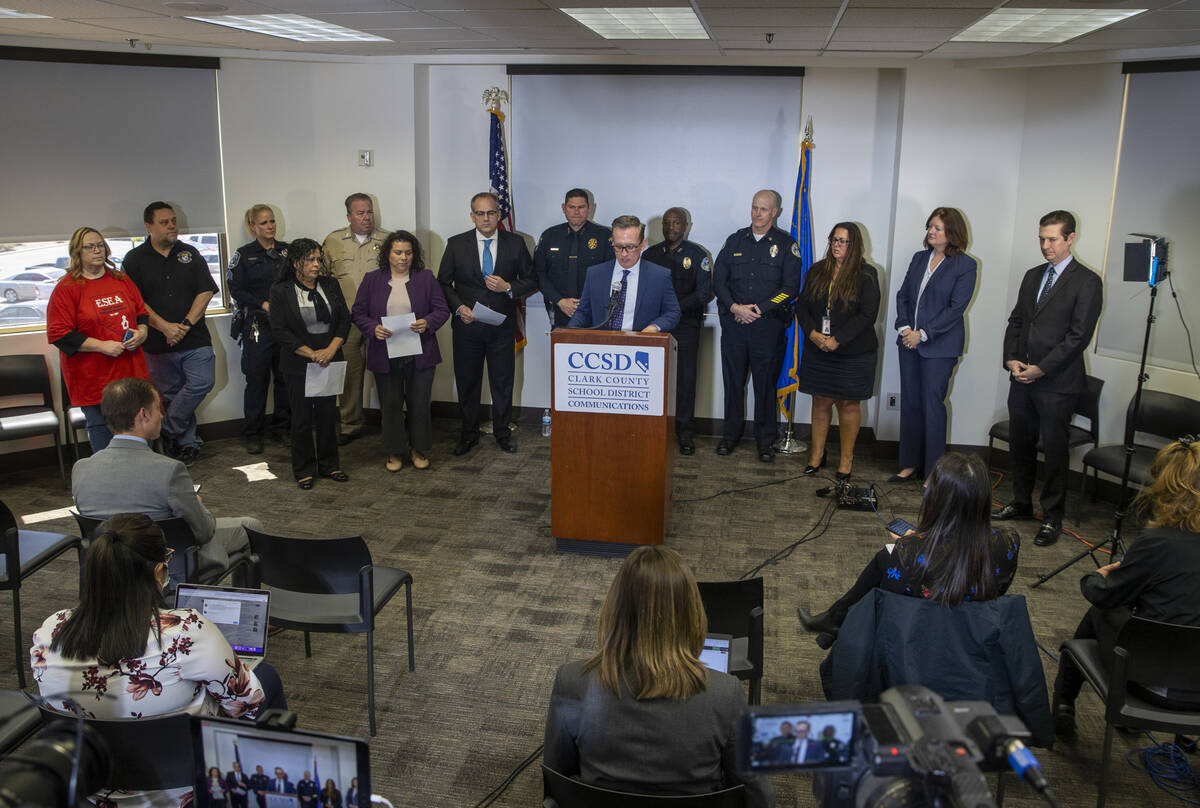 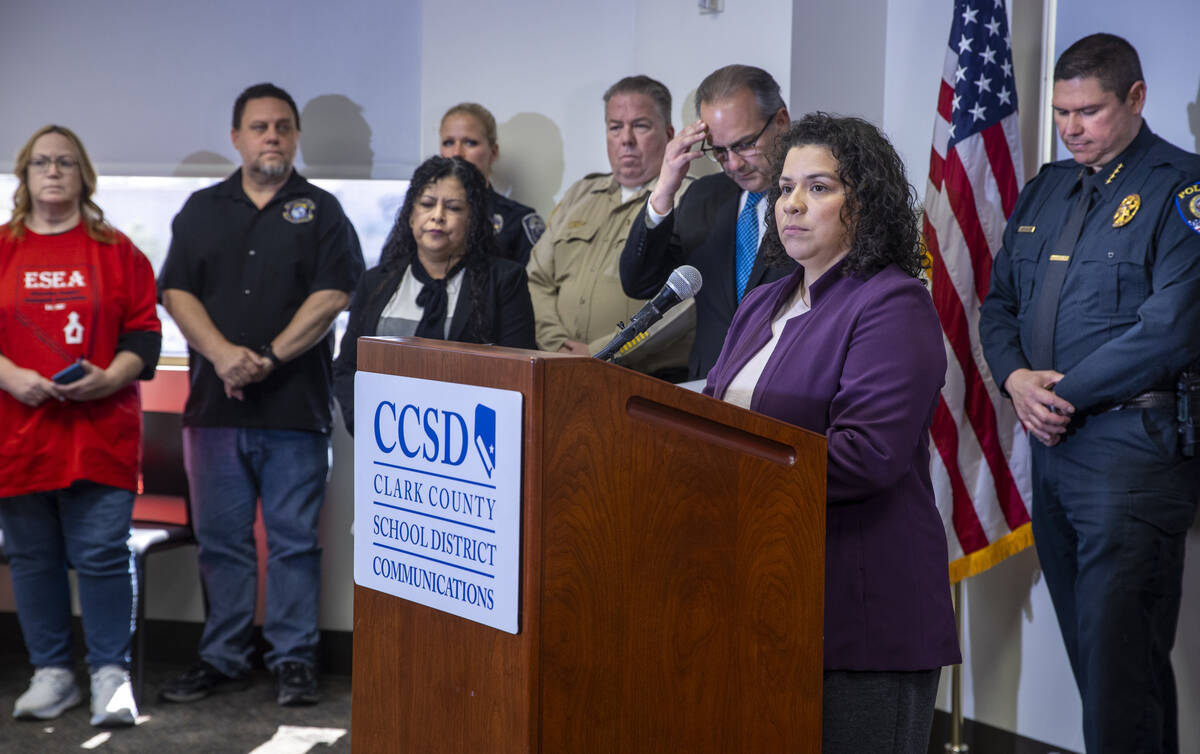 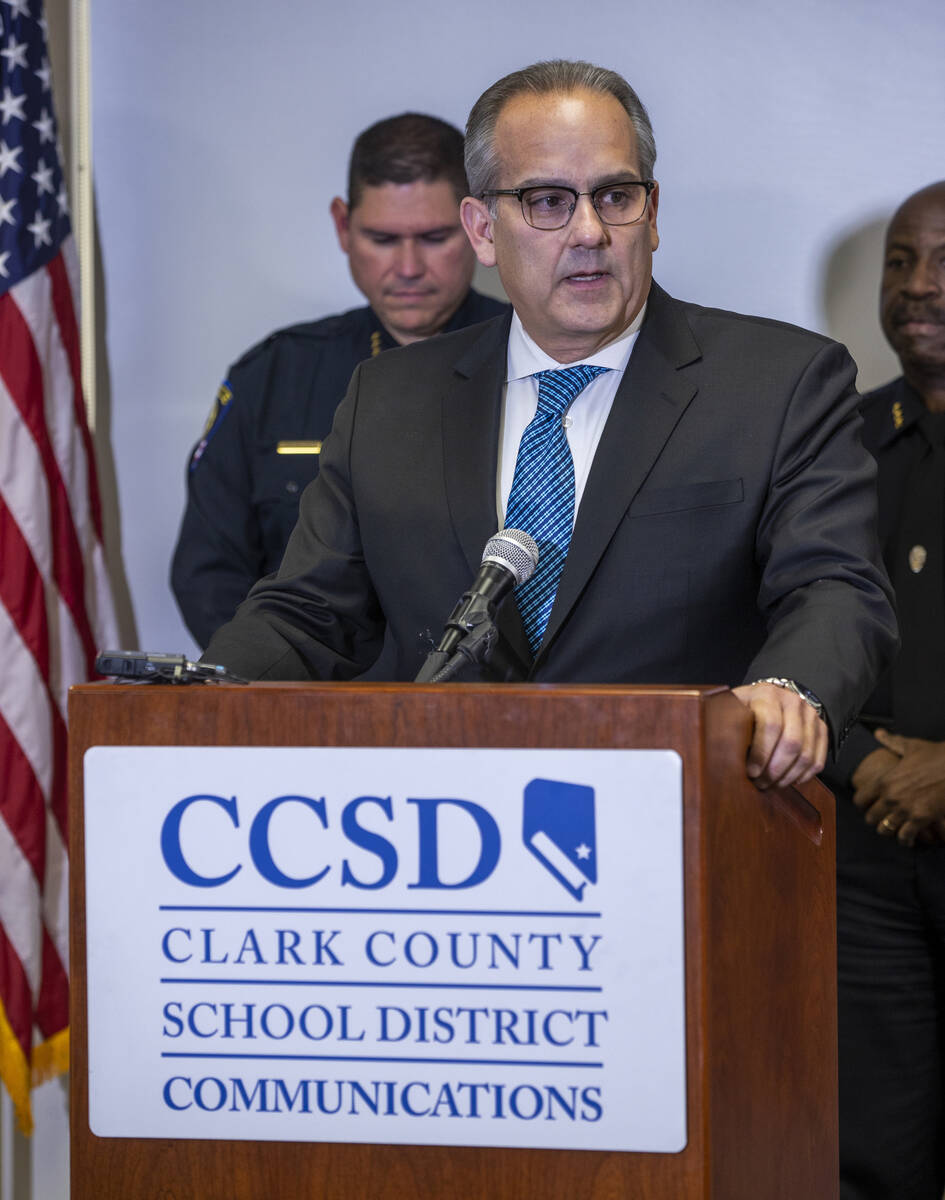 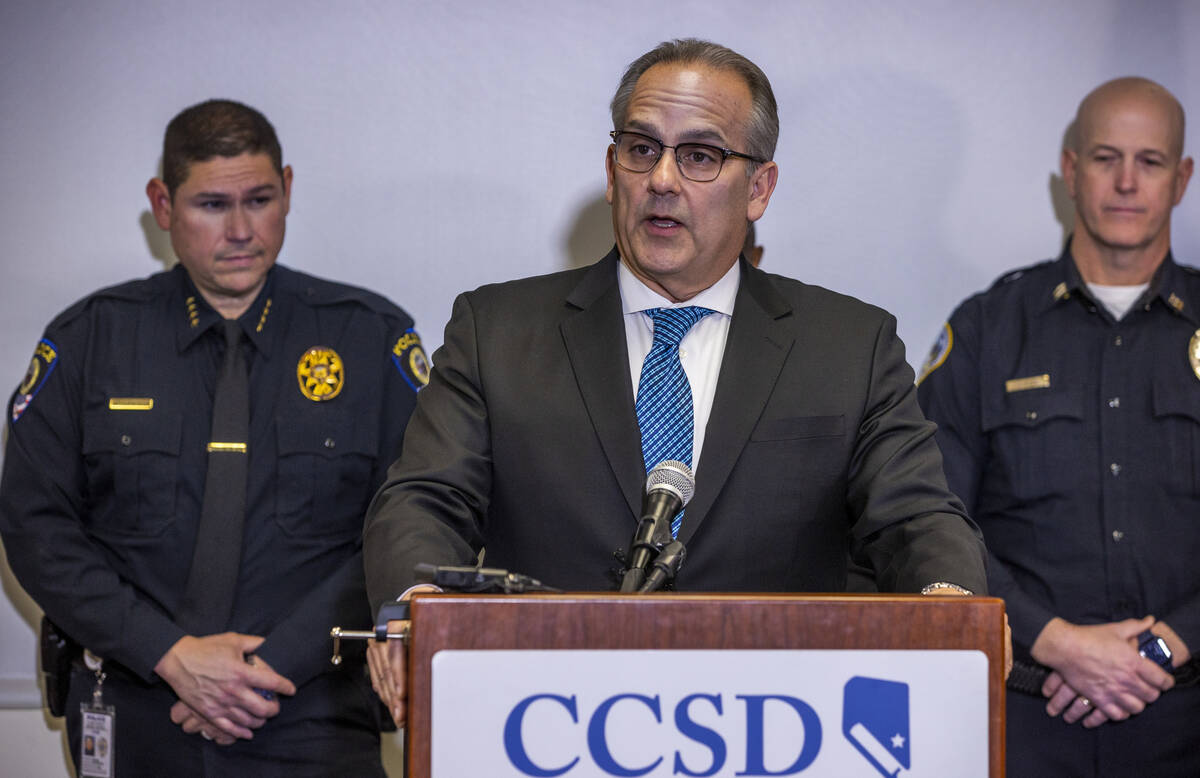 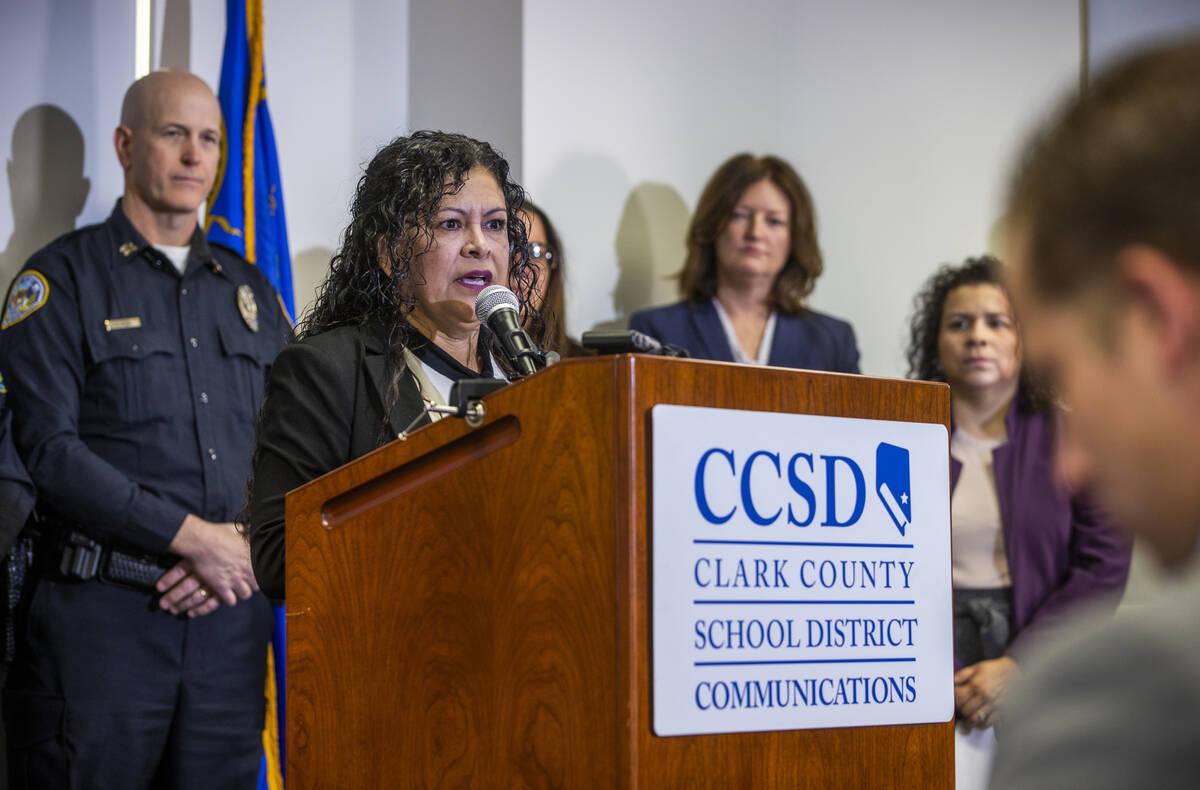 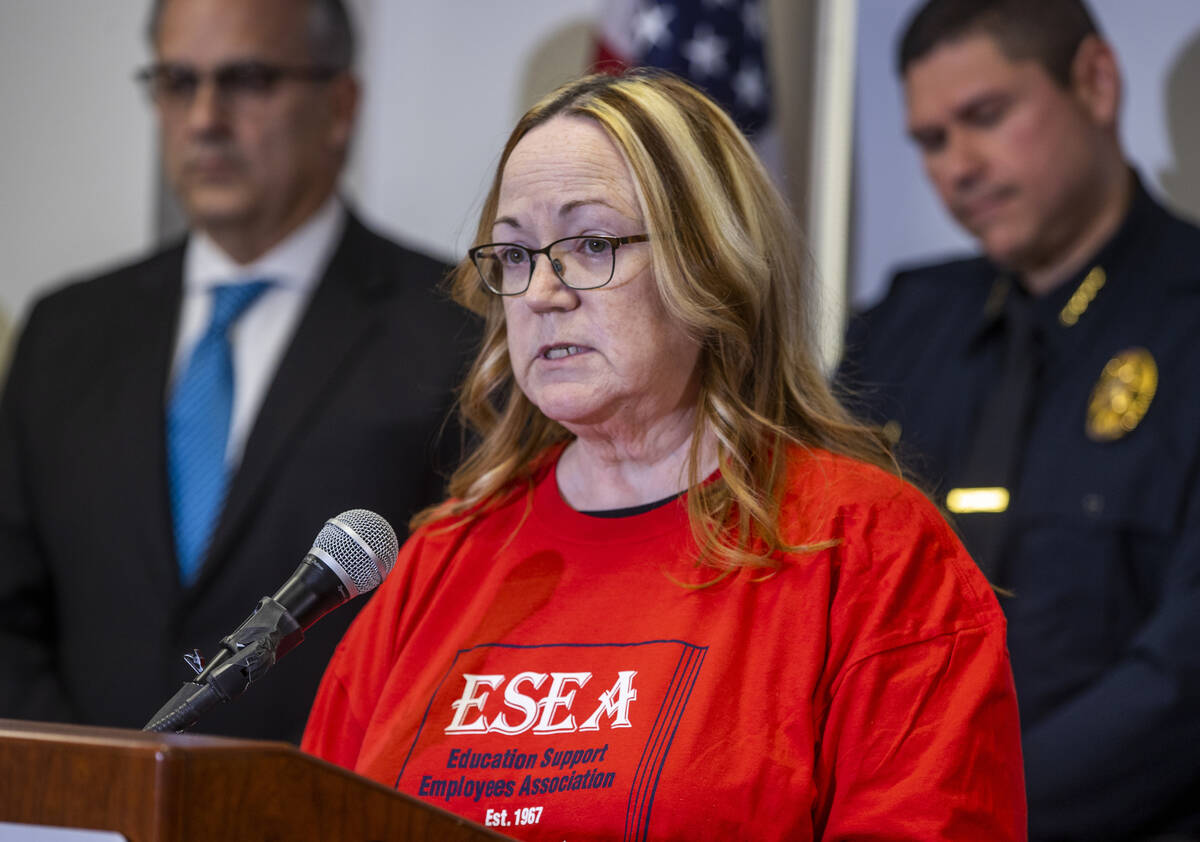 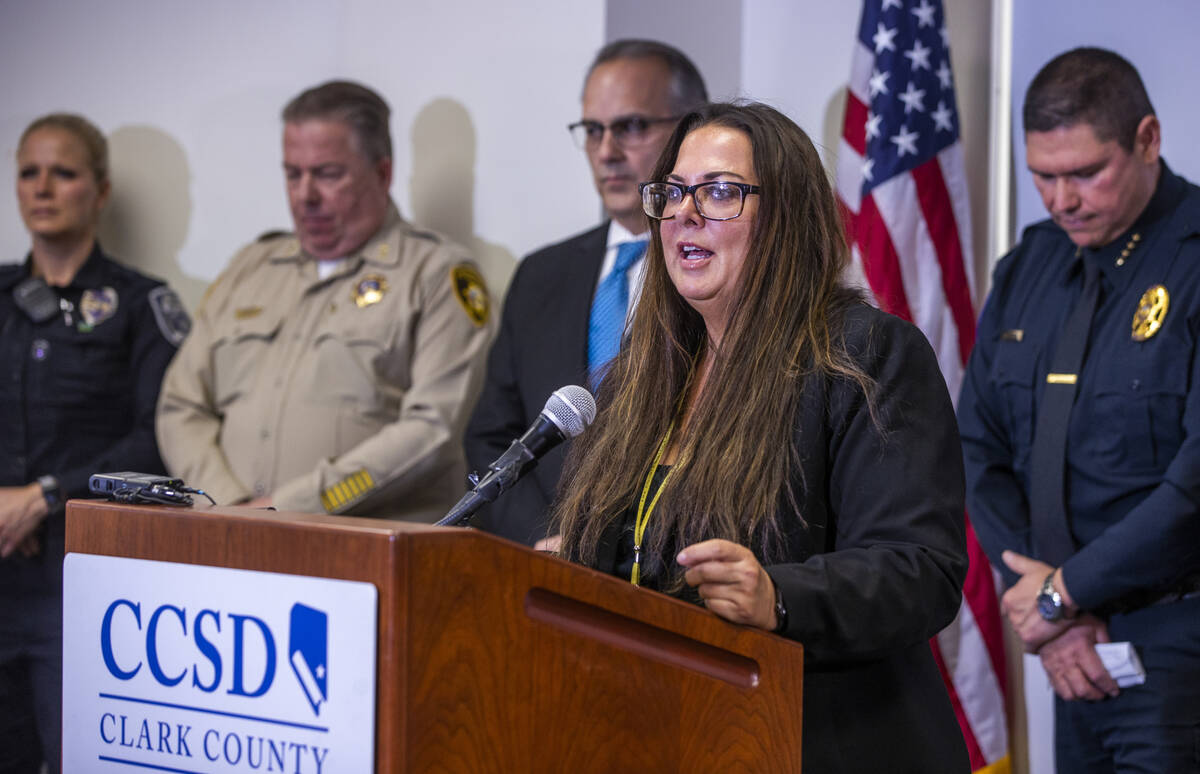 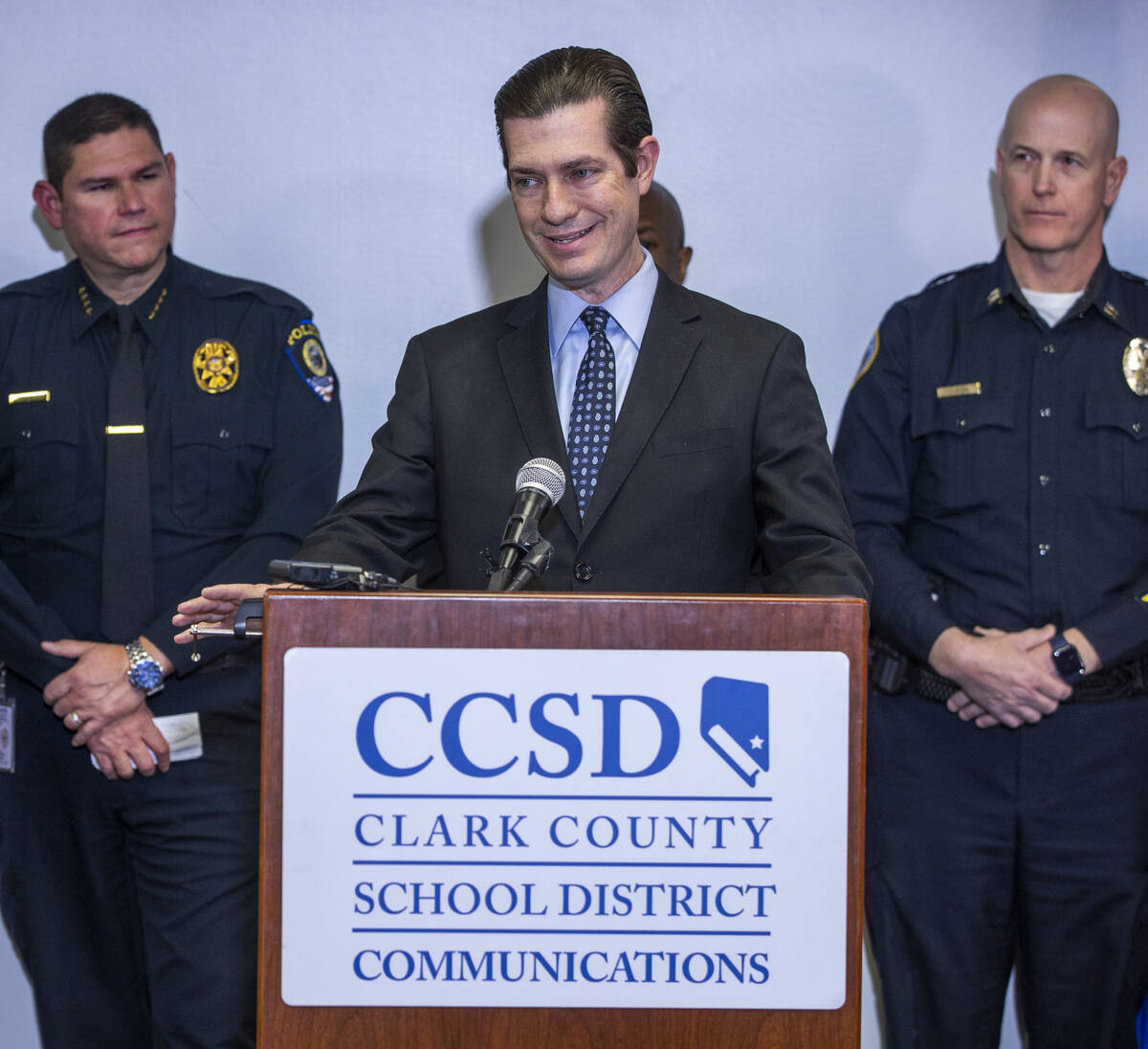 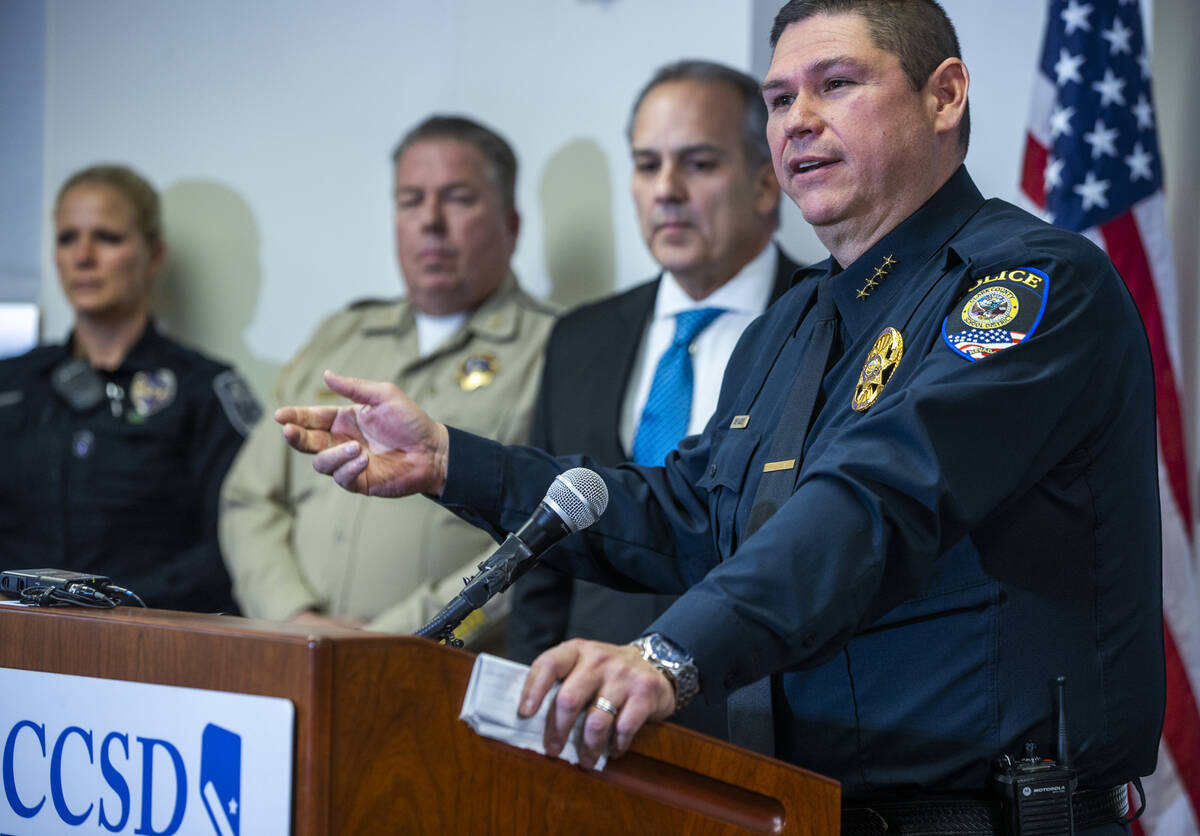 In response to an attack on a teacher at Eldorado High School last week, the Clark County School District announced new protocols and safety measures that include increased police presence in and around district schools and new communication systems for teachers to reach leadership and security from their classrooms.

In a joint press conference with the district, Marie Neisess, president of the largest teachers union in Nevada, called the attack on an Eldorado teacher tragic and horrific.

A 16-year-old student was arrested on 15 felony charges including sexual assault, kidnapping and attempted murder for the attack, and the incident prompted the Clark County Education Association and Nevada Gov. Steve Sisolak to demand a safer environment for teachers in the district.

The assault marks the latest in a series of violent incidents that have gripped the district in recent weeks. Last month, in response to the violence, the district unveiled new disciplinary actions, including potential expulsion for students who engage in fighting.

Neisess spoke at Tuesday’s press conference on behalf of the teacher who was attacked at Eldorado, saying she had asked her to set the record straight.

“This was a brutal assault. The student came in with the intent to attack this educator and did so from the word go,” Neisess said. “There is only one victim here, and that is the educator.”

Neisess said the educator also expressed concerns about the safety of her colleagues and her concerns about whether or not the new safety measures would be implemented in a timely fashion.

On Monday, district principals will address their respective student bodies and remind them of the student code of conduct that they will be held accountable for, Superintendent Jesus Jara said.

The superintendent also reiterated that students engaging in fighting and physical violence will be removed from campus, and any student engaged in major disciplinary infractions will face expulsion proceedings and will be removed from the district’s comprehensive schools.

Students who distribute controlled substances on campus or who commit battery to staff or students resulting in a criminal citation will face expulsionary suspensions, Jara said.

Students recommended for expulsion will still be referred to other options like academic centers, or behavior schools, and the Nevada Learning Academy, the district’s online public secondary school.

“We will not tolerate violence. We will take swift action to remove students who are not focused on learning,” Jara said

The district will also update its camera systems and update its classroom communications with instantaneous alerts, similar to a panic button, where adults, teachers and staff will be able to contact administrative staff and first responders from their location.

CCSD Police Chief Henry Blackeye called the attack on the Eldorado teacher the first of its kind in the district.

The Clark County School District — the fifth largest in the country — has seen 5,700 calls for service regarding fights, batteries or assaults and 1,300 combined incidents where arrests and citations had been issued on school campuses since the start of the school year.

Blackeye said CCSD Police had asked its law enforcement partners, in the Las Vegas Metropolitan, Henderson and North Las Vegas police departments to show increased presence in and around schools through the end of the school year.

“This school year is shaping up to be the busiest in our department’s history,” Blackeye said.

Neisess, the teachers’ union president, said that she supported the new safety measures.

“We know that the burden is now on Superintendent Jara and CCSD to carry out those changes as swiftly and efficiently as possible,” Neisess said. “This cannot wait one more day. We must act now.”

The district announcement comes as teachers planned to stage a protest outside the district administrative offices Wednesday.

Vicki Kreidel, a second-grade teacher and president of the National Education Association of Southern Nevada, is just one of the educators who mobilized as part of a grassroots effort to stage Wednesday’s protest.

The protest is planned for 8:30 a.m. Wednesday, April 13 at the district’s Administrative Center, 5100 W. Sahara Ave. As of Tuesday, more than 400 people had indicated they were attending or interested in attending according to a Facebook event for the protest, and Kreidel invited the public to attend and show their support for educators.

“We’re hoping that this protest tomorrow…will help all the educators see that we can mobilize, we can work together and we can advocate for something that’s important together,” Kreidel said. “Student and staff safety matters. We hope that the district sees that educators have the community’s support so that they’ll take action.”