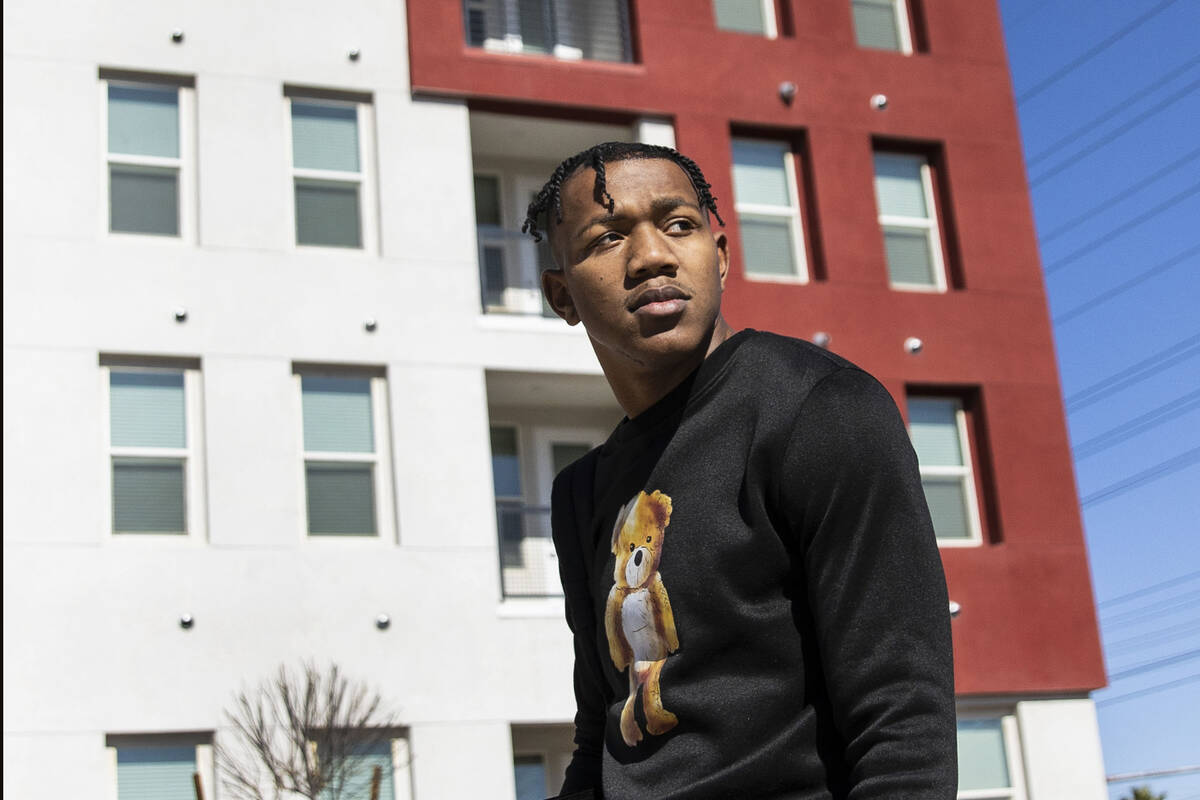 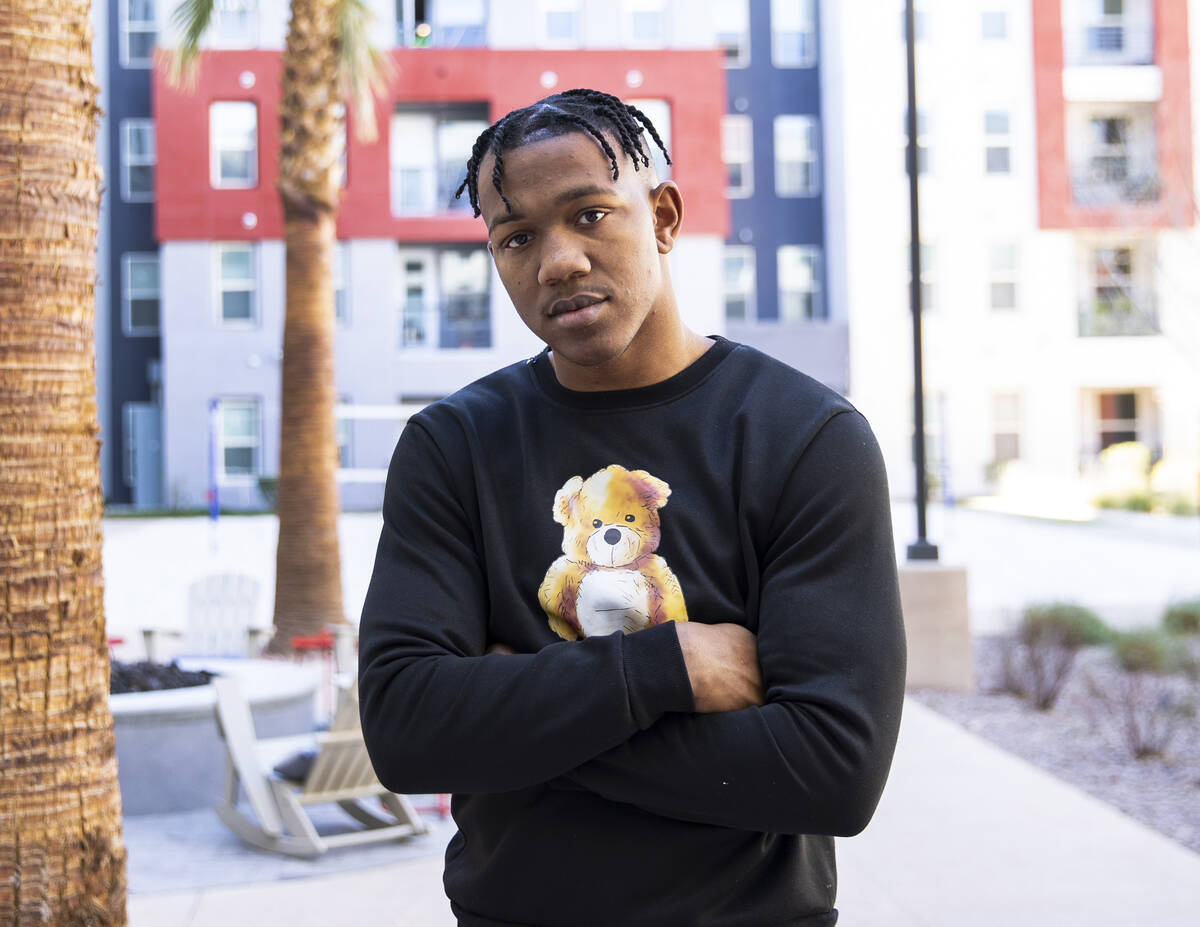 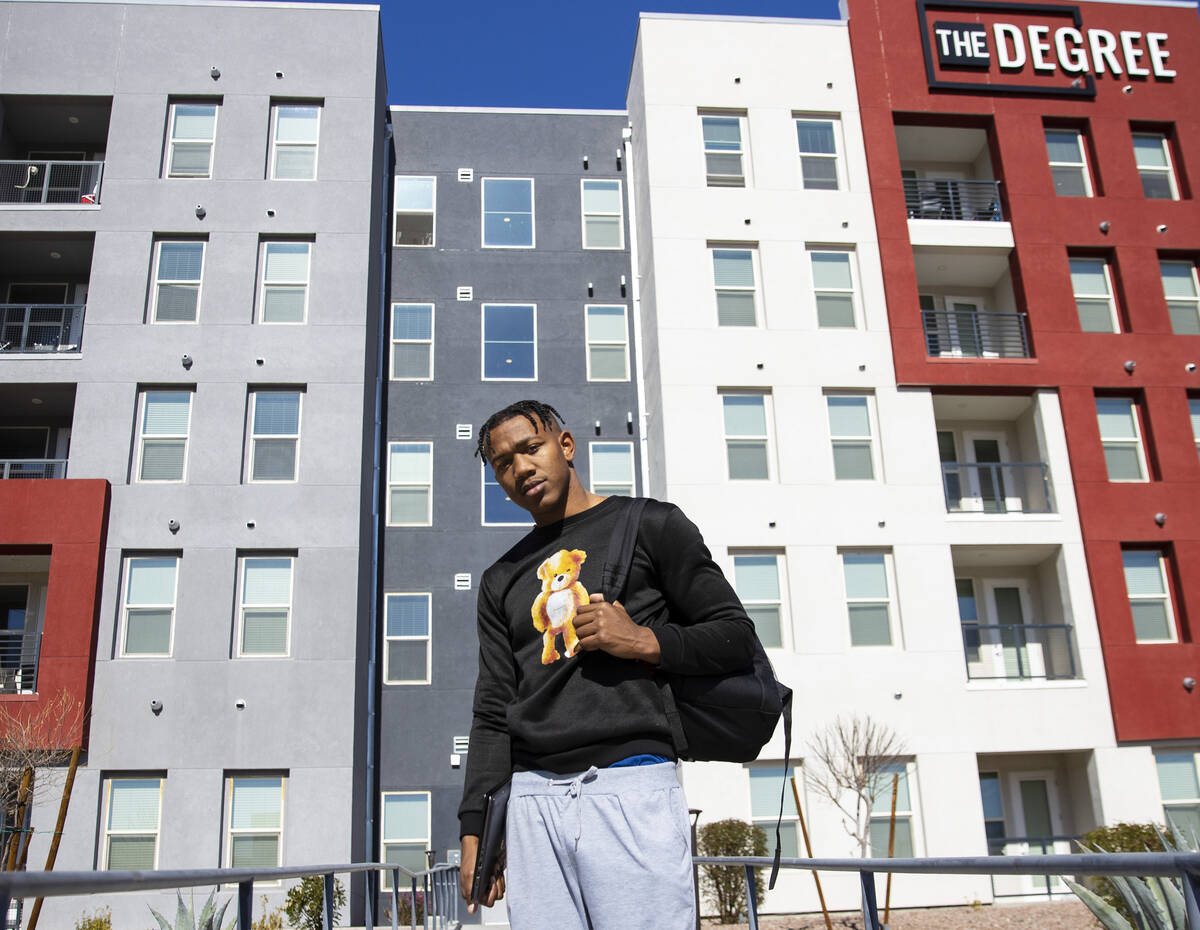 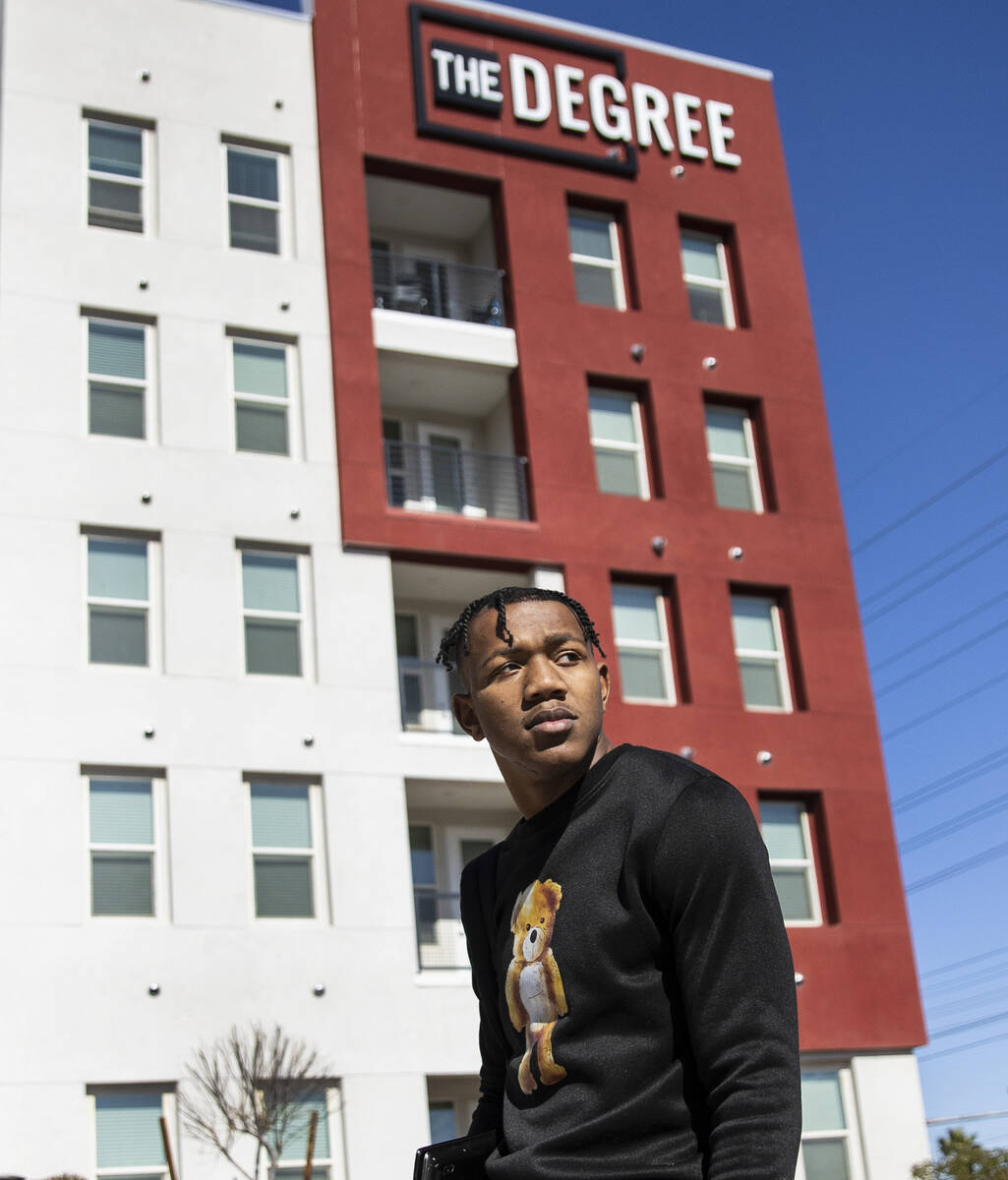 A few years ago, Isiah Robinson spent a night walking around with nowhere to go after getting kicked out of his mother’s house following a big fight.

By 5 a.m., he decided to head to Cheyenne High School in North Las Vegas and wait until classes started. He was wearing the same clothes as the previous day.

Robinson said he was almost sent into foster care, but lived with his uncle instead. Later, that arrangement wasn’t possible for a period of time, but thanks to help from staff at his high school and the nonprofit Nevada Partnership for Homeless Youth, Robinson found assistance with housing and other needs. He graduated from high school in 2019.

Now, the 21-year-old is pursuing a bachelor’s degree in hospitality management at UNLV and is a participant in the UNLV HOPE Scholars Program — a partnership among the Clark County School District, the university and Nevada Partnership for Homeless Youth that provides support for students at the university who are homeless or experiencing housing insecurity.

Robinson was one of nearly 14,000 CCSD students identified as homeless in the 2018-19 school year, the last full school year before the pandemic.

The number of students identified as homeless dropped sharply when the district operated under 100 percent distance learning starting in March 2020, but it has since been trending higher.

It’s a trend that was felt nationwide.

A November 2020 report from the national nonprofit SchoolHouse Connection and Poverty Solutions at the University of Michigan estimated a 28 percent decline, with about 420,000 fewer schoolchildren identified in fall 2020 compared with fall 2019.

Researchers conducted a survey of school homeless student liaisons and received more than 1,400 responses. They asked liaisons for the insights into why numbers dropped.

“The vast majority said it was because of virtual learning — that the eyes and the ears of the school system were just not there,” said Barbara Duffield, executive director of SchoolHouse Connection.

Also, there were families who were mobile during the pandemic and left a school without informing school officials, Duffield said. And in some cases, there wasn’t a way for schools to stay in touch on a regular basis with families, she added.

Now, schools nationwide are reporting homeless student numbers are back up since in-person classes have resumed, Duffield said.

So far this school year, the Clark County School District is on track to have homeless student numbers similar to pre-pandemic levels, Shebeck said. Currently, the district has 12,891 students identified as homeless.

How many are homeless?

Last school year, 10,825 students in the school district were identified to receive homeless services, according to data provided by the district. That number was down substantially from previous school years.

During the 2019-20 school year, which included the first couple of months after the pandemic ramped up and the district switched to distance learning, 13,287 students received homeless services.

Pre-pandemic, numbers were even higher: 15,019 students were identified during the 2017-18 school year and 13,844 during the 2018-19 school year. The drop between those two school years happened because, as of December 2017, students classified as “awaiting foster care” no longer qualified as homeless.

A lot of the district’s identification of homeless students relies on face-to-face interactions with parents and students, Shebeck said, which was a challenge while distance learning was underway.

State and federal temporary eviction moratoriums, which have since expired, also may have played a role.

“I do think that the moratorium helped in some ways so that people were able to stay where they were at,” said Meg Pike, a McKinney-Vento liaison for the school district.

Another possible factor behind the drop in numbers last school year: The district saw its overall enrollment decline by about 10,000 students, for a total of about 307,210 students. It was the third consecutive year with a drop.

‘Most stable part of their day’

Even prior to the pandemic, experts nationwide agreed that school numbers of youth who are homeless have traditionally been “significantly undercounted,” said Arash Ghafoori, executive director of the Nevada Partnership for Homeless Youth, a Las Vegas nonprofit.

It’s a challenge to count such a mobile population and students may not disclose their status or be aware they meet the definition of homeless, he said.

But, Ghafoori added, “school has been a really critical and important lifeline for young people experiencing homelessness.”

Beyond academics, youth rely on schools for needs such as food, Internet access, day shelter, positive interactions with adults and sometimes health care, he said.

For a homeless youth, “sometimes, the most stable part of their day can be at school,” Ghafoori said.

“For families, it’s a place for childcare,” he said, noting older siblings are often tasked with taking care of younger siblings when there are challenges with housing or family instability.

But during distance learning, those traditional supports looked different, Ghafoori said. “When schools first shut down, that’s obviously a huge, huge impact for our population.”

It meant fewer ways to connect with community resources, less ability for schools to count young people and challenges with being able to pick up on the signs of homelessness, he said.

Some students got disconnected from school temporarily or permanently during the pandemic, Ghafoori said. “For young people who stopped going to school, were they counted or not? We don’t know.”

The nonprofit goes to the streets to reach youth and has mobile crisis intervention teams that provide 24/7 assistance. There’s a crisis phone line and certain locations where youth can go to get help.

It also offers emergency shelter and housing services, and a drop-in center to meet basic and immediate needs.

Youth can get connected with other services through the nonprofit, Ghafoori said, and there’s an attempt at family reunification but “most of the time, that’s not possible.”

The organization has always been a strong partner with the school district, Ghafoori said. That includes providing training by request to school employees on topics such as how to identify homeless youth, approach them and provide a connection with community resources.

Also, the organization does school outreach to let students know about its Safe Place mobile crisis intervention program in case they need it in the future.

The school district has a homeless student advocate at each school who helps identify homeless families, Pike said. It’s typically a counselor or social worker who takes on that role.

For children who are identified as homeless, the school district provides services with the aim of removing barriers to help them succeed in school, Pike said.

That could include providing backpacks, school supplies and hygiene items through partnerships with local organizations.

If high school students have fees for certain classes or sports, the district pays those “as we can,” Pike said.

Students also have a right to their school of origin, Shebeck said, to promote educational stability since that’s where their friends and teachers are. That means they’re able to stay at their existing school regardless of whether they move outside of their attendance zone.

The school district assists with transportation and most of the time, that’s by providing a public bus pass, she said.

Homeless students can also receive free breakfasts and lunches at school, though currently all school district students regardless of income qualify through a federal offering.

Robinson is originally from the Los Angeles area, where he lived with his father and other family members until leaving home during his junior year of high school.

Looking back on his teenage years, Robinson said he feels he was forced to grow up too quickly.

Robinson said he was among seven students who started in the UNLV HOPE Scholars Program at the same time and participants came from different struggles. “To me, that was the beauty of it.”

“Without it, I don’t know where I would be.”