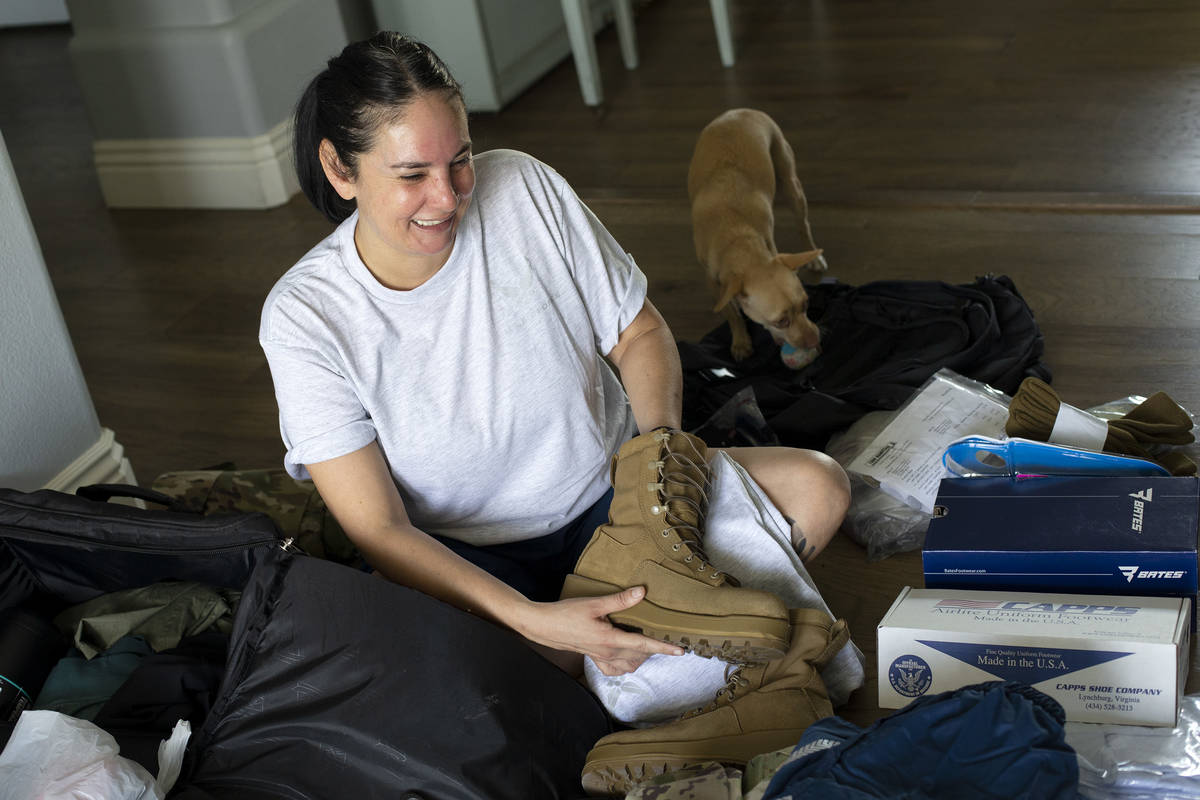 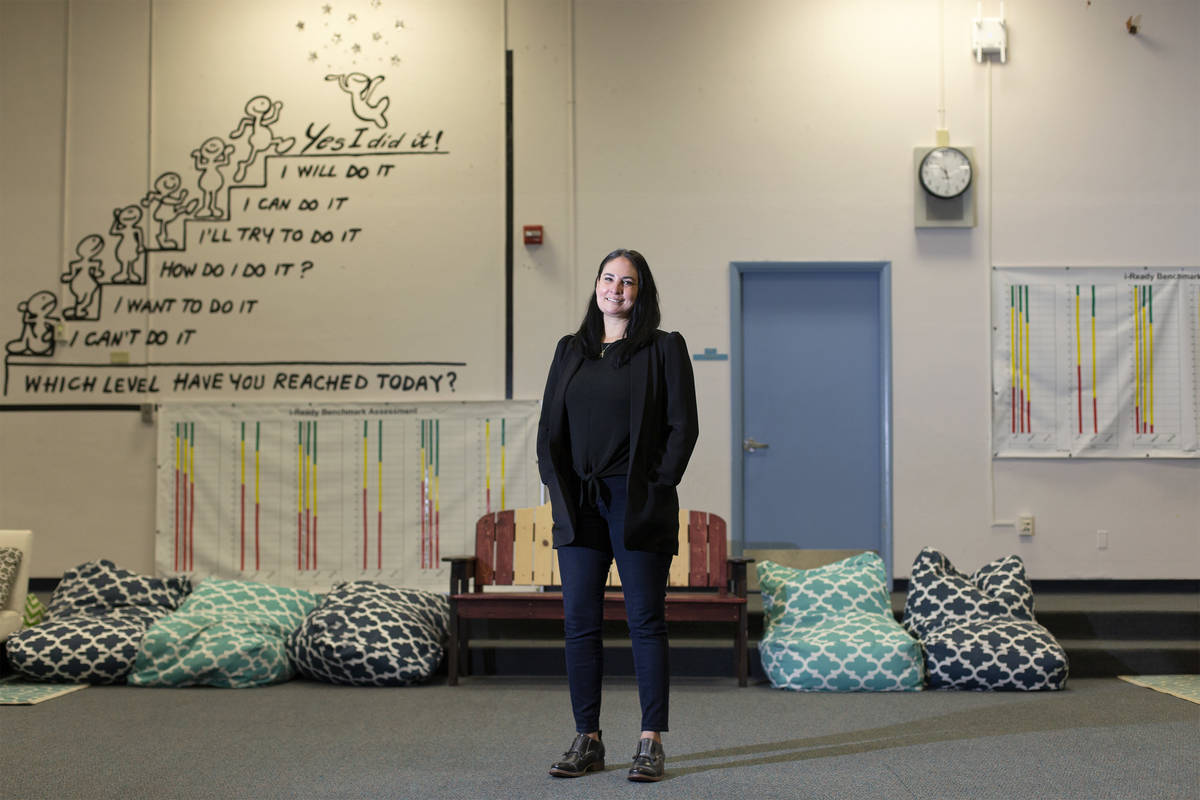 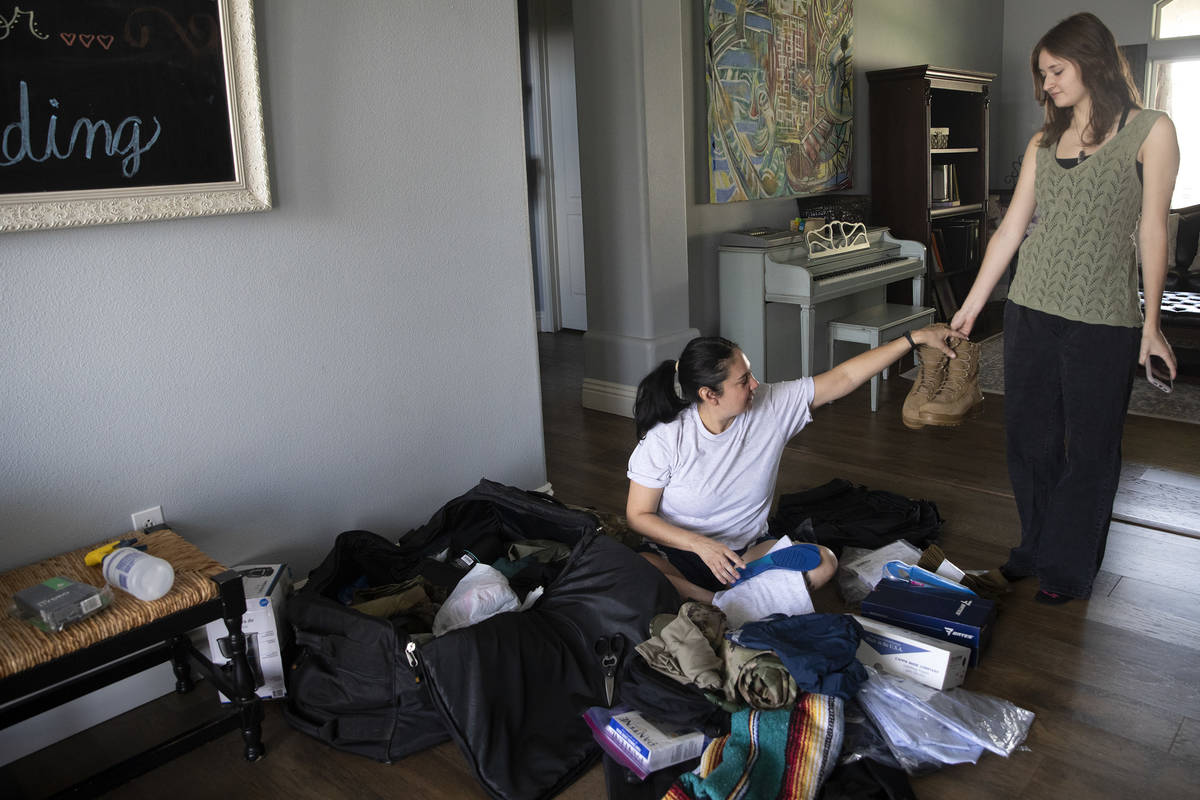 Michelee Quiroz Cruz-Crawford accepts boots from her daughter, Lola Crawford, 16, while packing for Air Force Guard officer training at her home on Saturday, July 31, 2021, in Las Vegas. Cruz-Crawford will attend the training in Montgomery, Ala., during August and September. In addition to her new military service, she is the principal at C.C. Ronnow Elementary School, working toward a doctorate and running for city council in Las Vegas' Ward 6. (Ellen Schmidt/Las Vegas Review-Journal) @ellenschmidttt 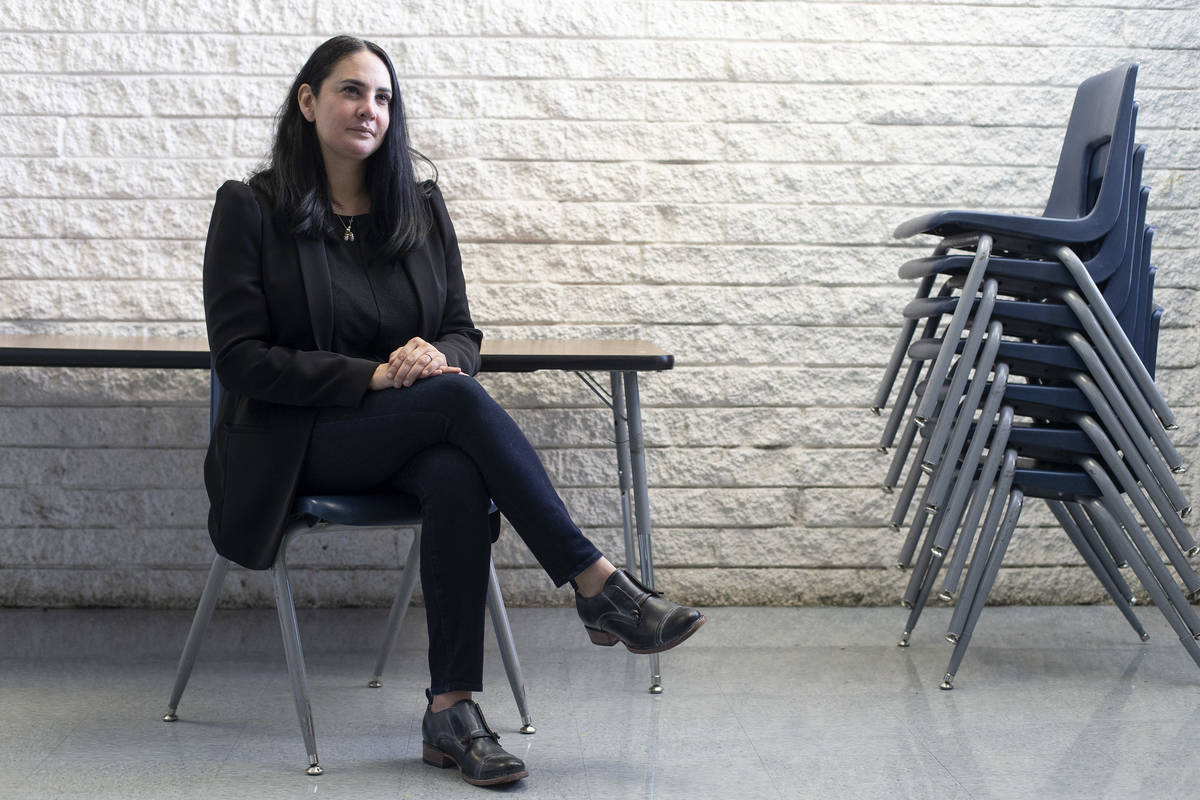 Michelee Quiroz Cruz-Crawford, principal at C.C. Ronnow Elementary School, at the school on Friday, July 30, 2021, in Las Vegas. Cruz-Crawford enlisted in the Air Force Guard last year and will attend officer training in August and September in Montgomery, Ala. She's also working on a doctoral dissertation and running for city council in Las Vegas' Ward 6. (Ellen Schmidt/Las Vegas Review-Journal) @ellenschmidttt

But when students arrive Monday for the first day of school, she won’t be there. And she won’t set foot in the building again until early October.

That’s because Cruz-Crawford, who enlisted in the Nevada Air National Guard in November 2020, will be at officer training school from Tuesday through Sept. 30 in Montgomery, Alabama.

Cruz-Crawford, 38, said joining the military is something she has always wanted to do.

“The Guard is really all about public service,” she said.

Serving in the armed forces is also a family affair. Her husband is an Army veteran who enlisted right out of high school and served for four years.

Cruz-Crawford wants to encourage students to consider military service — including the National Guard — as a pathway to help them pursue their dreams, including being able to pay for college or receive career training.

She said she has an amazing assistant principal at her Las Vegas school who has aspirations of becoming a principal and will lead in her absence.

Cruz-Crawford said it’s a “very unique” circumstance, noting the Clark County School District has been “very respectful.” Cruz-Crawford, who has lived in Las Vegas since 1988 and went through the school district as a student, began working for the district in 2004. She took some intermittent breaks to raise her children and pursue other projects.

Now, she’s in her seventh year as a school administrator — four as principal and three as an assistant principal — at Ronnow Elementary.

Danielle Kandt, a fifth-grade teacher at Ronnow, said she has seen the way Cruz-Crawford loves students and staff.

She called her principal “very inspiring” and someone who is supportive in giving teachers the opportunity to explore new things and perfect their craft.

Kandt, who has taught at the school for three years, said Cruz-Crawford is kind, silly at times yet professional, intelligent and has good intentions in everything she does.

“In general, she does things with her heart,” she said.

Paving the way for others

At officer training school, the day typically runs from about 4 a.m. to 10 p.m., Cruz-Crawford said. It begins with physical training, which includes running, pushups and sit ups.

But the majority of the day is spent in a classroom learning about protocols and processes, she said, including the ins and outs of how the Air Force is structured.

“Really, the whole focus is to build leaders,” she said.

Once she completes officer training school, Cruz-Crawford will teach classes on topics such as leadership and mentorship, and lead diversity, equity and inclusion trainings. Those are things she already does in her civilian life.

Cruz-Crawford, who is finishing up her doctorate degree, said she has become a researcher in the area of roadblocks to equity in institutions. One major initiative she has worked on as a school leader is creating a more diverse teaching workforce.

When she arrived at Ronnow seven years ago, she noticed the support staff was largely Black or Hispanic and licensed employees such as teachers were largely Caucasian.

Cruz-Crawford asked support staff members why they weren’t licensed teachers. A lot of it came down to barriers such as a lack of time, money or confidence to make it happen, she said.

Support staff tend to live in areas where they work, Cruz-Crawford said, noting the goal is to look at people who are already within the community and are likely to stay for the long term.

Cruz-Crawford created a school district-wide survey of support staff and of the respondents, more than 1,500 were interested in becoming licensed teachers. One of the barriers was not being able to take time off for their job for student teaching.

She was instrumental in bringing forward Senate Bill 352, which passed during the most recent legislative session. It comes as Nevada and the country as a whole faces a teacher shortage.

It allows a paraprofessional — someone who provides instructional help in classrooms — to work toward becoming a licensed teacher by completed accelerated student teaching while remaining employed in their job.

Cruz-Crawford also created a mentorship program where school administrators teach classes in areas such as how to apply for financial aid to help support staff who are pursuing teaching certification.

And a UNLV paraprofessional pathways project has provided 37 full-tuition scholarships for support staff thus far who are pursuing a teaching license, she said.

She said Cruz-Crawford is a “wonderful, amazing person” who helps people at the bottom who want to come up. “She’s giving them that little push.”

Cruz-Crawford goes above and beyond for everyone who works at the school, Abdullahi said.

Preparing to leave for 8 weeks

As Cruz-Crawford prepared this summer to leave for eight weeks for officer training school, it wasn’t a simple process.

At school, she took plans that were previously only in her head and wrote them down or walked through them with her assistant principal.

“There’s a lot of stuff that only principals have access to, like budgets and approval processes,” she said.

Leaving requires giving control over to someone else and requires a lot of work, she said, but noted it’s better for building leaders. “I can’t wait to see what I walk back into.”

This summer, Cruz-Crawford was able to complete work such as the school’s handbook, grading policies, behavior management plans and plan for English language learners.

And there are many logistical details, too, for when a new school year begins due to the pandemic. That includes where grade levels will sit at tables in the cafeteria, and how to have children enter and exit the school building.

At home, she also had a lot to prepare too. She typed out the school schedules for her children — a 16-year-old daughter and 14-year-old son — to give her husband.

Cruz-Crawford has provided advice to her daughter, who’s staring a new school — CSN High School — and will be taking college-level dual credit classes.

She set up a meal service for her family twice a week. And over the weekend, she took her children school shopping to finish up their lists.

Cruz-Crawford normally handles the household banking, too, so she had to figure out how that would be managed.

She remembered things in the middle of the night, like at 3 a.m., and jotted them down on a list beside her bed.

But ultimately, she said Friday, “I can’t pre-plan everything.”