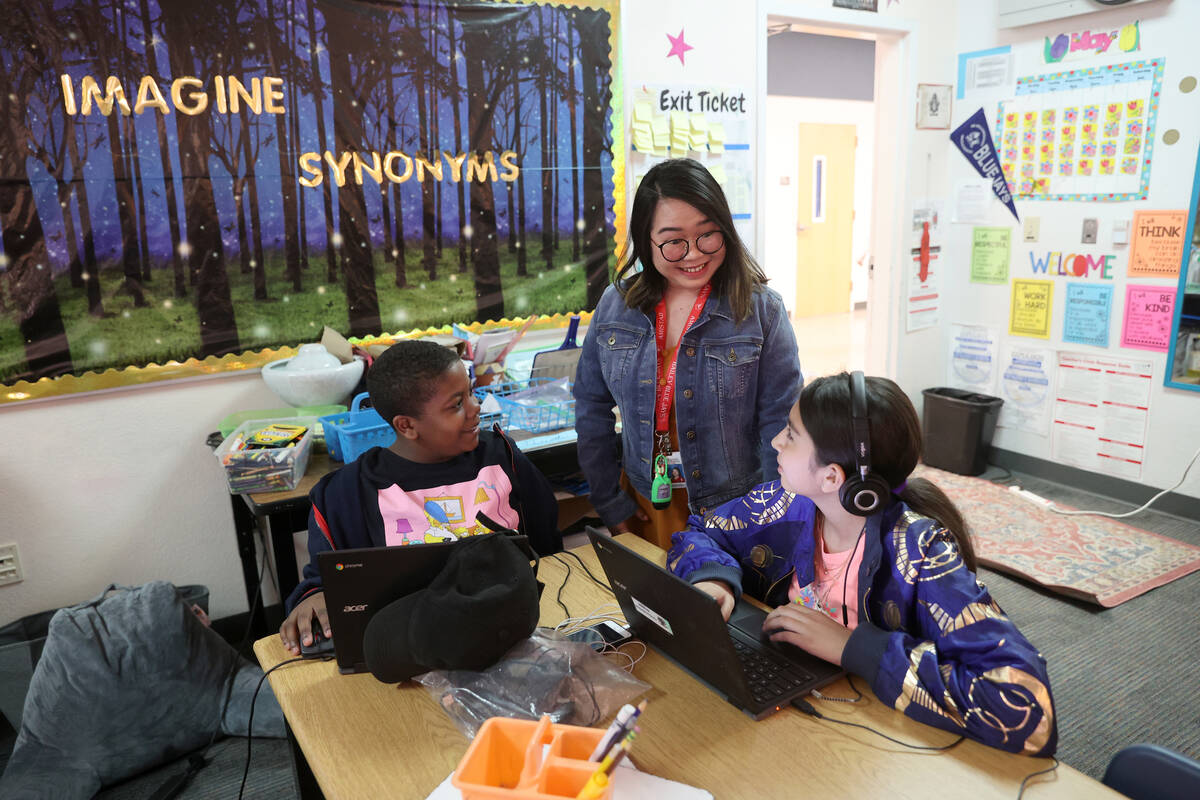 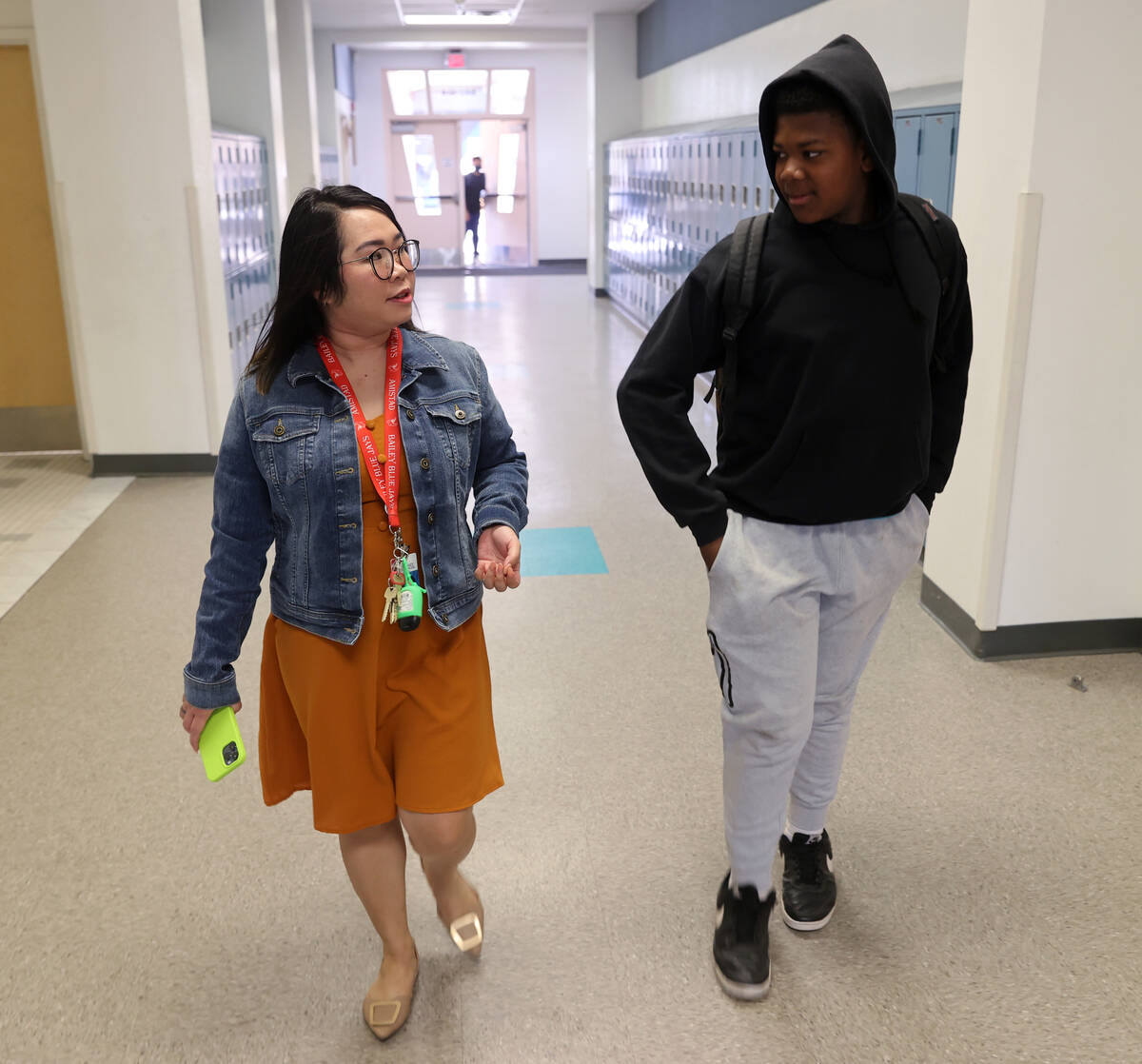 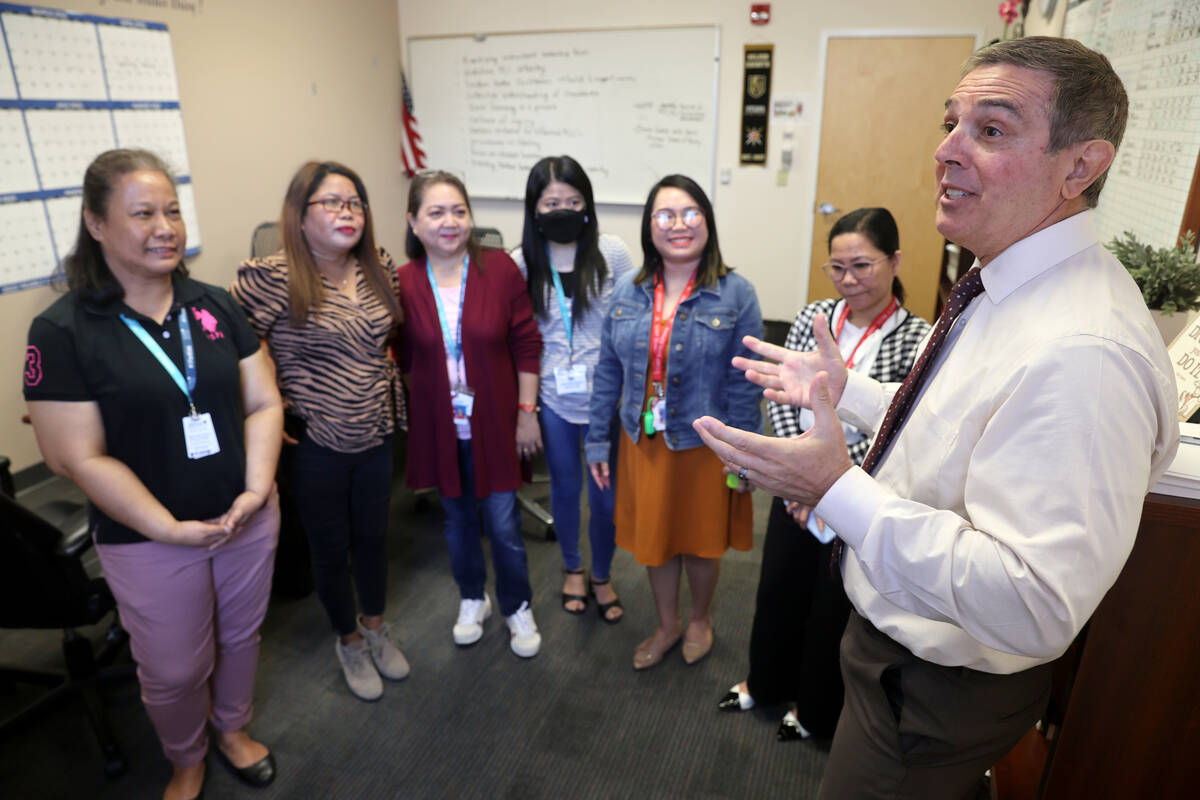 Principal Darryl Wyatt talks about the his need for more math, science and special education teachers during an interview at Bailey Middle School in Las Vegas on Wednesday, May 11, 2022. Looking on are six of his math, science and special education teachers on J-1 visas from the Philippines. Wyatt is calling on the Clark County School District to allow the hiring of more J-1 visa teachers from the Philippines. (K.M. Cannon/Las Vegas Review-Journal) @KMCannonPhoto 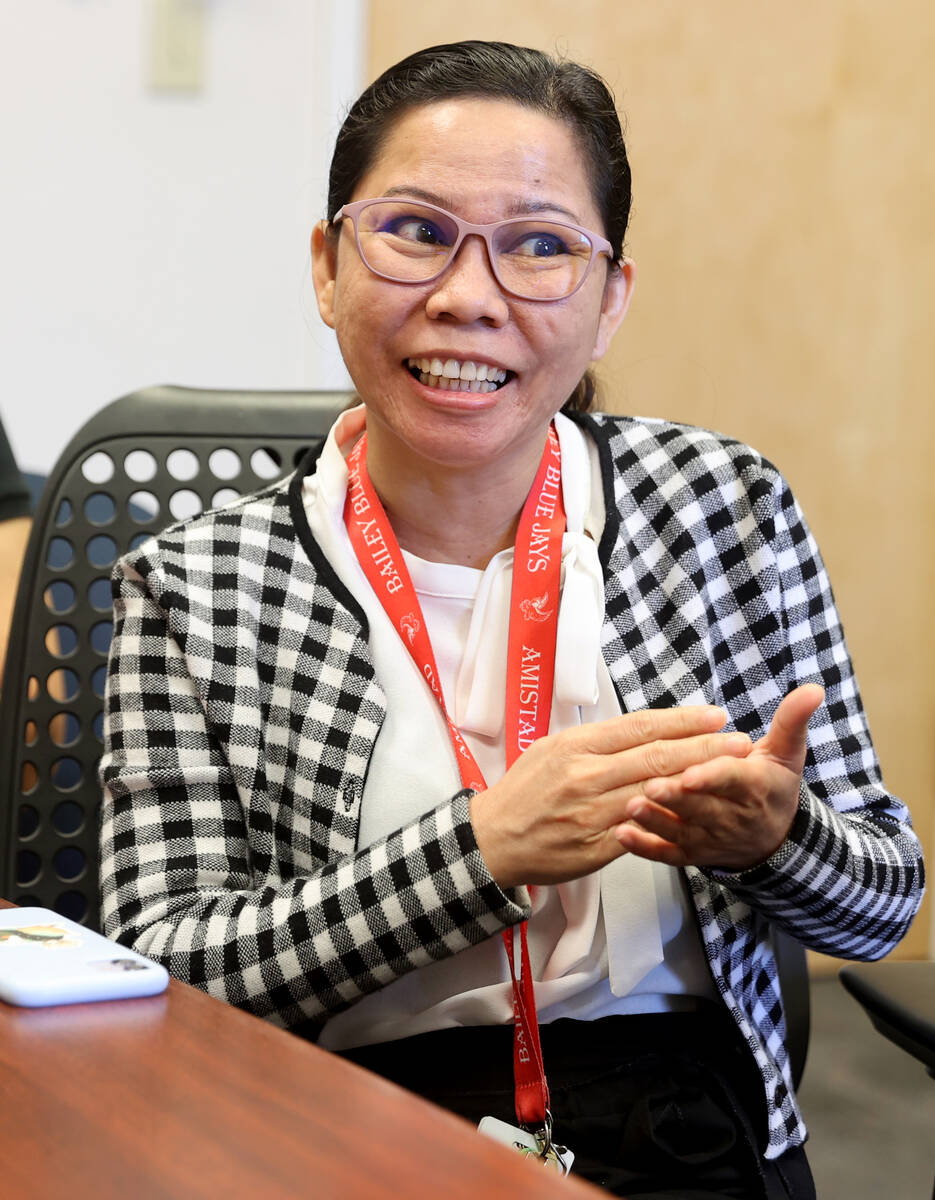 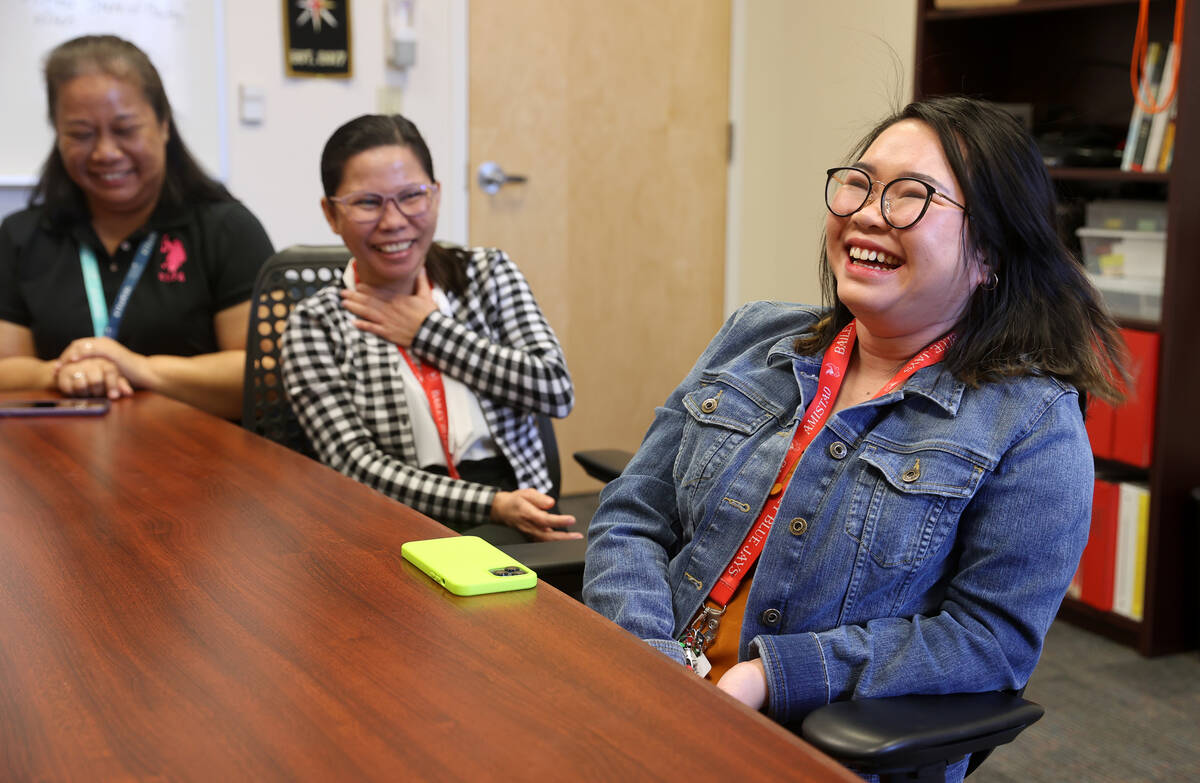 Bailey Middle School teachers, from left, Maria Czarina, Desirie Napa and Nina Karen Napoles, talk to a reporter at the Las Vegas school on Wednesday, May 11, 2022. All are J-1 visa teachers from the Philippines. (K.M. Cannon/Las Vegas Review-Journal) @KMCannonPhoto 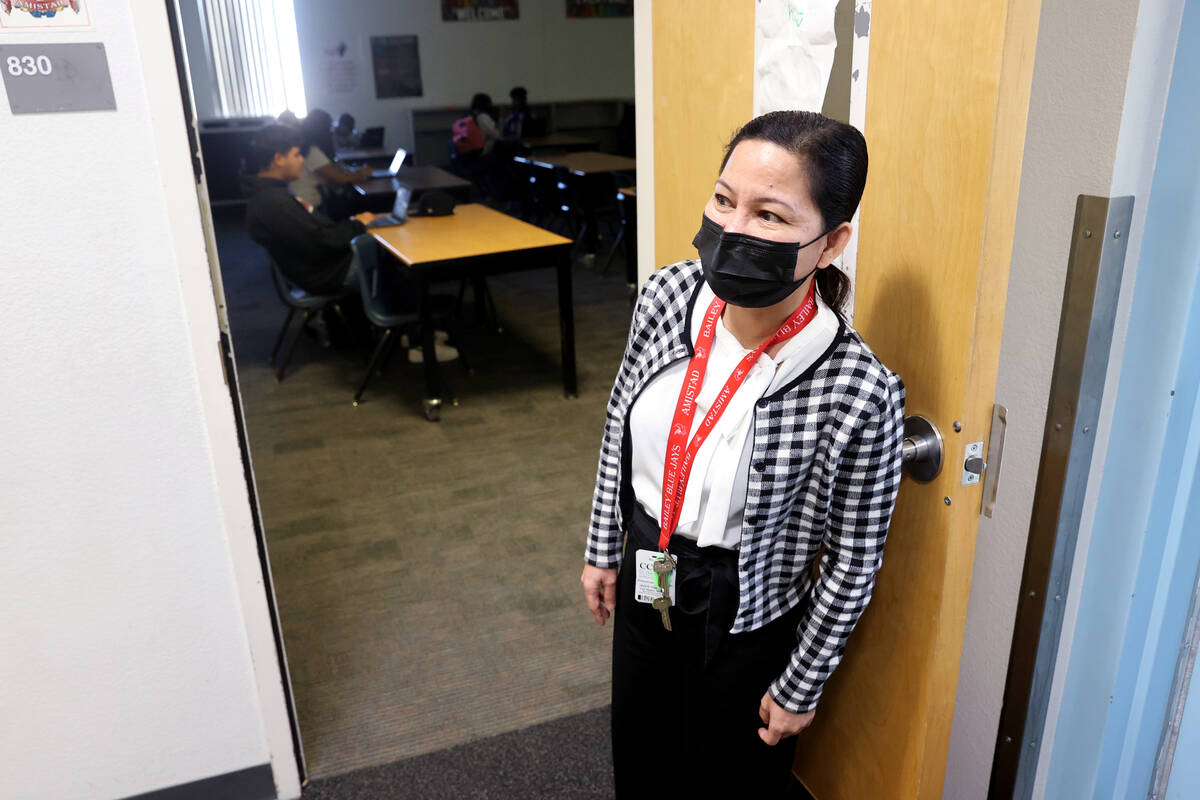 Bailey Middle School Principal Darryl Wyatt spent hours over spring break interviewing qualified health, science and English language arts teachers for open jobs at his school. By the end of the break, the principal had found a teacher for every open position.

That’s when he says he was told by the Clark County School District that the teachers were ineligible to move to Nevada because of a cap on the number of teachers the district will hire through its J-1 Cultural Exchange Program, which brings teachers from the Philippines to teach in high-need areas like math, science and special education.

“I’ve got pressure on me to fill my positions, to get bodies, and I do what I think is best in order to do that, only to run into a bureaucracy roadblock that’s not allowing me to do it,” Wyatt said.

The J-1 program, which is named for the type of visa given to teachers who participate in the work-based exchange program to the U.S., brings teachers from the Philippines to teach in the district for up to five years. The district partners with three sponsors to recruit teachers and bring them to the United States, according to its website.

Wyatt said he was contacted by one of these organizations, Greenheart Exchange, and was able to find a teacher for every open position at his school before the district told him about the limit on the number of teachers it could bring in.

CCSD, the fifth-largest school district in the country, is experiencing a teacher shortage that has forced the district to cancel classes and prompted the state to relax requirements for substitute teachers.

The district said in a statement that, as it anticipated the need to fill the J-1 teachers’ vacancies at the end of their time in the district, it determined that 175 positions per year was a manageable number for the district to fill, in addition to its other vacancies.

But Wyatt called the number an arbitrary cap that was set when the district wasn’t facing the same crisis it is today.

“Listen, if I can get a teacher to stay in my building for three years, I’m going to be feeling like I struck gold,” he said. “Does it matter whether they’re coming from the Philippines or Massachusetts or from Wisconsin? We have to hire hundreds of teachers every year, so why is this little drop in the bucket of 175 such a big issue.”

The district also said in a statement that it had a limited number of application forms available from its district-approved sponsors.

“As CCSD competes for J-1 teachers, other districts around the nation do as well,” the district said.

But Wyatt said he was told by Greenheart that it had the necessary application forms for more teachers to come to Clark County.

“Every obstacle they were throwing at me I had already jumped over,” he said. “We need to look for solutions and not just obstacles to prevent us from what we’re trying to do.”

Wyatt said the district’s policy doesn’t work for all schools.

“This is their policy, and it doesn’t matter whether you’re at Bailey Middle School in a hard-to-fill northeast middle school, or if you’re Green Valley High School in Green Valley,” he said. “It’s not the same. It shouldn’t be the same one-size-fits-all.”

Now, Wyatt said, he has not filled any of the five science teacher positions that are open at Bailey. He hasn’t even had a single applicant for any of the jobs.

“On Aug. 8, I’m really worried what’s going to happen when these little darlings show up and I don’t have a teacher for their classroom,” he said. “This is very problematic.”

Several J-1 teachers at Bailey Middle School spoke with the Las Vegas Review-Journal about their experience teaching at the school, navigating different cultural norms and teaching in more multicultural classrooms.

Special education teacher Maria Czarina De Leon said the looming separation anxiety is the foremost issue that J-1 teachers have to contend with. Teachers have to positively condition themselves on the purpose of the program, which is to equip themselves with more knowledge and skills in handling culturally diverse students, and to go back to the Philippines to share what they’ve learned teaching in American schools, she said.

Myra Babagay was a science teacher in the Philippines for 13 years before she arrived at Bailey to teach seventh grade science. This is her first year teaching at the school, but she already knows it’s going to be difficult to leave.

“I really have a passion for teaching,” she said. “I need to show (the students) that I really care for them, that I am always here for them. … I always tell my students that I’m just an email away.”

The teachers also spoke about the cultural exchange that happens in the classroom between J-1 teachers and their students. Math teacher Archine Roble said that on certain days, she’ll hand out treats or Mexican candy that she knows her students enjoy. She said students have asked her to bring the Filipino candy that she enjoys to share with them.

“Sometimes we input some of our culture to them, and they really love that,” she said. “Just by telling them more stories, it also inspires us. It warms our hearts.”

The teachers also said they have shared their positive experiences working in the U.S. with their friends and fellow teachers back home. Special education teacher Nina Karen Napoles said she has three friends in the next batch of J-1 teachers coming to the United States.

Pre-algebra teacher Desirie Nepa called teachers a “precious resource” in Nevada and the J-1 visa program an opportunity for the district to bring more trained, passionate teachers into Nevada classrooms.

“They will not regret hiring a Filipino teacher,” De Leon said.