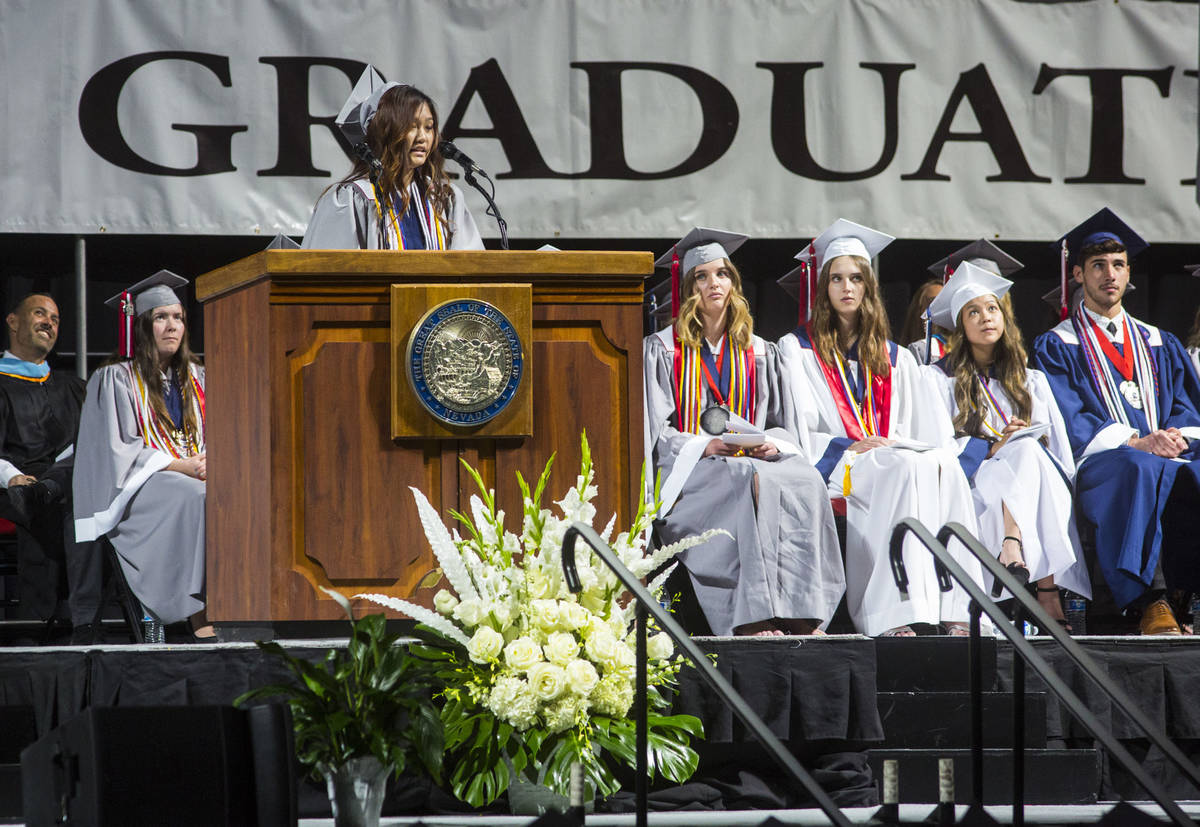 In-person graduations are a go for the Class of 2021, after the Clark County School District gave the green light for schools to hold the events in area arenas once again.

Schools will host the ceremonies throughout late May and early June at Orleans Arena, Thomas & Mack Center, MGM Grand Garden, as well as individual campus locations, the district said Thursday in a news release.

Many schools will have two ceremonies, according to an online schedule posted by the district.

Families should expect to hear details from their schools regarding cap and gown distribution, ticket allotments and social distancing guidelines in the next few weeks, according to the statement.

“You have faced and conquered many unique challenges this year, and on behalf of the Board of Trustees, I wish you the best in the future as you live your dreams and reach your goals,” School Board President Linda Cavazos said in a statement.

Sierra Vista High School will have two ceremonies at 8 a.m. and noon at the Orleans on June 4.

Principal John Anzalone said he made the announcement to seniors and their families after receiving word late Wednesday, and immediately heard excitement from students.

He said some students even reported that the credit recovery system used at the school, APEX, slowed down due to an uptick in users.

“There’s a finish line now, a light at the end of the tunnel,” Anzalone said. “I didn’t realize how much that ceremony is a motivator for kids.”

Last year, the school held 10-person, socially-distanced ceremonies in its theater, Anzalone said, which ultimately allowed for more time with each student. This year’s split ceremony in the arena may allow for the best of both worlds, he added.

Anzalone credited central office staff for making the decision well ahead of the scheduled dates.

“There might be bigger problems in the world, but to seniors and their families, this was a big deal,” he said.

Desert Pines High School will hold its ceremonies at 4 p.m. and 8 p.m. on June 3 at Orleans Arena, according to a tweet from Principal Isaac Stein. Additional details will come next week, he said.

Stein told the Review-Journal that Desert Pines seniors had been looking forward to the announcement and were extremely excited to hear it.

“Our students have persevered and deserve the time to celebrate their excellence,” Stein said.

Last year’s ceremonies were held in nontraditional formats — including virtual, drive-up and drive-thru ceremonies — due to the COVID-19 pandemic, which closed school buildings in March 2020.

CCSD high schools reopened on a hybrid basis to seniors and freshmen over a year later on March 22 and welcomed back all other grades on April 6.

Statewide restrictions on gatherings have also eased in the last month, with social distancing requirements set to end on May 1. All Southern Nevada colleges also have recently announced plans for in-person graduation ceremonies.

Thursday’s statement from the district credits a series of community partners — including MGM Resorts International, Boyd Gaming and UNLV — for making the ceremonies possible.

Superintendent Jesus Jara said in the statement that he appreciated the patience of students and families as the district put the graduation plans together:

“The way our community partners and Student Activities Department have rallied together to provide venues for our families to experience a moment of pride as their young adults walk across that graduation stage is truly appreciated.”