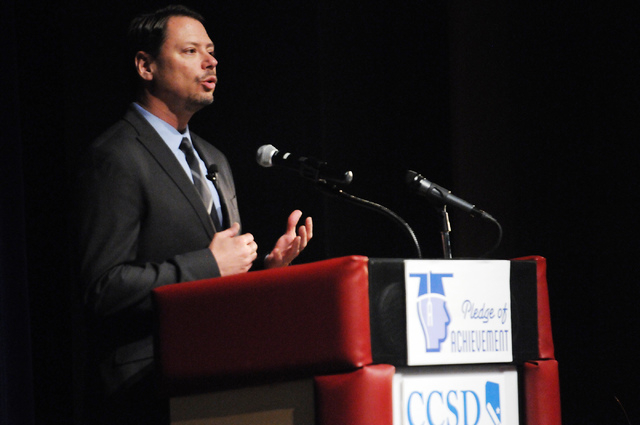 Superintendent Pat Skorkowsky’s first performance review was filled with praise Friday from his seven bosses on the Clark County School Board, who applauded the improvement in teacher morale. But board members also expressed concern over communication with the board and parents, whose children attend the nation’s fifth-largest school district.

“We’re not as transparent as we could be,” board member Carolyn Edwards said.

Jason Lamberth, who sat silently in the front row of the meeting, could testify to that. He struggled more than a month after his 13-year-old daughter’s December suicide to get any reply from Skorkowsky and his staff regarding claims that she was bullied at school, as she wrote in her farewell note.

When school district officials finally arranged a meeting, personnel told Lamberth they had no report of Lamberth’s daughter, Hailee Lamberth, being harassed. Only after Lamberth was tipped off did he request Hailee’s student file, finding officials had a record that she was harassed by another student exactly three weeks before her death.

The district also overstated its 2013 graduation rate, according to the U.S. Department of Education, exploiting a loophole in Nevada standards allowing the omission of struggling students placed in adult education. Skorkowsky requested permission from the state to omit these students, noting that it would “create upward movement for the state graduation rate” and bring the district’s graduation-rate increase to 10 percentage points, according to a December letter to the Nevada Department of Education.

“How can we really build community trust?” asked Edwards, who applauded Skorkowsky’s other efforts, especially in repairing the district’s relationship with its 18,000 teachers and their union, the Clark County Education Association. “That was sorely needed.”

Board member Linda Young agreed that the community’s “mistrust” of the district is an issue, but she joined other board members in mostly praising Skorkowsky.

Skorkowsky took the helm after two years of tense negotiations between his predecessor Dwight Jones and the teachers union. Teachers picketed outside School Board meetings. Union President Ruben Murillo even demanded at one of those meetings that former district Chief of Communications Amanda Fulkerson be fired.

Jones didn’t heed the demand, but Fulkerson resigned under pressure less than three months after Skorkowsky became superintendent. Under Skorkowsky, pay raises have been restored to teachers and arbitration avoided with their union.

“Morale has been amazing in its improvement,” said board member Patrice Tew, emphasizing how teachers trust Skorkowsky because he knows “what it’s like to be in the classroom.”

Skorkowsky is a 25-year district employee who started as a first-grade teacher and rose to become a school principal, district administrator and then super­intendent.

“This (morale) has been a big boost to us as we ask the staff to make changes,” said board member Chris Garvey in reference to the new academic standards, teacher evaluation system, student-data system and budget overhaul.

“We still need to work on communication,” board member Deanna Wright said.

Skorkowsky and staff have claimed the district’s new student-data system has had a “seamless” transition. But school workers know that’s not the case and have faced glitches in the switch, she said.

“We have to acknowledge that’s happening,” Wright said. “Pretending it’s not hurts our credibility.”

Skorkowsky said he accepts the School Board’s praises and its concerns.

“I hunger for the things we can improve upon,” he said.