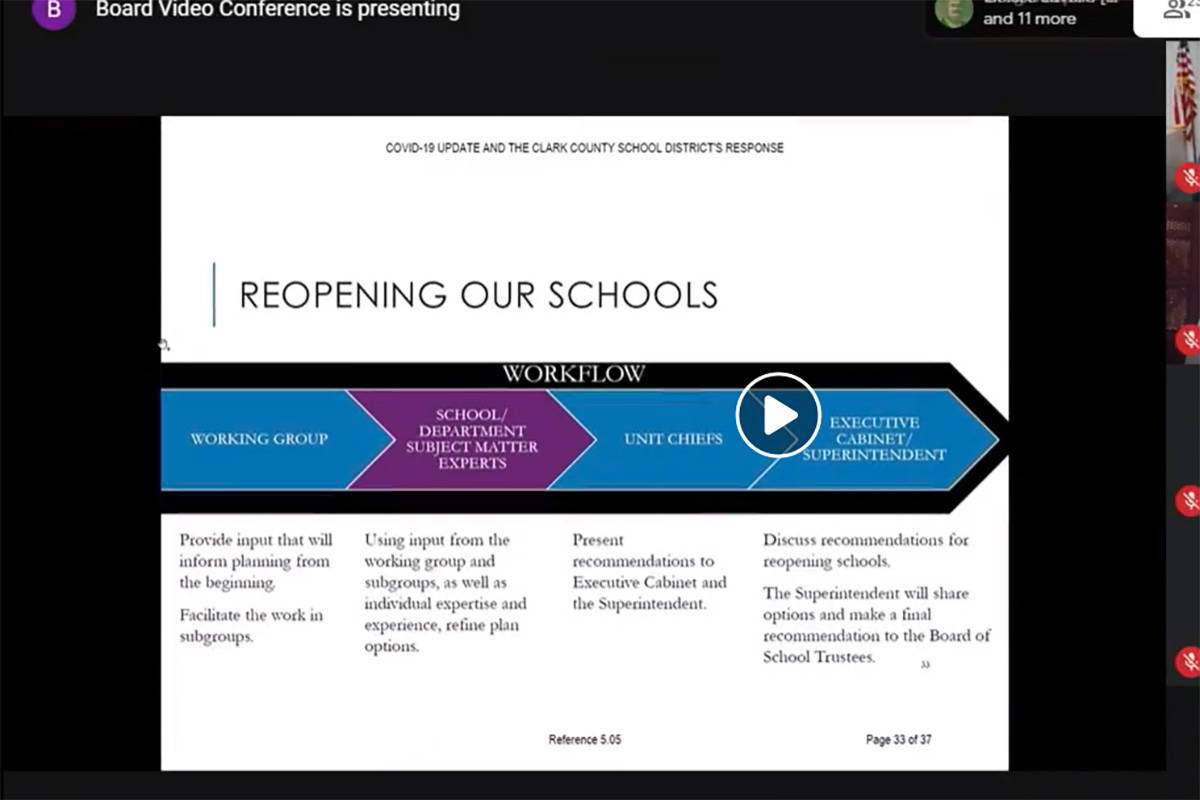 A Clark County School District survey presented to the school board Thursday night found that students, parents and staff strongly support a full-time return to in-person schooling over other options such as a blended school day or more distance learning.

The Reopening Our Schools survey found parents and students in particular strongly oppose distance education for the 2020-21 school year, as well as most blended learning options that would see students split their time between the classroom and home.

School staff, on the other hand, showed more willingness to adopt a blended learning model with half-day sessions, while returning to schools on a year-round calendar or after Labor Day drew mixed responses from most groups.

In terms of safety and social distancing measures, enhanced cleaning was a top priority for all, according to the survey, while staggering pick-up, drop-off and lunch times to reduce crowding was unpopular with students. A COVID-19 vaccine was less important to parents than students, who rated the vaccine among their top three mitigation measures behind cleaning and hand-washing.

School and central office staff largely indicated that all of the possible mitigation measures were important.

The results are based on more than 94,000 responses, according to the district, though respondents who have multiple roles at the district, such as teachers who are also parents, were counted more than once. They will be considered along with input from subject matter experts and other factors, including the status of the pandemic, in developing a plan.

Board president Lola Brooks said she expects the plan to come before the board at the June 25 meeting, adding that health guidelines and a structure for learning should be the most important factors under consideration.

“I think we’re going to need to be realistic about how much more prepared we need to be,” Brooks said. “We cannot have 360 schools doing 360 different things.”

Recommendations must be announced no later than 20 days before the start of school, according to an order signed by Gov. Steve Sisolak on Tuesday, which also allowed schools to reopen buildings for summer school. CCSD Superintendent Jesus Jara said Thursday he was surprised by Sisolak’s announcement.

In closing remarks, Jara also said that the lack of information on possible budget cuts was creating an undue burden on school principals, who will only have a few weeks to prepare for reopening if more information is not provided soon.

“Unless resolved, an inevitable delay of the start of the school year will be the result,” Jara said. “We need direction from our officials who have not only fiduciary responsibilities, but an obligation to lead.”

As part of the COVID-19 presentation, CCSD also provided a breakdown of students who could not be contacted during distance learning by ethnicity and socioeconomic status, a report trustees had requested in April.

Of a total of 4,370 students who could not be reached at all from the day schools closed on March 15 to the last day of school on May 20, just over 2,200 are Hispanic or Latino, approximately 1,100 are Black or African American and approximately 600 are Caucasian.

Students who identified as Asian, Pacific Islander, American Indian or two or more races represented fewer than 100 no-contacts each.

More than 2,700 qualified for free and reduced price lunch, and just under 1,000 received special education services, according to the presentation.

“I want to note that one student not reached was one student too many,” said Deputy Superintendent Brenda Larsen-Mitchell.

Outside of coronavirus-related issues, the board approved a request from Rainbow Dreams Academy Charter School to turn the school into a preschool and kindergarten program only, eliminating first through eighth grade, despite concerns from trustees about future accountability.

The board also approved updates to its policies regarding English language learners with an eye toward inclusion, in part changing language that said English learners “cannot effectively participate in general education instruction” until they master English to putting the onus on schools to “ensure that students with limited English proficiency meaningfully participate in educational programs and services.”

Trustees approved an annual $59,611 membership fee to the Council of the Great City Schools, an advocacy organization made up of 76 urban school districts across the country, with Trustee Linda Young abstaining.

“In the community I represent, we have not been happy with the Council of the Great City Schools,” Young said, citing issues of racism and bias in schools. “They did not represent us. Maybe they represent the rest of the district.”