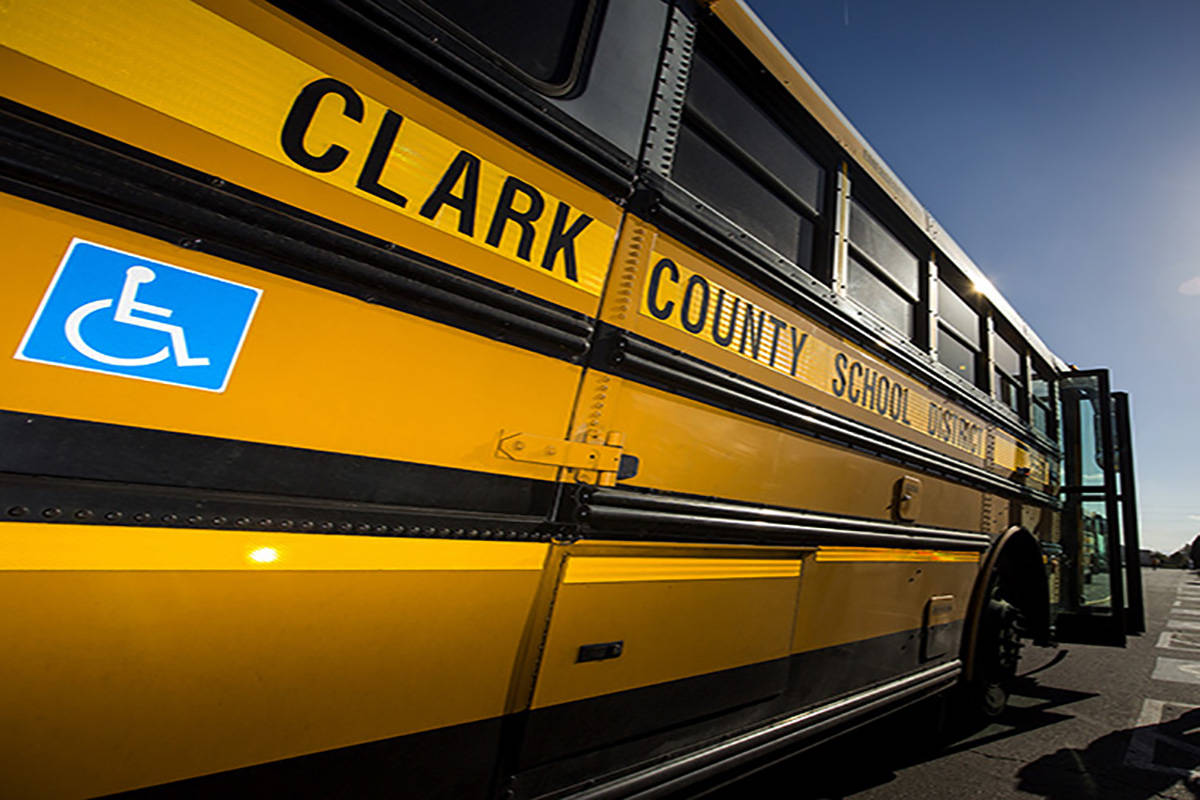 Clark County School Board trustees put off a vote Thursday night on a plan that called for bringing students back to campuses in January under a hybrid model, citing rising COVID-19 case numbers.

The Clark County School District, which has about 307,000 students and 40,000 employees, released a 205-page hybrid learning transition plan Monday. It has operated under fully distance learning since late August — with the exception of seven rural schools — because of the pandemic.

The School Board has been considering a hybrid model that called for students to attend classes in person two days a week and via distance education three days a week starting in January and allowed rural schools and small urban schools to get permission to provide full-time in-person classes. The plan also allowed parents the option of having their child continue with only distance education. And the district proposed having employees return to work sites Dec. 1.

In total, 787 pages of public comments were posted online before the start of the meeting. The majority of comments received were from staff and parents opposing a return to campuses.

After a presentation from district staff, School Board President Lola Brooks told her fellow board members: “Trustees, we’ve heard many concerns about reopening schools at this time.”

Brooks and Superintendent Jesus Jara recommended the board not take action Thursday night. They did not pull the agenda item because the board already pulled the discussion once and didn’t want it to appear the district wasn’t planning for a resumption of in-person learning, Brooks said.

The board’s decision comes as COVID-19 case rates are rising this fall. Gov. Steve Sisolak on Tuesday urged Nevadans to stay home as much as possible and for employers to encourage remote working.

The school district announced Wednesday it would transition many of its employees to telecommuting through the end of the month.

Jara told the board Thursday night that he will direct the district’s chiefs to continue planning to reopen schools. The timeline for reopening will be determined based on case numbers and health information provided by the Southern Nevada Health District, he said.

He said his message to the community is that the district and School Board hears and understands them, and they too want to see children back in school. He said the district will make it happen in a way that is safe for all.

Jara said he wants to tell employees the work they’ve done is inspiring and will not be in vain. “Your dedication, flexibility and patience give me hope.”

Jara said the amount of change in education as a result of the COVID-19 pandemic has created a destructive ripple effect for the school district.

“COVID-19 has destabilized our educational structure and highlighted the inequities that have existed in urban education for many years,” he said. “Make no mistake, we are suffering here in Clark County and as we enter into the winter months, our challenges will increase exponentially, but the future of our children is on the line.”

Jara said he recognizes it sends mixed signals when the governor urges Nevadans to stay home while the school district was weighing reopening, but that he agrees with the governor’s decision.

He said the school district is the second largest employer in the state and will do its part to help lower coronavirus case numbers.

Trustee Danielle Ford asked for clarification on the earliest date when employees might return to work sites. Jara said he doesn’t have an answer to that and doesn’t have a crystal ball.

“That doesn’t really sit well with me,” Ford said, noting she believes it’s within the school board’s purview to determine whether it’s safe for employees to return to schools.

Deputy Superintendent Brenda Larsen-Mitchell told the board: “Currently, we are in the midst of a health crisis, a mental health crisis and an academic crisis.” She said the district must “protectively develop a plan to get our students back with their peers and their adult educators.”

The deadline for parents to fill out a survey indicating whether they will send their child back under a hybrid model or stick with fully distance education has been extended to 5 p.m. Nov. 20. Parents will get one opportunity to change their selection before that deadline.

Clark County Association of School Administrators and Professional-Technical Employees sent a letter Wednesday to the School Board asking for the agenda item about the hybrid learning plan to be tabled.

Comments from the board

Brooks said the reopening decision is too important to rush and the health data isn’t favorable at this point. She said she thinks it’s important to give the decision a little more time and resolve as many issues as possible before the plan is finalized.

She said that her recommendation is reframing the plan as a series of steps and that it shouldn’t be tied to specific dates — which gets peoples’ hopes up — unless there is a very clear reason to do so.

Brooks also said that distance learning can be very frustrating and some parents might choose hybrid education out of sheer desperation because students are struggling so much.

Trustee Chris Garvey said: “I’m a little disappointed that we’re not going to make any kind of decision tonight as a board.” The plan states it’s a living document that can be modified as more information comes in, she said.

Garvey said her fear is that they’ve basically committed children to be in isolation for the rest of the school year.

Garvey asked for an update from district staff on financial impacts. She said it’s a topic that’s incredibly painful for her, but the district has been paying many employees who can’t do distance work jobs and “the public that pays that salary is now starting to get a little concerned about it.”

Jara said he'll be directing CCSD chiefs to continue planning to reopen schools. The timeline will be determined based on COVID-19 case numbers and health information provided by the health district.

Superintendent and board chairwoman are recommending the board not take action on the plan at this point.

Chief Operating Officer Mike Casey: School bus drivers would have to wear a mask and face shield, but remove their face shield while driving. Bus capacity would be limited to 50 percent, which equates 28 students per bus or four to six for a special education bus.

Director of Health Services and Chief Nurse Yvette Wintermute: The recommendation from the health district is if one student tests positive for COVID-19, their whole class would be quarantined, along with staff that was in contact with the student.