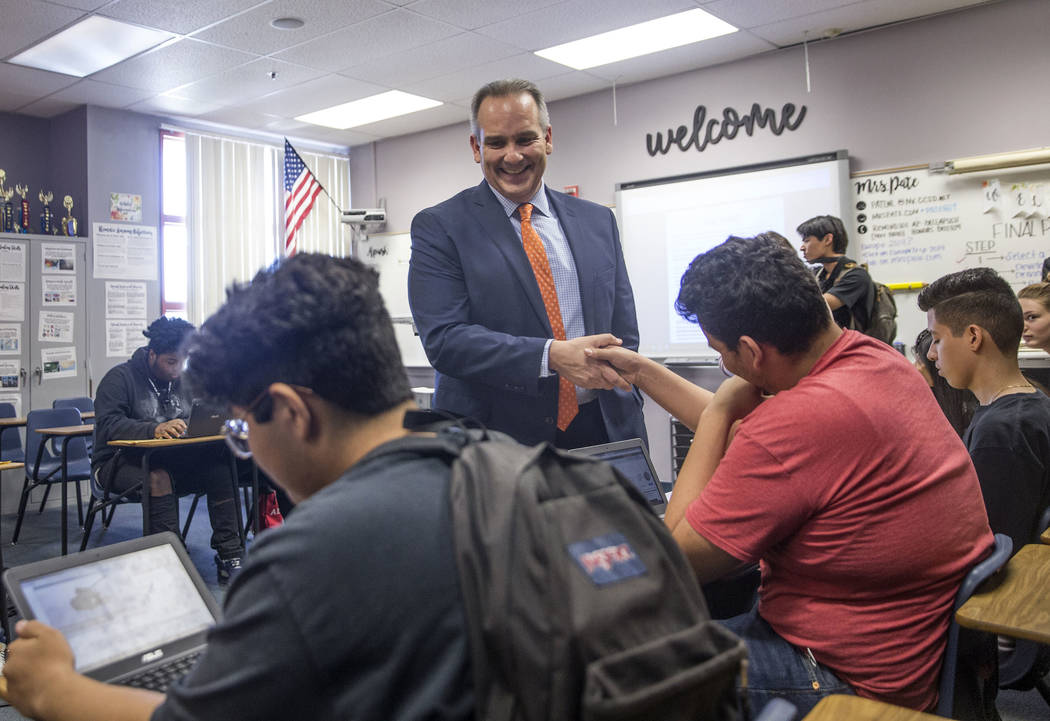 The first meeting for Clark County School District Superintendent Jesus Jara was rife with the same underlying tension among School Board members on Thursday, as trustees split over a decision on whether to hire a new deputy superintendent and chief of staff with higher salaries.

Jara, who proposed hiring two colleagues from his former district of Orange County Public Schools in Florida, observed as the board members once again bickered with each other over salaries, transparency and support for the new leader.

The board voted 4-3 to hire Diane Gullett, a current area superintendent in the Florida school district, to replace retiring Deputy Superintendent Kim Wooden. Her salary will be $160,692. The same vote held for hiring Jennifer Cupid-McCoy, a principal in Florida, as chief of staff with a salary of $145,860.

Officials identified about $75,000 to pay for the months in which both Gullett and the Wooden — who is retiring in November — are both on the job.

Some trustees took issue with not being notified of how the district was shuffling money to pay for the positions.

“I’m having difficulty with this right now,” Garvey said. “One, our newly appointed superintendent having a conversation with our current superintendent and asking for additional funds to be woven into our budget.”

Jara said money for the chief of staff position was created through the elimination of three vacant positions: an associate superintendent, a director in the community and government relations department and a coordinator in the deputy superintendent’s office.

“For your two people coming in, the reason I have a problem with this is I wasn’t informed and I can’t inform my constituents,” Young said.

Garvey also voiced concern over the salaries for both posts, which are higher than the current deputy superintendent’s salary and longevity pay of $152,120 — according to Wooden’s 2016-2017 contract — and the former chief of staff’s salary of $124,560 spelled out in a 2014-2015 contract.

More recent figures from the district show Wooden now makes $161,492 in salary and longevity pay, and Neal’s last salary as chief of staff was $137,472.

But Wright pushed back.

“I unfortunately think we are really undermining our absolutely brand new superintendent by telling him the first vote, the first thing he’s asking for right off the bat, is no,” she said.

Jara, who clarified that the role of the new deputy superintendent will be different, said his team will not get any raises until other employees do.

“I want to be very clear that if our employees, support staff, teachers, administrators do not get a raise, I will certainly — and my staff — will not get a raise,” he said.

Both new employees start work in Clark County on Sunday.