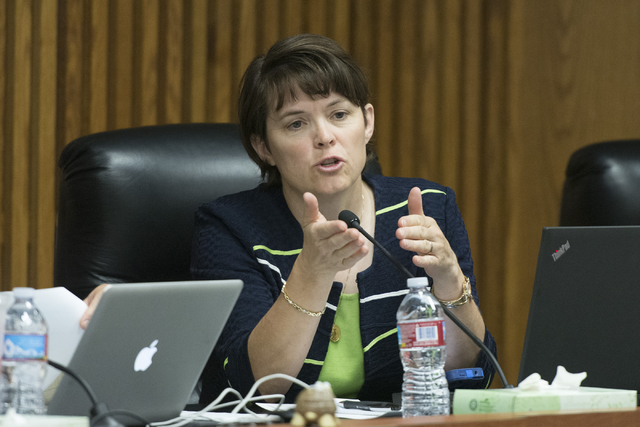 Clark County School District Board of Trustees member Erin Cranor speaks during the CCSD board meeting to approve the district's final budget for the 2016-17 academic year at the Greer Education Center in Las Vegas Wednesday, May 18, 2016. (Jason Ogulnik/Las Vegas Review-Journal)

The Clark County School District fired back against the hiring of a consultant to assist in the district’s reorganization, arguing that proper fiscal requirements were not followed in contracting with the TSC2 Group.

The move to hire the group for a maximum of $1,188,000 came in a 5-2 vote last week by the Advisory Committee for AB394, the state legislation that mandates the reorganization. The committee also created a volunteer Community Implementation Council to help the district with reorganization.

The consultant hire was a decision that surprised the school district, which is required through state regulations to pay for the consultant.

In a statement read Wednesday at the first meeting of the council, District Trustee Erin Cranor argued that the requirement to pay TSC2 Group nearly $1.2 million is “contrary to the Legislature’s original intent” of the law that requires the overhaul of the nation’s fifth-largest school system.

Cranor said there is no reason to treat this transition consultant differently from the former consultant hired to develop the reorganization plan. That consultant, Michael Strembitsky, was paid through the state.

“Even if the Advisory Committee had the authority to require the district to pay for the consultant, which the district does not concede, the CCSD board has fiscal requirements and a process for funding such a consultant,” she said. “And that process clearly has not been followed here.”

The district’s Board of Trustees is also concerned about the lack of relevant K-12 management experience of TSC2 Group and some council members, Cranor said.

The TSC2 Group will report to the newly formed Community Implementation Council, a volunteer group headed by former Station Casinos executive Glenn Christenson that will assist the district with the transition.

Cranor is the school district’s only representative on the council. But in a move that illustrates the discord, the Board of Trustees is considering whether or not to keep its seat on the council.

Until then, Cranor said she will attend meetings as a courtesy.

The statement was news to both Christenson and TSC2 Group President Tom Skancke, though both asked for the community to work together.

“It’s critically important that this community get behind this effort,” Christenson said. “I recognize that there’s some folks who have differences of opinion about how this thing should work — let’s figure that out.”

Christenson tried to put the $1.2 million — which he said was the maximum authorized expense for the consultant — into perspective.

He noted that the district has more revenue than Boyd Gaming, with $2.4 billion, and more employees than Anthem Blue Cross and Blue Shield’s national workforce.

“Some may say that’s a lot of money, and it is,” he said of the authorized $1.2 million. “But organizations the size of the Clark County School District are very complex, and in my experience in business, I’ve seen and been a part of turnarounds and reorganizations that cost orders of magnitude more than this.”

Skancke acknowledged that people have uncertainty and fear about the reorganization.

“I promise you we’re going to build consensus and try to bring everyone to the table,” he said. “That’s why our outreach scope includes talking to hundreds of stakeholders. We will work with everyone, including our critics.”

Republican state Sen. Michael Roberson, who chairs the Advisory Committee made up of state legislators, said the requirement for the district to pay for the consultant is not an opinion — it’s state law.

He also said that individuals who falsely claim to speak for parents and children are really just apologists for the status quo.

“The school district bureaucracy cannot and will not reform itself,” he said. “The naysayers know this, and that’s why they oppose what we are doing. They are afraid we will succeed.”

The reorganization to be implemented for the 2017-18 academic year will give more power to schools, decentralizing the system through a method that includes allowing each school to craft its own budget.

Parents also came to the meeting to call for parental representation on the council.

Lisa Mayo-Deriso of the Break Free CCSD reform group urged the council to add at least two parents to its ranks.

If not, she argued, promises of working together are just a charade.

“I think it’s shameful, and I would hope that you would change that moving forward,” she said.

She also said a request for proposals was necessary for a contract of that magnitude.

The ACLU of Nevada, which has expressed concerns over AB394’s open meeting law exemptions, also continues to have issues with the legislation.

“After what was revealed today, we continue to take issue with the transparency of how this new committee was created, why it was created, and why there would be a necessity to spend over $1 million for services that it appears the Clark County School District does not need,” said Executive Director Tod Story.