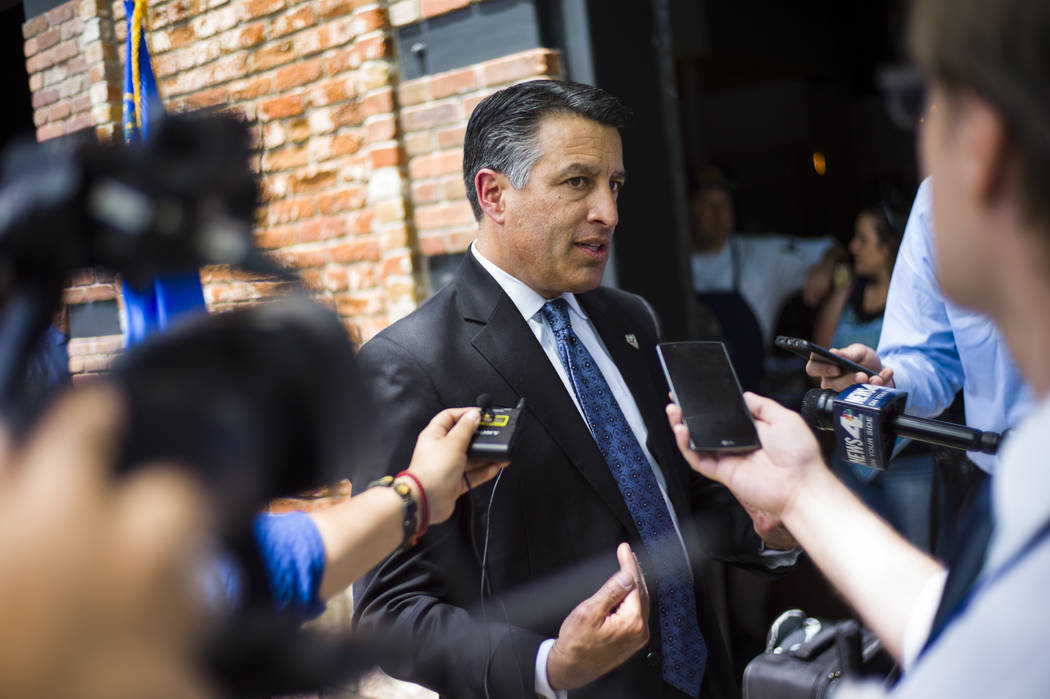 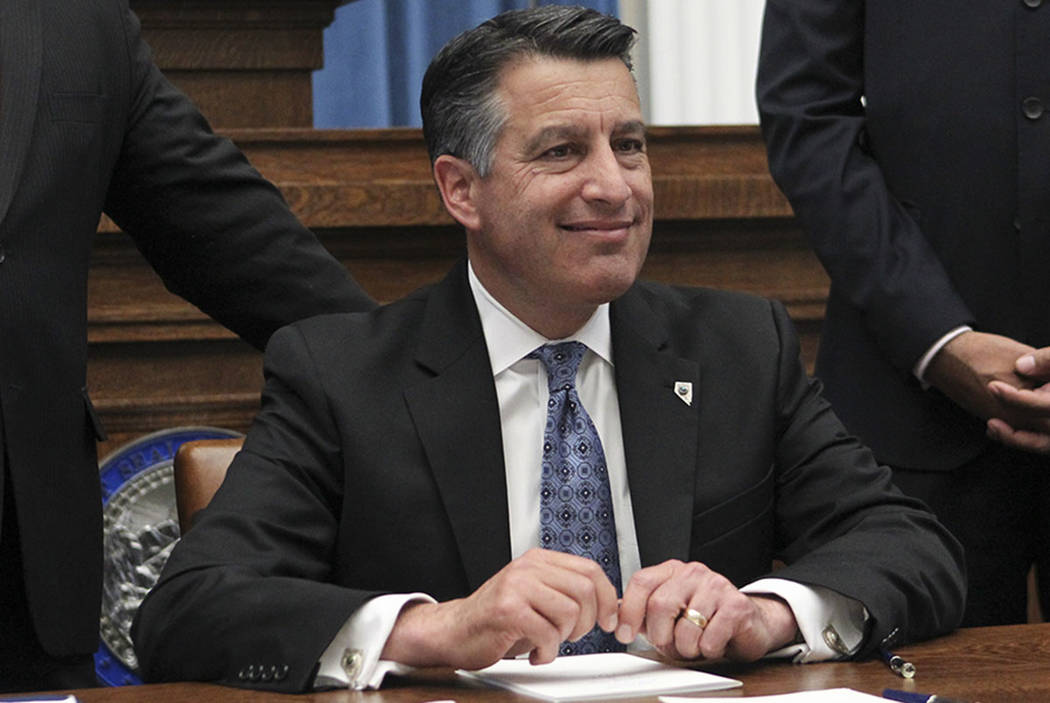 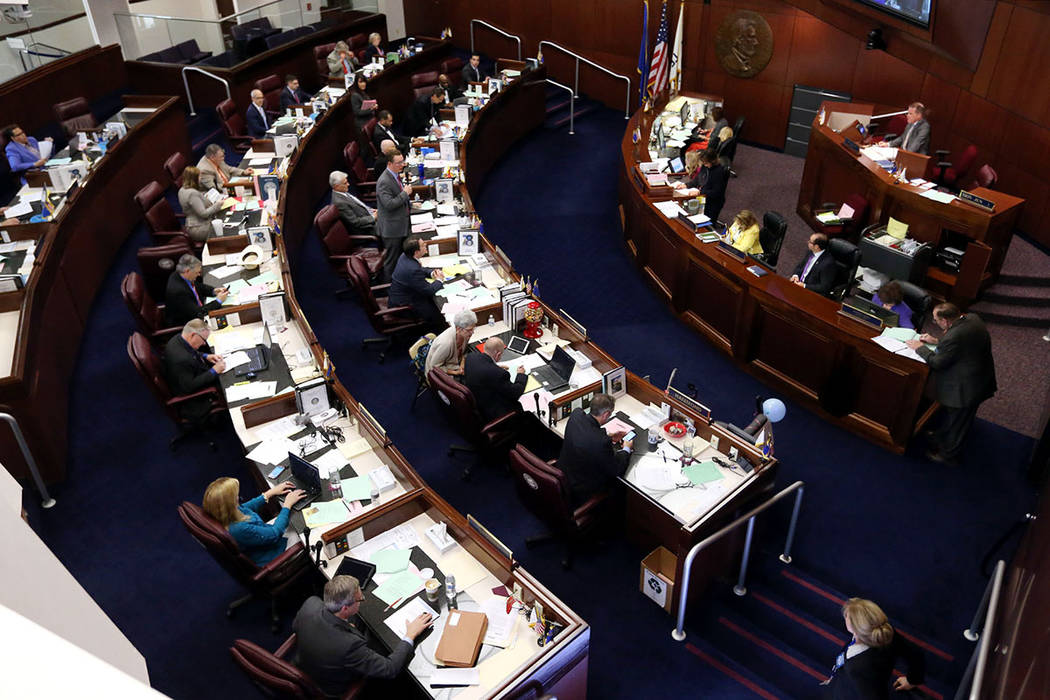 The Nevada Senate works in the final hours of the session at the Legislative Building in Carson City, Nev., on Monday, June 1, 2015. (Cathleen Allison/Las Vegas Review-Journal) 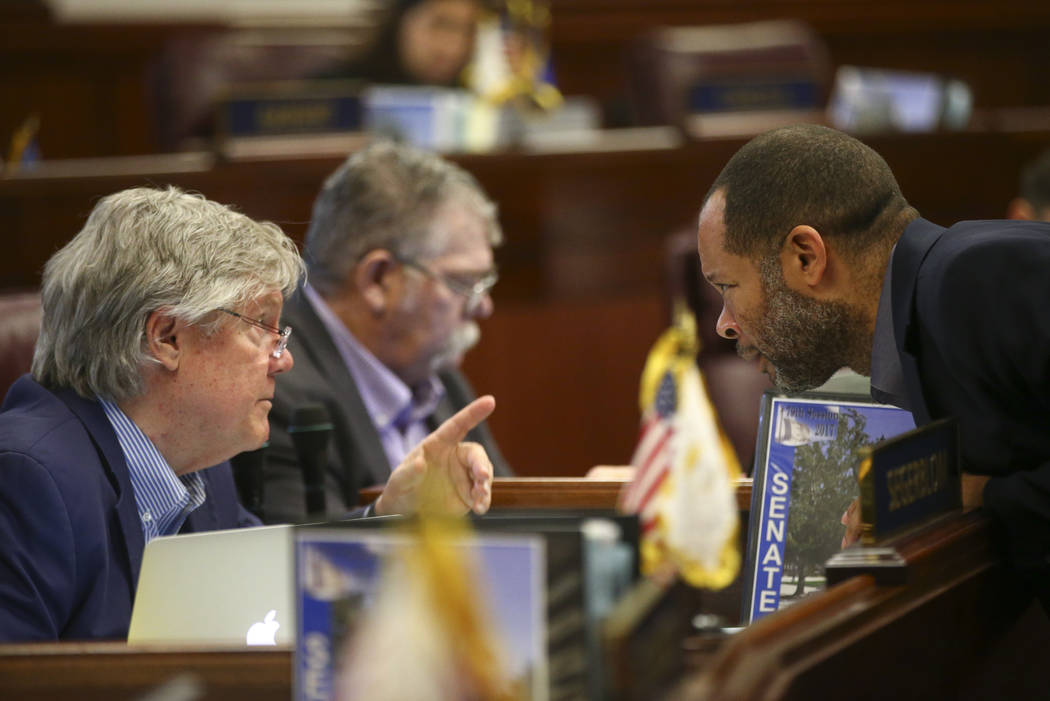 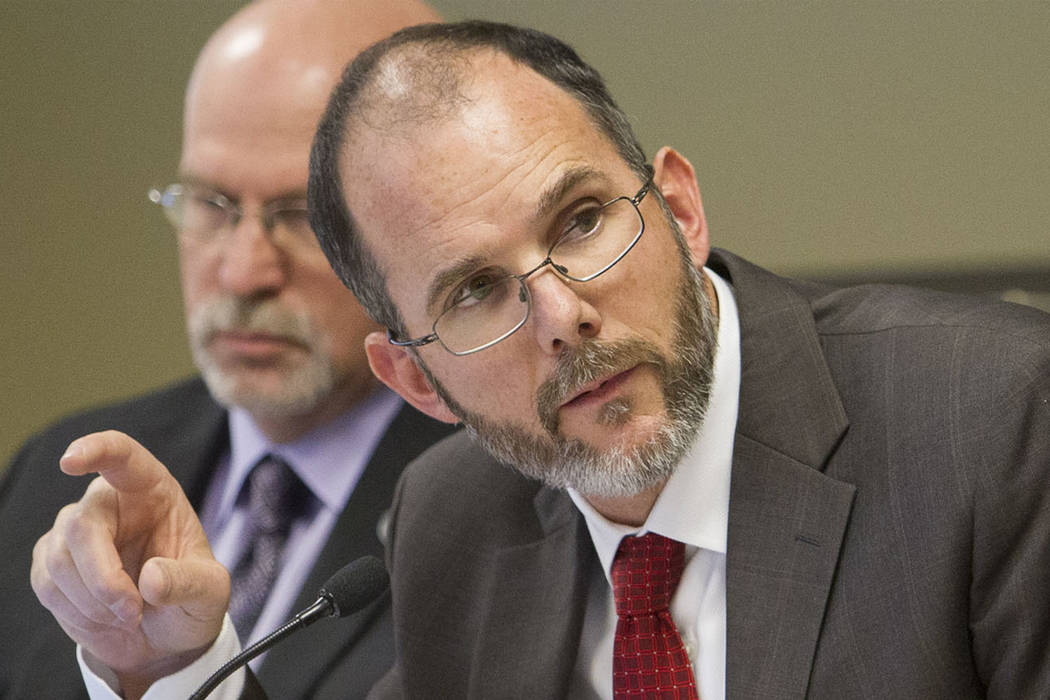 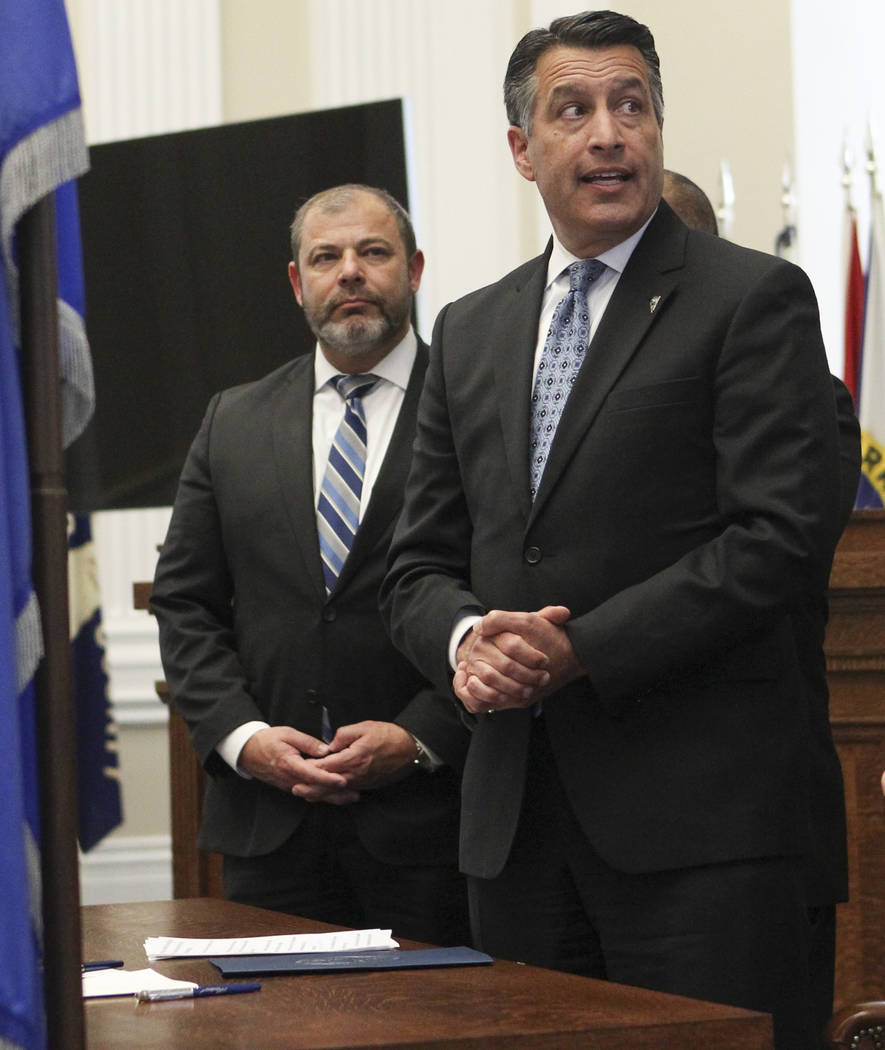 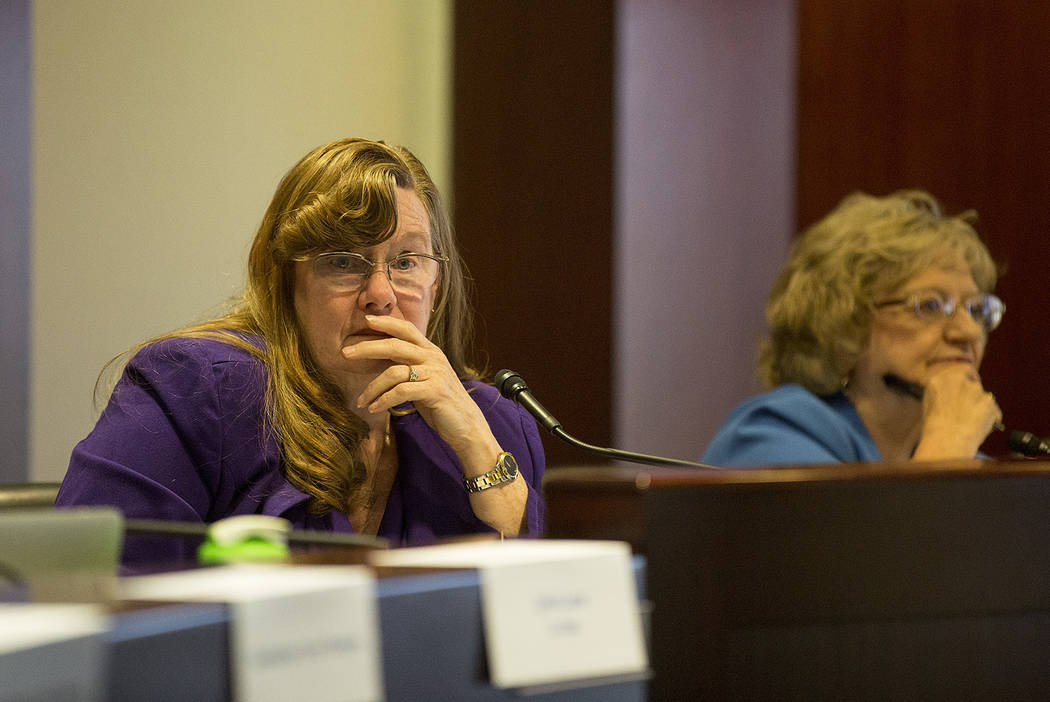 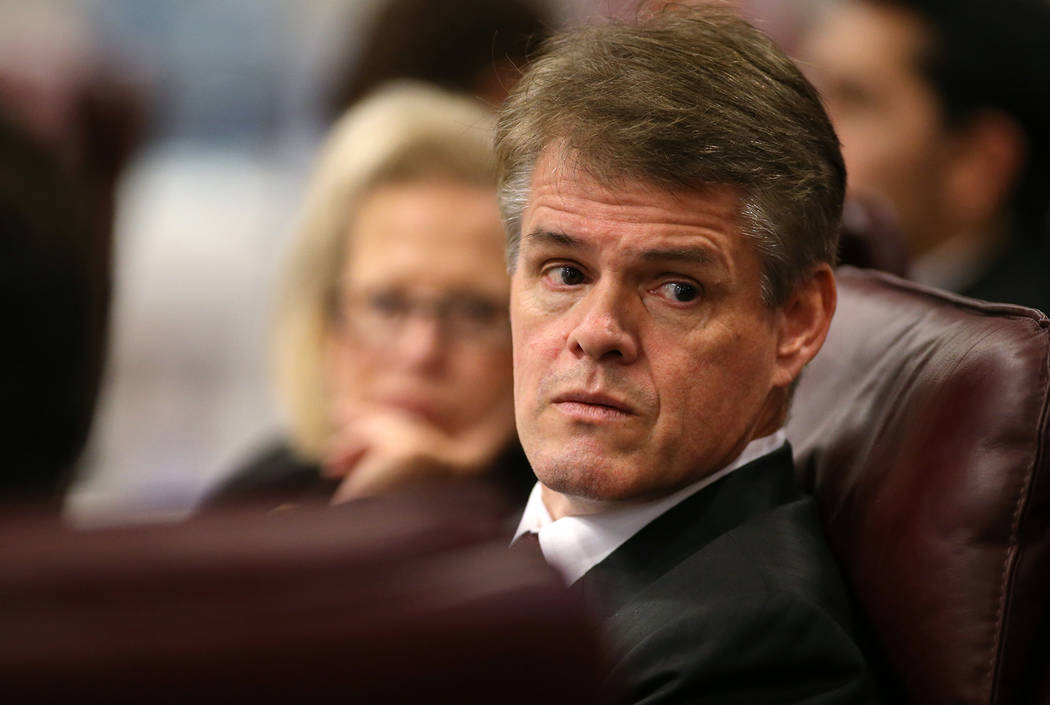 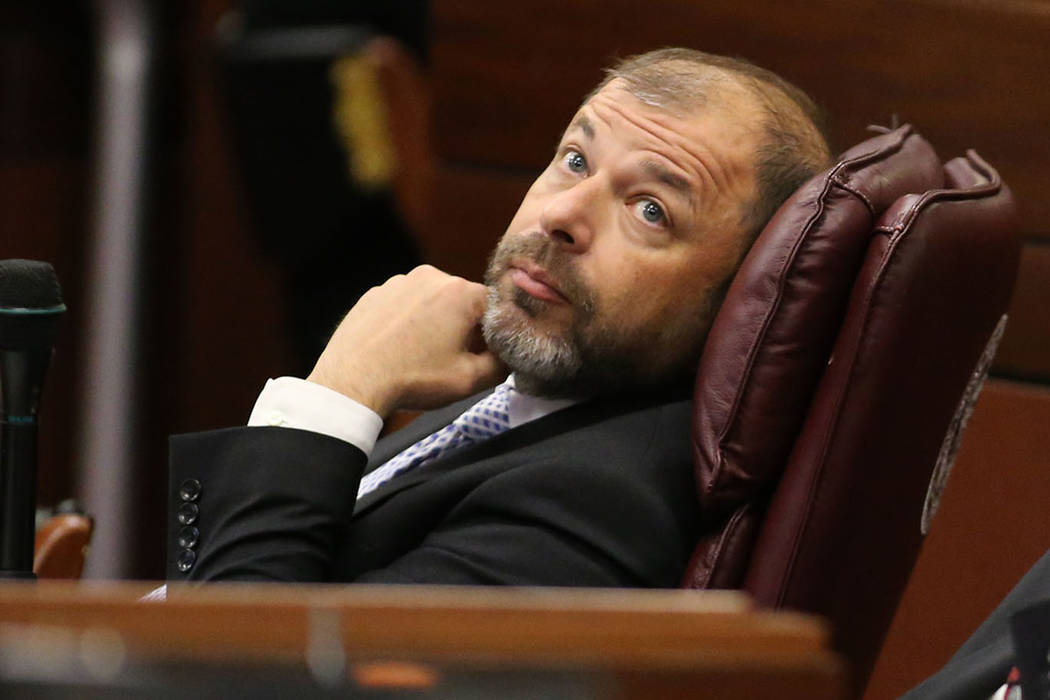 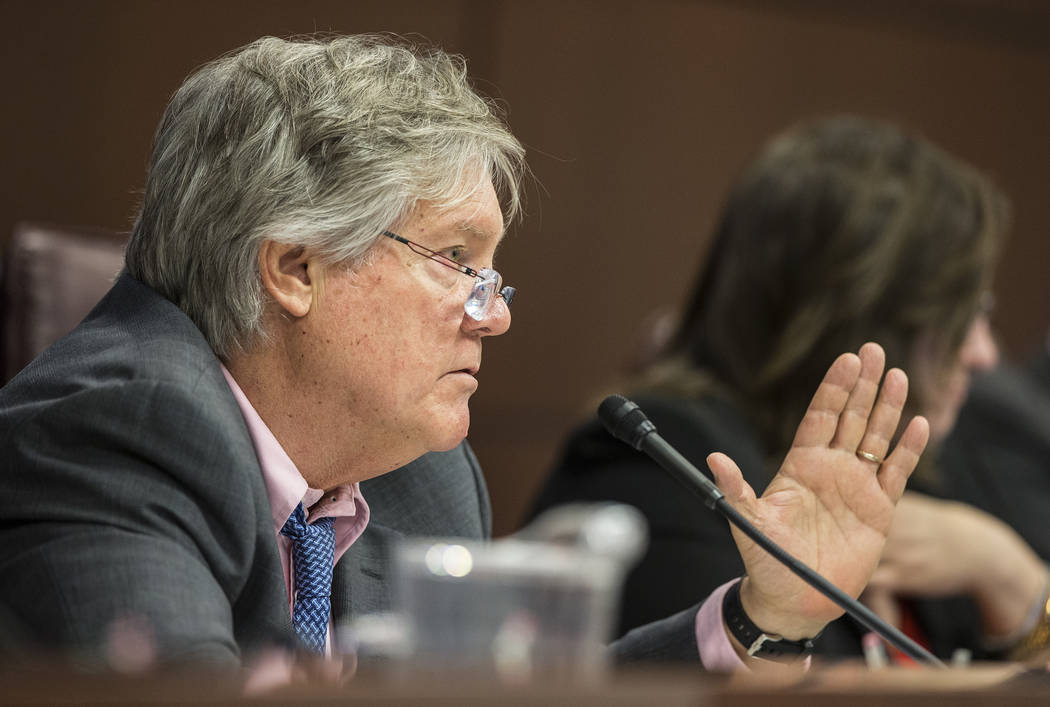 In this Feb. 7, 2017 file photo, Sen. Tick Segerblom, D-Nev., addresses attendees at the first meeting of the Senate Judiciary Committee on the second day of the Nevada Legislative session at the Legislative Building in Carson City. Benjamin Hager Las Vegas Review-Journal @benjaminhphoto

Gov. Brian Sandoval’s $1.5 billion tax package in 2015 was intended to boost Nevada’s standing and demonstrate its investment in public schools.

The nation’s fifth-largest school district has a deficit that school officials have estimated will require cuts of $70 million to $80 million. The staggering figure is forcing the school district to make tough choices about how many positions to eliminate, what’s essential and how to right-size the district, even as increased state dollars continue to pour in.

The development has caught state policymakers by surprise, from the governor to rank-and-file lawmakers. In an interview, Sandoval insisted he and the Legislature “did right by the Clark County School District.”

“We have added hundreds of millions of dollars to the education budget since my tenure as governor,” Sandoval told the Las Vegas Review-Journal. “We have established Victory schools, we have established Zoom schools, Read by 3, all that programming that came along with the money to do those things.”

In a letter to inquiring constituents concerned about the deficit, Sandoval points to the state’s increased investments: $470 million statewide during the last two sessions and $98.35 million more for the Clark County School District for the current two-year budget cycle. In his letter, Sandoval said he doesn’t agree with the premise that funding is insufficient.

Of course, the Legislature and governor don’t set individual school district budgets and expenses. That happens at the local school district level, with funding that includes state, local and federal dollars. At the state level, the Nevada Department of Education divides the pie of available state funding among school districts based on factors such as enrollment growth, and each school district’s local funding, like property taxes and sales tax.

Sandoval noted that per-pupil spending in Nevada has “gone up dramatically” during his tenure as governor.

“Can we do better? Do I want to do better?” he said. “Of course. I want to do everything I can for our education system, and I think we’ve done a lot.”

The deficit crisis has led to everything from calls for a forensic audit of CCSD to putting tax dollars from recreational marijuana sales toward education.

Neither one will provide a quick fix.

Sandoval is not ready to call a special session to divert marijuana tax revenues to education to fix the school district’s budget woes. The governor had originally proposed putting recreational pot tax revenues into the state’s public schools budget, a move that was scuttled by lawmakers in favor of putting the dollars into the state’s rainy day fund.

“I think there needs to be some in-depth analysis to what the root cause is of the Clark County School District budget before you even consider whether to have a special session,” he said.

State Sen. Tick Segerblom, D-Las Vegas, said there may be an opportunity to divert some of the taxes from recreational marijuana sales directly to the school district to help avoid layoffs.

“We’re in a crisis,” he said. “The budget problems are serious. We’re talking about people losing their jobs.”

Nevada State Superintendent Steve Canavero said it’s important to “obtain some answers” about the reasons for the deficit.

“We’re still asking additional questions at this point,” he said.

But Canavero stressed that it’s not within the Nevada Department of Education’s scope to fix the district’s budget.

“I don’t have a checkbook, if you will, that I can write checks out of,” he said. “The budget’s passed.”

Sandoval and lawmakers say the district didn’t raise any red flags about its budget outlook during the 2017 session, when the state’s spending levels were being set.

“The budget issues they are having right now are as big a surprise to me as everybody else,” Sandoval said. “And it’s unfortunate because I don’t want to see any kids or teachers get hurt by that. But this all happened after the end of the Legislature. Nobody came to me during the session and said we’re looking at a budget deficit.”

The Washoe district claimed to have a shortfall based on legislative funding levels, which did not turn out to be accurate, said Assembly Ways and Means Chairwoman Maggie Carlton, D-Las Vegas, who chaired the joint Senate and Assembly budget subcommittee that reviewed and approved the public schools budget. Even so, the district was given $5 million in additional funding.

A Washoe County School District spokeswoman refused to comment on her district’s budget and deficit.

Clark County School District officials don’t dispute that they’re getting more money. They also say they didn’t get as much of an increase in funding as they wanted.

The district asked for $180 more per pupil in the 2017 session and received $126 more, said Nicole Rourke, the district’s head of community and government relations. With a projected enrollment of 323,380, the school district would have received nearly $17.5 million more in funding if the $180 per pupil request had been met in its entirety — still far short of the deficit CCSD is facing.

As for that historic tax increase passed in 2015, Rourke said those funds are good for specific services for students, but they aren’t flexible. Those specific uses include Zoom schools and Victory schools tailored toward boosting student achievement.

“They distributed those funds to us in a categorical way,” said Rourke. “While the categorical funds provide great services for our kids, they don’t keep the lights on.”

From the state, Clark County School District gets $5,700 per student. But that’s just part of the overall funding picture. When factoring in local and federal funding sources, the per-pupil funding this fiscal year is $8,583, according to school district figures.

Nevada State Department of Education figures are slightly different and show CCSD has an estimated per-pupil spending of $8,561 for this fiscal year, up from an estimated $8,501 in the previous fiscal year.

Either way, that’s about $600 less than the statewide average. The two-year budget approved this session has a statewide average per-pupil spending of $9,183 in the current fiscal year — up significantly from an average $8,328 in fiscal year 2014 before Sandoval’s tax package was approved.

Assemblyman Chris Edwards, R-Las Vegas, is calling for a forensic audit of the Clark County School District by an independent, outside party. The public deserves answers, he said, adding that the current deficit situation “makes no sense.”

“We need to find out where the money is going,” he said.

Outgoing Assembly Republican Leader Paul Anderson, who resigned last week for a position with the governor’s Office of Economic Development, noted that the district’s deficit figures have been constantly changing.

“It sure seems to me like they don’t know how much they need to be successful,” he said.

Carlton said a number of factors appear to have converged to create the deficit.

Issues in play this year include the early projections used by lawmakers to close the K-12 budget, which did not end up being totally reliable, she said. Some of the vacancy savings that the district used to have at its disposal to address budget problems are now staying with individual schools as a result of the reorganization, Carlton said.

Also, more of the funding directed to the school districts is categorical and cannot be moved around to deal with shortfalls, she said. Carlton is also concerned about the district’s low reserve to deal with budget issues.

“I think the Legislature did a good job with the numbers we were given.” she said. “The schools are funded at a higher level.”