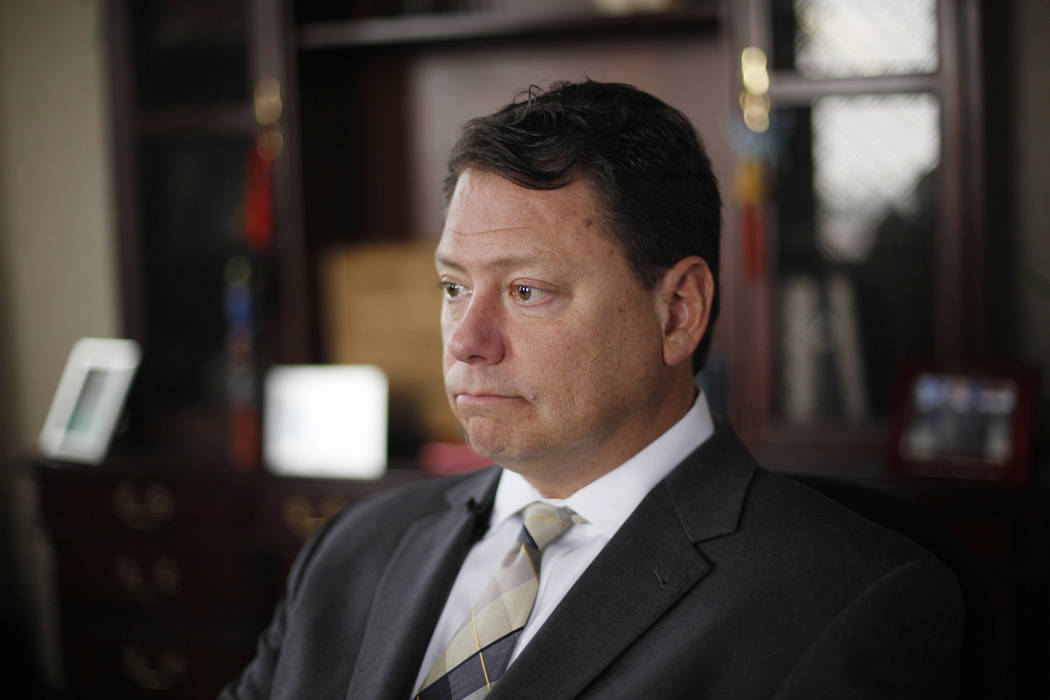 The Clark County School District has frozen hiring for nonessential employees, including teachers, as it grapples with a budget deficit that may require $70 million to $80 million in cuts, according to a memo sent to principals on Wednesday.

“We anticipate a reduction in force in October 2017 and … it is likely that almost every department and school will be affected,” it said.

The amount of cuts needed to balance the district’s 2017-18 budget is higher than the $50 million to $60 million current estimated deficit discussed at last week’s School Board meeting. Trustees at that time approved a plan calling for roughly $43.3 million in cuts.

That’s because the district has been spending money on services during the first few weeks of the school year that will add to the total shortfall, district spokeswoman Kirsten Searer said.

“The shortfall is still $50 to $60 million,” Searer said. “The thing is, now we need to identify additional cuts, because some of the cuts that we are making we’re paying for right now.”

Meanwhile, district staff and school organizational teams will continue to develop a plan to reduce the deficit while awaiting a final reckoning when the district closes out its 2016-17 finances.

“We are hopeful that we will not need to make the full $80 million in cuts, but we want to be prepared for unknown challenges,” the memo from Skorkowsky and Goudie said.

The freeze covers all nonessential positions — jobs that are not funded by grants — including open teaching and support staff jobs. It does not include school-based positions funded by a new law that provides extra money for underperforming schools with high percentages of English language learners and students in poverty.

The School Board could discuss whether to end the freeze at its Sept. 14 meeting.

The board has already allowed the superintendent to initiate layoffs — or a reduction in force — as necessary, but it is unclear how many positions could be cut. While senior school district officials will trim $11.8 million from central services, individual schools are responsible for reducing their strategic budgets by $17.4 million.

Those school cuts cover part of the financial impact for pay increases for administrators, which include principals, assistant principals and deans. The average salaries for those positions can now range from $91,962 to $171,017, an Aug. 28 district memo shows.

Principals and their school organizational teams will determine how to absorb those cuts.

Principals, who have been receiving deficit updates through central office memos, have watched a bad situation grow worse.

“At the end of the day, class sizes are going to go up,” Palo Verde High Principal Darren Sweikert said. “When a cut this large comes around, it means human beings are being cut.”

District officials say the deficit stems partly from red ink carried over from the district’s 2016-17 budget. State funding for special education and full-day kindergarten also came in lower than anticipated, and the district lost an arbitration ruling in a contract dispute with the administrators union, which cost it an extra $25 million.

Skorkowsky and Goudie said in the memo that costs in the rapidly growing district also have outpaced increases in state funding for education.

“Over the past few years, the revenue increases we have received from the state, from county property taxes and from the sales tax have not allowed us to keep up with our rising employee costs and other increasing expenses,” it said.

Labeling the administrator union’s arbitration award as a key component to the deficit is disingenuous, said Stephen Augspurger, executive director of the Clark County Association of School Administrators and Professional-Technical Employees.

“This has to be the accumulation of misspending, misappropriation, underestimating costs for more than a two-year period,” Augspurger said. “I don’t think you get this kind of budget deficit in a single year.”

The deficit, originally estimated at $34.5 million in July, has sparked criticism and questions about the budgeting process.

“How does that happen? That can only happen in one way,” Augspurger said. “Somebody’s not minding the store.”