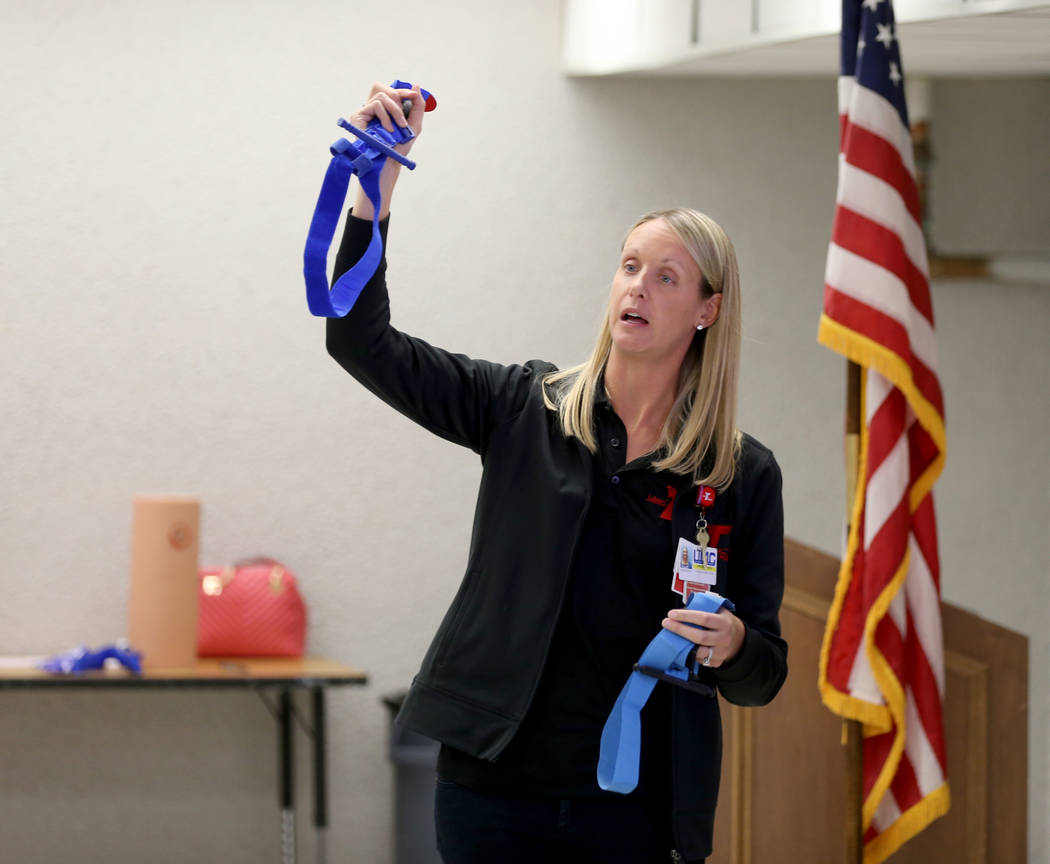 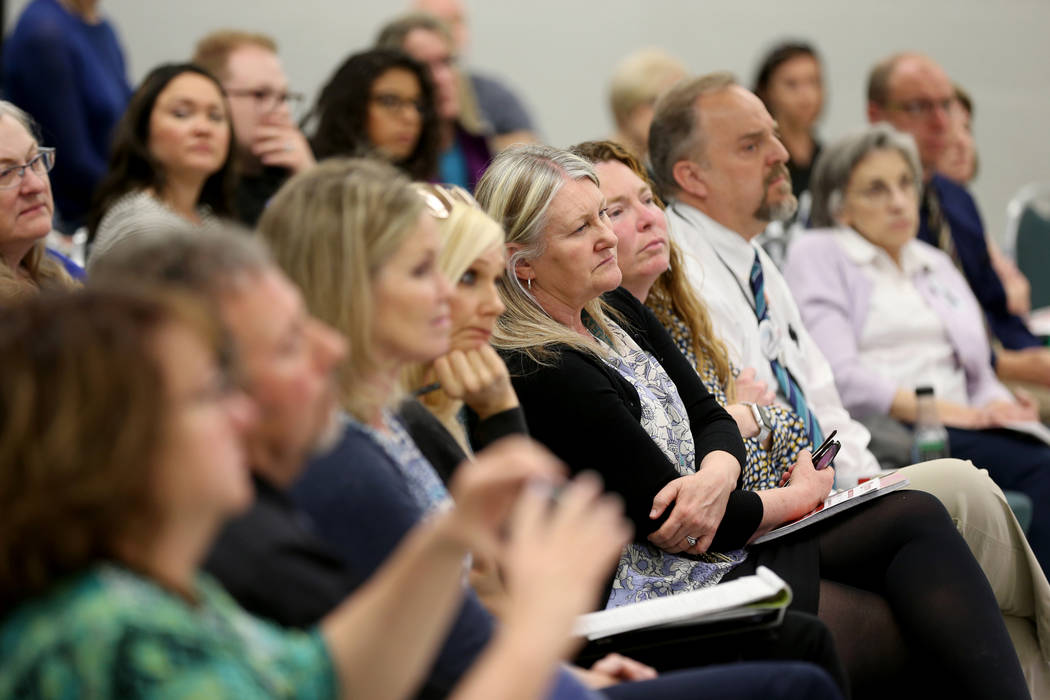 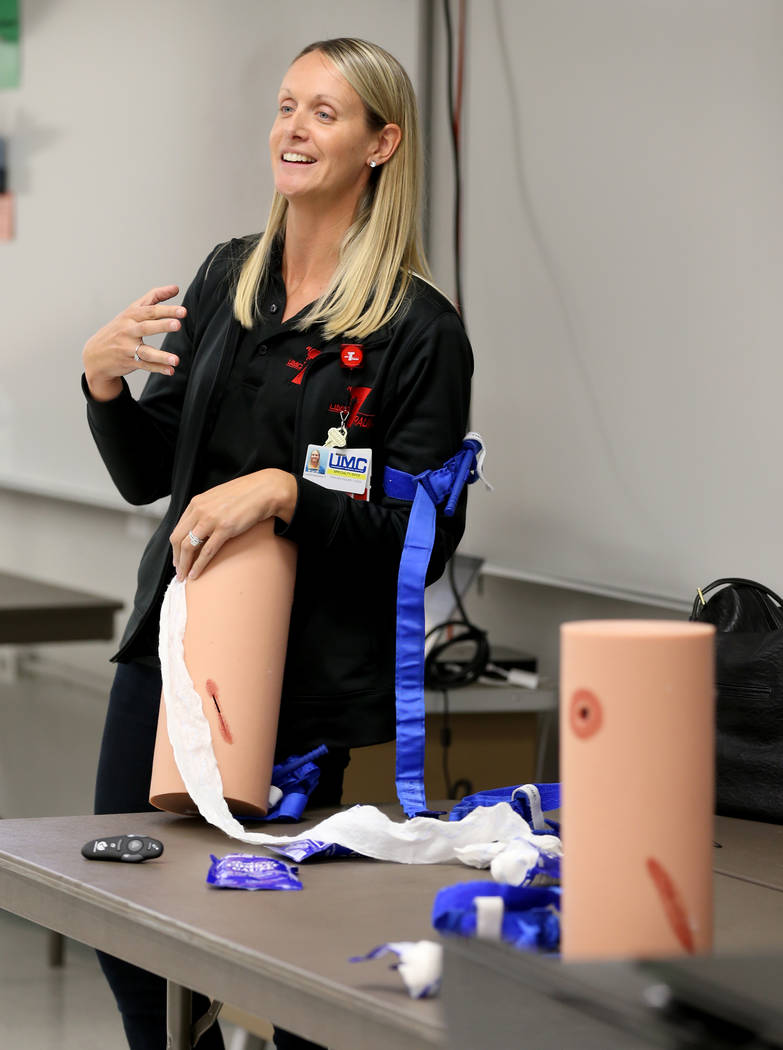 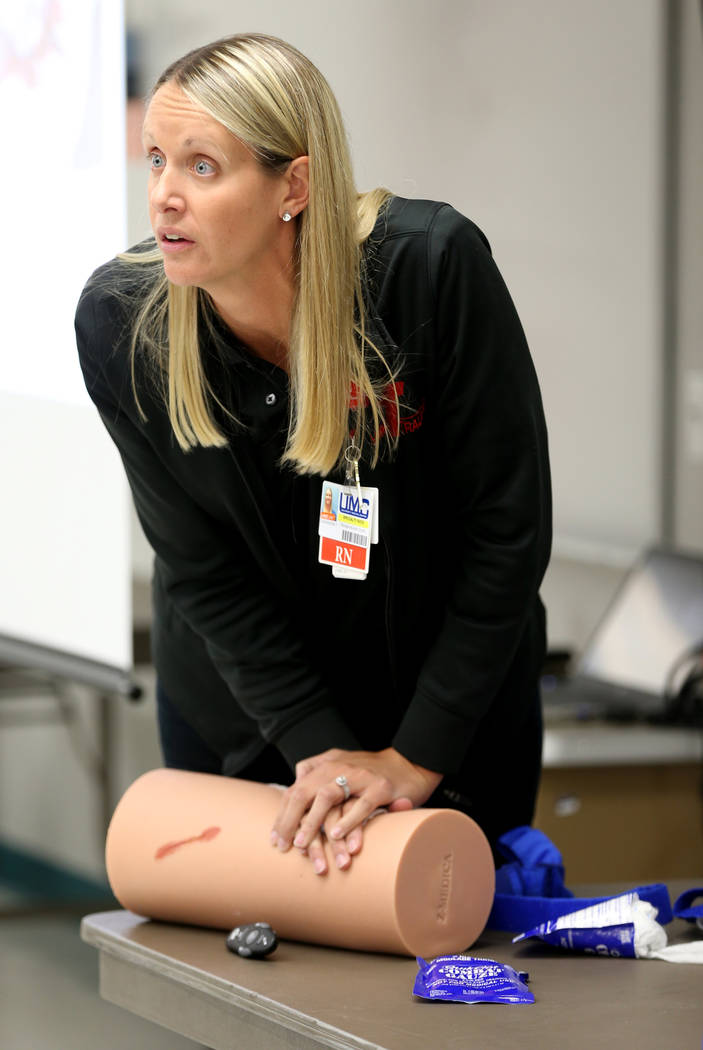 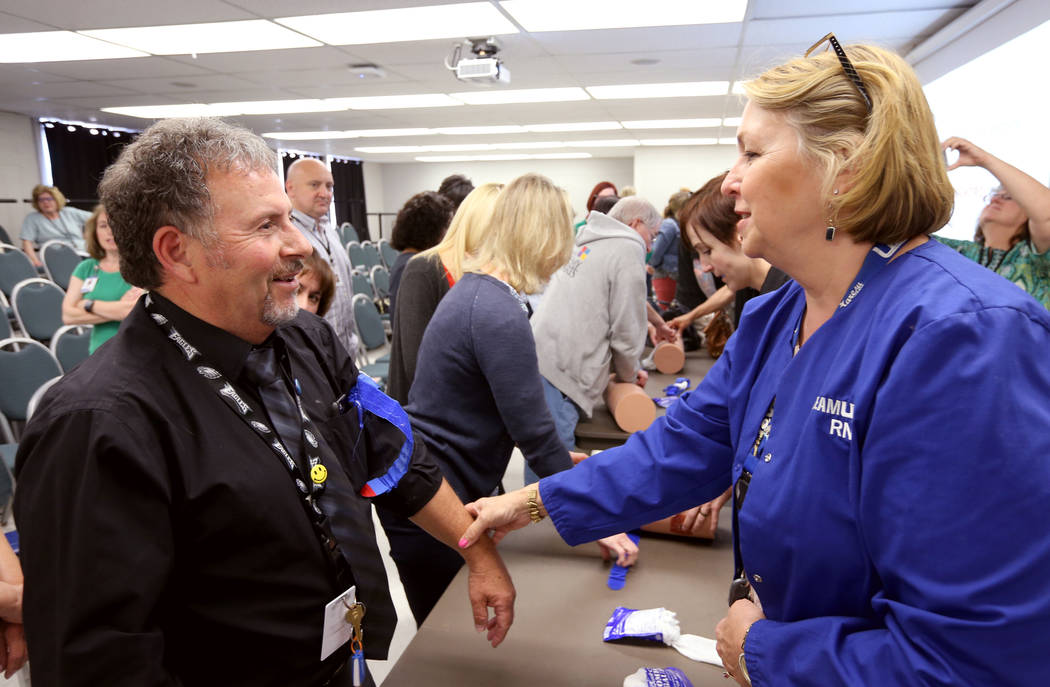 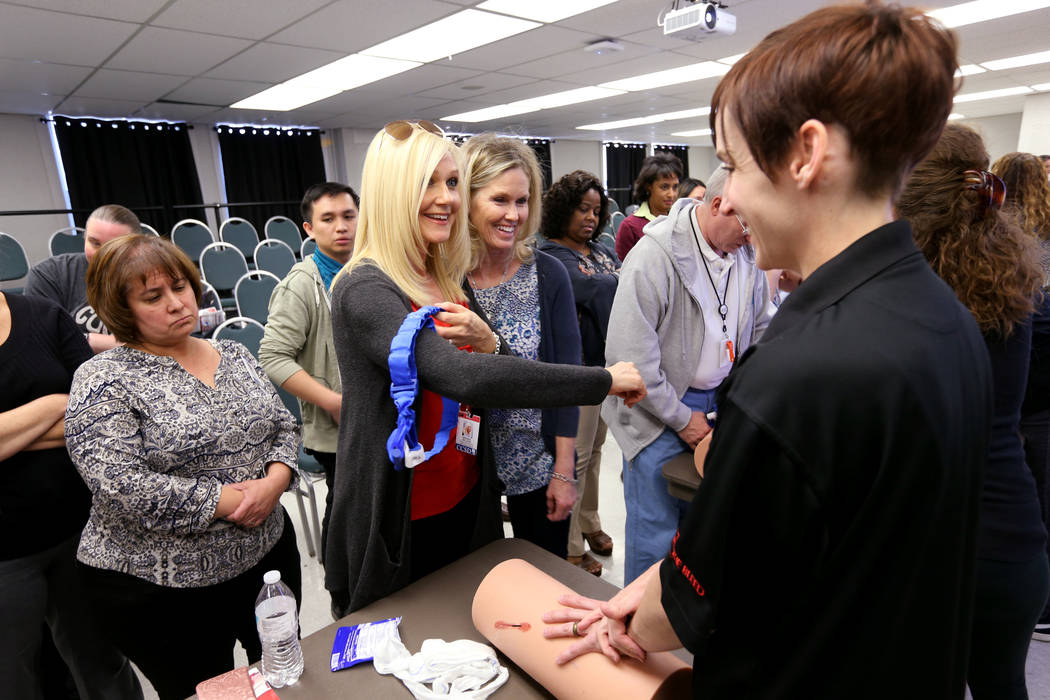 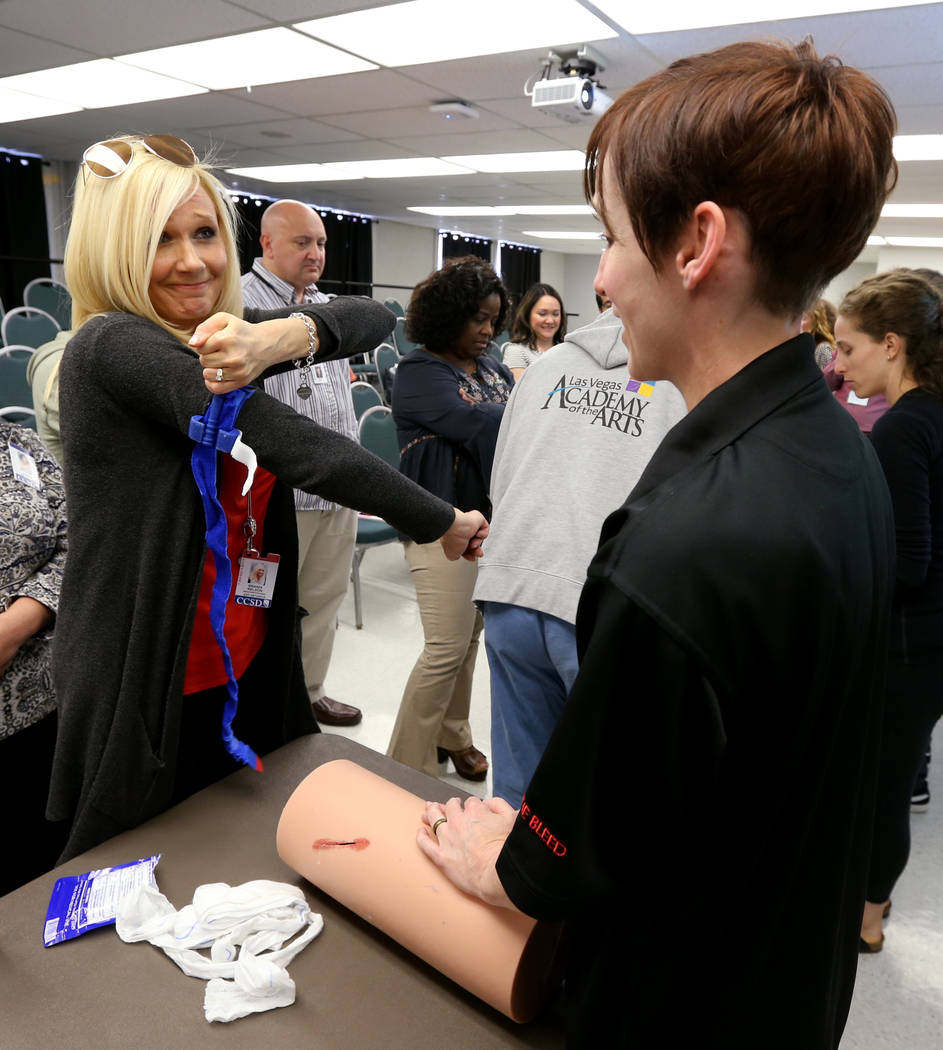 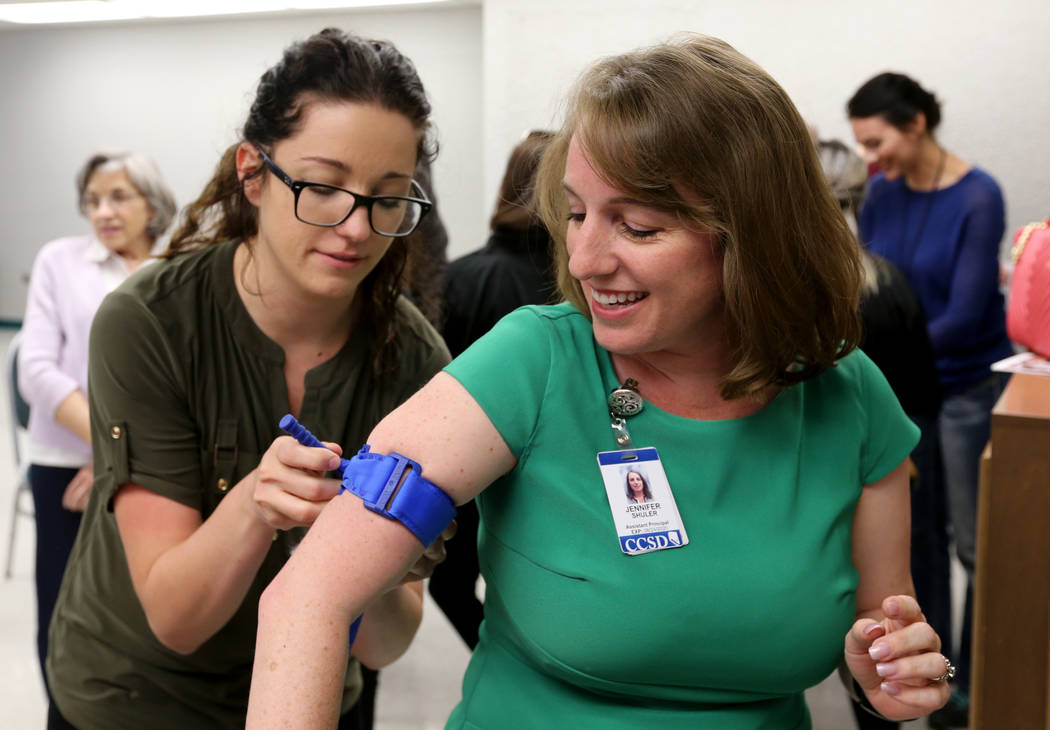 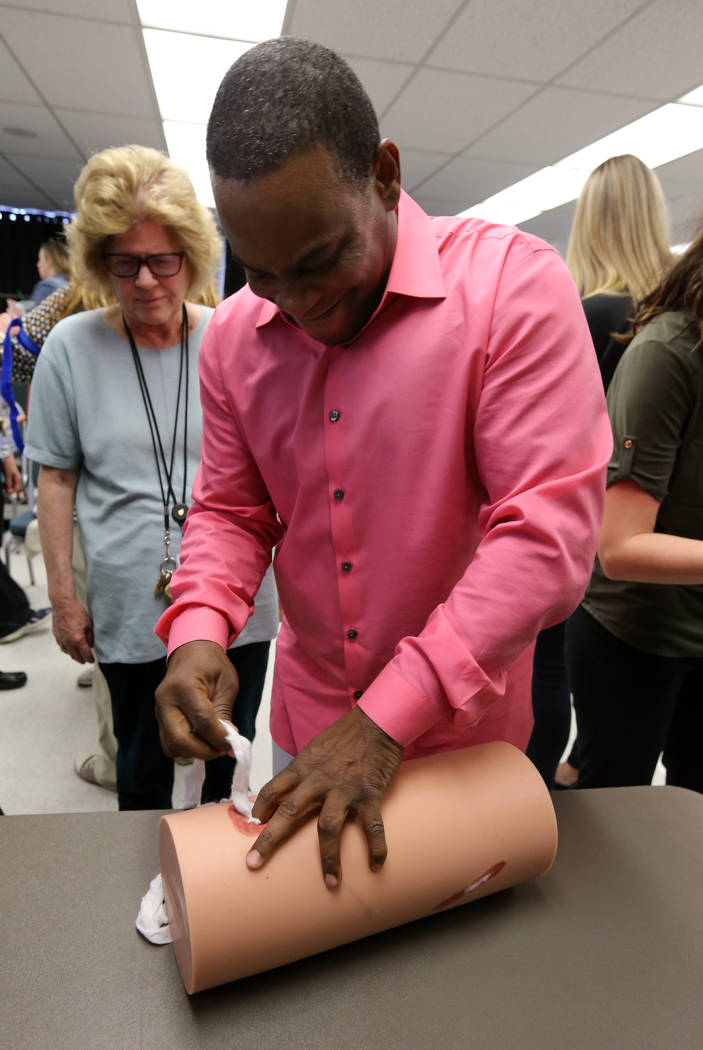 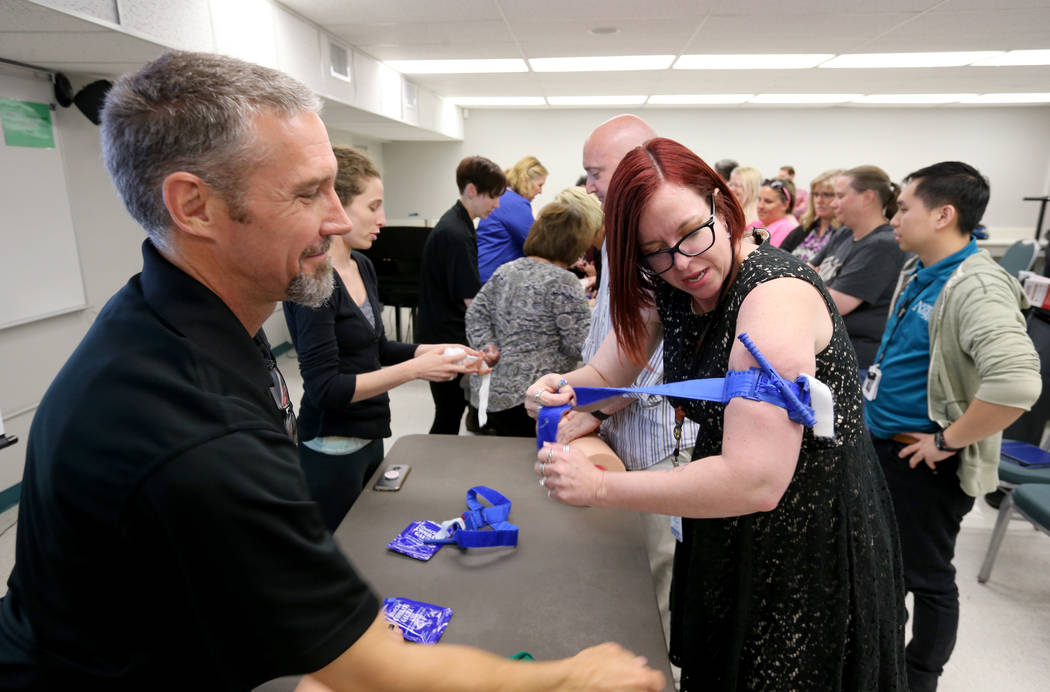 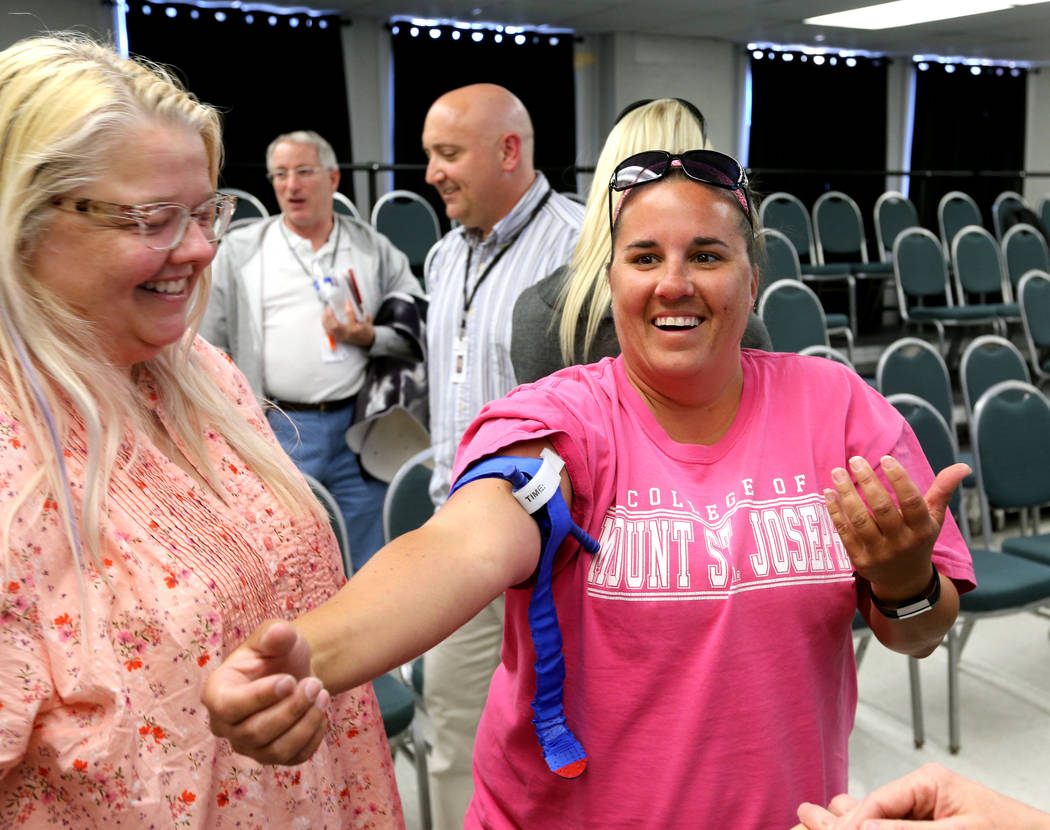 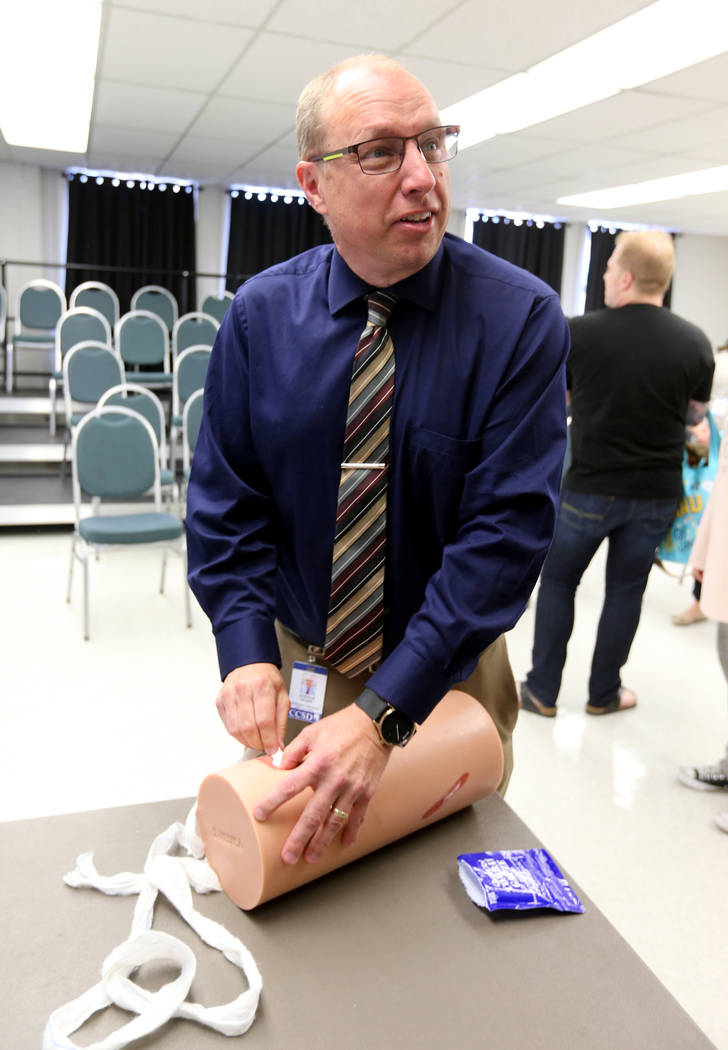 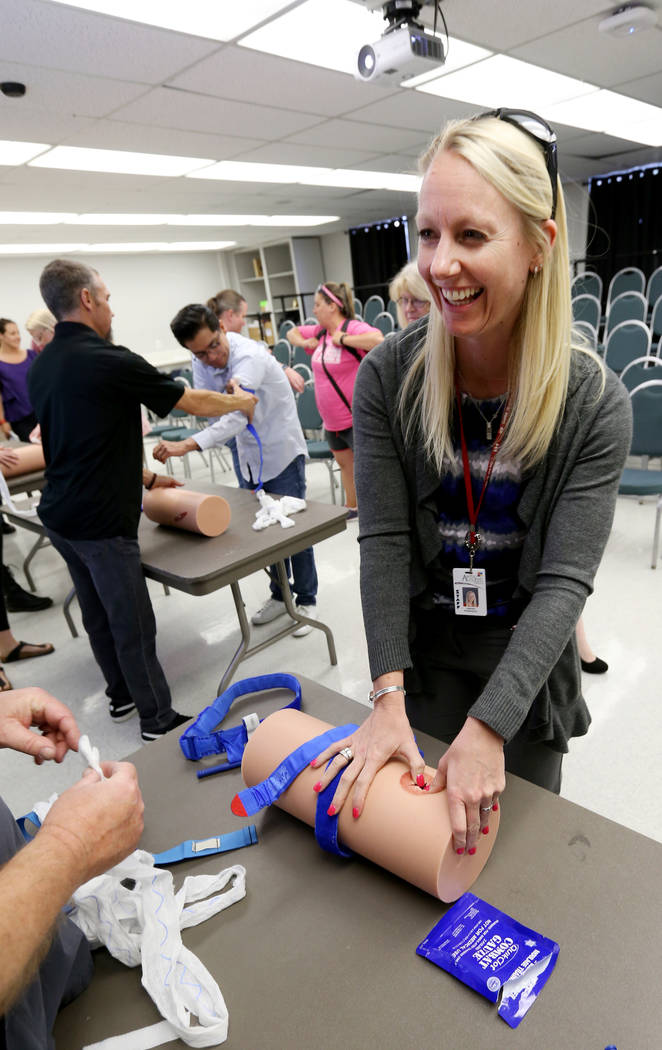 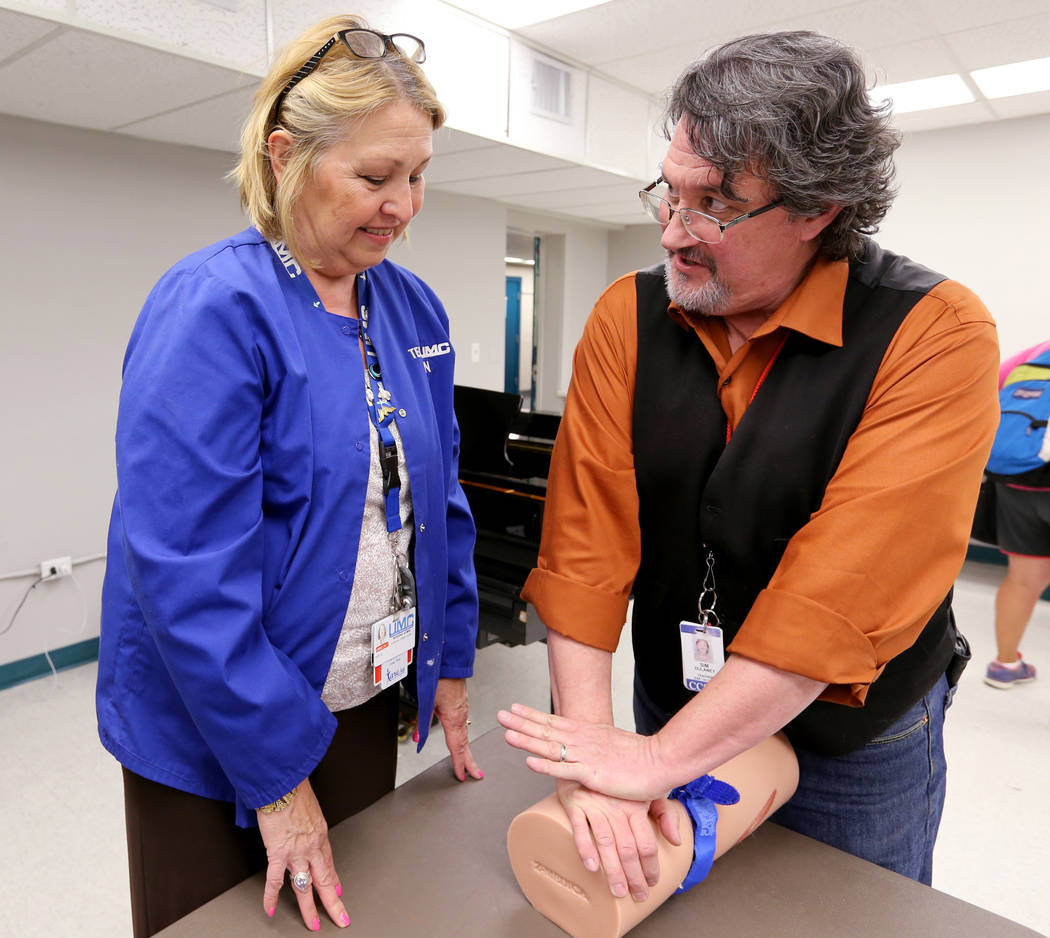 For Lisa Lazenby, it’s only a matter of time.

But when that seemingly inevitable crisis occurs in or near her workplace, the Las Vegas Academy of the Arts in downtown Las Vegas, she will be better prepared.

Lazenby, a teacher for 24 years, and her fellow staff members received training last week on how to stop bleeding in case someone is badly injured and in danger of “bleeding out.” It’s the first time she has received that kind of training, which is becoming more prevalent in schools because of active shooter incidents.

“It’s something very real,” she said. “I think if I was able to help (in an emergency), I’d be more willing now.”

The so-called “Stop the Bleed” training, provided free of charge by University Medical Center of Southern Nevada, teaches trainees how to properly apply pressure, fasten a tourniquet and pack a wound. Since the Oct. 1 shooting, 1,696 teachers at 28 Clark County schools, and all the district’s nurses and athletic trainers, have received the training, which takes about an hour.

“We are here to make you immediate responders,” said Cassandra Trummel, UMC’s trauma outreach and injury prevention program coordinator, at one recent training.

School safety has been a statewide initiative since the Feb. 14 shooting in Parkland, Florida, which left 17 dead. A special task force created by Gov. Brian Sandoval met Thursday for the first time. The group is tasked with providing the governor with recommendations on school safety that Sandoval has said he will build into his draft budget to be considered during the 2019 legislative session.

The bleeding control program was created by the American College of Surgeons and federal partners after the Sandy Hook Elementary School shooting in 2012. There’s been an increase in such training locally since the shooting on October 1.

“Out of tragedy comes good things and this is one of them,” Trummel said.

Training is just the first step for the district, said Roy Anderson, a crisis response officer in the district’s office of emergency management. The district is working with some of its health services vendors to create Stop the Bleed kits, which would include tourniquets, QuikClot packing materials to stuff into a wound, gauze bandages and gloves, among other items.

There are commercially available kits that can be purchased, but they tend to be too costly for public entities operating on limited funds, Trummel said, adding she hopes one day the kits become as common as defibrillators in public spaces.

Some schools have already purchased kits or supplies, including Western High School, Anderson said, but the district is hoping to make them more widely accessible.

After the training, that’s a new priority for LVA principal Scott Walker.

“We really need some of this equipment in every classroom, or strategically placed throughout the school,” he said.

Most of Walker’s staff were trained in CPR, but were new to bleeding control training. Consequently, they peppered Trummel with questions.

Walker, for example, said when he was a Boy Scout in the 1970s, he was taught that applying a tourniquet should be a measure of last resort, since it could lead to amputation.

But those rumors have proven to be unfounded by research, Trummel said, and tourniquets are one of the best measures to help stop bleeding.

“It doesn’t matter if you come in with 10 tourniquets, just stop the bleeding,” she said.

Homemade tourniquets will work in a pinch, but if possible, Trummel said the staff should avoid using thin materials like shoelaces except as a last resort. Belts and thick lanyards usually work well, she noted.

She also reminded staff that unless they have an open wound themselves, the likelihood of contacting a blood-born infection is low. That means they can safely apply pressure directly to an open wound, she said, adding that they should still inform EMTs that they’ve come in contact with blood once the crisis has passed.