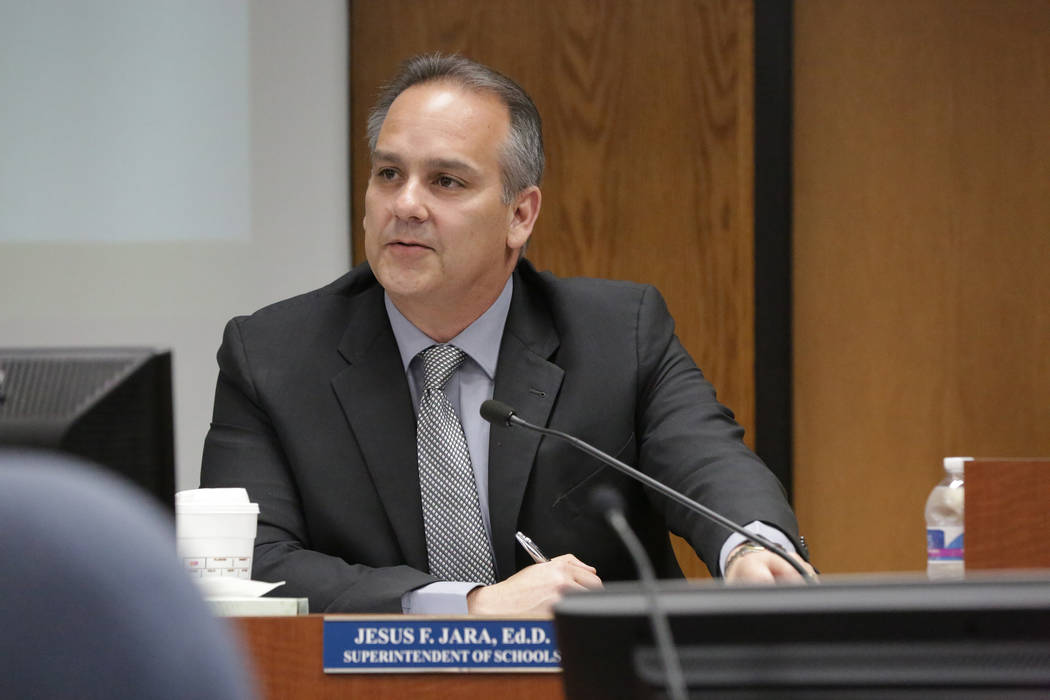 Clark County School District middle and high school students will be subject to random searches for weapons under a new initiative to combat the wave of guns found on campus.

The move announced Friday comes in the wake of 11 firearm confiscations from students this year, compared to just five at the same time last year. It also follows the fatal shooting of a student on the campus of Canyon Springs High School last month.

“I promised this community several weeks ago that I would take action, and this is one step we can take to ensure our students will be more safe tomorrow than they are today,” Superintendent Jesus Jara said in a statement.

School administrators will conduct the searches several times a week with handheld metal detectors, both in classrooms and as students enter school. Searches will begin in the next two weeks after staff are trained.

All middle and high schools will be subject to the new initiative. A computer program will determine which schools and classrooms will be searched to avoid profiling, according to school police.

Students will be subject to further inspection — such as a pat-down — if a basic screening indicates that it’s needed, said Police Chief Jim Ketsaa.

“Only the searcher, a witness and the student will be present for additional screenings to protect student privacy,” Ketsaa said.

Clark County schools are not the first to implement such a program. Los Angeles public schools also conduct daily random metal detector searches at all of its secondary schools. The school district there has a detailed policy on how to properly conduct such a search.

A Clark Count School District regulation states that such searches of a student or their possessions while at school “must be reasonable,” and may only occur if the student voluntarily consents, there is a reasonable suspicion that the student is hiding evidence of wrongdoing or appropriate law authorities conduct the search.

But a Supreme Court ruling in 1985 gave school administrators broad power to conduct searches. The court ruled that they do not need a search warrant or probable cause before searching students.

Instead, they may search a student if they suspect the search will turn up evidence of a violation and if the search is pertinent to the reason staff intervened in the first place.

Though random searches are not based on suspicion, the superintendent said in a statement that the district will publish written procedures in compliance with federal and state law.

Under district regulation, a witness must always be present for all searches and the student must be asked to consent. The individual conducting the search also must be the same gender as the student.

Police will be present to provide assistance and make an arrest if necessary, Ketsaa said.

Staff will be searching for weapons, but appropriate policies and laws will be followed if they find other banned items, according to the district.

“We are very cognizant of the need to balance school safety with the shared belief that every child has basic civil rights and privacy that we must respect,” he said.

The district already has handheld metal detectors and officials estimated that any extra costs associated with the screenings would be less than $2,000.

School officials stressed that the community needs to be involved as well. They urged parents to check their children’s backpacks before they leave for school and to secure any weapons they have at home.

“Get involved in your child’s life,” Ketsaa said, encouraging parents to examine their children’s social media and phones. “Get involved and look and see what’s going on with them.”

The new policy sparked discussion Friday on teacher and parent Facebook groups, with some expressing support and others opposed.

Others expressed concerns about how the searches will be implemented.

Taryn Vaden, a mother of three, told the Review-Journal that she worries the move could exacerbate racial disparities in disciplinary actions that are already quite high — particularly for African-American students.

The searches are likely just the first step to tighten security at its schools.

The district still awaits recommendations from a safety advisory committee that Jara created in September to address the issue of weapons on campus.

A school safety task force appointed by Gov. Brian Sandoval also has adopted security recommendations for consideration in the state’s next budget.