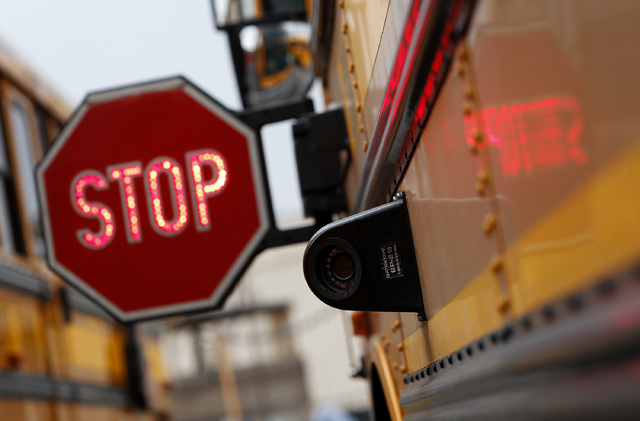 The Clark County School District has requested temporary licenses for new teachers who have the necessary experience or degree but need time to meet other state requirements. The Nevada Department of Education has said no. (John Locher/Las Vegas Review-Journal file)

Only three teachers who were on staff last year will return to Manch Elementary School after summer break ends on Aug. 25.

Thirty-four others must be replaced, something Principal Anthony Nunez learned after taking over the school in May.

“I didn’t know who was leaving or for what reason,” said Nunez, now in charge of a northeast valley school where nine out of 10 students live in poverty and only one-third of fifth-graders are proficient in reading and math. “I came into this, but I tried to focus on the positive.”

His mission: to turn around the struggling Las Vegas school near Craig Road and Nellis Boulevard. Before that can happen, he has to find 34 new teachers to accept the challenge and enact his plans for improvement.

“I spent the entire month of July sending emails, making phone calls,” said Nunez, who had managed by Thursday to fill all but two classrooms with licensed teachers from Michigan, California, Kentucky and beyond.

But Manch is a rare exception among the many high poverty elementary schools in the Clark County School District. Thirty-two other schools are staring down the end of summer short five teachers or more each. The district as a whole is down 650 teachers with just two weeks until school starts, Vesneske said.

Some of these schools have found teachers but can’t hire them. And district officials are blaming the Nevada Department of Education.

The district has requested temporary licenses for new teachers who have the necessary experience or degree but need time to meet other state requirements, as was allowed last school year. No more, the state has said.

Last year, the temporary licenses were issued under a state law allowing emergency relief for the “hiring crunch” created by state lawmakers, according to Dena Durish, director of educator effectiveness for the Nevada Department of Education. The district was in a tough position, having to hire 2,000 new teachers to meet smaller class size requirements and to staff newly created zoom school programs for students learning to speak English.

“The law’s clear that it’s for a unique circumstance,” Durish said Thursday.

But the district isn’t backing down. It has retained a lawyer to make its case to the state education department and claims federal law allows such licenses. Other Western states are granting temporary licenses to teachers until they meet all their licensing requirements, contends Staci Vesneske, the district’s chief human resources officer.

“Because Johnny is jumping off the bridge, do we want to do that too?” said Durish, who’s also an adviser to the state’s Commission on Professional Standards in Education, which sets requirements for teacher licensing. The commission has refused to issue temporary licenses at the advice of the Nevada attorney general’s office. Issuing these licenses may jeopardize more than $90 million in federal funding, according to a report from Deputy Attorney General Carrie Parker.

“We have a disagreement with the state,” Vesneske said on Thursday, the same day that the Clark County School Board unanimously voted to circumvent the policy decision of the state commission and appeal to the Legislature for a bill that would change state law. The bill would create nonrenewable, six-month licenses for newly hired teachers, giving them a window to meet Nevada requirement and take certification tests.

‘Temporary licensing for new teachers is absolutely essential,” said School Board member Linda Young, emphasizing how it would help the district recruit the 2,000 or so teachers it needs each summer.

Durish said Thursday she was not aware of the district’s bill draft request and therefore couldn’t say whether the state education department would support it. The state department would be willing to work with the district on a bill. Its key concern is that students be taught by a “highly qualified” teacher, as federal law requires.

Starting in 2002, the No Child Left Behind Act required that any state receiving Title I money have highly qualified teachers in elementary schools and the core subjects of English, reading, math, science, foreign languages, government, economics, art, history and geography. The act defines “highly qualified” as obtaining full state certification and not having “certification or licensure requirements waived on an emergency, temporary or provisional basis,” as the district has requested.

In response to the 2002 federal requirement, Nevada lawmakers adopted similar statutes and the standards commission prohibited the state superintendent from issuing provisional licenses in core subjects.

Federal law, however, affords “great flexibility” to states in defining state teacher certification requirements, wrote Parker, who’s no longer with the state attorney general’s office. Nevada defines it as meeting “all the requirements for the issuance of a renewable license,” not just some requirements as the district would like to be done for incoming teachers.

But the teachers who’d receive these licenses are usually very qualified, said Vesneske. They just need some time to pass the state test or deal with some technicality related to coming from another state.

Case in point, Dearing Elementary School, which has a 90 percent student poverty rate and received $284,000 in Title I money last school year. New Principal Christy Beaird needed 18 new teachers by summer’s end, replacing about a third of her staff.

“It’s been a challenge,” said Beaird, who thought she’d filled all her teaching positions, finding most of her hires out of state.

But one of those was a female teacher from California. She moved to Las Vegas for the job and was getting ready for the school year when she discovered Nevada wouldn’t accept her California license because it had lapsed.

She had to take the Nevada certification test but couldn’t pass, and Beaird had to let her go.

Beaird could have kept the California teacher as a substitute until she earned her license.

“But that’s risky,” said Beaird, who wants to start the year with all licensed teachers because a substitute may need to be replaced mid-school year if they don’t obtain a state license.

“This is better for us and our children who need stability. I want a guarantee, if I can get it.”