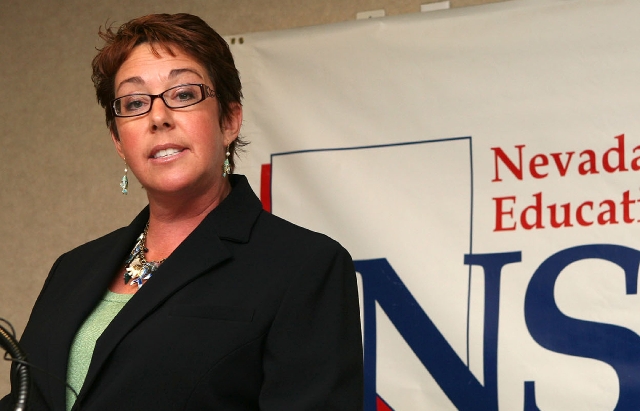 Nevada State Education Association president Lynn Warne, shown in this 2007 file photo, will be replaced in July by Ruben Murillo Jr. Warne has served the maximum six years as president of the teachers union.

The 28,000-member union announced Monday that NSEA delegates, meeting in Las Vegas, had selected Murillo to replace Warne, who was an elementary school teacher in Reno before assuming the union presidency.

As president, her key achievement may have been securing more than 150,000 signatures for the Education Initiative ballot question. Voters will decide in the 2014 general election whether to approve the initiative that would bring a 2 percent business margins tax, a tax that the NSEA estimates will bring in $800 million a year for public education.

The Legislature did not approve the petition by a March 15 deadline, a step that put it before voters. Senate Republicans may try to win support for an alternative ballot question that taxes mining. If they are successful, then the question that receives the most votes, if it surpasses 50 percent, would become law in 2015.

“It has been an honor to represent the voice of educators throughout Nevada for my two terms as NSEA president,” said Warne. “I have confidence in Ruben to assume the NSEA presidency and lead our Association in the campaign to enact the Education Initiative, advocate for Nevada’s students, and provide educators with the tools they need to improve public education.”

Murillo praised Warne and said he intends to build on her record by “continuing to work for improvements and increased funding for K-12 education in Nevada.”