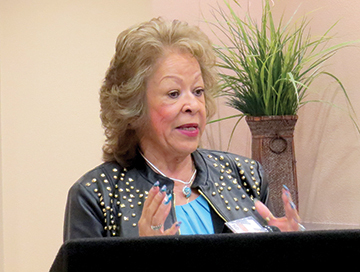 Paychecks kept coming to Priscilla Rocha as she spent every workday at home on suspension, waiting for the results of a Las Vegas police investigation of her Clark County School District department for possible misuse of taxpayer resources.

And she’s still waiting. No charges have been filed or arrests made in the wake of Metro’s joint news conference with school officials in late March on the inquiry into Rocha’s department. Law enforcement did not provide specifics about the suspected wrongdoing.

Rocha’s paid suspension has stopped though. And she ended it, retiring as director of Adult English Language Acquisition Services after 24 years with the district on April 30, according to district records.

“People ask me, ‘Why retire when you’re getting paid to stay at home?’  ” said Rocha on Friday, explaining how the “assigned-to-home” suspension requires that she remain by her home phone during working hours, not even going to the corner store. “I stress out even more staying at home getting paid to do nothing. It doesn’t feel right.”

In the 66-year-old’s condition, stress is something she doesn’t need. She fell ill in 2012 about a year after her husband’s death. Doctors recommended putting her on the liver transplant list and suggested she retire to lessen the strain caused by running the district department that offers classes to non- and limited-English speaking adults.

“I’m concentrating on my health,” said Rocha, something that couldn’t wait for the investigation to end.

She met with her attorney Thursday and again heard no updates about the criminal investigation, which came to her attention in March, almost two months after police started watching her department. The morning of March 19, she and four staff members were suspended, but not before Rocha was questioned by police for five hours. Officers raided her offices of all files and interviewed staff, also searching a private residence and a private business.

Not much has changed since then. Department Coordinator Esther Vargas remains on paid suspension and three others — itinerant tester Isabel Soto, administrative secretary Renee Romero and office specialist Fernando Larios — remain on unpaid suspension, according to district spokeswoman Melinda Malone.

Las Vegas police, who have been tight-lipped about the suspected misuse of taxpayer resources, told the Review-Journal on Friday that any updates will come from the School District. But Malone said Friday there’s nothing to report about the investigation.

“People say no news is good news. I’d rather have this over,” said Rocha, who believes she’s been targeted and eventually plans to hold a news conference to tell her side of the story. “This is coming from the top level of the district.”