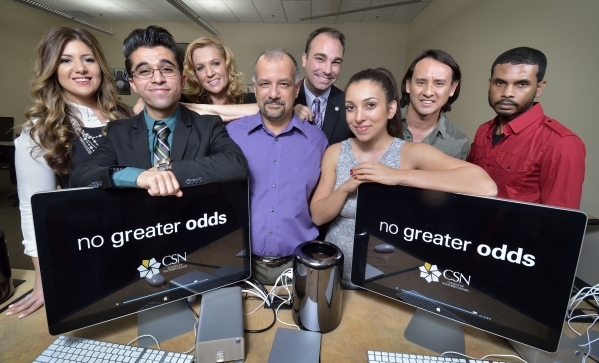 Monique Makhlouf’s first stint as a student at the University of Nevada, Las Vegas was an intimidating experience fraught with challenges.

After graduating Chaparral High School in 2004, she took a job as a cocktail waitress at the Stratosphere to help her recently disabled mother pay the family’s bills. Her uncle was dying of cancer, adding to Makhlouf’s mounting distractions from school. Graduation felt increasingly out of reach, and she failed most of her classes before dropping out three semesters later.

It would take Makhlouf eight years to overcome those obstacles, but in 2012 she finally obtained a bachelor’s degree that set her on a career path as a hospitality instructor at UNLV. Today, she credits much of her success to the College of Southern Nevada, where many of the region’s nontraditional college students go for a second start.

“I’m not the only person that’s struggled and worked,” Makhlouf said. “Everyone can do it.”

Makhlouf believes strongly in the role of community colleges, a message she touts in a new film produced by CSN faculty and students that chronicles the lives of five alumni and the challenges faced by nontraditional college students. Their tales are varied and complex — while Makhlouf talks about her struggles to support her mother, another student with bipolar disorder explains why college is so daunting for someone with a mental illness. One other recent graduate in the film describes what it’s like to obtain a GED and attend college 20 years after dropping out of high school.

Dubbed “No Greater Odds,” the hourlong film aims to convey the importance of college attainability for students across all socioeconomic groups. CSN officials first aired the movie publicly at an education conference in Las Vegas last month, and they plan to continue showing it at similar events nationwide.

“These stories have to get out,” said James McCoy, who spearheaded the effort and serves as CSN’s associate vice president of academic affairs. “I had tears coming down my eyes the first time I heard them.”

From the students featured in the film, to the director and crew, everyone involved is a current student, graduate or staff member of CSN. The film cost the school $40,000 and took seven months to make — McCoy said a professional film company initially gave CSN an estimate of $250,000 for a film of its scope and length.

While “No Greater Odds” was made primarily for educators, project leaders have put in bids to showcase the movie at high-profile cinema events such as the Sundance Film Festival, hoping that it’ll further spread its message about college accessibility and bring national recognition to the CSN faculty and students who assembled it.

“People who needed the experience got to work on these projects and elevate their skill set,” said John Aliano, a media technologies professor at CSN who produced the film. “It was really a blessing to have this opportunity.”