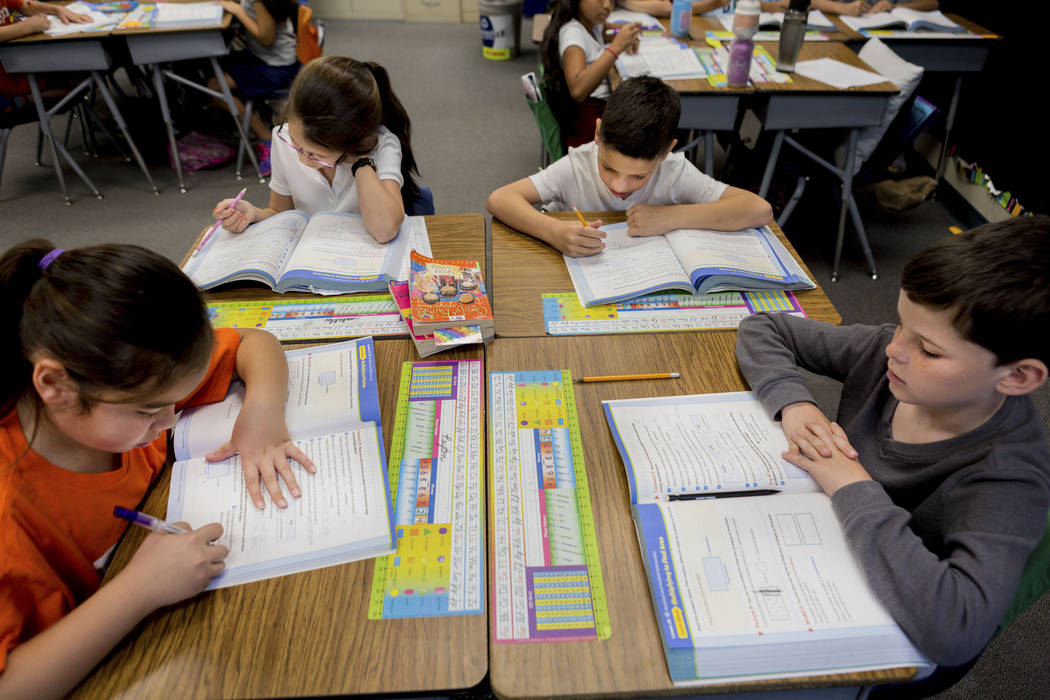 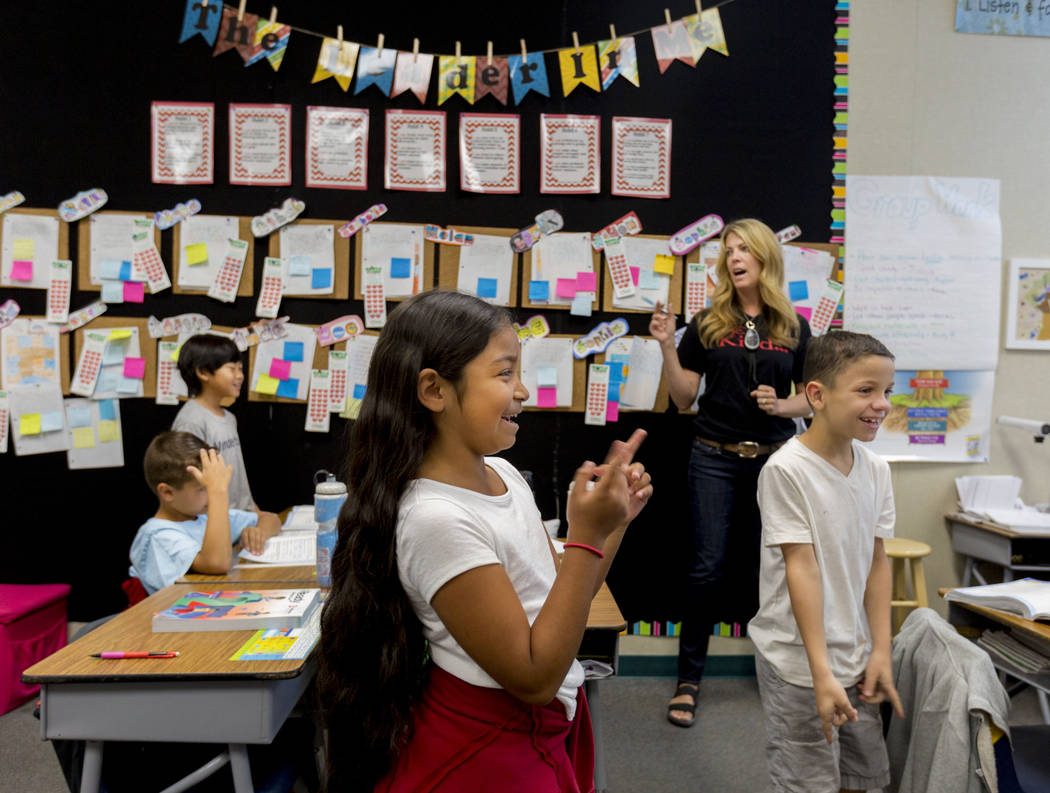 The Henderson school — operating at roughly 158 percent capacity — does not let any space go to waste.

Dividers transform larger classrooms into two smaller ones. Physical education features four first-grade classes at once. Six portable classrooms are on campus. The school is one of 15 on a year-round schedule to alleviate crowding.

And during testing season, one librarian and science teacher are kicked out of their rooms to make desk space available.

“It takes a lot of planning on their part to be able to teach off of a cart for a month and a half,” Assistant Principal Ronda Reedom said.

It’s a harsh reality for many schools across the Clark County School District — a majority of which are operating at over 100 percent of capacity, according to a district report for 2016-17 released in October. 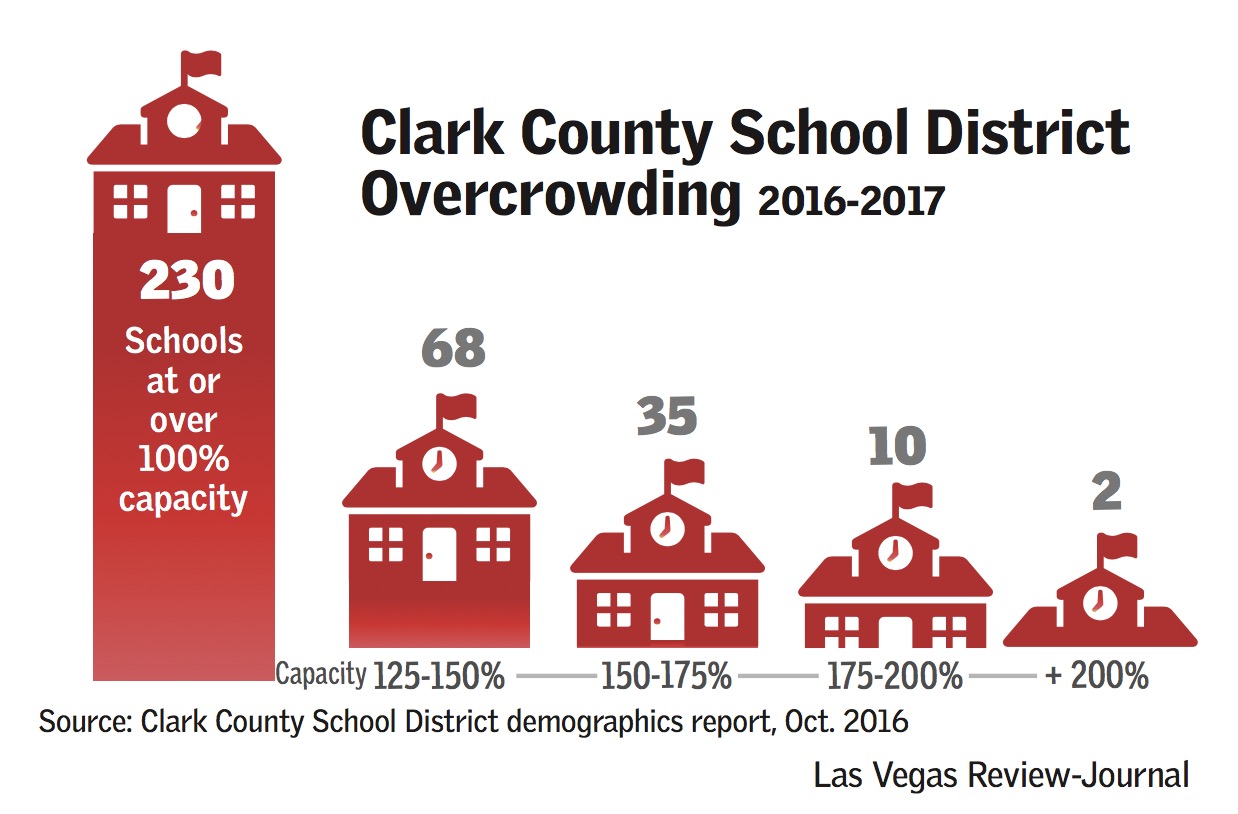 Growing class sizes have been the result of both a budding population — particularly in the high-growth area of Henderson — and multimillion-dollar budget shortfalls.

That translates to a tight squeeze for teachers and students.

“I think (my son) has suffered, I’m sure he has,” said Rebecca Colbert, a Beatty Elementary parent who said her fifth-grade son is in a class of 39 students. “I know the teacher has. She’s been doing double work.”

The district has moved toward solving the problem. A 10-year, $4 billion Capital Improvement Program will add 12 new schools; six are slated to open in the fall, one in January and four more in 2018.

Another school, expected to relieve Vanderburg’s crowding, has been delayed until 2019.

But even with 25 schools receiving structural additions, the solutions aren’t enough to eliminate the problem completely.

“It’s a plan,” said Rick Baldwin, demographics director for the district. “We’re still working on the development of a plan, but we’re trying to achieve all these goals. Some areas, some schools are going to be easier than others.”

The capital program — made possible through a 2015 vote by the state legislature to extend a bond rollover program — has helped. Yet the district estimates its full capital need at roughly double that amount, or $8.3 billion.

The district already receives money through the state’s Class Size Reduction program, which strives to achieve certain student-teacher ratios. The program received $306.3 million for this biennium.

Clark County schools received roughly $109 million of those funds for this fiscal year, according to Hanson.

But without an immediate, fully funded, long-term solution, schools are still operating at student-teacher ratios that are higher than the state’s limits.

Schools that exceed those ratios must request a variance from the state, according to Nate Hanson, director of district support services for Nevada’s Department of Education.

In Clark County, 169 of 217 elementary schools had a variance as of the second quarter, according to state data.

Parents, too, have grown annoyed by bursting class sizes. Parents at Beatty Elementary — where overcrowding will not be immediately alleviated by the seven new schools opening next school year — took their concerns to the school board in October.

“I think there’s still a lot of class disruption, there’s a lot of trying to reconfigure so that people can see the board and not be on top of each other copying work,” said Colbert, one of the concerned parents.

To Colbert, overcrowding is the same issue with the same bad solution.

“We keep waiting on the legislature to fund differently, to fund equitably,” she said. “I don’t think we’re headed in that direction.”

The graphic attached to a previous version of this story included an incorrect source date.