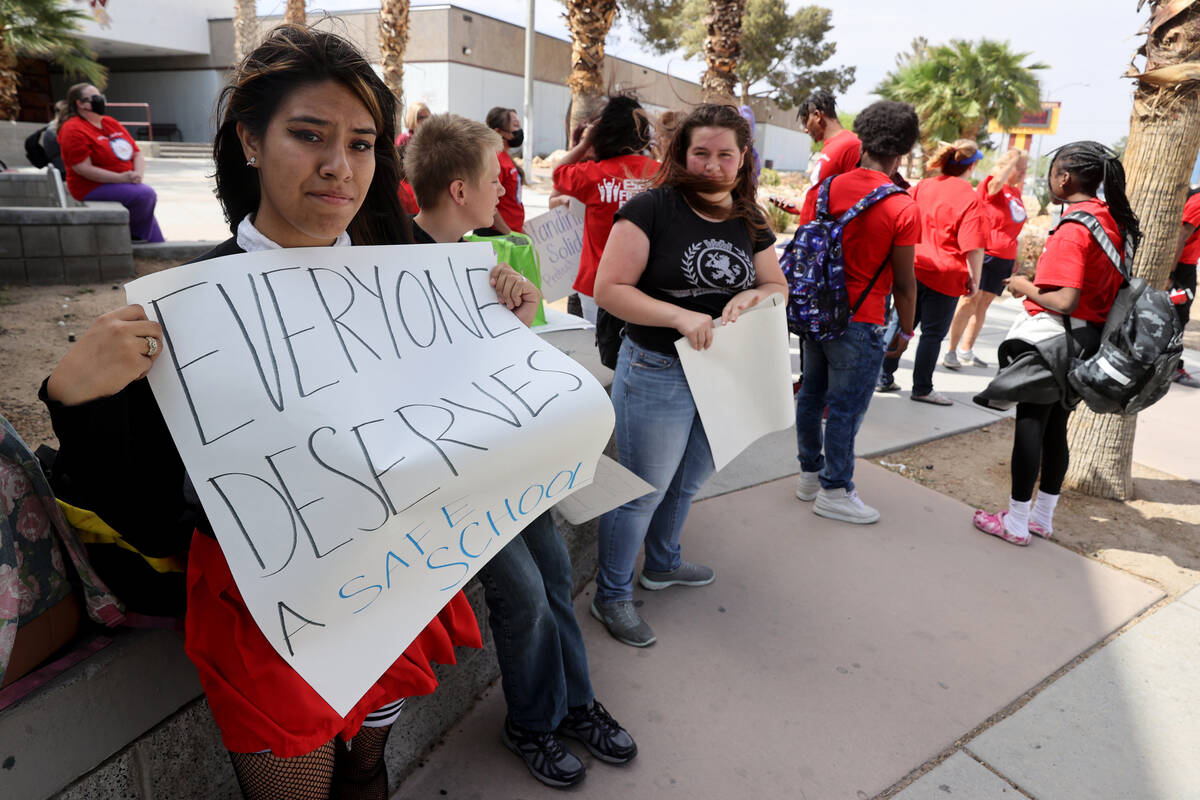 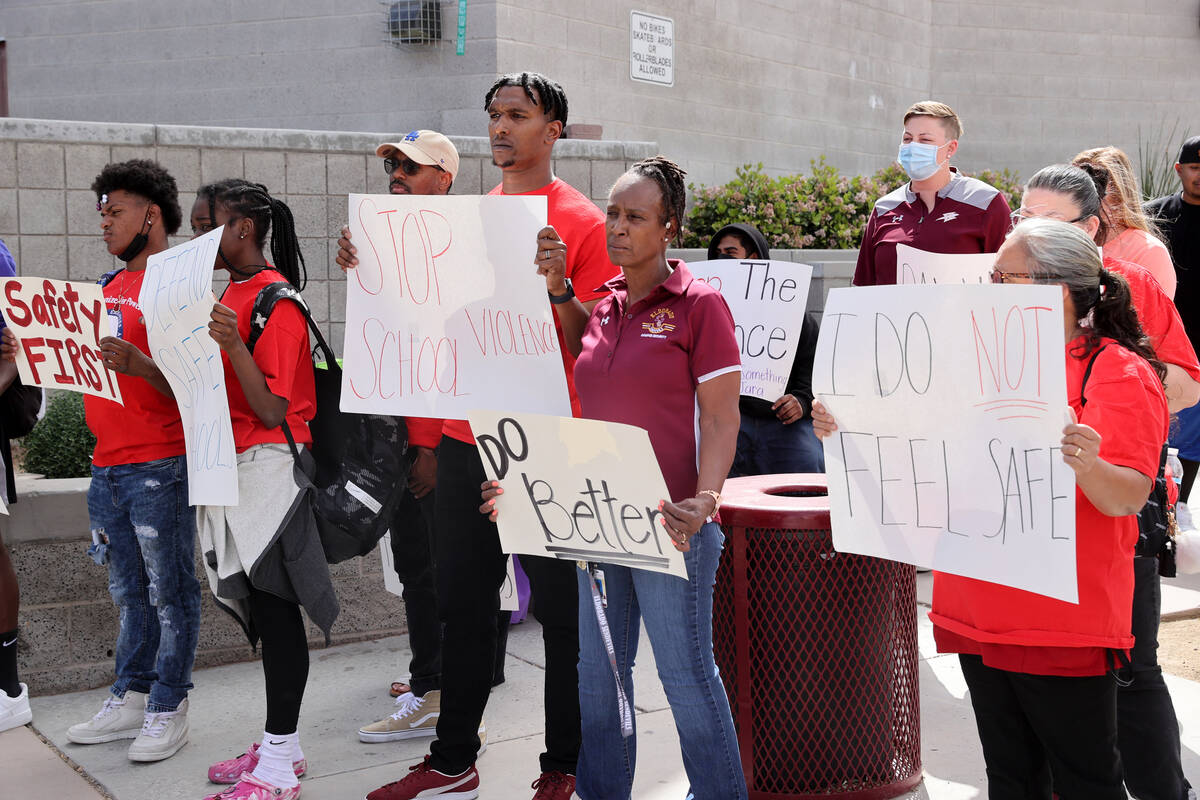 Eldorado High School students, teachers, parents and support staff protest outside the Las Vegas school Tuesday, April 19, 2022. It was the first day of classes following the violent assault of a teacher on the school campus earlier this month. (K.M. Cannon/Las Vegas Review-Journal) @KMCannonPhoto 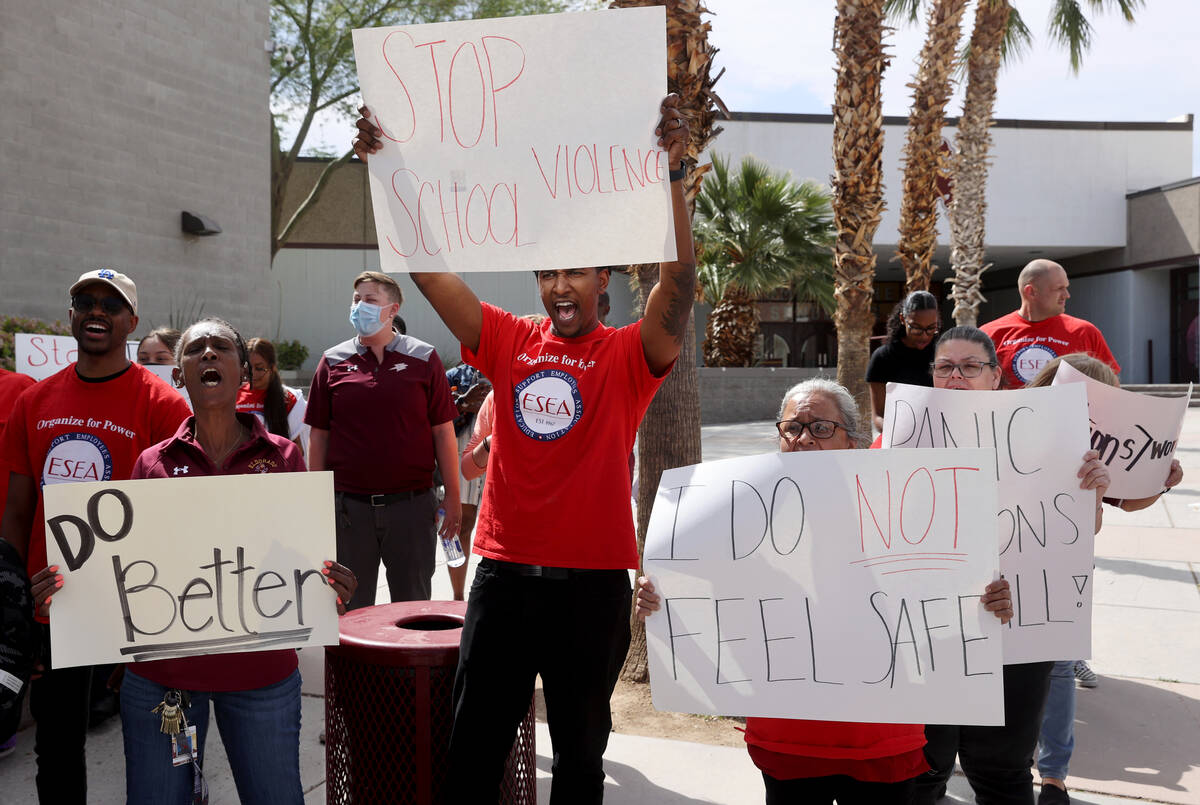 Anthony Boone left his casino job 9½ years ago to work for the Clark County School District. It was a choice he made to support his wife and spend more time with his children as they were going through high school, and it’s one he doesn’t regret.

But Boone makes less money now working as a campus security monitor than he did when he quit working for the casino in 2013. If he had stayed, he estimates he would likely be making close to $30 an hour, compared with the $17.75 he now makes working for the district.

“I just hope the district recognizes our position and what we bring to the table,” he said. “The pay is definitely outdated.”

Campus security monitors patrol schools and monitor students to report fights or other suspicious activities to administrators. The job can also require them to approach people who are entering school grounds without permission or diffuse threatening confrontations between students.

It’s a position that Shelley Seeberg, an organizer with the Education Support Employees Association, describes as the frontline security for any school campus.

Now, ESEA, the union that represents school employees such as cafeteria workers and bus drivers, is asking the district to prioritize how campus security monitors are paid to address recruitment and retention issues for the positions.

In the wake of the pandemic, when students conducted remote schooling for a full year, campus security monitors saw an increase in the number of fights, weapons or mental health incidents that they’ve had to confront on district campuses, according to Seeberg.

A spike of violence at district schools last year prompted the district to implement emergency security upgrades including an instant alert system for staff, new fencing, upgraded cameras and increased police presence at several high schools. School police Lt. Bryan Zink called the violence the most he had seen in his nearly 20 years with the district.

It was the same year that caused Boone to burn out in his role as a campus security monitor at Legacy High School, ultimately prompting him to move to Jesse D. Scott Elementary School.

But while the district has told the union that movement has been made in terms of implementing security upgrades at schools, Seeberg said the union hasn’t seen that same urgency applied to personnel.

A third of campus security monitors make less than $15 an hour, which comes out to an average salary of roughly $21,000 a year given their nine-month employment contract, according to Seeberg.

As a result, many campus security monitors must work multiple jobs and the district has a “terrible” problem retaining them. Seeberg said the district currently has roughly 80 positions that they’ve been unable to fill.

“That leaves campuses really in harm’s way in terms of security,” she said.

“Student safety and well-being is our top priority so learning can occur,” Jara wrote.

Seeberg said she wanted to impress upon the community the importance of campus security monitors, many of whom have stayed in these positions because of their commitment to students.

“We need to figure out a way to make this a career so that our people can stay and not have to leave,” she said.

For Boone, the union’s ask of the district is long overdue for a position that he calls the backbone of the school when things go wrong or if things get tough.

“If we’re not here, a lot of stuff can go unnoticed and unforeseen,” he said. “Just don’t take our position for granted at the end of the day.”