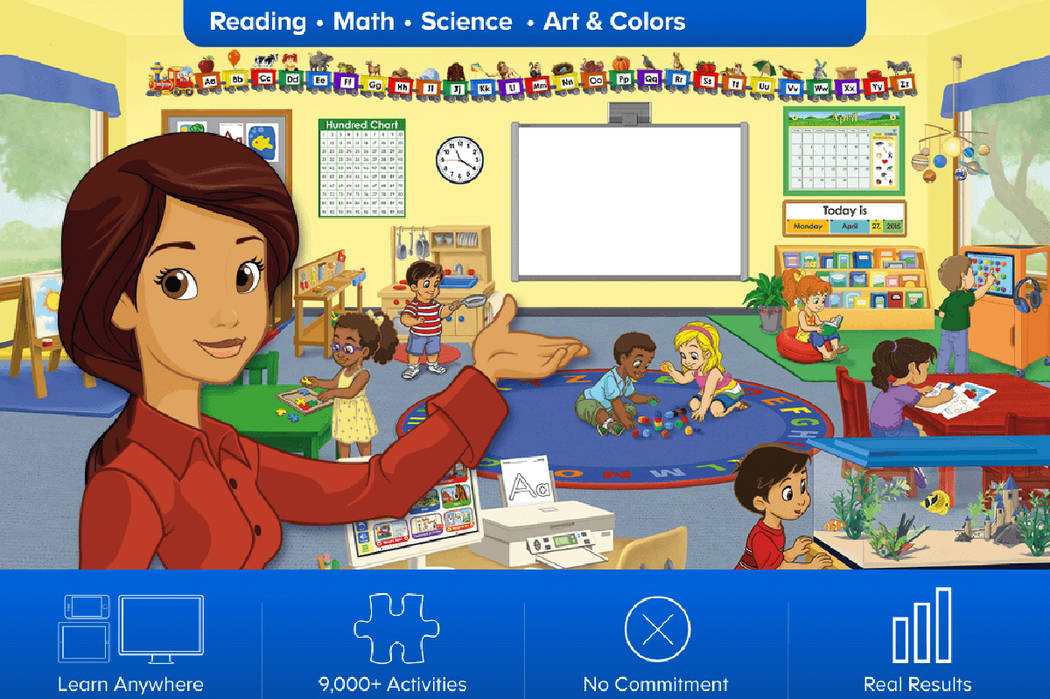 With a persistent early learning shortage in Nevada, some families are turning to online alternatives to prepare their kids for kindergarten — a goal that research shows makes an impact on reading scores and achievement rates in elementary school and beyond.

But critics question whether these programs can narrow the education gap between well-to-do urban residents and low-income families and rural residents who often have no access to quality brick-and-mortar preschools.

Sunil Gunderia, chief strategy officer for Age of Learning, the company behind the popular education app ABCmouse, said last week that the early-learning tech products are not intended to replicate the complete preschool experience.

“We’re not a substitute for social interaction and play, and we don’t want to be,” he said in an address on Thursday. “But we think we can solve a lot of problems and make progress for kids on the path to kindergarten readiness.”

During CES, Gunderia discusssed ABCmouse’s findings in the world of online learning, where game-based play and terminology like “boss levels” impart lessons on math, science and reading while children think they’re just playing.

In addition to low cost, one of the other advantages of online programs is the ability to personalize the lesson for each child, Gunderia said. Children can repeat a lesson until they master it, which would not be possible in a traditional education program.

The ABCmouse platform also provides a dashboard where parents can see their child’s strengths and weaknesses. A future update will incorporate artificial intelligence to predict whether struggling to solve a problem is a “productive struggle,” or whether intervention is needed, Gunderia said.

The goal is to democratize access to early education for all children, according to Gunderia, who added that the shortage in the state of high-quality early learning programs are not likely to improve overnight.

While Nevada has made moves to address its preschool shortage since 2013 — when a Guinn Center report found that the state had the fewest children enrolled in the nation — the Nevada Institute for Children’s Research and Policy at UNLV has found that the state only meets about 30 percent of the need.

For kids under 3, the options may be limited, and for families in rural communities, there may be no option at all, according to Amanda Haboush-Deloye, the institute’s director.

Some parents of preschool-aged children will opt to keep them home, or ask relatives to care for them, but a recent survey found that 50 percent of parents of kindergartners would have been interested in a preschool were it available, she said.

Online-based programs may offer more choices to families for whom a preschool may be several hours away, Haboush-Deloye said. She added that a quality online program would engage parents, too, with suggestions for offline activities that would tie into the curriculum and help develop kids’ socio-emotional skills.

Drawbacks to the programs include the oft-documented doctors’ warnings against too much screen time for young children, Haboush-Deloye said, which has been linked to sleep and behavior problems.

She also noted that for working families, neither online programs nor traditional five-hour preschool days will solve the challenges of finding safe and affordable child care for a full workday.

Subsidies are available for low-income families, but those on the cusp may find themselves signing over much of their paycheck to a child care facility and choose to leave the workforce instead.

“We put these programs out there and they don’t fill up, and we wonder why,” Haboush-Deloye said. “Well, they don’t address the specific needs of these families.”

Beyond one specific policy, she said she wants to see funding for more choices, so that communities and families can decide what would best serve their needs.

One tech outfit already working in Clark County to give preschoolers a running start on their education is Waterford UPSTART, a Utah-based nonprofit. Its learning software, meant to be used for 20 minutes per day, five days per week, offers free computers and internet access for families who can’t afford one or both.

Executive director and co-founder Claudia Miner said the nonprofit was drawn to Clark County as a kind of proving ground for the curriculum’s impact on English language learner students. Of the 424 Nevada students currently using UPSTART’s software, just under half are English learners, and 60 percent come from families making less than $39,000.

Nevada itself has a number of other challenges that Waterford would like to study, Miner said, ranging from the transportation challenges in the rural counties to the effects of shift workers’ night-side schedules on their children’s learning.

Like other learning apps, UPSTART features personalization, but Miner says it’s the dedicated coach assigned to each family, coupled with offline tie-in activities, that makes the software less an online preschool and more a kindergarten readiness program.

“If your kids are ready to learn and there’s some that are not, that’s a detriment to them because the teacher will be busy with the ones who aren’t,” Miner said.

The UPSTART program is funded for two pilot years in Nevada, after which Miner says she hopes to win support from the Clark County Commission. A presentation by the company estimated the cost of rolling out the program to rural and home-schooled children at $1,000 per child and in county-operated centers at $250 per child.

The pilot program has resulted in children scoring in the 80th percentile in three out of four defined reading skills. Usage of the app also exceeded the recommended 75 minutes per week for all nine weeks of the program, according to a presentation prepared by Waterford.

“We can provide that for kids when others can’t, or for one reason or another, won’t,” Miner said. “We’re not here to replace anything.”