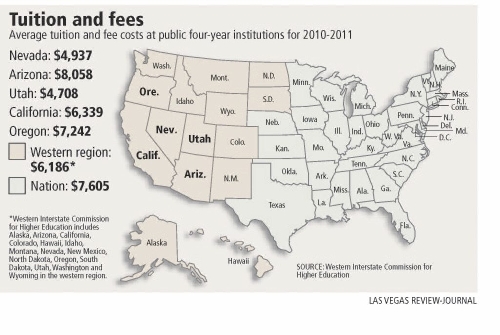 Depending on how it’s measured, what it’s measured against, what you call a cut and who’s doing the talking, the state higher education system’s budget would be cut by somewhere between 7 percent and 42 percent under Gov. Brian Sandoval’s budget plan, presented Monday.

But no matter the percent, the hard fact is this: The system will have nearly $400 million less over the next two years than it did in the previous two years if Sandoval’s plan is adopted.

Sandoval’s budget proposes a $214 million cut in state funding of the higher education system, though he said the system could make up some of that with tuition increases. That will be combined with the loss of $185 million in federal stimulus money the system received in fiscal year 2010.

The governor presented a balanced budget, as he is constitutionally obliged to do, with no tax increases, as he had promised to do.

He called the higher ed cuts a 7 percent cut, or a 17.6 percent cut if you count the missing stimulus money. The system is funded by a combination of state general funds, federal research grants and contracts, private gifts and endowment income, and money made on auxiliary enterprises, such as sports stadiums and hospitals.

Sandoval is, in fact, proposing a 22 percent cut in state support — 13 percent of the overall budget for higher education — compared to the last budget cycle. Measured against the overall budget, the loss of the state money and the federal stimulus money would be a 25 percent cut. Sandoval’s budget, measured against the last legislatively approved budget before the cuts began three years ago, is 42 percent lower.

So, the size of the cut depends on how it is measured.

“There’s a lot of confusion about what the cut is,” said David Rapoport, the student body president at the University of Nevada, Las Vegas.

Sandoval noted that the higher education system is in a unique position in that it can raise its own money, independent of the governor or the Legislature, through tuition and fee increases. He asked that 15 percent of any tuition increases be set aside for financial aid.

The system’s governing Board of Regents recently approved a new policy that will allow the universities to charge higher tuition for what are considered high-cost, high-demand programs. At UNLV, beginning next year, students in nursing, architecture and physical therapy will begin paying twice what they used to pay under the new plan.

But higher ed leaders said it would be impossible, not just difficult, to raise $400 million through tuition and fee increases.

The system’s entire tuition and fee income in the 2009-2011 biennium is projected to be $418 million. To raise that by $400 million, the size of the overall cuts, tuition and fees would have to be nearly doubled without losing any students.

The reality is, though, that if fees were raised that much, the colleges and universities would lose students. And, if more departments and programs were eliminated at the universities, they would lose even more students.

“How is it an attractive proposition for students to stay in Las Vegas” if tuition were substantially raised? Rapoport said. “It would lead to a permanent brain drain. Students would leave Las Vegas and never come back.”

Students from all three Southern Nevada schools are planning a rally this weekend outside the Grant Sawyer Building in Las Vegas, where legislators will have a town hall meeting on the state budget.

“Students aren’t going to take a back seat on this one,” Rapoport said.

James Dean Leavitt, chairman of the Board of Regents, acknowledged that tuition and fee increases are probable. He said, however, that he did not think the system could sustain increases beyond bringing the rates up to the regional average.

Tuition and fees already have risen 75 percent in Nevada the past five years.

The same is true elsewhere. Nationally, according to a report by the Delta Cost Project, it is becoming more common for public universities to rely more heavily on tuition than on tax money.

In the last round of budget cuts, several departments at both universities were eliminated, which led to layoffs. Pay and benefits have been cut and positions have been frozen.

“The fear is that this will mean that everything we’ve experienced to this point, the deep cuts that we’ve experienced, will actually be only the beginning,” said Gregory Brown, a UNLV history professor and president of the university’s chapter of the Nevada Faculty Alliance.

The larger worry is that fewer people go to and finish college in Nevada, which is already last in educational attainment.

“You’re basically wiping out an entire generation of college students,” he said.