Liz Groesbeck is following her one true love — the brain — to medical school. But she’s open to developing a new relationship.

“I don’t have much experience with things that aren’t brains,” said Groesbeck, who graduated in May from the University of Nevada, Reno, with a master’s degree in neuroscience. “But I might fall in love with another organ system.”

Groesbeck, 24, of Henderson, is one of 60 students who will be part of the first class at UNLV’s new medical school. Like her classmates, she was selected both for academic excellence and the fact that she has close ties to Nevada.

But they are equally proud of its diversity: 20 percent of the first class are Latino and 8 percent are African-American — both groups considered underrepresented in the field of medicine.

“It’s an incredible class of diversity,” said Maureen Schafer, the medical school’s chief of staff. “There weren’t special accommodations given for anyone. These kids performed.”

“I’m so pleased and so excited,” Atkinson said. “They’re a really outstanding group. It was really hard picking them.”

Lauren Hollifield, 25, of Las Vegas, said UNLV’s reputation for having a diverse undergraduate class motivated her to apply to be part of the inaugural medical class.

“To be surrounded by other people who are diverse, not only in ethnicity, but religion, viewpoints, everything — I was excited to apply because of that,” said Hollifield, who is African-American.

She also said she hopes to work with underserved populations after graduation, a desire fueled by a medical internship in Nicaragua.

“There are parts of Las Vegas that aren’t getting the health care they need right now,” she said.

According to Schafer, the school employed a blind admissions process, where a number was assigned to each of the 909 applications that administrators received. After winnowing the list, they zeroed in on students who are Nevada residents or those with close ties to the state.

“Our strategy is to educate and train students who will become future Nevada doctors,” she said. “If a future trained physician feels embedded in our community, and they want to stay and practice here, we’ve accomplished our goal.”

According to the 2015 State Physician Workforce Data Book by the Association of American Medical Colleges, Nevada ranks No. 47 in the number of active physicians per 100,000 population, with only Wyoming, Idaho and Mississippi trailing behind in the bottom three.

Groesbeck, whose father Robert Groesbeck served as mayor of Henderson from 1993 to 1997, said her father’s strong ties to Henderson influenced her loyalty to Southern Nevada.

Sarah Grimley, who is originally from Kenosha, Wisconsin, but is currently living in Las Vegas with her grandparents, said she thinks it’s “incredibly important” to stay in Nevada so she can help address the state’s physician shortage.

“I love it out here,” she said. “It’s an amazing place full of amazing people.”

However, Grimley is also keeping an eye on 2021, and the possibility that she might need to live and practice where her residency program is.

“There’s no question — we need to expand our residency opportunities,” Schafer said of Nevada. “It’s a conversation we need to have with physicians. We need to listen to our current partners. We need to understand what their ideas are.”

William Fang of Las Vegas — a graduate of Johns Hopkins University, who spent two years in the Teach for America program — turned down offers from two other medical schools to attend UNLV. Schafer said another student chose UNLV over Duke University.

“Johns Hopkins is a fully developed hospital system,” Fang said. “It’s world-renowned. There, what I see, is a developed community where health is prevalent.”

Fang, however, said he was inspired to choose UNLV to provide a solution for his mother, who also lives in Las Vegas and suffers from an unknown autoimmune disorder.

“I wanted to stay close to her to promote a health care system that she can rely on in her time of need,” he said. “There’s so much potential, so much optimism here. It’s about jumping in to see what you can grow, create and change — that’s what I’m all about.”

Others accepted to multiple schools might have been swayed to come to UNLV because of the full-ride scholarship given to each student in the initial class.

“Of course that played a role,” said Monica Arebalos, a first-generation college student and a 2016 graduate of UNR. “But in a way that makes you more motivated. It makes you want to make those donors proud and see where their money went.”

Arebalos said she is already is facing $40,000 in undergraduate student loans.

“For private donors to invest their own money into future physicians and us is humbling,” she said. “It’s incredible.”

Although bolstered with their full-ride scholarships, the students are entering into a double dose of uncharted territory. Medical school is not only a new venture for them, but it’s a new undertaking for UNLV, which earned preliminary accreditation just eight months ago.

Most students interviewed by the Las Vegas Review-Journal said they were concerned whether a UNLV degree would be seen as second-rate, but said those worries largely evaporated after early interactions with the school’s leaders.

Hollifield called it a “calculated risk.”

“That was a big concern for me,” she said. “But after seeing all the faculty and their past experiences with other medical schools that are accredited, it makes me think that UNLV will be successful.”

Schafer said administrators will be looking for constant feedback from the students.

“You have to constantly ask the customer, ‘What did you think? How did we do?’ And the students are our customers,” she said.

The charter class seems up for the challenge.

Arebalos, for example, is in the process of establishing a UNLV chapter of Phi Delta Epsilon, a medical fraternity.

“The administration has always portrayed to us that we’ll have the power, and that we’ll be actively making the decisions,” she said. “Our opinions will matter, our voices will matter.” 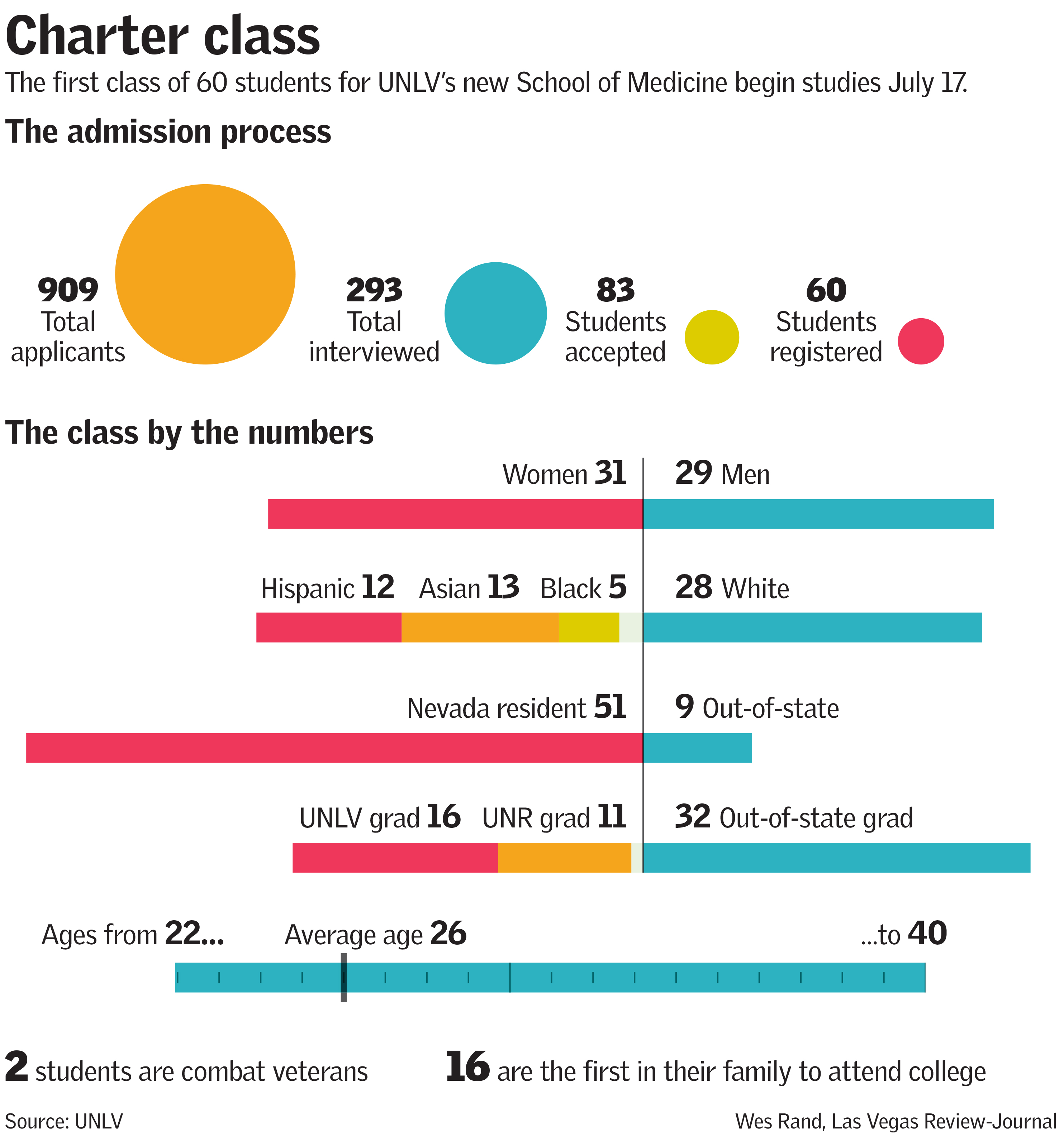