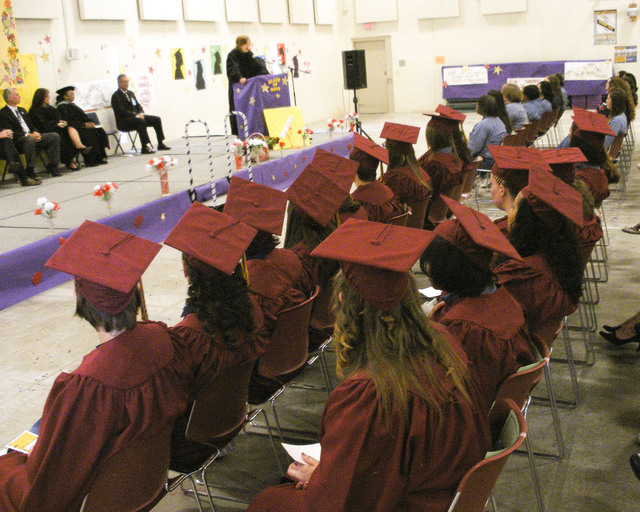 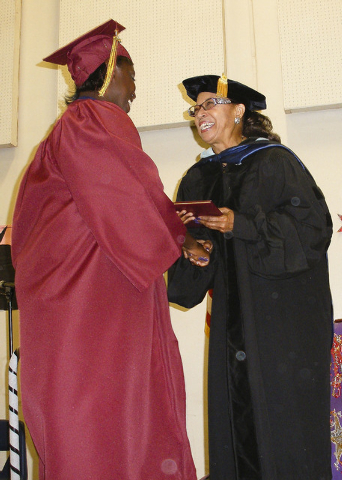 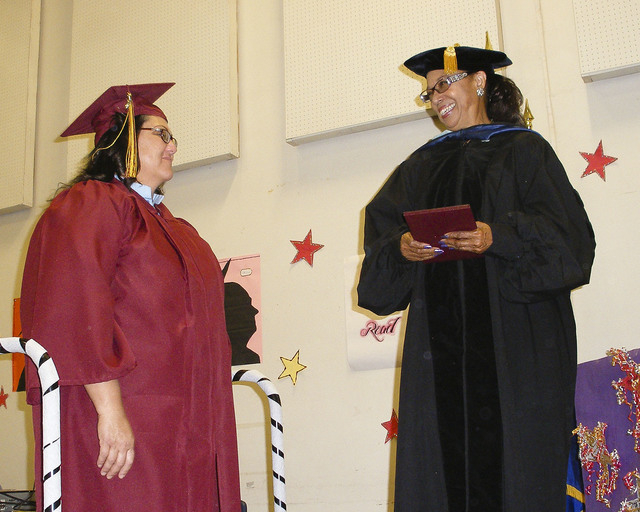 A crowd builds outside the barred entryway, eager for a high school graduation that is five, 10, even 20 years overdue.

“I never thought my daughter would graduate, ever,” says Debi Dearman, who can’t keep the excitement to herself and starts talking to the 40-year-old sister of another graduate as they sign in, consenting to searches and leaving behind all but a car key. No other items or phones allowed.

Inside the gymnasium, maroon gowns wrap the successful students. Rows of chairs cover the cold, concrete floor and an inspirational message hangs behind the stage, just like any other commencement ceremony. “The dreams of the future are brighter than the history of the past.”

The students’ blue uniforms poke out from beneath the gowns. All their shoes are white.

Officers stand at the back of the room.

Window slits give glimpses of high fences and razor wire just outside.

Tuesday, she and 74 others became more than inmates of the Florence McClure Women’s Correctional Center in North Las Vegas. They, at last, finished high school or a vocational program.

“It makes me feel like I’m worth something,” says Taylor, whose been incarcerated since May 2011 for a dozen counts of home invasion, burglary and grand larceny. She dropped out of Las Vegas’ Del Sol High School two months before graduation although she just needed to pass the math proficiency exam. She fell into the wrong crowd, she says.

A high school diploma will help put Taylor on the path to a college degree and a career in physical therapy when she’s released, not fall back into habits, she says. “I won’t go back to my old ways.”

Prison is like high school, Warden Jo Gentry says. The question is the same when you finish.

“What are you going to do when you get out?” she says.

A lot of research shows the more educated an exiting prisoner, the less likely they are to return, correctional center Deputy Director Brian Connett says.

The School District’s prison schools are graduating 115 students this year with full-fledged high school diplomas, meeting the same requirements as any Nevada high school student, including passage of the state’s four High School Proficiency Exams. Area prisons will be handing out just as many certificates of high school equivalency and certificates for vocational studies.

“We can agree that being inside these walls is damaging, emotionally and spiritually,” valedictorian Simone Taylor tells her classmates, and pauses. “If we allow it to be.”

Growing up, she remembers being told education is important. Knowledge is power.

Inmates could invite approved visitors for Tuesday’s ceremony. Marsey Boyd drove through the night from Los Angeles for her sister. Dearman flew in from Reno and cried at the ceremony for her 25-year-old daughter, Erika Dearman, sentenced on drug charges. Some inmates didn’t request any visitors and were allowed to being fellow inmates, who sat in their blues opposite the visitors.

Christina Jarrett, 43, has never allowed her three children to visit her here. She doesn’t want their single mom, sentenced for embezzlement, seen in prison.

Tuesday’s ceremony may lack the fanfare of the School District’s nearly 50 other traditional graduations held in venues like the Thomas & Mack Center and Orleans Arena. It still had an impact outside the razor wire and reinforced walls. At least it did for Jarrett’s family, even though they weren’t there to see it.

“I haven’t seen my kids in 10 months. I can’t wait,” says Jarrett, who plans to become a fitness instructor.

Marsey Boyd’s sister, Sarah Boyd, can’t put her diploma to use for at least five years, when she’s up for parole on the second-degree murder of an 11-month-old boy left in her care. School has given her “something to look forward to, confidence,” says Marsey Boyd, who hopes her sister can pursue an associate’s degree in prison. If not, a high school diploma will be a good start.

“When she stands in front of the parole board, she can stand tall, believe what she claims.”