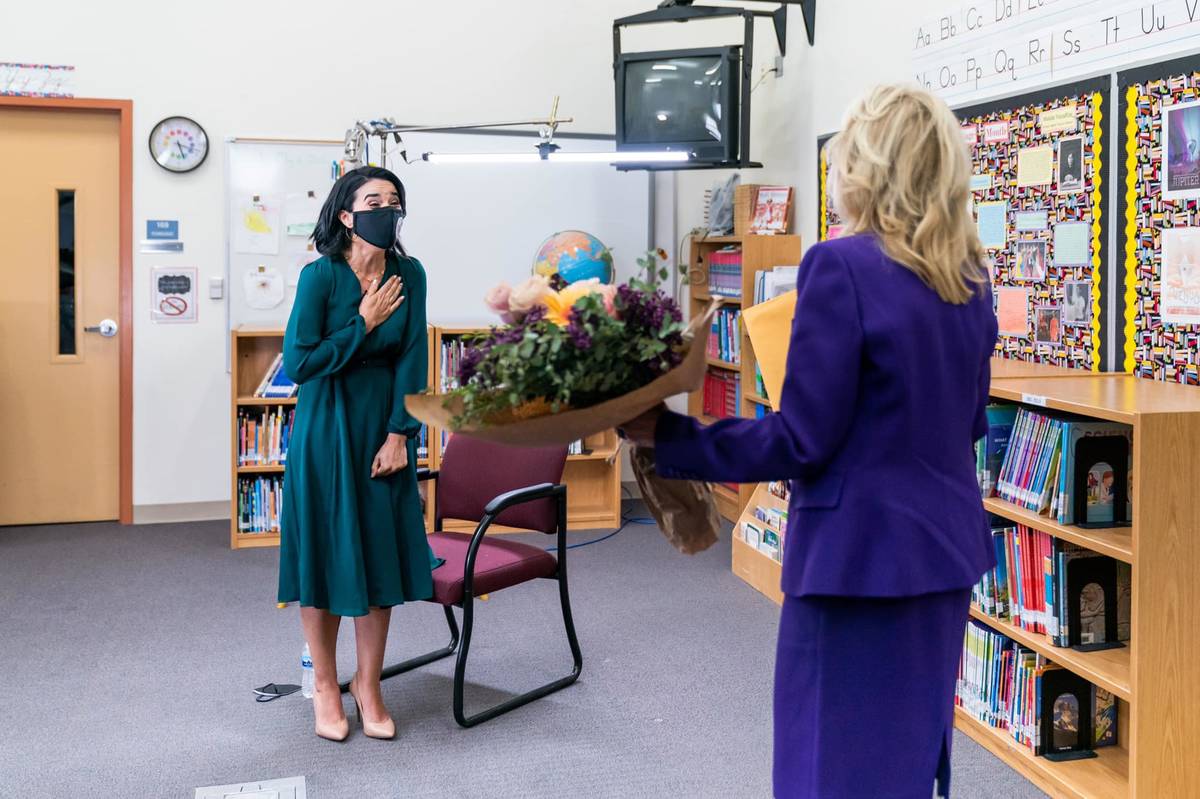 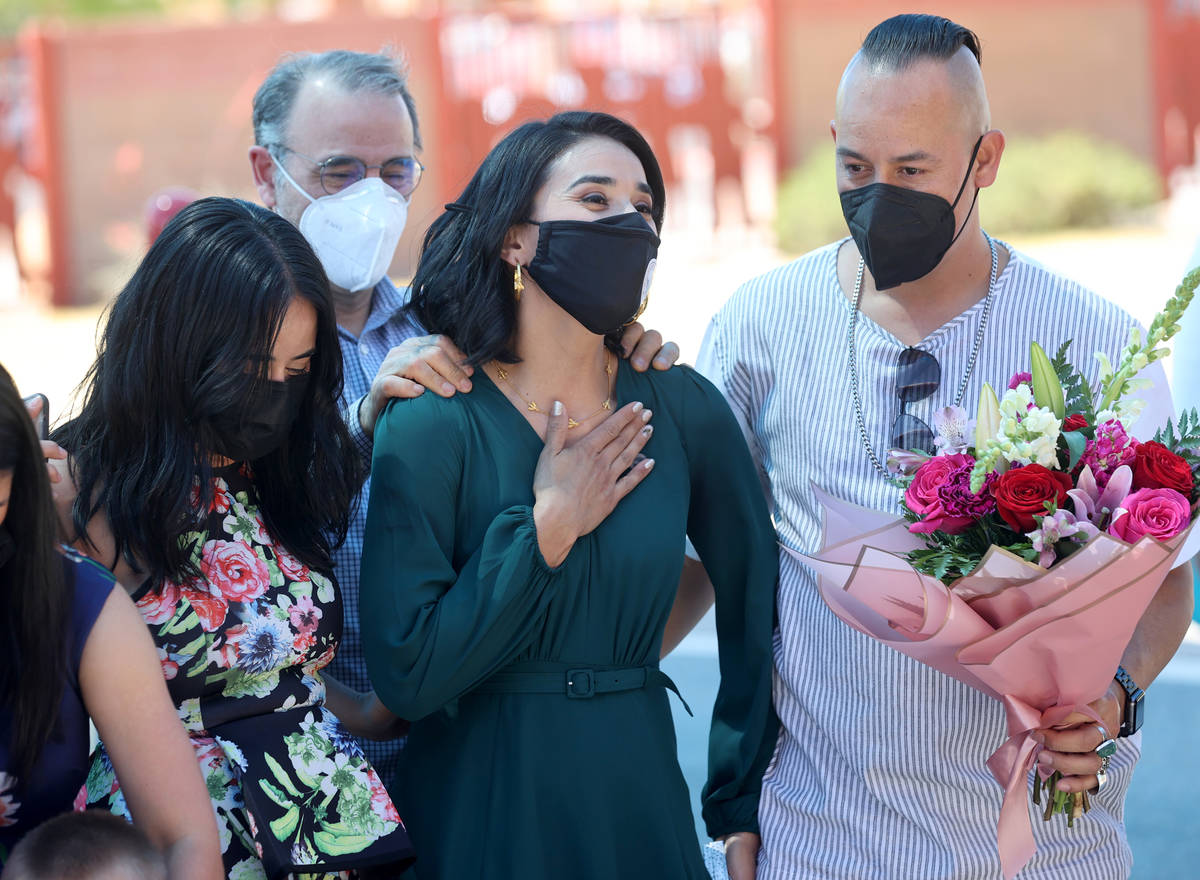 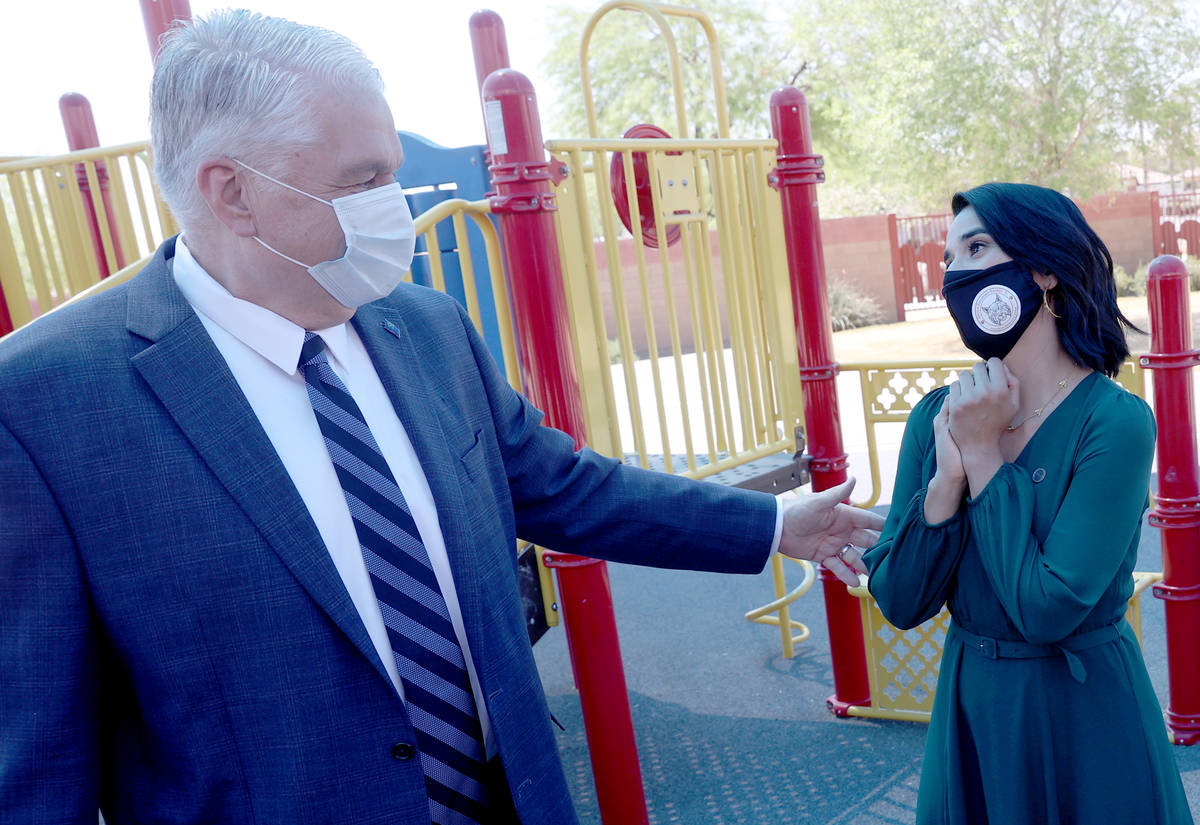 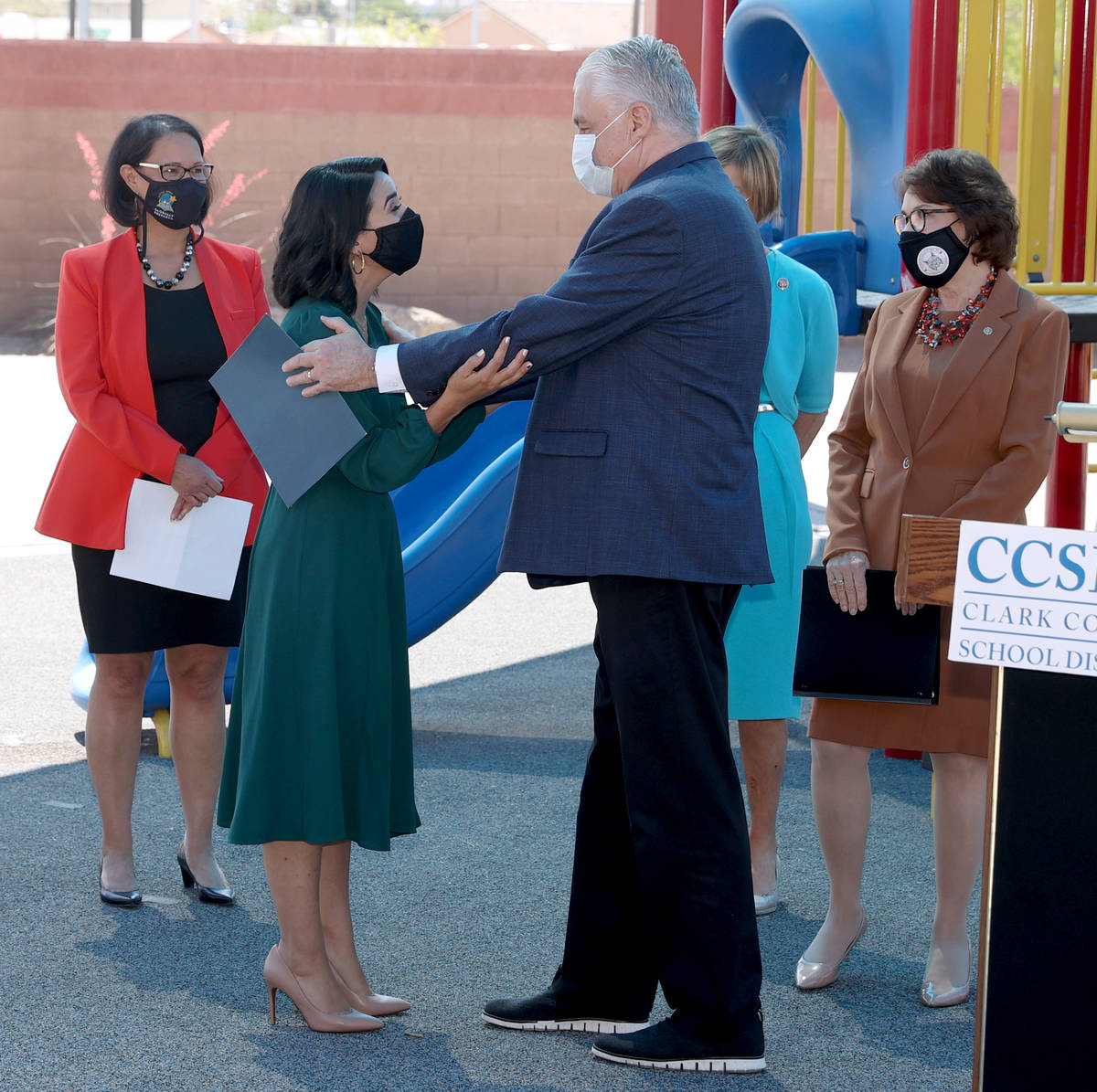 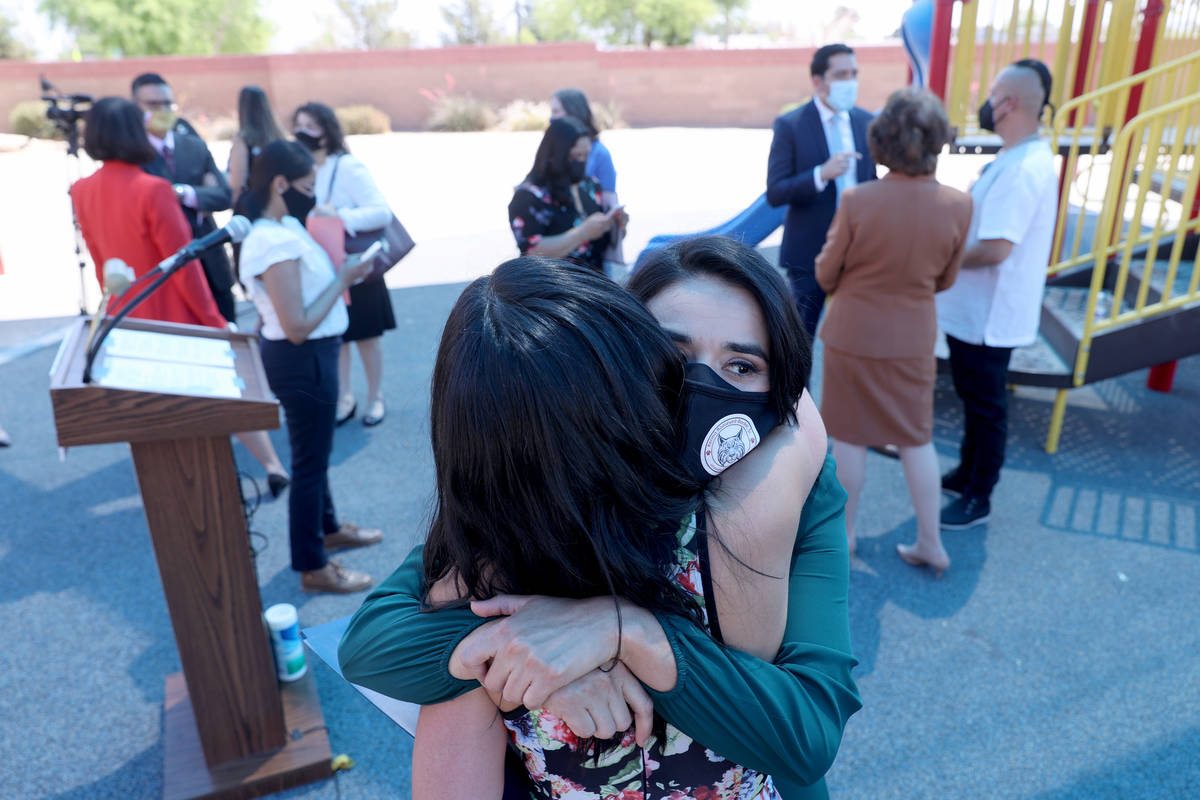 Booker Elementary School special education teacher and learning strategist, Juliana Urtubey, right, is gets a hug from her sister Natalia Urtubey after being named 2021 National Teacher of the Year Thursday, May 6, 2021. (K.M. Cannon/Las Vegas Review-Journal) @KMCannonPhoto 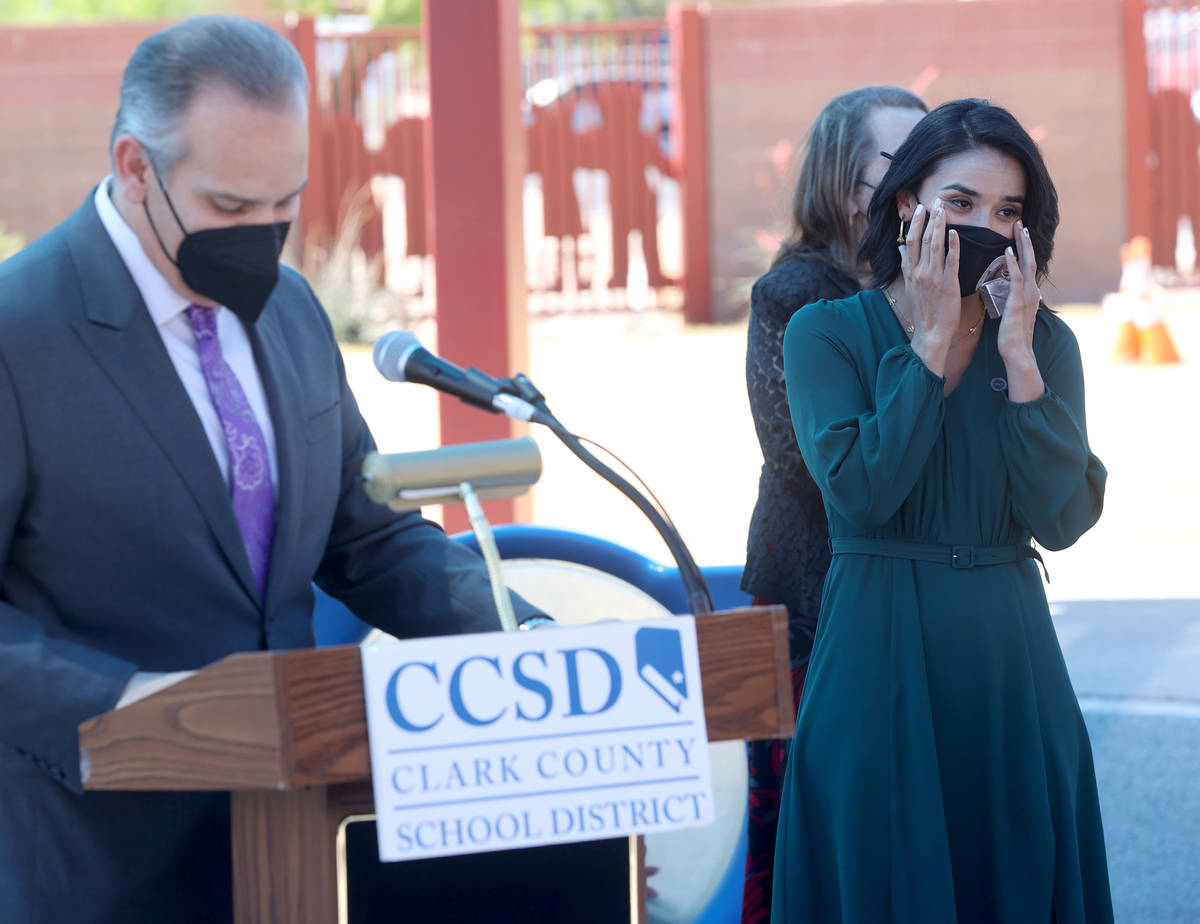 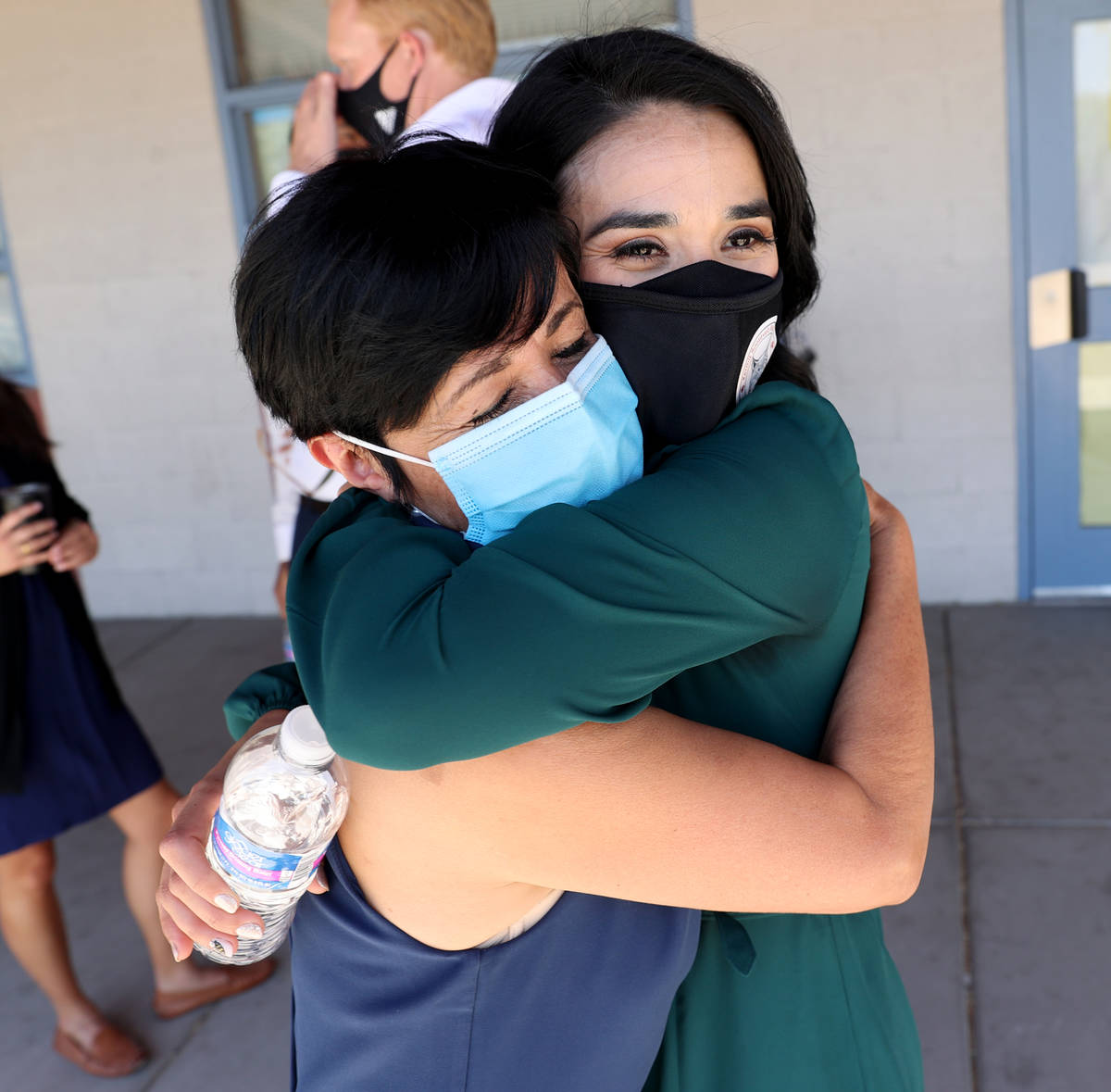 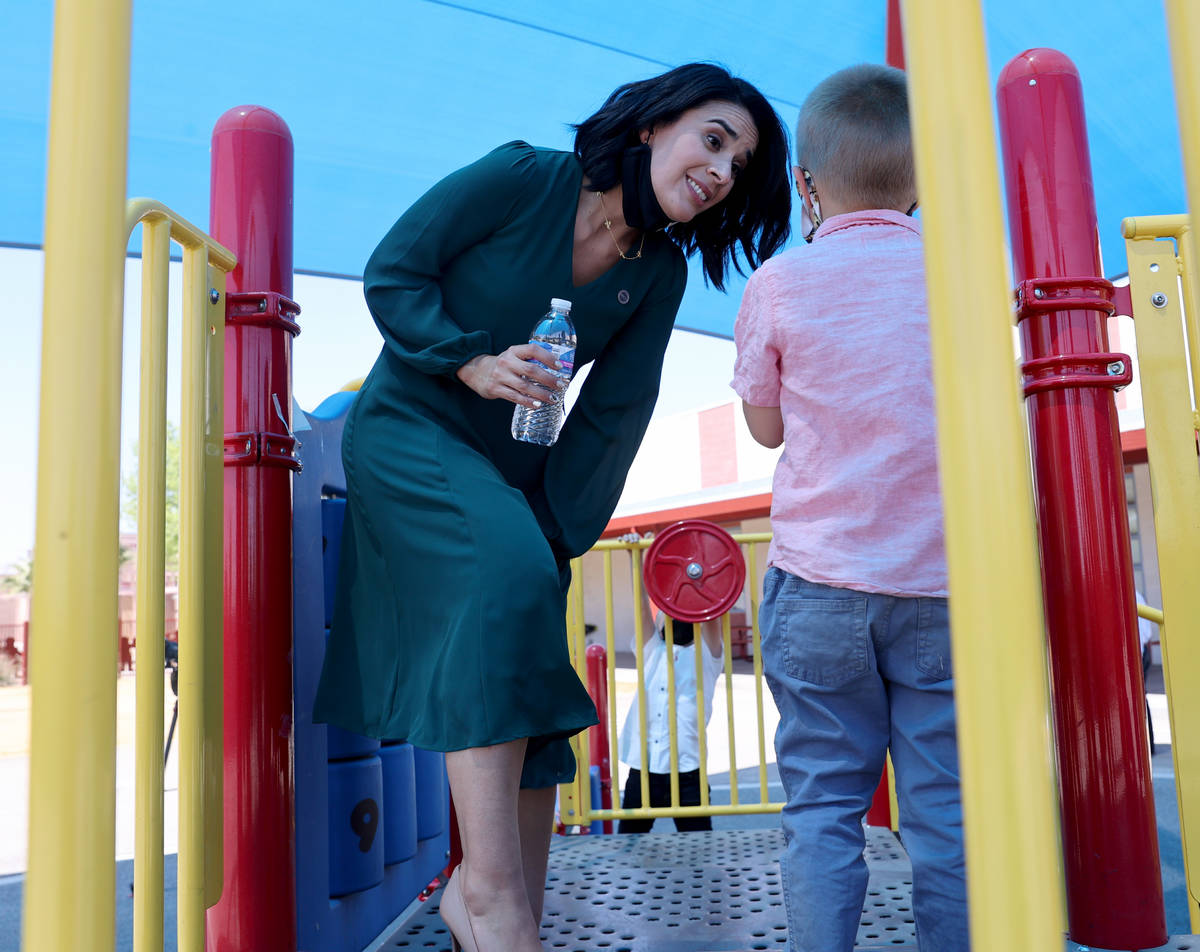 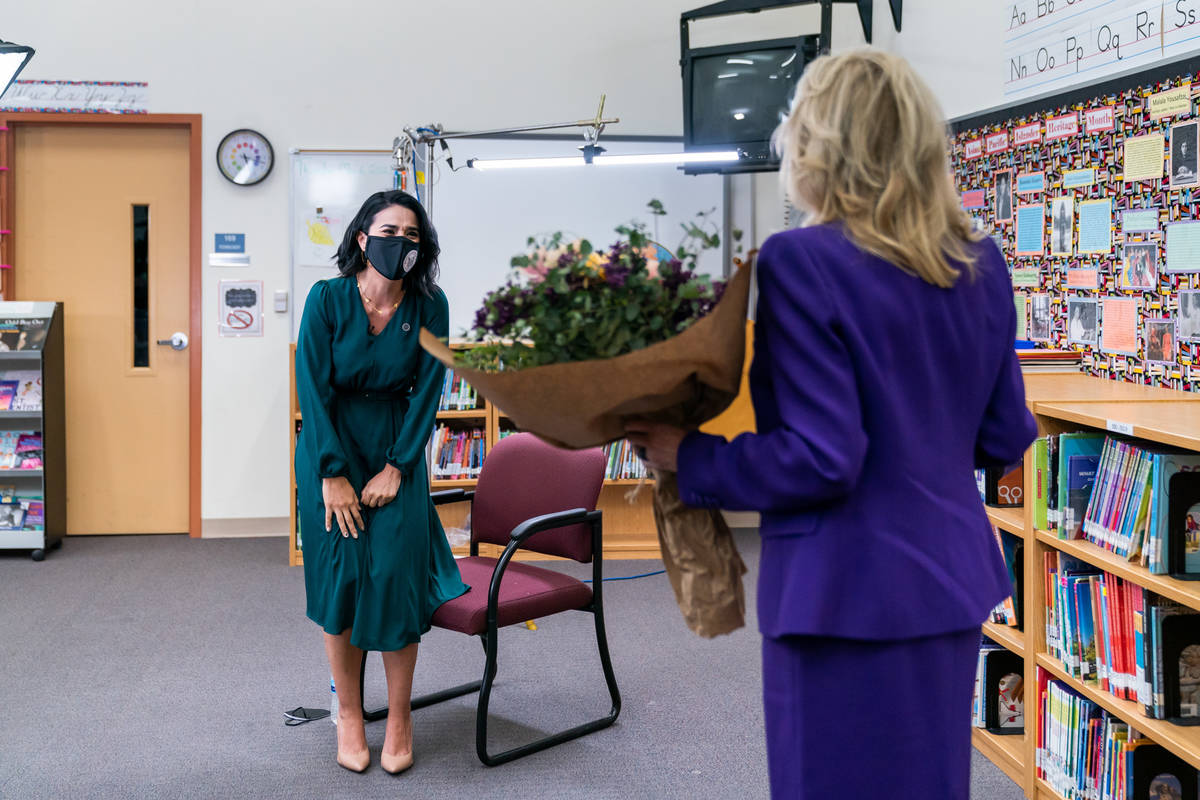 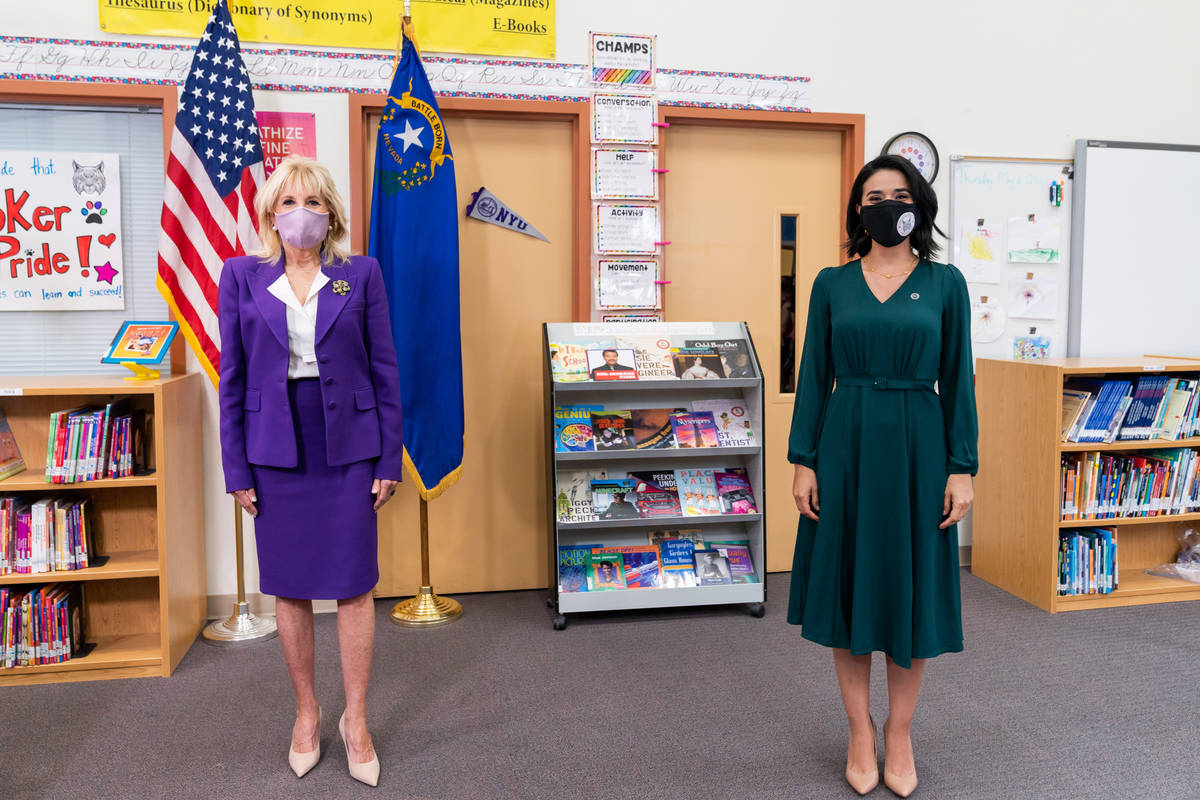 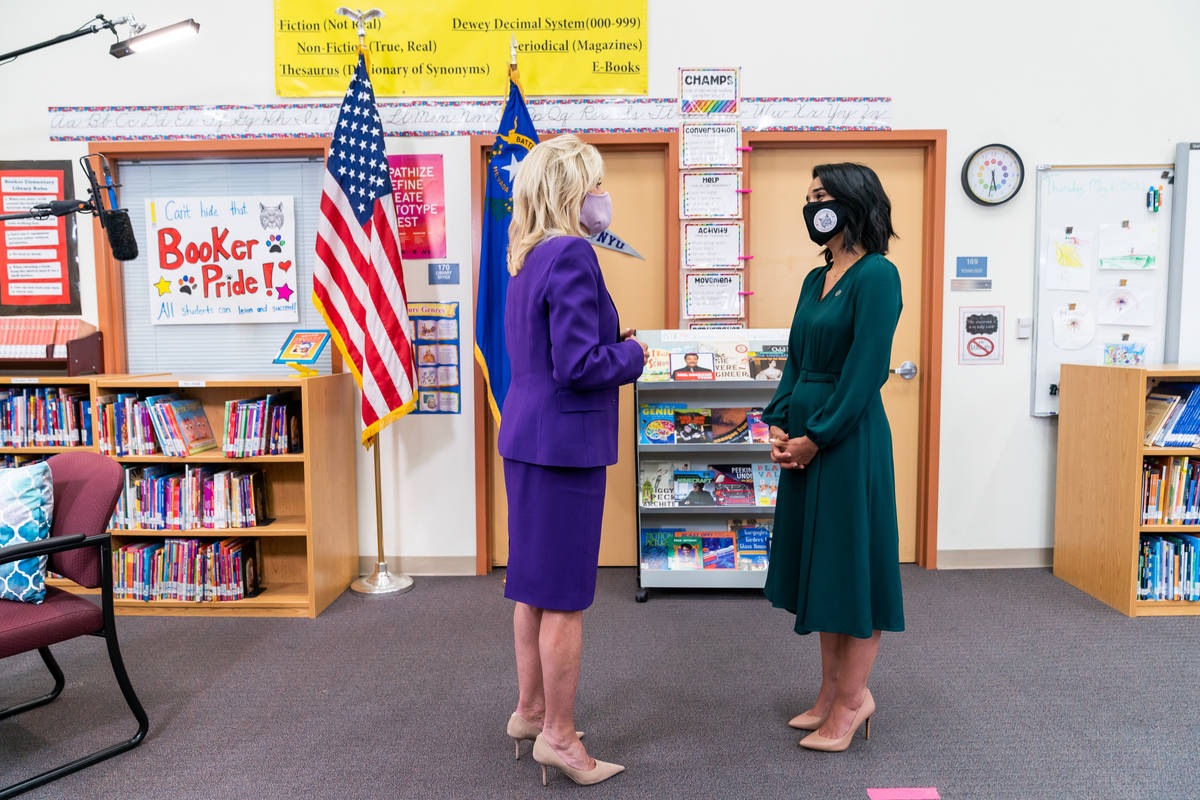 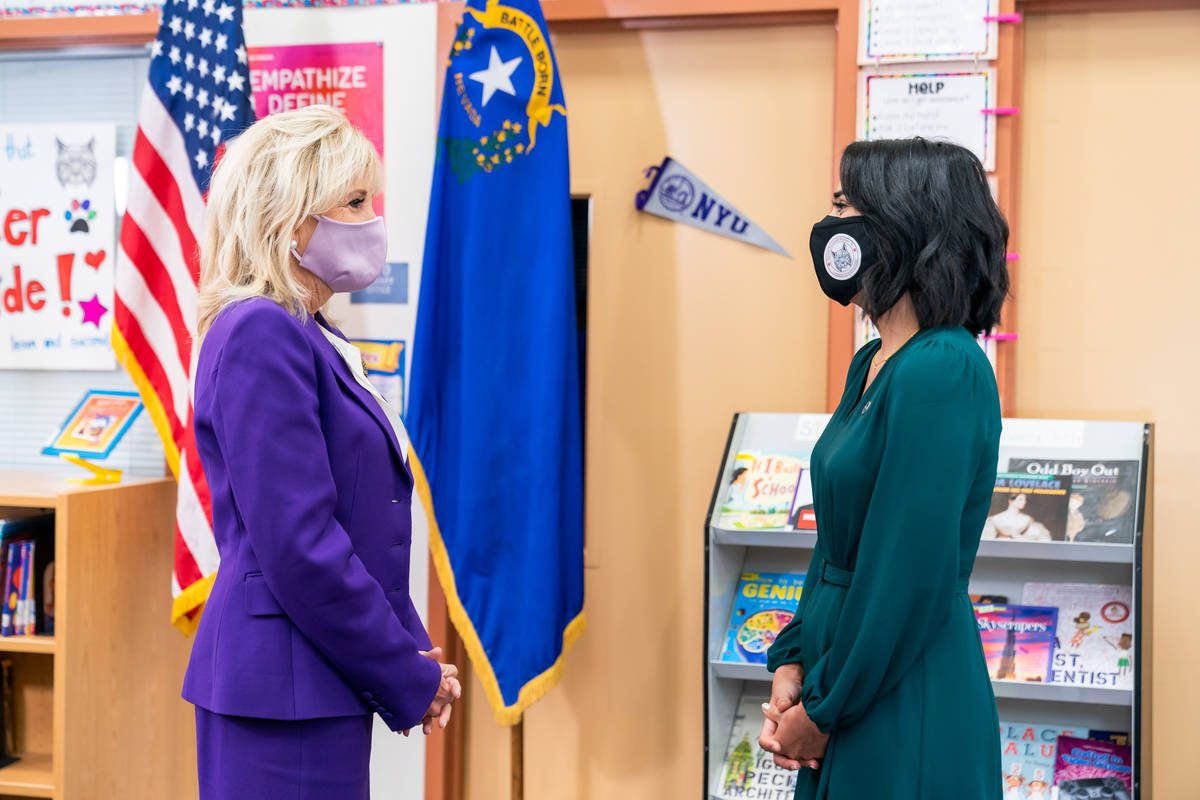 A Nevada educator was recognized Thursday as the 2021 National Teacher of the Year, becoming the first Nevadan to win the prestigious award.

The honor for Booker Elementary School special education teacher and learning strategist Juliana Urtubey was announced on “CBS This Morning” and included a surprise visit to the school by first lady Jill Biden, a fellow educator.

“I am so grateful,” Urtubey said at a Thursday morning event organized by the Clark County School District, offering praise for her fellow Booker teachers and the other finalists for the award.

“As a special education teacher, my job is to find strengths within students, and I fully believe all of our children have strengths.”

Urtubey is the first Latino Teacher of the Year since 2005 to win the award, according to the Council of Chief State School Officers, which oversees the presentation.

Several of her former students were featured on the CBS show after she was announced as the winner.

“I get to be part of a whole new world with so many students,” Urtubey said during the segment. “I haven’t seen so many of those students in such a long time, so it’s so beautiful. I’m just so excited.”

Urtubey was named the 2021 Nevada Teacher of the Year in September, and represented the state in the national competition.

A National Board Certified elementary special education teacher, she’s also known as “Ms. Earth” for her “efforts to beautify schools and unify the community through murals and gardens,” according to the announcement by the school officers council.

“Juliana Urtubey exemplifies the dedication, creativity and heart teachers bring to their students and communities,” said the organization’s CEO Carissa Moffat Miller. “I look forward to her leadership and advocacy for a ‘joyful and just’ education for all students.”

She has taught at the Clark County School District since 2013 and was among 20 teachers named a 2018 recipient of a Heart of Education Award, a public recognition of local educators presented by The Smith Center for the Performing Arts and funded by The Rogers Foundation.

As the National Teacher of the Year, she’ll receive a paid year off from classroom duties, which will be covered by the state and district, while the council arranges travel and speaking tours, according to the organization’s website.

The Teacher of the Year frequently represents teachers in committees and councils, and serves as an advocate for the profession.

“Juliana is an exceptional teacher leader and we are so proud to have her represent educators from Nevada and across the nation,” said Nevada Superintendent of Public Instruction Jhone Ebert. “It is fitting that Juliana is Nevada’s first-ever National Teacher of the Year, as she exemplifies the values of equity and inclusivity that drive our collective work to support students and families.”