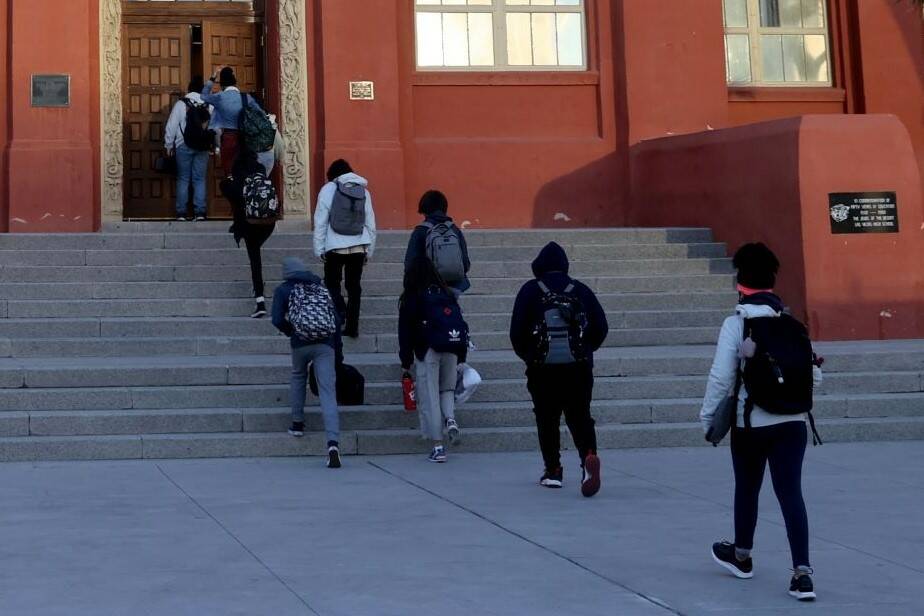 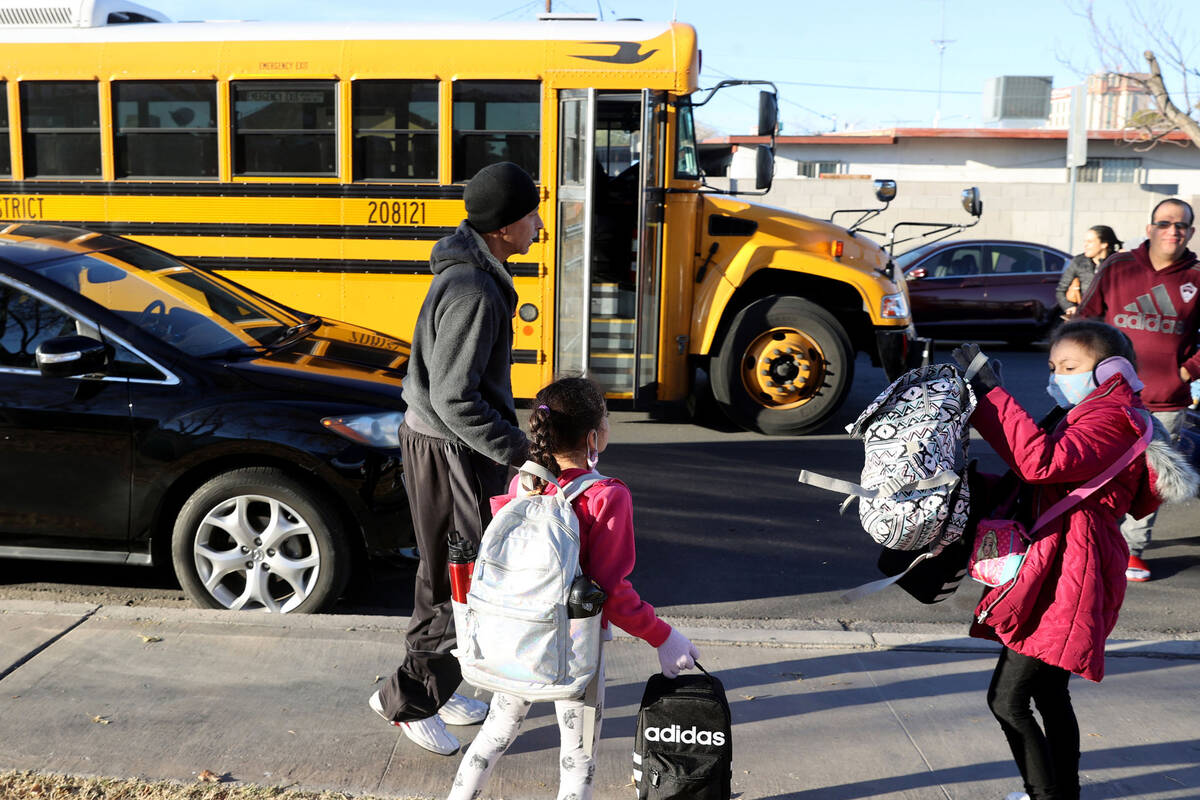 Juan Campos gets his daughter Damaris, 8 right and Diana, 7 ready for the bus on the first day of school after winter break Wednesday, Jan. 5, 2022. (K.M. Cannon/Las Vegas Review-Journal) @KMCannonPhoto

Clark County School District’s decision to cancel two days of classes — combined with a long holiday weekend — will help the district recover operationally after a surge in COVID-19 cases but it’s not clear how it may impact the community’s case rates, health officials say.

The school district, which has more than 300,000 students and 40,000 employees, announced last week that it’s canceling classes and activities for students under a “five-day pause” that began Friday because of “extreme staffing shortages.”

The district has seen case numbers increase drastically since it resumed classes Jan. 5 after winter break amid the spread of the more contagious omicron variant.

Dr. Marc Kahn, dean of the Kirk Kerkorian School of Medicine at UNLV, said Friday his understanding is the school district’s pause wasn’t so much to slow coronavirus transmission but rather a workforce issue because a “fair number of people” are out with COVID-19.

Kahn said he doesn’t know what impact the pause will have on case rates, but “clearly, whenever you prevent people from congregating in groups, you’re going to decrease transmission in a virus like COVID.”

Students will miss only two days of school since it’s already a three-day weekend because of the Martin Luther King Jr. holiday. They will make up those days Feb. 7 and April 25.

Employees participated in a staff development day Friday, which they were required to attend remotely from home. District staffers working Tuesday will also log in from home.

Monica Cortez, assistant superintendent of the school district’s student services division, told reporters last week she is confident classes will be back in session Wednesday.

She said the district isn’t predicting a shift to distance education, calling the five-day pause “an adjustment to our calendar.”

The Southern Nevada Health District said in a statement last week that it’s supportive of the district’s efforts to protect its employees, students and their families.

District Health Officer Dr. Fermin Leguen said Friday the pause will allow the school district an “opportunity to regroup their forces” and time for workers who’ve been out to recover.

In school district operations, “I think that it is a good opportunity to recover from the huge impact they suffered the initial two weeks” after reopening after winter break, he said.

It also provides the district a chance to look at its facilities and what it may want to restructure or prepare in terms of response efforts, he said.

But, Leguen said, the reality is COVID-19 transmission is widespread in Clark County, and it’s not just impacting the school environment for teachers and students. He expects there will still be some getting infected after the five-day pause.

He also acknowledged that holiday weekend travel is a risk in the potential impact on case numbers.

But, Leguen said, he still thinks the outcome for the school district is going to be better as a result of the pause.

Leguen said he wants to re-emphasize that “vaccination is still the most important and effective tool we have.”

The vaccination rate among children ages 5-12 in Clark County is “very low” compared with the rest of the population, he said.

More than 32,000 children ages 5-11 have initiated vaccination and more than 18,000 have completed a series as of Jan. 6, according to the health district.

An online dashboard shows about 33 percent of the estimated population in Clark County from ages 0-19 has initiated vaccinated and 24.1 percent have completed a series. Vaccinations are authorized for children ages 5 and older.

Overall, factoring in all age groups, the county has seen nearly 70 percent of its population initiate vaccination and almost 57 percent have completed a vaccination series.

The number of employee absences in the school district from Jan. 6-11 ranged from 1,826 to 2,147 daily, according to data provided by the district to the Review-Journal. That’s well above the average this school year of 1,396.

Those absences are from all reasons, including vacation and sick time, and it’s unknown how many are related to COVID-19 cases or quarantines for those who have been exposed to someone who tests positive.

The substitute fill rate — how many of those vacancies were covered by a substitute teacher — ranged from 19.3 percent to 22.2 percent. The district was already facing a worsening staffing shortage this school year, including a lack of substitutes.

The district’s central administrative office has been sending its own staff to help in schools, with approximately 36-44 employees deployed each day from Jan. 6-11.

The student attendance rate for the six school days from Jan. 5-12 hovered between 80.7 percent and 83.9 percent. That’s down from an average of about 90 percent this school year.

As for COVID-19 case numbers, the school district reported 12,523 cases since July 1 among students and employees, as of Friday. That’s an increase of 2,412 cases compared with Monday, according to its online dashboard.

The numbers may be even greater. Some parents and employees have posted on social media websites for more than a week saying they haven’t been able to get through district COVID-19 phone hotlines to report positive cases, exposures and possible symptoms.

The district received more than 8,400 parent hotline requests and more than 4,300 employee requests from Jan. 8 through Thursday night, she said.

Not everyone using those hotlines is reporting a positive COVID-19 case, though, Cortez said, noting some are using them as a resource to get questions answered.

The district recently created an online form, one for parents and one for employees, to fill out if they’re unable to get through a phone line.

Cortez said she believes the five-day pause will allow district staff to catch up on responding to parents and employees.

The district also expanded COVID-19 testing at designated testing sites beginning Jan. 10 to “household members” of employees “during this high transmission time,” it said in an announcement.

As of Jan. 12, the district had provided testing to 136 household members during the first few days of the offering, Cortez said.

Some parents have expressed frustration about the district’s decision to cancel classes, while others are in support, and some speculated about whether it’s a precursor to another round of distance learning.

Parent Dawn Allysa Hooker said in an email last week to the Review-Journal that she’s frustrated.

“I don’t think the 5 day pause will really help lessen the number of people getting sick, but it will throw a wrench in everyone’s schedule and disrupt learning,” she wrote. “Nevertheless, I am glad they didn’t force a return to virtual learning and I am really hoping that is not what’s next.”

Students were under 100 percent distance learning for about a year beginning in March 2020 before schools reopened for at least some in-person classes in spring 2021.

The district has been operating with full-time in-person classes this school year and has an online option through its Nevada Learning Academy at CCSD.

High school teacher Ryan Fromoltz posted on Facebook that students were still coming to school even if they weren’t feeling well, though he noted attendance rates among his students were low.

If employees have certain symptoms that could be associated with COVID-19, they’re blocked from coming into work through the emocha Mobile Health daily symptom monitoring tool the district uses, he wrote.

It can take days to get cleared to come back to work and, depending on the situation, employees may need a negative PCR COVID-19 test to return, Fromoltz wrote.

He also outlined other challenges such as schools combining multiple classes into one room because so many teachers are absent and a lack of substitute teachers.

“Sorry, but if anyone blames the teachers (it’s) not our fault,” he wrote. “This is politics folks. And we all suffer.”