The state Department of Education won’t release its highly anticipated star ratings for public elementary and middle schools until mid-December, but the Review-Journal is providing a sneak peek at the rankings for all the Clark County schools.

Using data obtained from the state on how it measures schools’ performance and information provided Thursday at a state Board of Education meeting, we calculated the star rating for each of the 284 elementary and middle schools in the Clark County School District. The state will not issue star ratings for high schools this year, with officials saying they need more time to work out how they will be rated.

This year’s ratings are especially anticipated, since the state has not issued them since 2014. An issue with testing data, a big component of the system, forced a halt to the system.

Since then, the state has also raised the bar, making it harder for schools to earn the top rating. 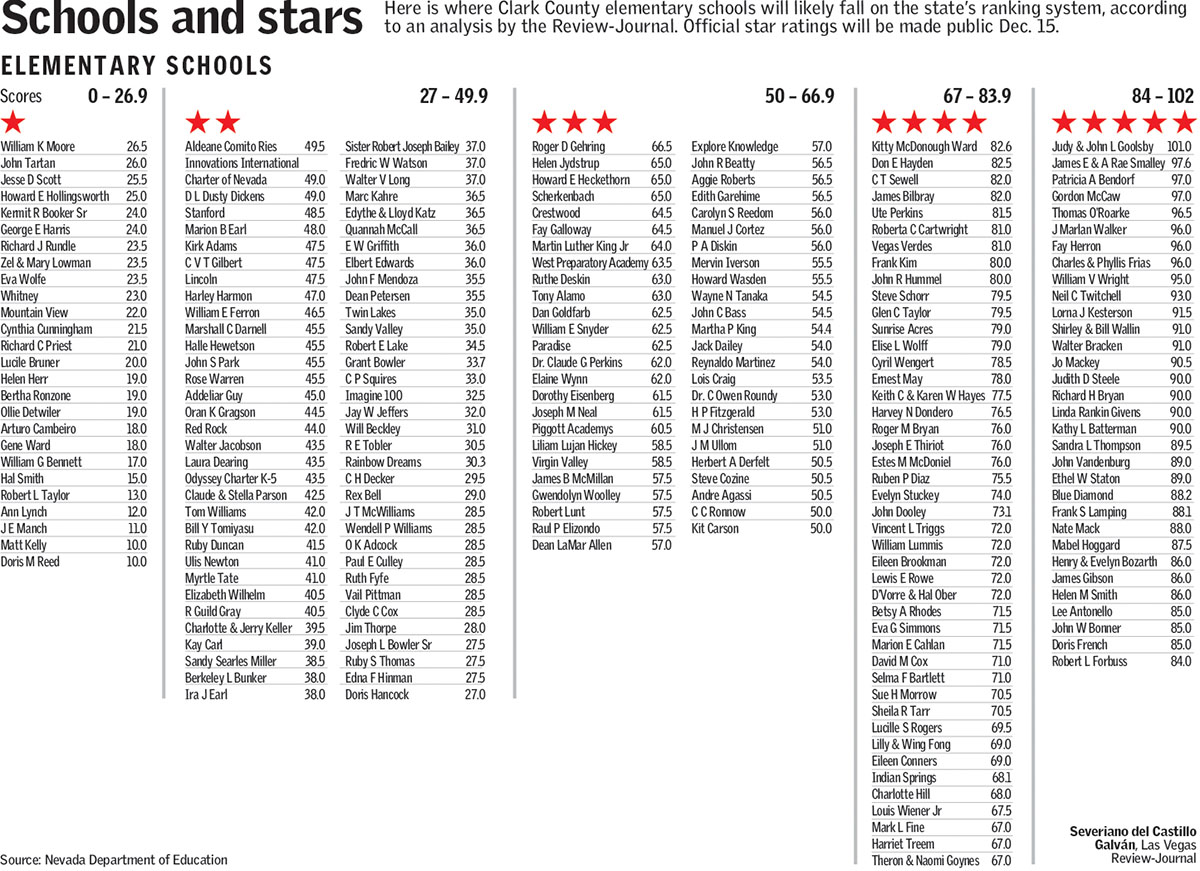 The school star ratings were initially due in September but were delayed because of concerns raised by superintendents statewide about the state’s ranking scheme.

As anticipated, according to our calculations, a larger number of Clark County schools will receive two or fewer stars next month, meaning they’re not meeting performance goals set by the state. State education officials say the reset is intended to more clearly measure the improvements it expects to see in coming years as a result of increased investment and performance-driven policies implemented in recent years.

“The main point is that the Nevada School Performance Framework reflects the starting line on our path to becoming the fastest improving state in the nation while taking a holistic approach to measuring school performance against high expectations, and provides actionable information for continuous improvement of our education system,” state spokesman Greg Bortolin said.

What the numbers show

You can check the accompanying chart to see how individual schools will fare under the new system, but here is the broad picture of how the ratings will shake out in Clark County, according to our calculations:

Out of 218 elementary schools:

For the 66 middle schools:

Mike Barton, chief academic officer for the Clark County School District, said the star ratings should serve as a diving off point for schools and communities and encouraged parents to get involved to learn more about the data.

“I think parents have a right to know how their schools are performing. I think it also a way to spark other conversations,” he said.

Data about how schools performed on state-mandated tests — a big factor in the star ratings — was released earlier this fall and showed that 47 percent of students in Nevada and Clark County in grades three through eight are proficient in English and that 35 percent are proficient in math, as first reported in the Review-Journal.

Since that data was made available, the district has been working with schools on improvement plans, Barton said. “Data is a good thing and it’s always a way to promote continuous improvement,” he said.

How we did it

The Review-Journal was able to calculate the star ratings by using data known as index scores for every school in the state, obtained through a public records request, and cross referencing that with information presented to the state Board of Education Thursday on how officials are dividing the index scores into the five star categories.

Schools get an index score by the state based on a number of factors, including student growth and achievement, graduation rates, college and career readiness, English language proficiency and students’ attendance. The highest index number a school can receive is 102.

The state then decided how to divvy up the index scores into the five ratings. Under this year’s formula, for example, an elementary school with an index score between one and 27 would earn a one-star rating.

On Thursday, state officials explained the process behind setting the cut scores — the dividing points between ratings — saying a three-star school is a school that is meeting the state’s goal under the Every Student Succeeds Act, the new federal education initiative.

A previous version of this article contained an incorrect percentage of middle schools getting four-star ratings.

Schools and Stars by Las Vegas Review-Journal on Scribd