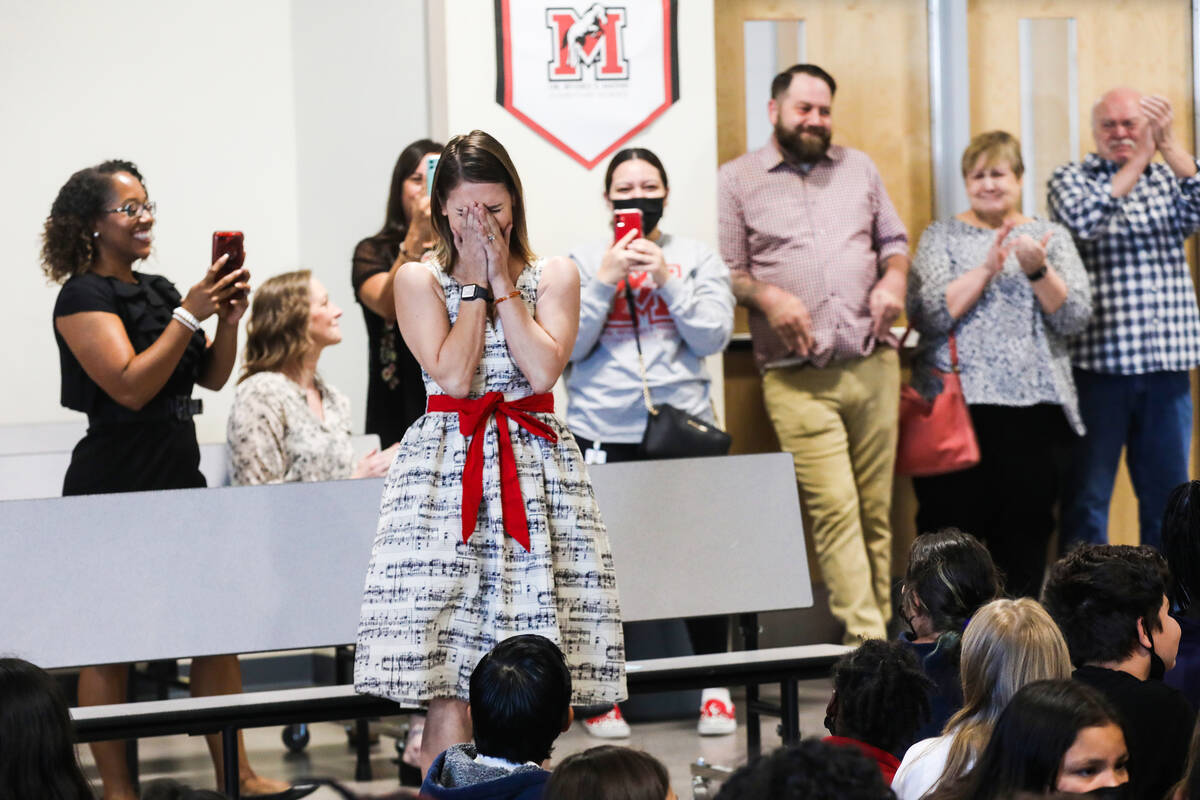 Music teacher Ali Jun reacts after she wins the Milken Educator Award, an accolade for general excellence as an educator that comes with an unrestricted $25,000 prize, at Dr. Beverly S. Mathis Elementary School in Las Vegas, Tuesday, May 3, 2022. (Rachel Aston/Las Vegas Review-Journal) @rookie__rae 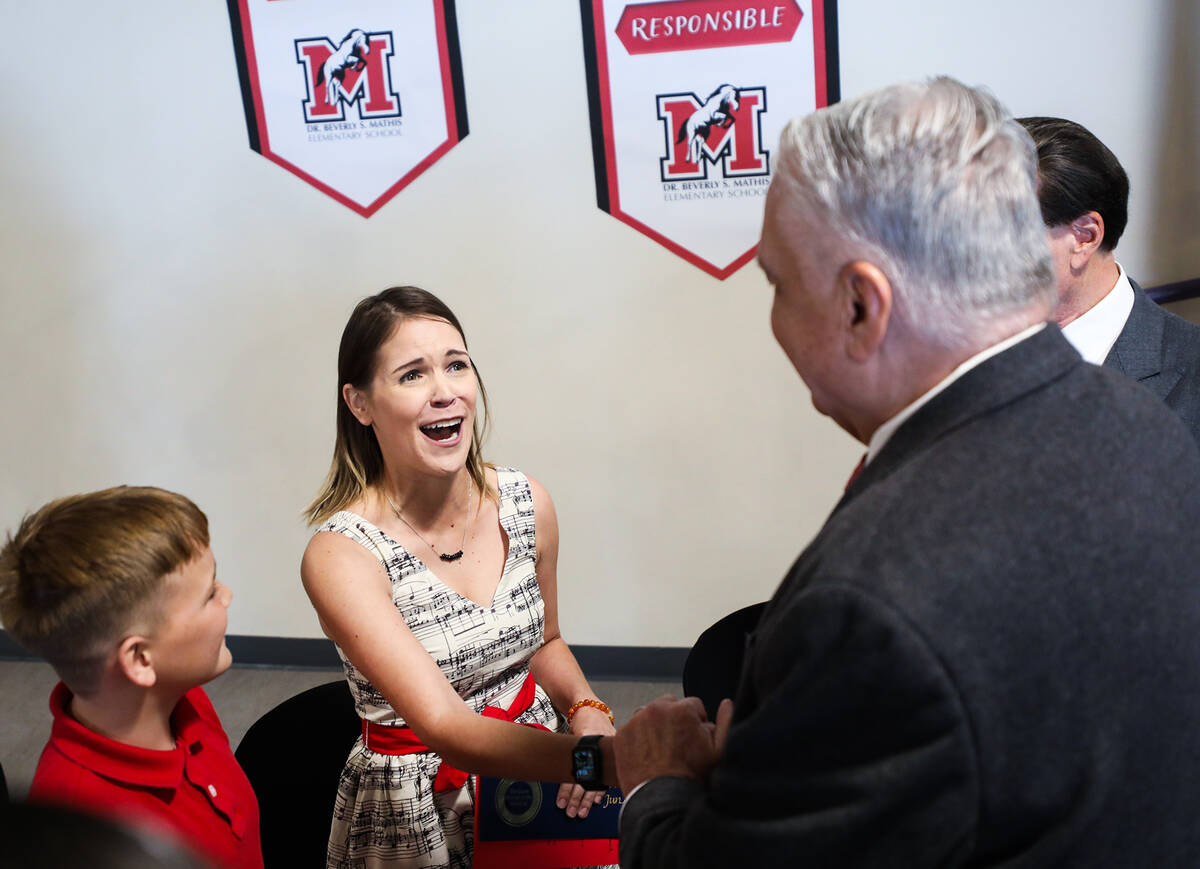 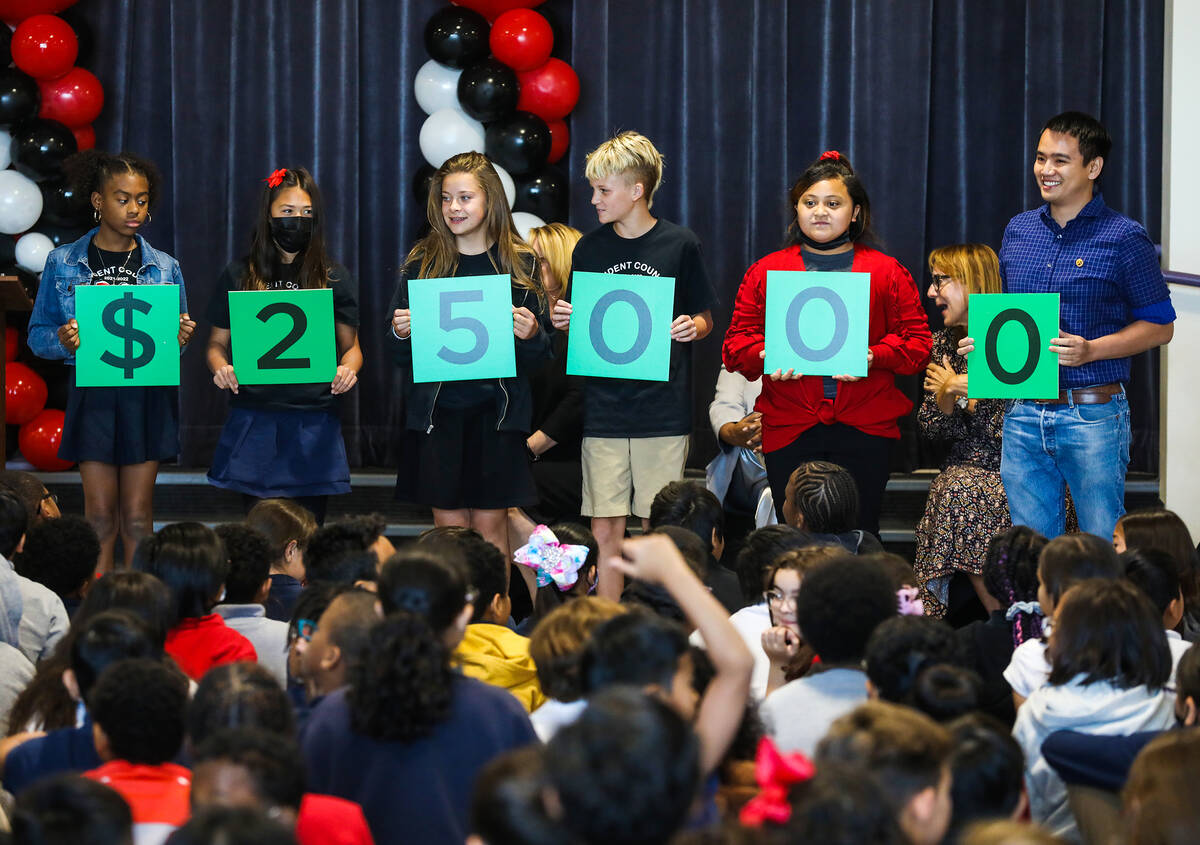 Students hold a sign of the cash prize of $25,000 at an assembly to present the Milken Educator Award at Dr. Beverly S. Mathis Elementary School in Las Vegas, Tuesday, May 3, 2022. (Rachel Aston/Las Vegas Review-Journal) @rookie__rae 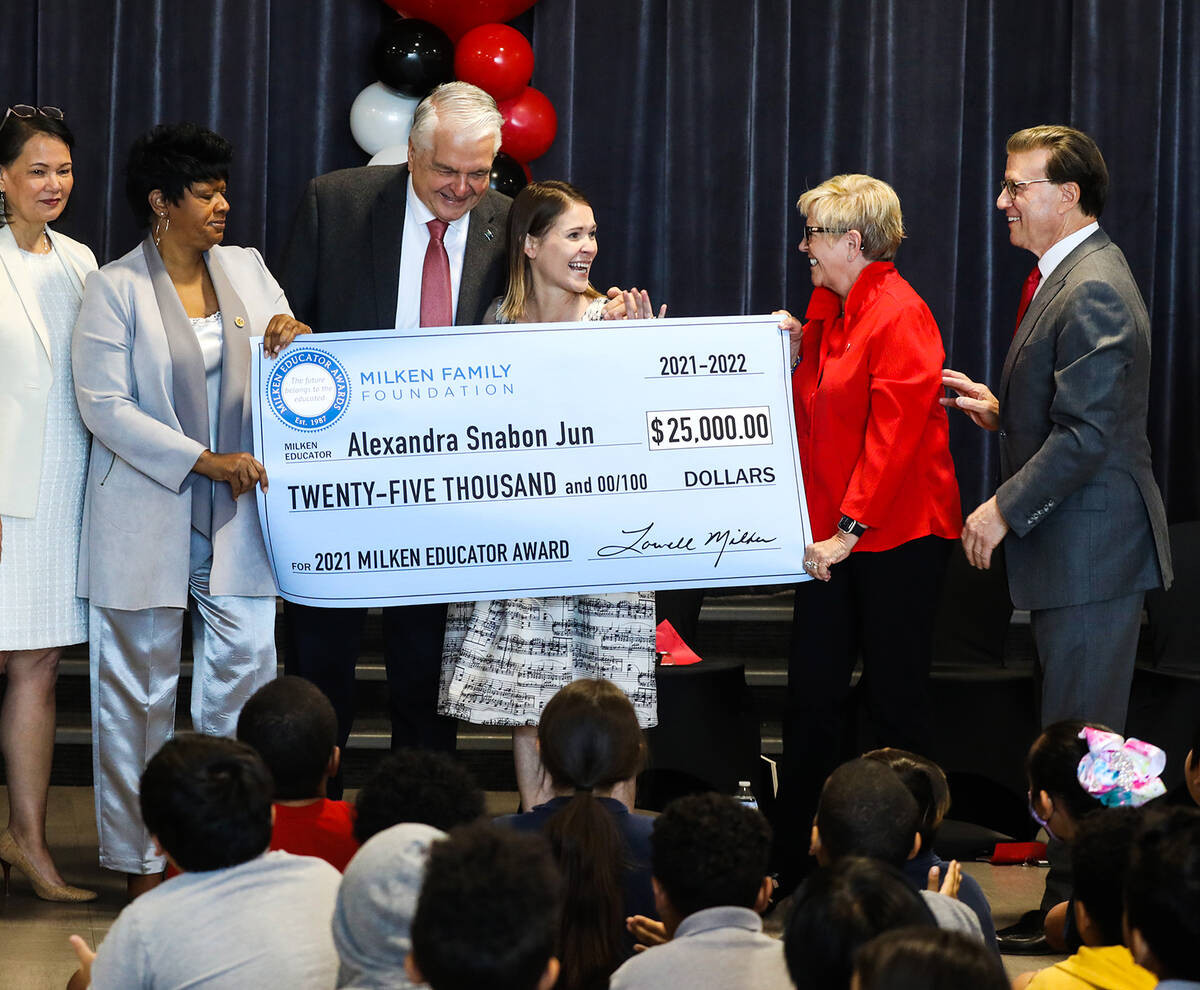 Nine-year-old Mycah Carte has been in Ali Jun’s music class since kindergarten, and the fourth grader was present Tuesday as his teacher received Nevada’s 2021 Milken Educator Award and $25,000.

“I think she really does deserve this because I know she’s been working really hard, and I really appreciate that,” Mycah said of Jun, a music specialist at Mathis Elementary School in southwest Las Vegas.

Awards are given out annually by the California-based Milken Family Foundation. Some 60 educators will receive the surprise awards at school assemblies across the country this year, according to the foundation.

After receiving the award onstage at school Tuesday, Jun said she was flabbergasted.

“I don’t even know what happened when they announced my name,” Jun said. “Just seeing all my colleagues and my students being so thrilled, it’s a phenomenal moment and I’ll never forget it.”

The $25,000 is unrestricted, and previous award recipients have used to finance field trips, establish scholarships, pay for their children’s education and even to adopt children, according to the foundation.

“Ali Jun demonstrates excellence in arts education. She fosters creativity, critical thinking, perseverance and self-confidence that benefit students across the curriculum,” Milken said in a statement. “Ali’s enthusiastic spirit shines beyond the classroom, where she contributes to the strength of the faculty, engages families and serves as a model member of the community.”

More than 2,800 educators have received the awards since 1987. Milken said the award is given to teachers in the early or middle stages of their careers because they can do even greater things in the future.

Educators can’t apply for the award and don’t know when they are nominated, according to the foundation. Instead, candidates are sourced through a confidential selection process and reviewed by panels appointed by individual state departments of education, and finally approved by the Milken Family Foundation.

“As a teacher, it’s quite often you second guess what we’re doing because there are so many students and we have them for such a small amount of time,” Jun said.

Jun teaches students skills such as rhythm, musical notation and ear training. She also was congratulated Tuesday by the woman for whom the school is named, Dr. Beverly S. Mathis, who also was honored as a Milken Educator in 2000.

“Thank you for being your true self with me from kindergarten to fifth grade,” Jun said to her students after receiving the award. “I love you all and I hope and pray that you all continue on with music.