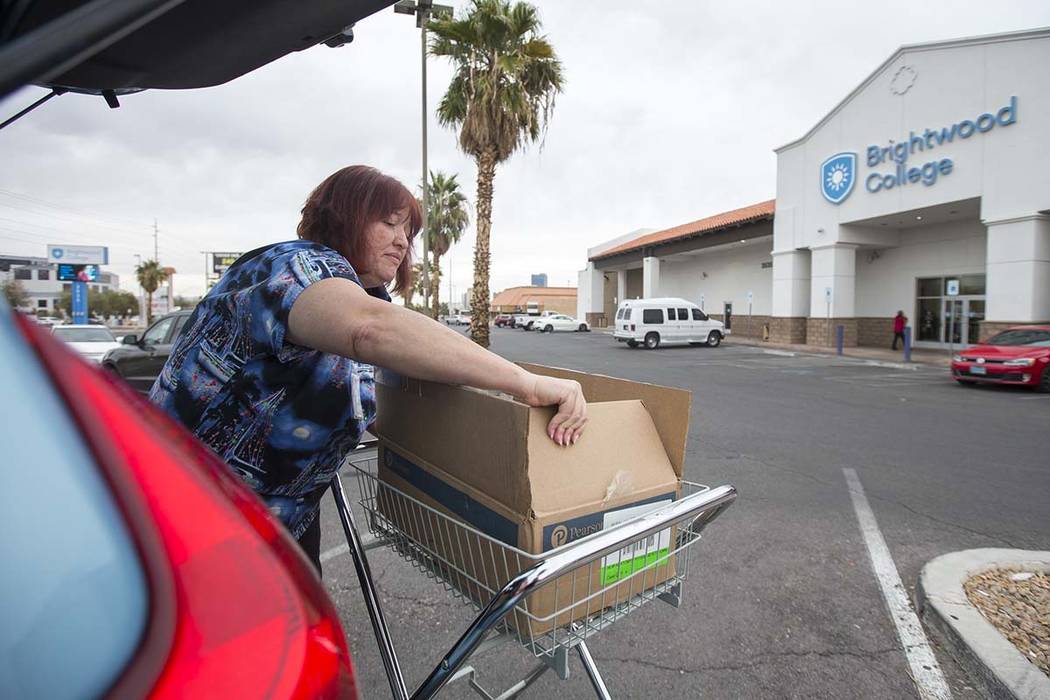 Nicole Rainey had a plan.

The 22-year-old mother of two was going to put work on hold for 13 months while she completed a practical nursing program at Brightwood College in Las Vegas. Then, she was going to return to work and try to complete a higher-level nursing degree online.

She got a Pell Grant, took out $12,000 in federal loans and secured a private loan, too. The single mom also ran up child care bills for her 5-year-old daughter and her 8-month-old son.

Her plans came crashing down Wednesday as Brightwood, a private, for-profit nursing school, shut its doors abruptly, leaving students and staff in the lurch. Rainey said she and other students had heard rumors about a possible closure three weeks ago, but were assured that the local campus was in good standing and wouldn’t be affected.

Instead, she got an email saying the college would close for good on Friday.

“It’s devastating,” said Rainey. “I think I’d rather have just not gotten into the program instead of getting in the program, starting it, then getting it taken away.”

Brightwood College on Sahara Avenue — which has also been known as Professional Careers, Inc., Heritage College and Kaplan College since 1990 — was one of many campuses nationwide shuttered by Education Corp. of America. The Las Vegas campus offered seven certification programs, including medical billing and coding, medical assistant X-ray technician and practical nursing.

Education Corp. of America owns more than 75 Brightwood campuses across the U.S. and enrolls at least 20,000 students in mostly certificate-granting professional disciplines such as cosmetology, culinary arts and medical and dental assistant programs, according to Insider Higher Ed. The company has previously had financial issues, according to the publication, and recently launched a lawsuit against the U.S. Department of Education trying to maintain access to federal student aid. The lawsuit was dismissed.

About 670 students attended the Las Vegas campus last year, according to the National Center for Education Statistics, which relies on data reported to the U.S. Department of Education. Tuition was more than $16,000 for the 2017-18 academic year.

An employee at the school declined to comment on the closure, referring media requests to the parent company. Multiple calls and emails to Education Corp. of America were not returned.

Fred Olmstead, a lawyer with the Nevada State Board of Nursing, said Brightwood College students performed well academically and had an 84 percent success rate passing the required exams to begin working as licensed practical nurses.

“We got the news today with everybody else,” Olmstead said. He said the board is giving affected students information about other schools in the state where they may be able to continue their educations. UNLV, Nevada State College and College of Southern Nevada all have nursing programs as well.

The email to students said they would receive credit for all the courses they took and passed by Friday. Information on accessing transcripts should be available in the next few weeks, according to the email. The email encouraged students to contact other institutions to find out whether they were eligible to transfer.

In 2016, ITT Technical Institute, also a nationwide for-profit college chain, shuttered 130 campuses with little notice. At the time, it was considered one of the largest college closures in American history. That chain was also plagued with financial issues before closure. ITT Tech had campuses in Henderson and North Las Vegas at the time of the shutdown.