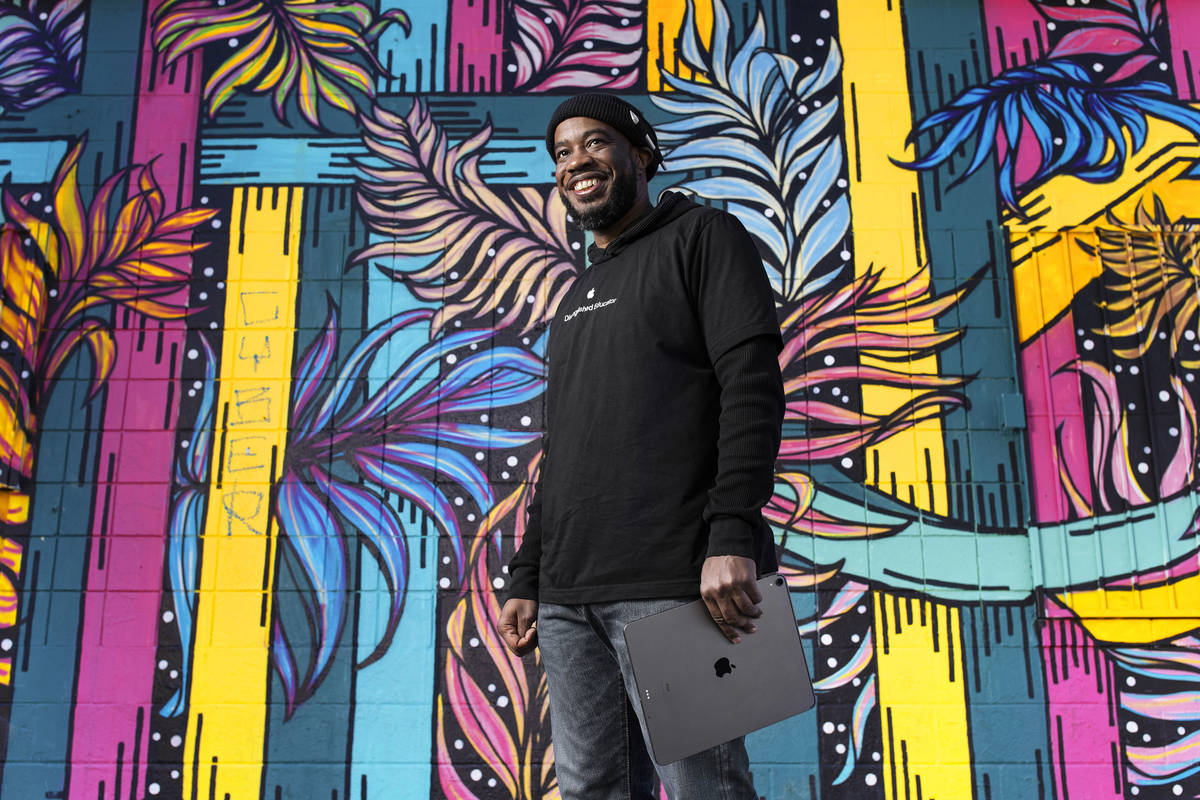 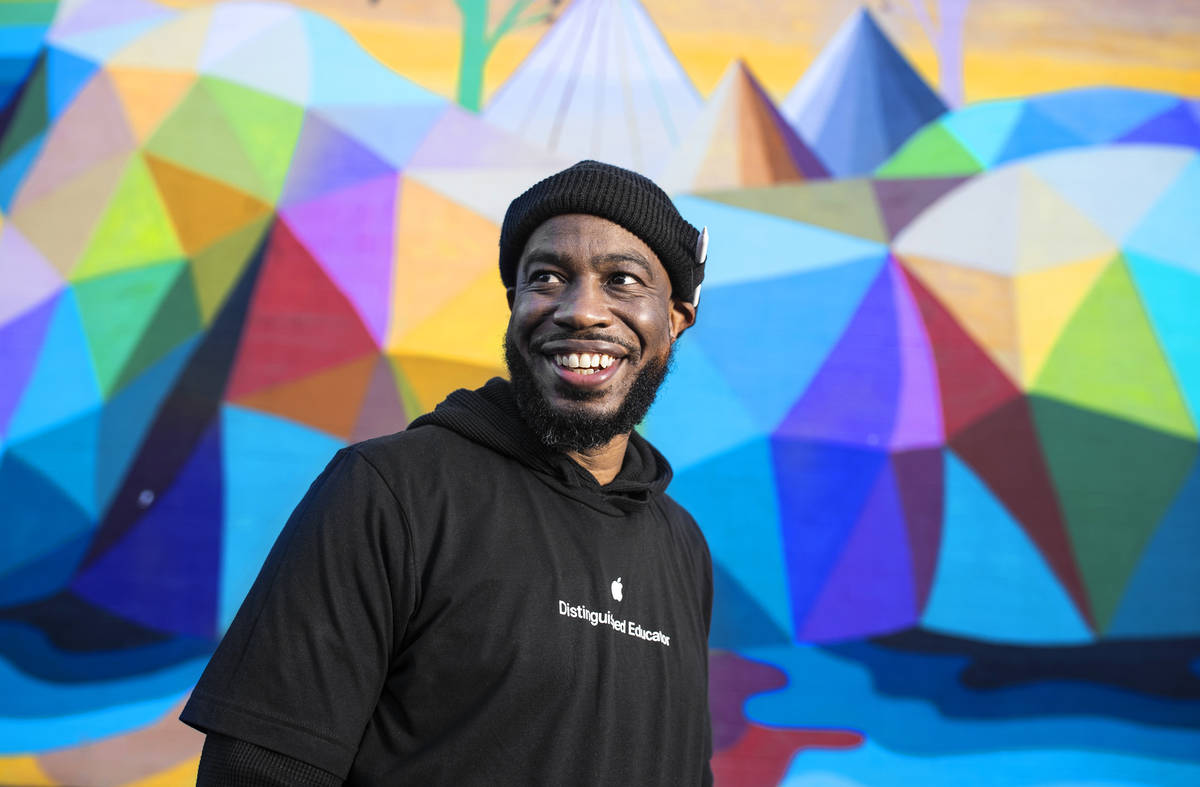 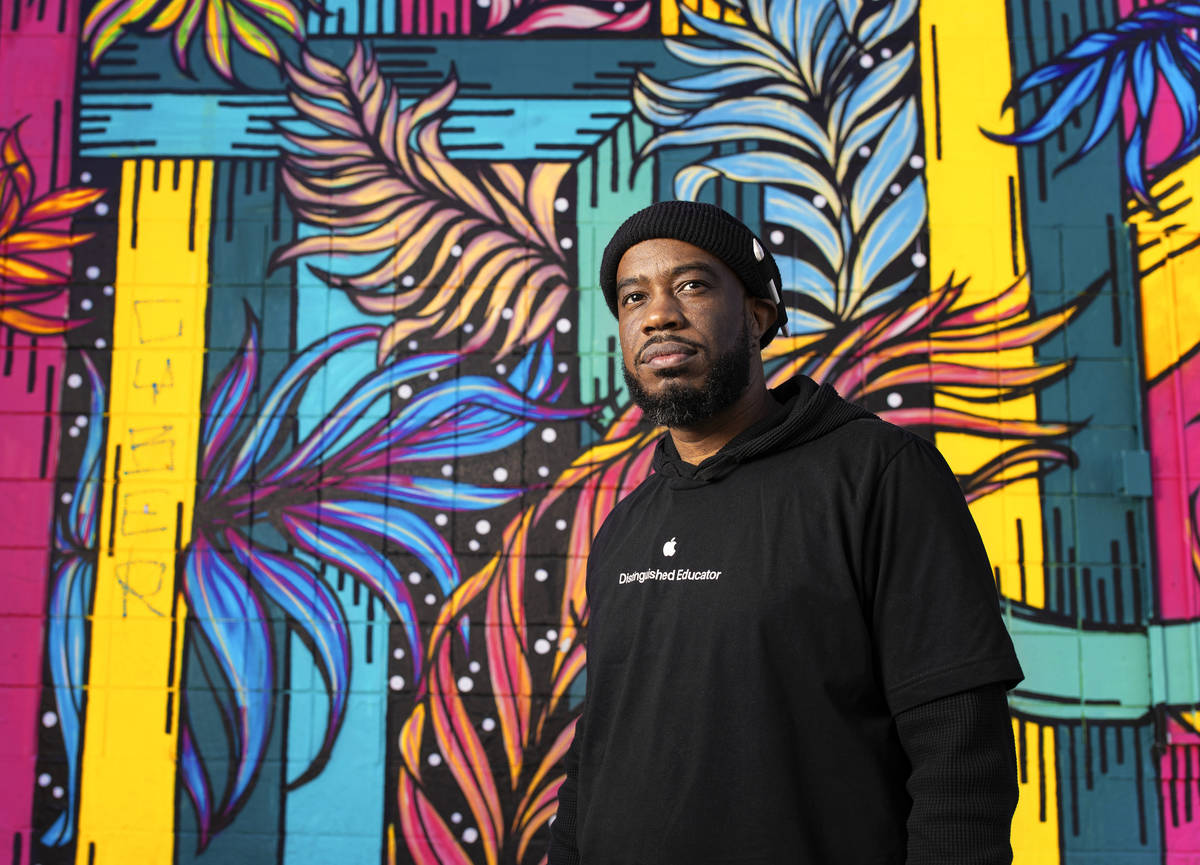 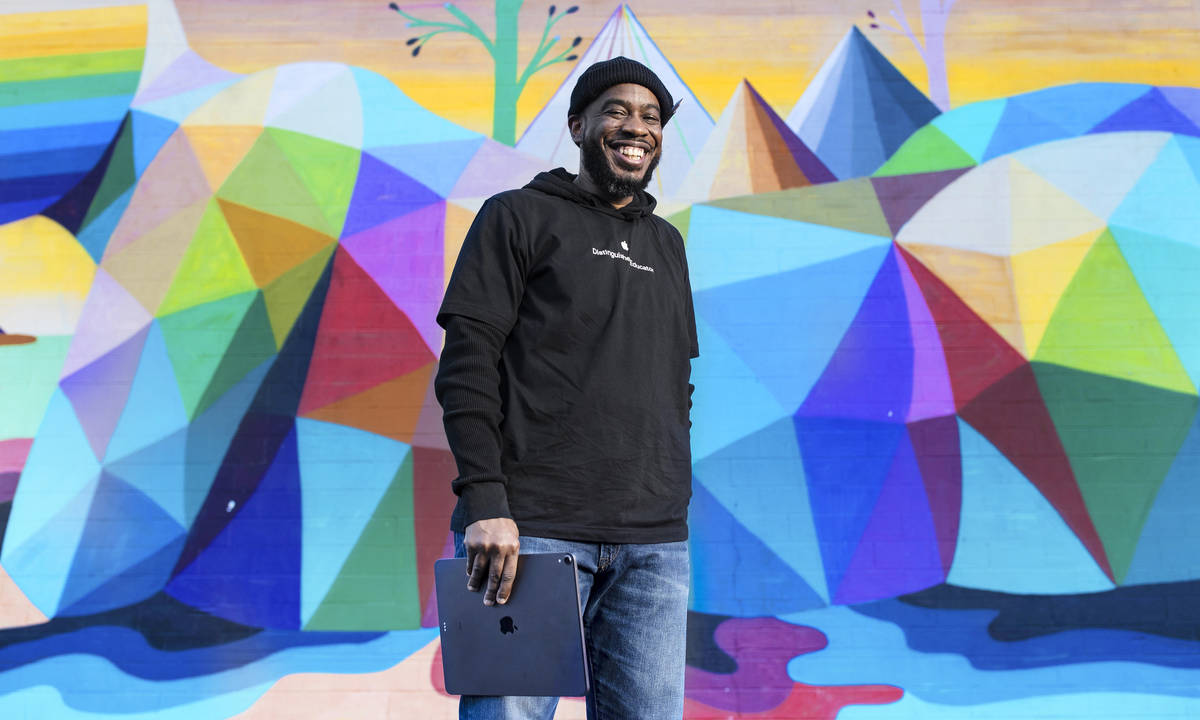 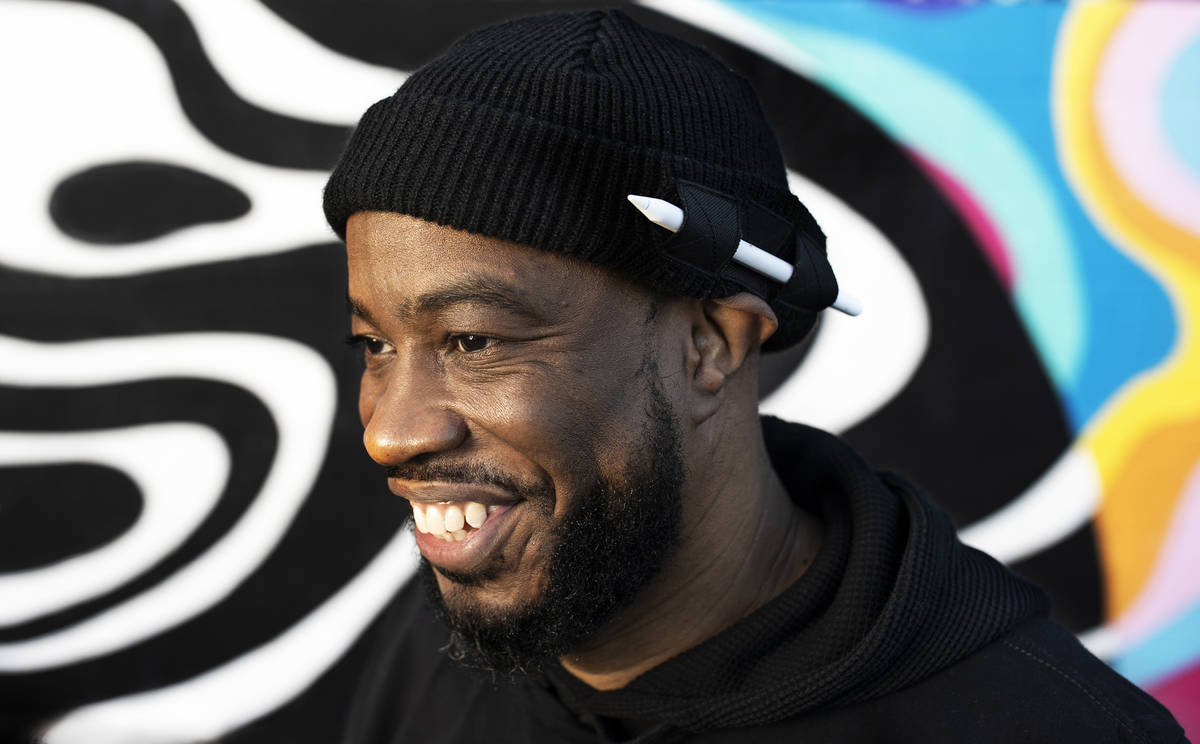 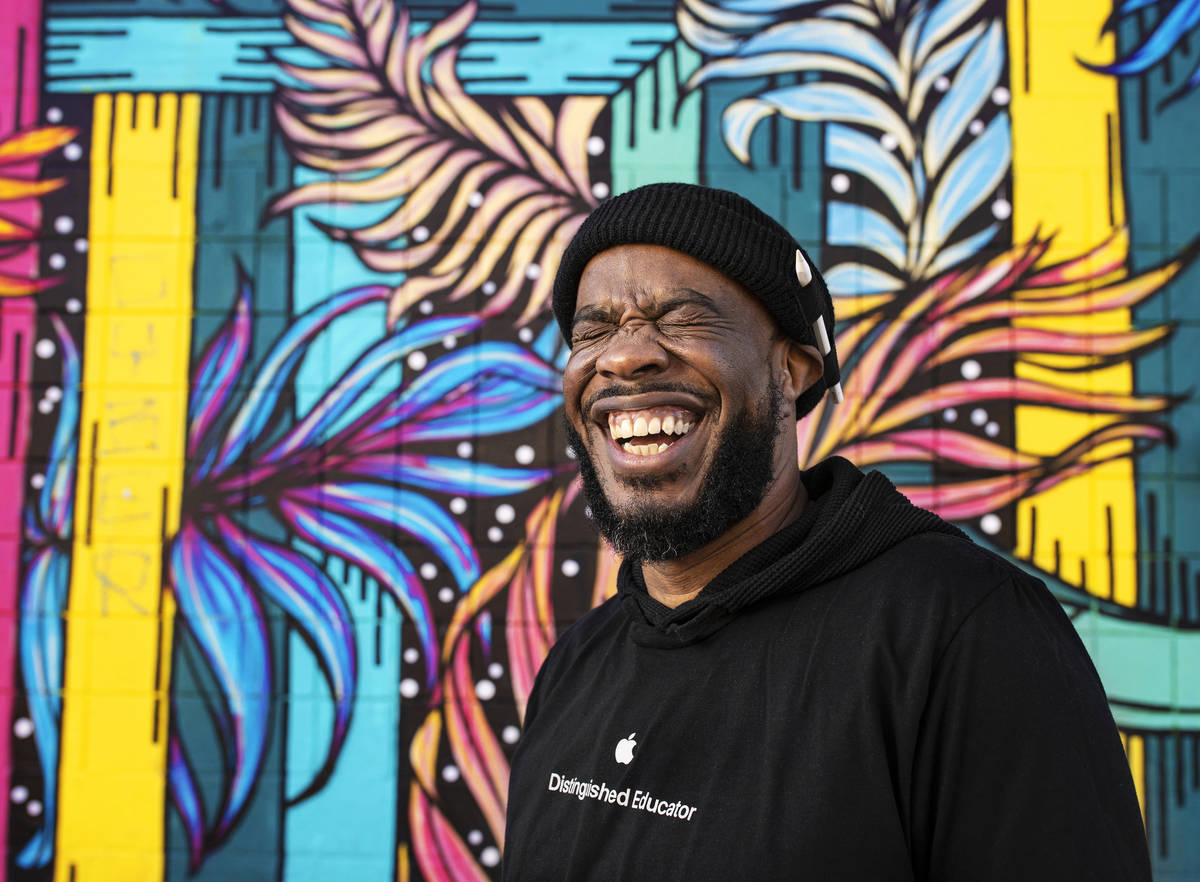 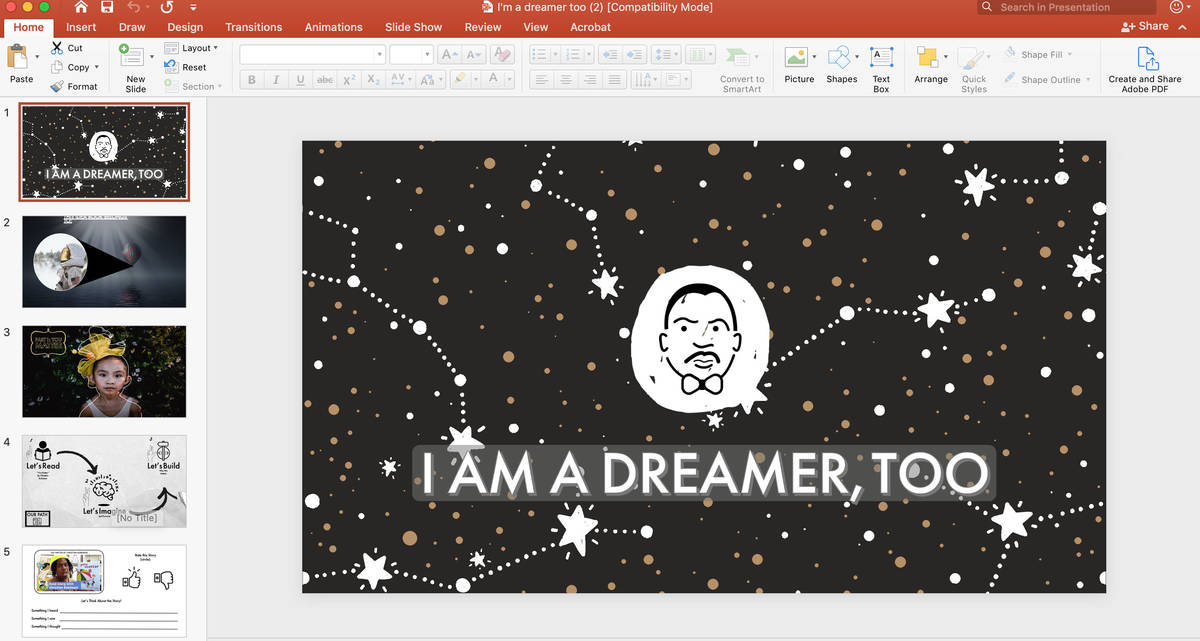 A page in a Keynote idea book created by Mike Lang, a technology teacher at Dearing Elementary School in east Las Vegas, is pictured. Students will fill out the book as they complete their project. (Mike Lang)

Martin Luther King Jr. should not be seen as “someone who is unapproachable and who exists in this theoretical place,” according to an east Las Vegas elementary school teacher who has been recognized for his innovative technology lessons built around Black History Month.

Mike Lang said the goal of the lessons surrounding the monthlong national celebration of Black Americans in February is to teach not only that King was someone amazing, but to inspire students with the message that “you’re amazing, too.”

Lang, 39, a technology teacher at Dearing Elementary School who has worked in the Clark County School District for 14 years, launched the three-part project on Jan. 19 with his kindergarten and first-grade students.

Students are using iPads for the project and work independently during distance learning. Classes meet weekly with Lang via the Google Meet videoconferencing platform.

Throughout the project, students will take and edit pictures of themselves, their family and their community. They’ll also create double exposure portraits that blend a personal photo with one of King, often remembered for his inspirational “I Have a Dream” speech, and use that to explore their own dreams for themselves and others, Lang said.

Last week, students looked at the work of photographer Cara Romero “to inform them about how photographs tell stories,” Lang said last week via email.

“They’ll be using this to brainstorm the types of photographs they might want to take.”

He said he expects the project to take two or three months to complete and hopes it will become a yearly tradition.

Lang said the students’ work will be compiled and shared with lawmakers and community leaders later this semester.

Tech giant Apple featured Lang on its website on Martin Luther King Jr. Day on Jan. 18. Lang is among 2,947 teachers worldwide who are part of the Apple Distinguished Educators program.

Lang applied and was accepted to the program in 2015. Since, he has traveled all over the country — and even spoke in Berlin in 2016 — helping teachers use Apple products so they can help their students be “creative instead of passive learners,” he said.

Over the summer, Lang began thinking about what he could do with students for Black History Month.

He said he wanted to use King and the civil rights movement as a backdrop, but also wanted his students to explore their own empowerment using photography.

“I think visual arts are often left to just art class,” he said, adding that it has been a powerful medium to express beliefs and philosophies throughout recorded human history.

As a technology teacher, Lang sees students for only about 15 minutes each week. But he says having such a short window gives him the opportunity to pose a question or make an assignment, then give students time to “chew on it and develop it and come back.”

Dearing Elementary Principal Christy Beaird said Lang is a remarkable teacher, adding that he was like “kid Velcro” when he was on pre-pandemic playground duty because he had so many kids swarming around him.

Lang also is excellent at aligning instruction with what’s happening at the school or connecting it with the real world, Beaird said.

Plus, she noted, “He’s always been on the cutting edge of technology.”

From D.C. to Las Vegas

He began his teaching career with a fourth grade class at St. Peter the Apostle Catholic School in Pascagoula, Mississippi, before it was destroyed by Hurricane Katrina in 2005 and integrated with a predominately white Catholic school in town.

“That showed me the power of proximity and open-minded thinking,” he said. When the students from the combined schools started seeing each other as human beings with similar interests, Lang said, “It was really kind of awe-inspiring.”

Lang also taught English in Taiwan, and the experience changed the way he looks at education.

He said his co-teacher helped him focus on his students and realize “that the user was the most important in the system, not the standards.”

Since joining the Clark County School District, he has worked at Adams Elementary School, West Prep Academy and Kit Carson Elementary School (since renamed to honor the district’s first Black female principal, Helen Toland), and as a digital learning coach and video editor for the school district. He has been at Dearing Elementary for six years.

Lang said he appreciates the Las Vegas Valley for the “rich melting pot of cultures and ideas it is.”