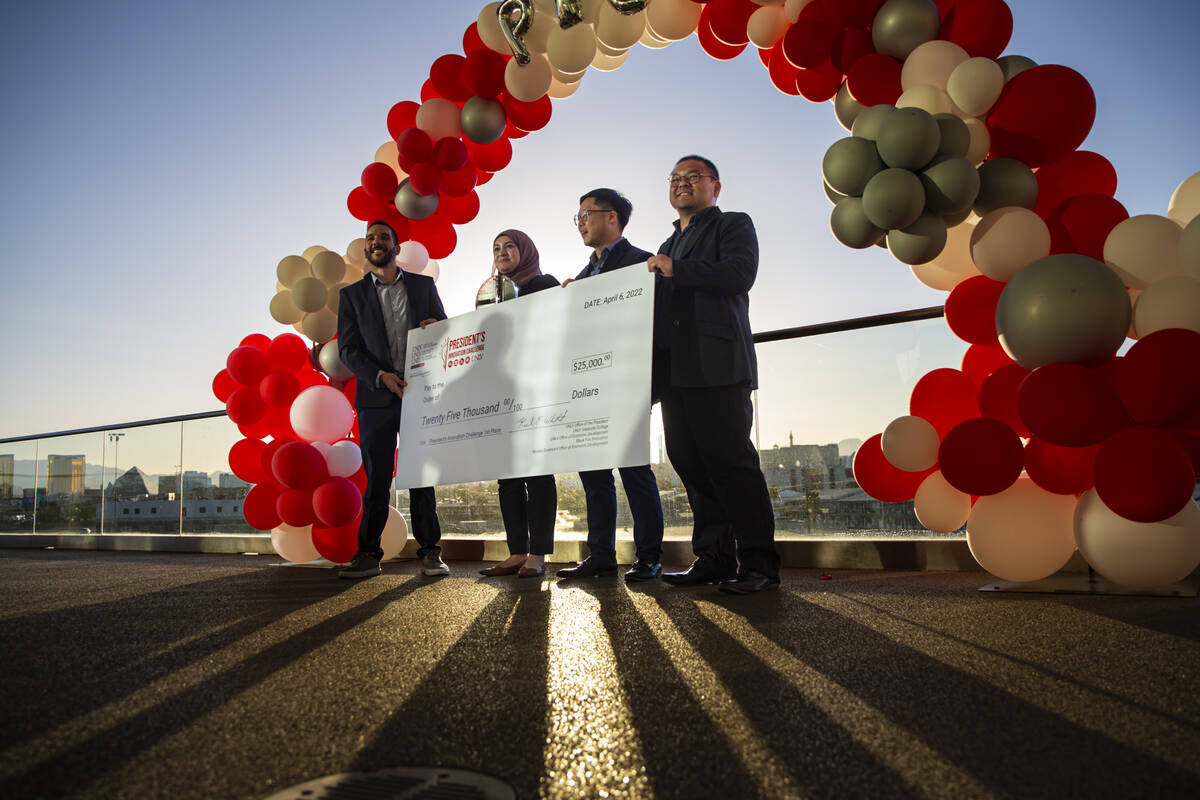 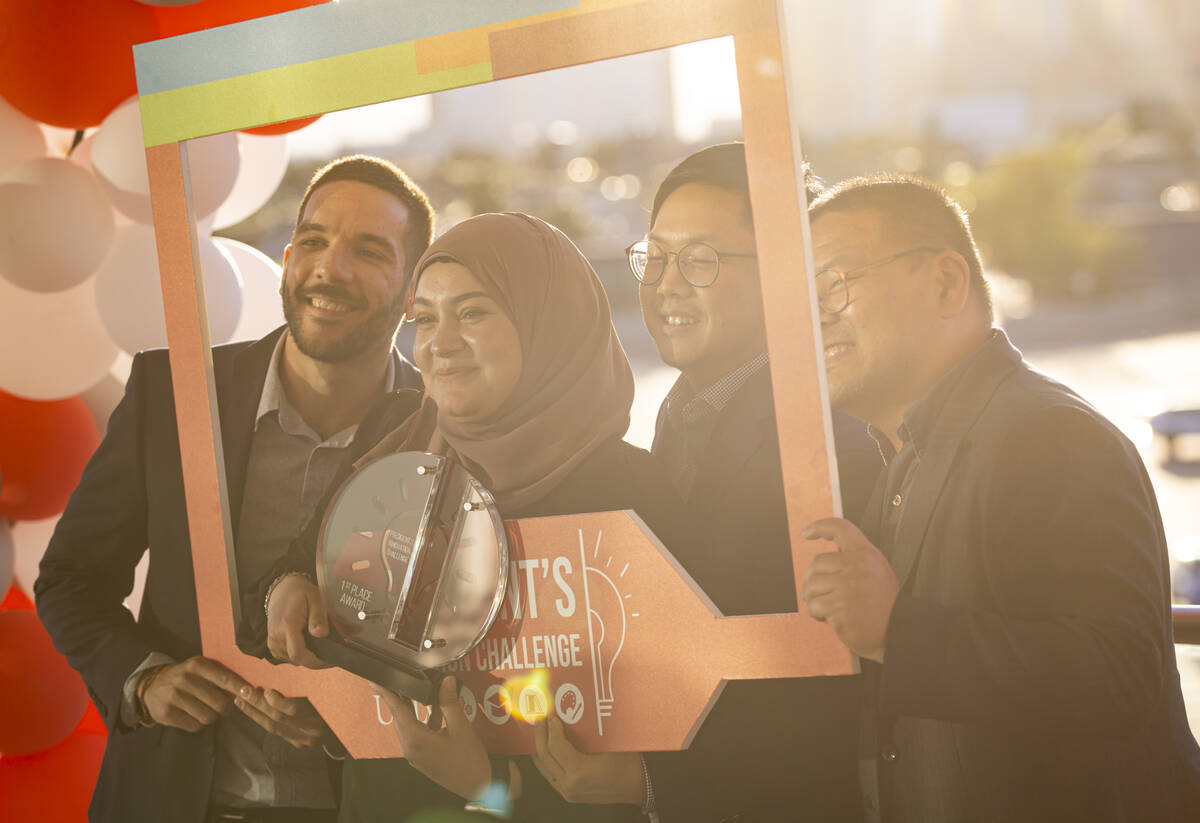 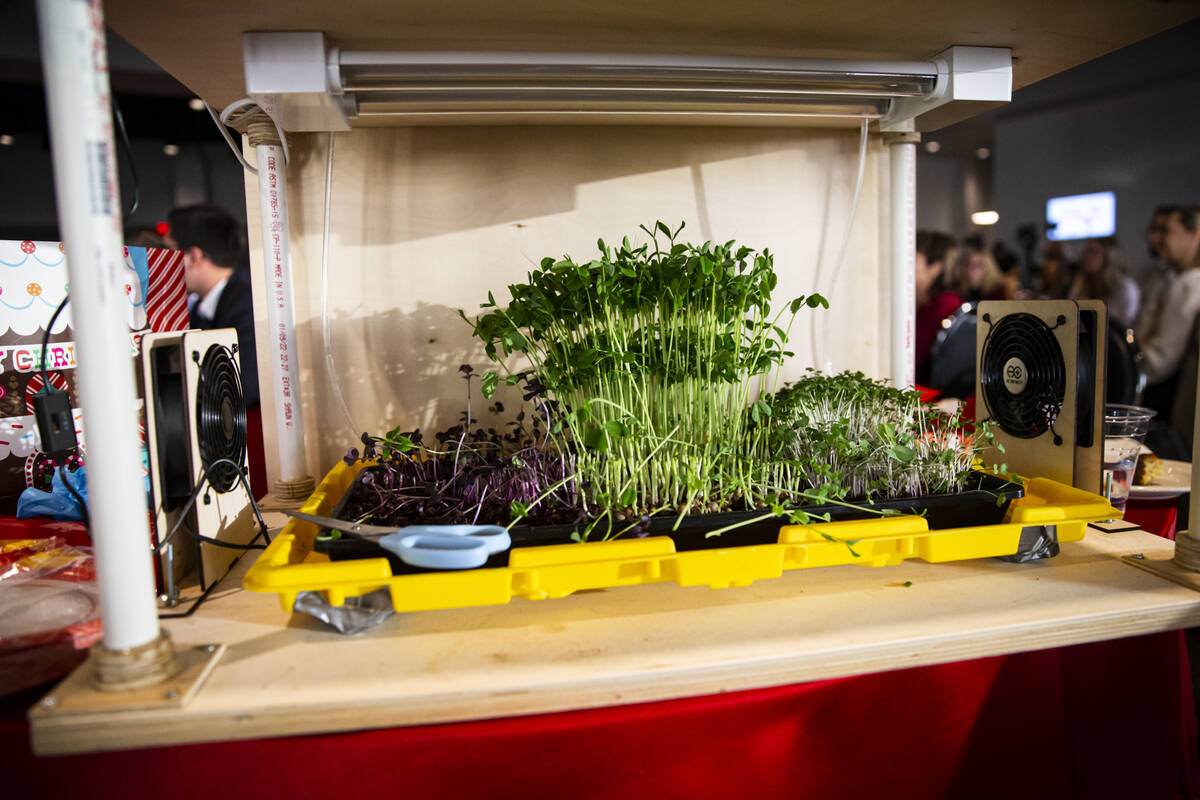 Microgreens are seen after a presentation by Esenjays for the inaugural President’s Innovation Challenge at UNLV on Wednesday, April 6, 2022, in Las Vegas. (Chase Stevens/Las Vegas Review-Journal) @csstevensphoto 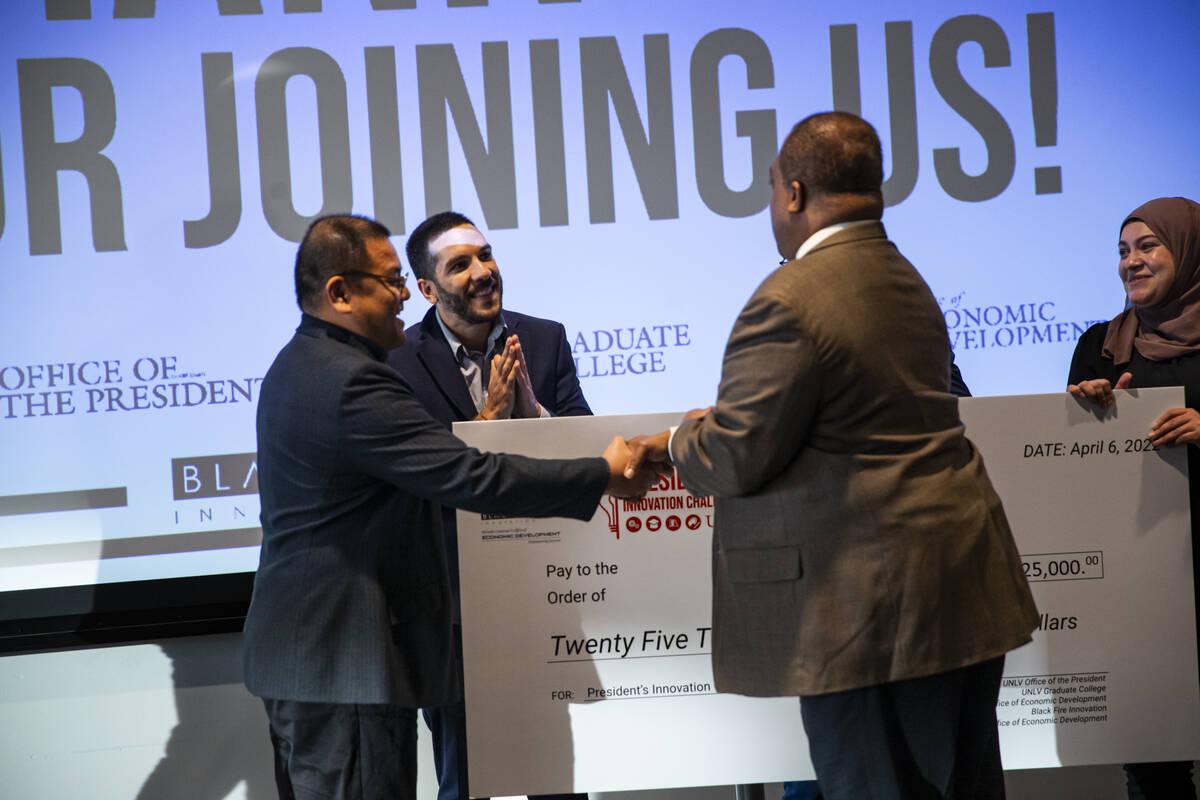 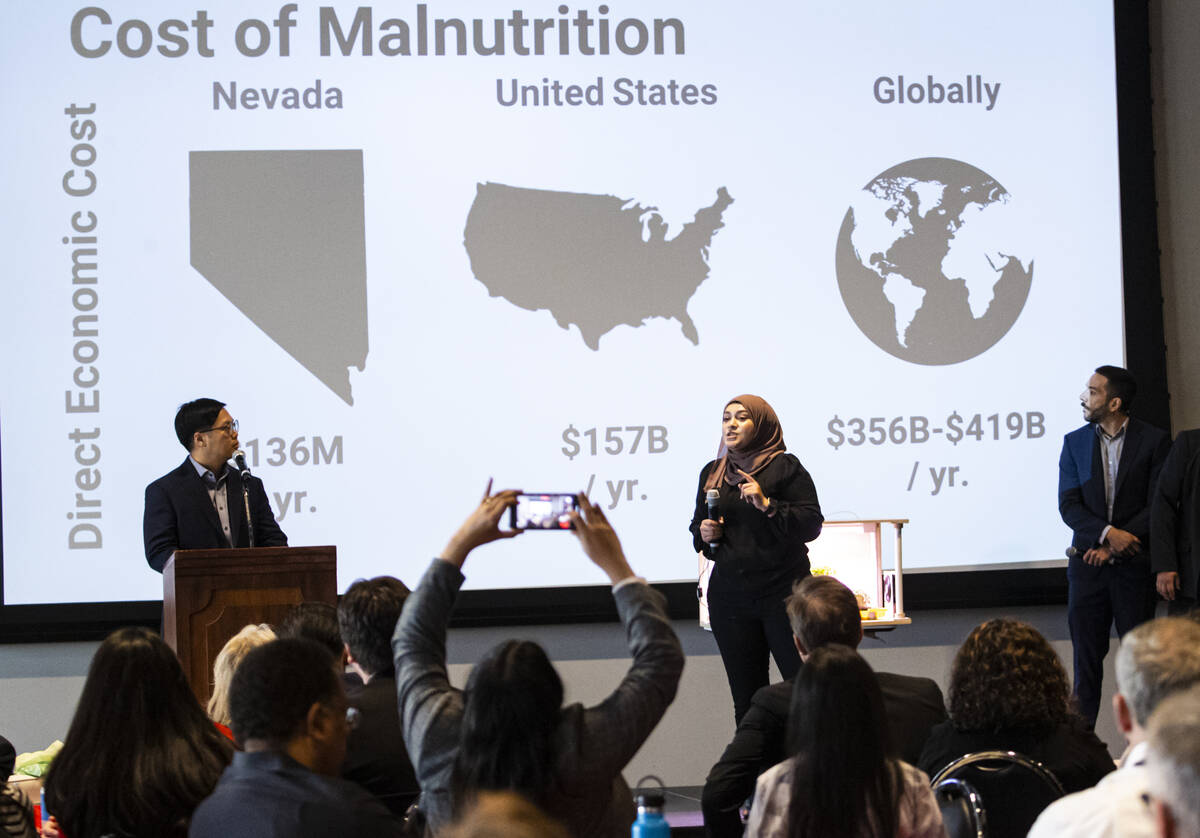 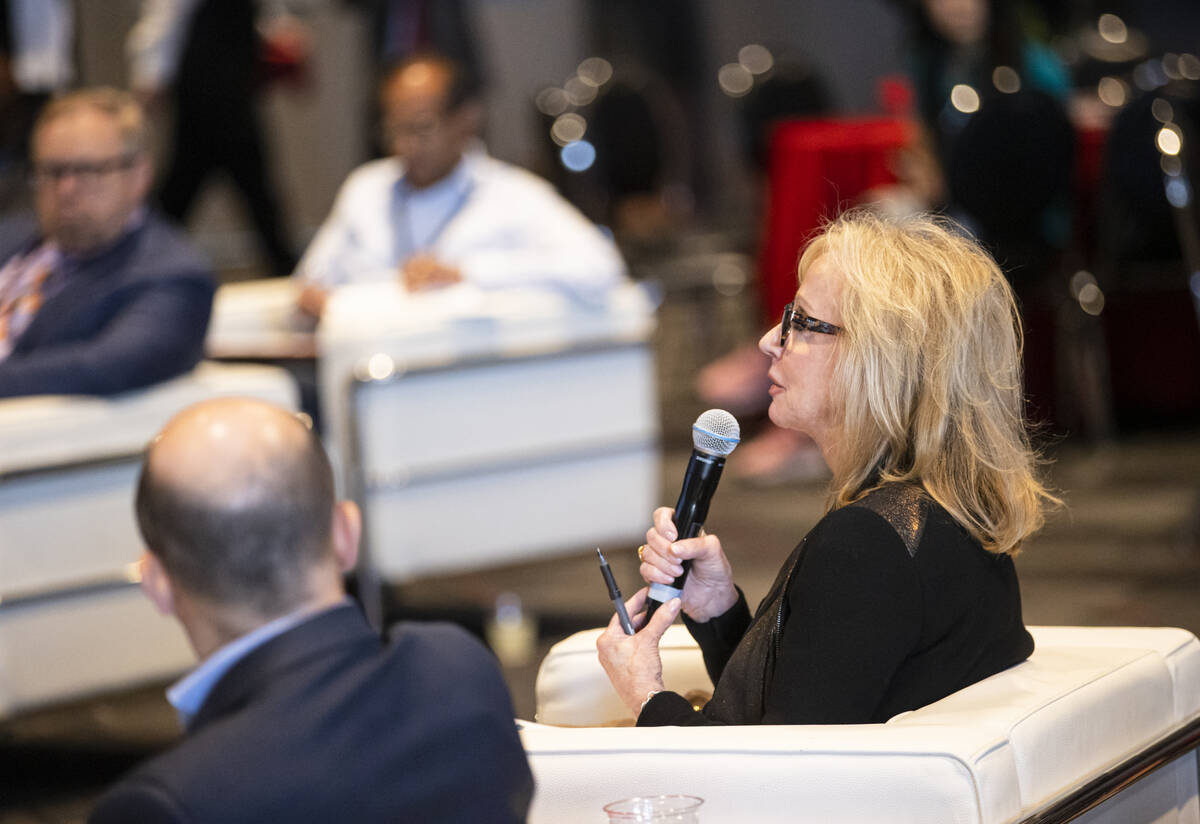 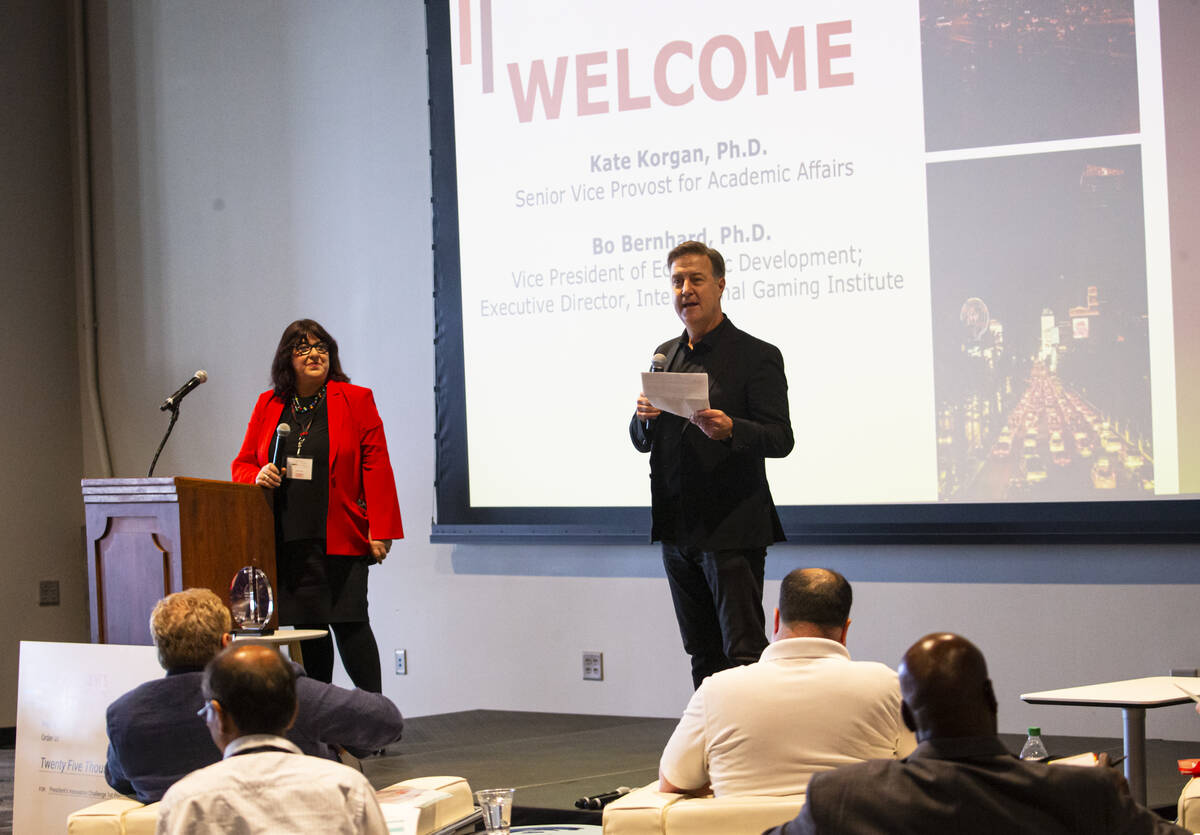 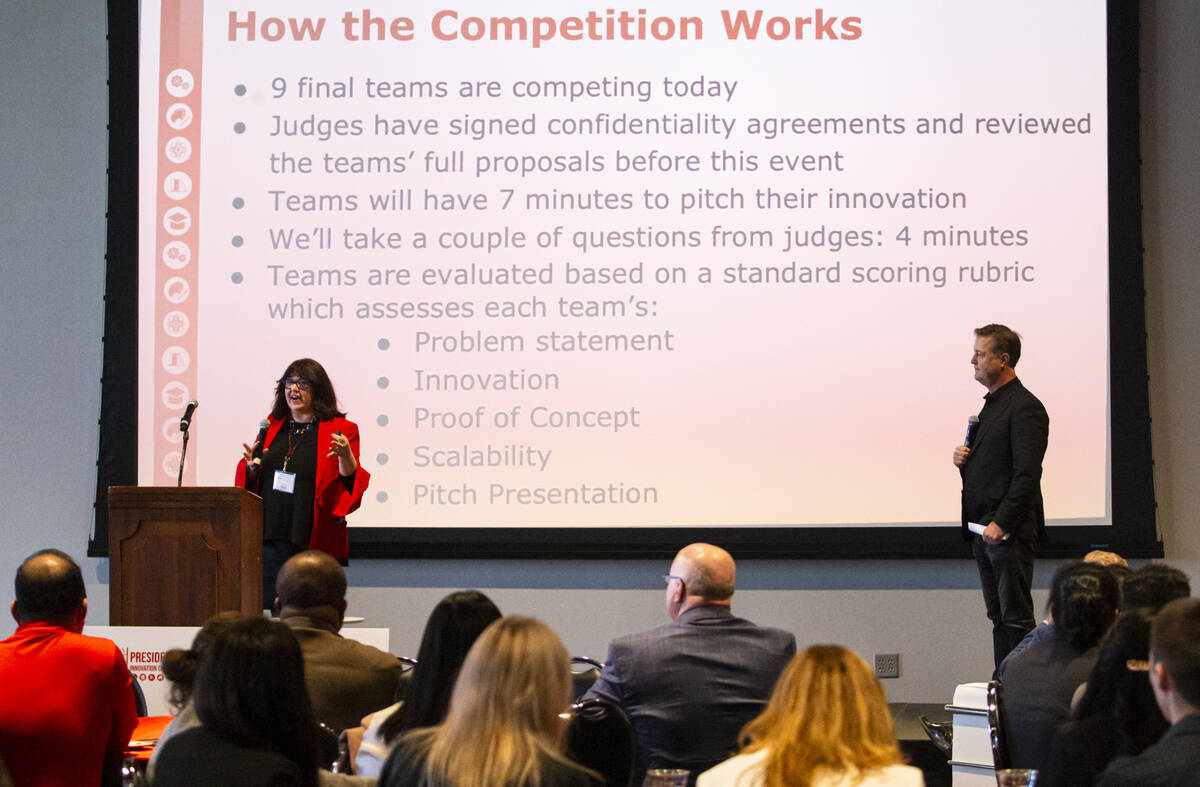 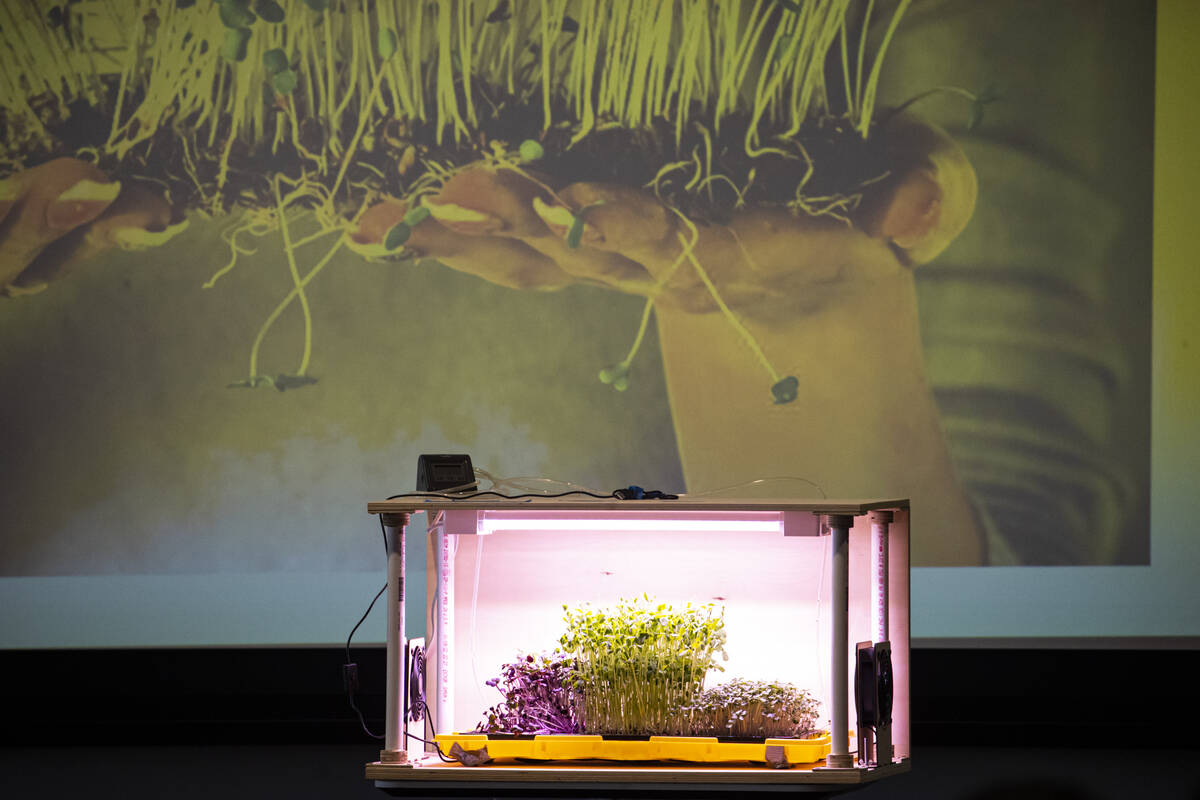 Microgreens are seen during a presentation by Esenjays for the inaugural President’s Innovation Challenge at UNLV on Wednesday, April 6, 2022, in Las Vegas. (Chase Stevens/Las Vegas Review-Journal) @csstevensphoto 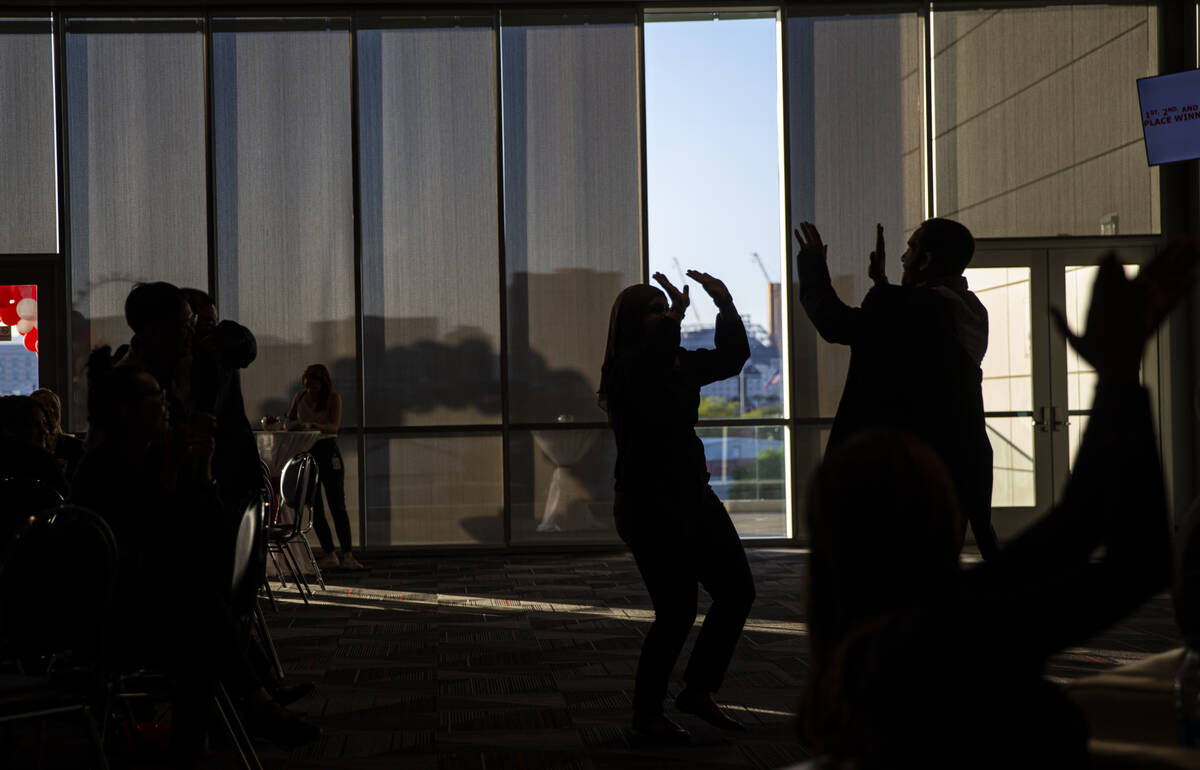 Members of Esenjays celebrate after being named first place during a presentation for the inaugural President’s Innovation Challenge at UNLV on Wednesday, April 6, 2022, in Las Vegas. (Chase Stevens/Las Vegas Review-Journal) @csstevensphoto 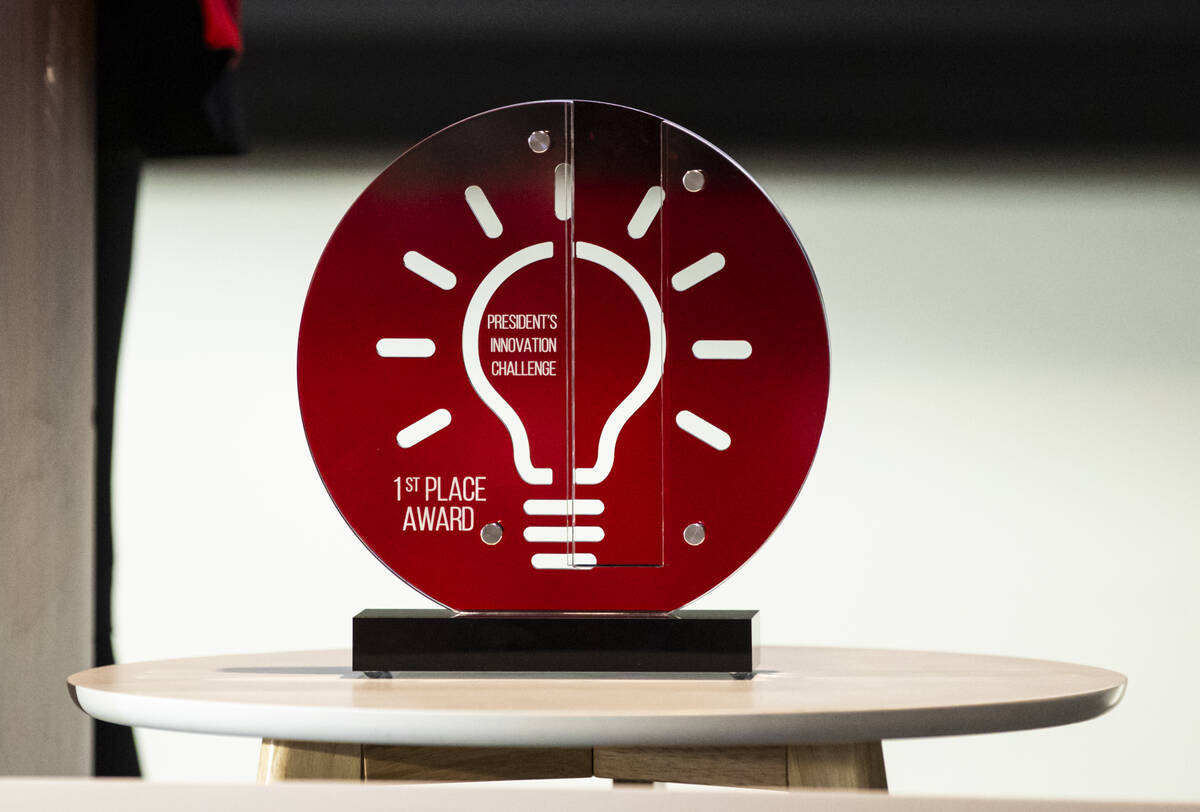 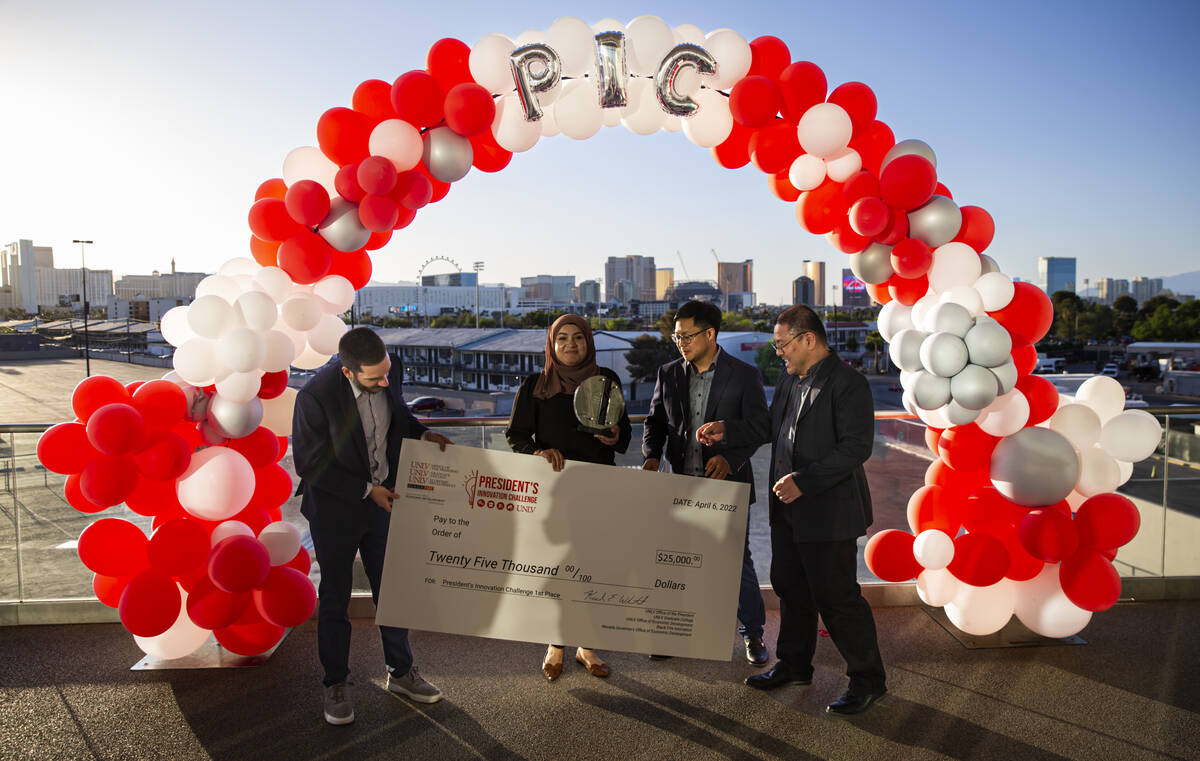 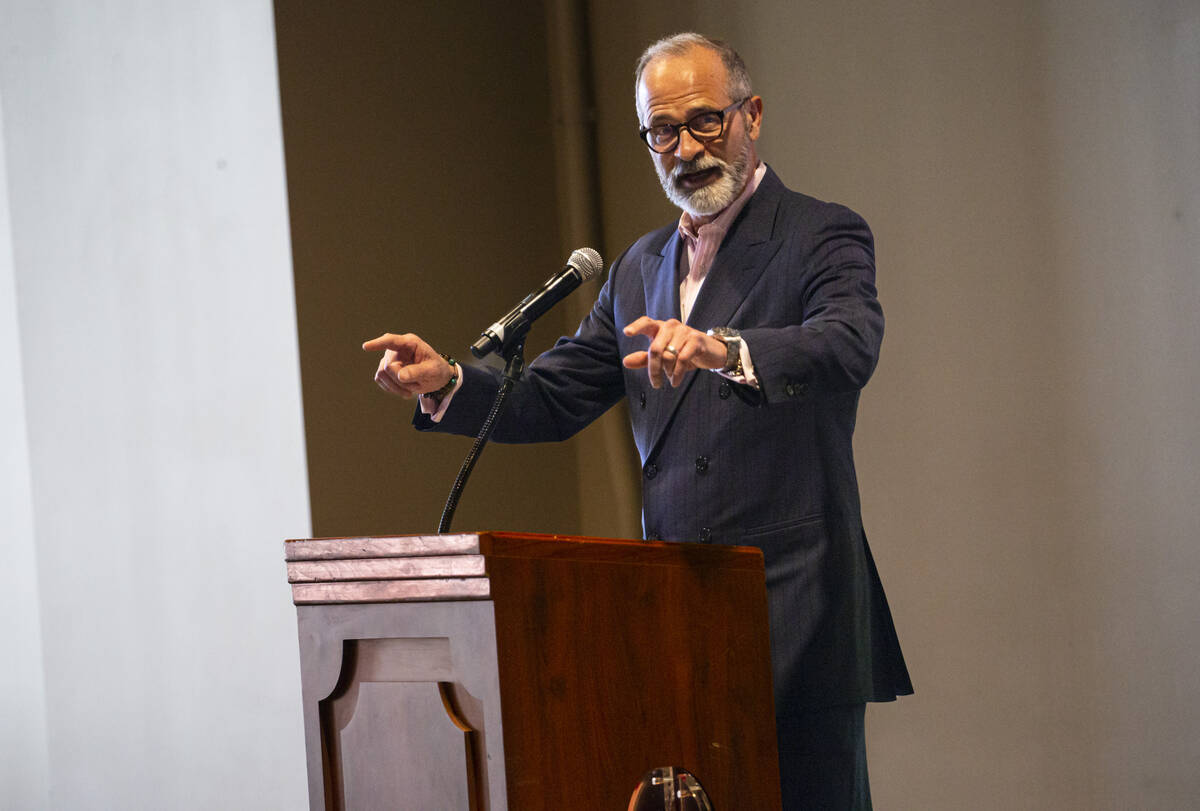 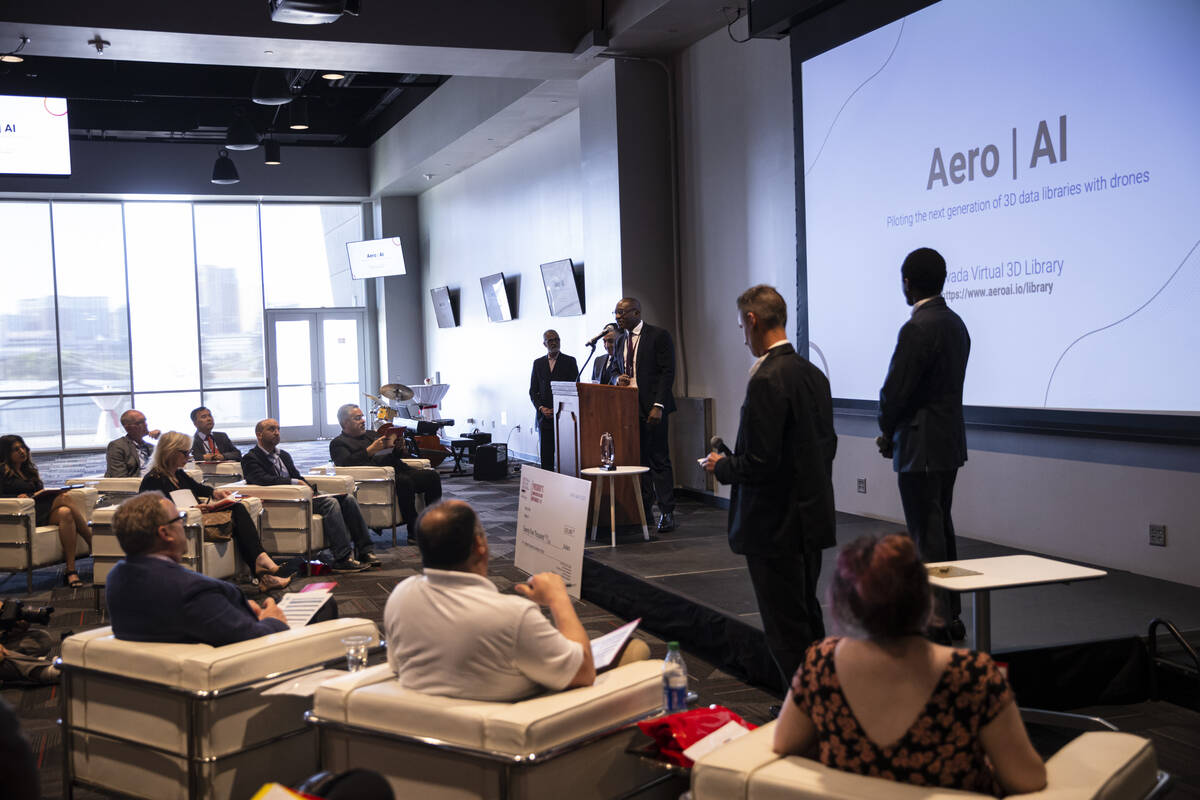 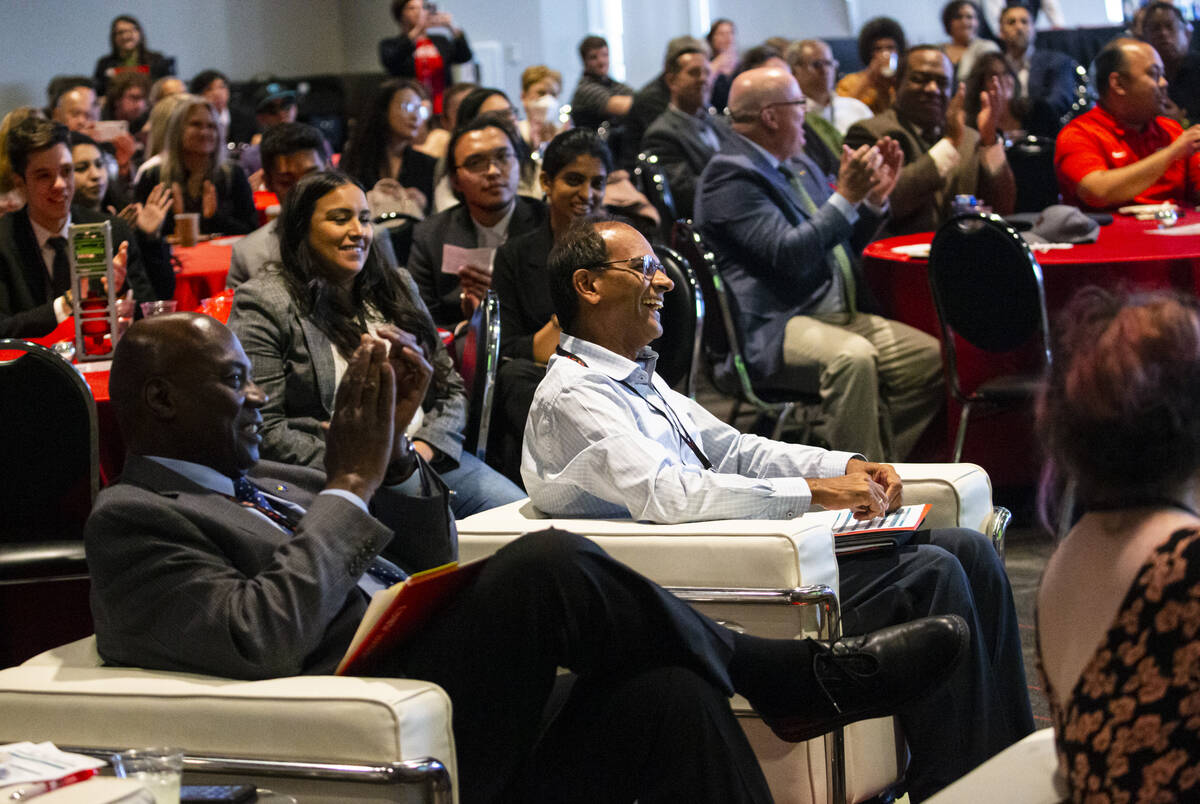 A new “Shark Tank” style entrepreneurial competition at the University of Nevada, Las Vegas, tasked nine teams of students with solving one of Nevada’s most pressing problems: economic diversity.

“Nothing too difficult,” Bo Bernhard, the university’s vice president of economic development, said during the President’s Innovation Challenge final on Wednesday. “Solve a problem that has baffled Las Vegas for 50 years.”

While 16 teams participated in a first round in the fall, the top nine presented their proposals to judges. Their ideas included promoting medical tourism, launching a cryptocurrency specific to Las Vegas, establishing a technology certification program for Title I schools and creating biodegradable single-use items to replace plastics.

In the end, the top prize went to Team Esenjay’s PYIA, a stackable, indoor microgreen growing box intended to curb malnutrition and grow vegetables sustainably. Esenjay wants to bring it into the market for both personal and business use, such as a restaurant stacking several as a marketing tool similar to the fish tanks often seen at seafood restaurants.

“It’s a way for people to grow microgreens with zero gardening experience,” said Jacob Gross, an accounting and finance undergraduate student. “They can supplement their diet with that and get the nutrition they need.”

The team — Gross and graduate students Shaimaa Abdelhaleem, G Liu and Jonathan Kim — came up with the idea as a way to address malnutrition and related diseases in Nevada, where 42.4 percent of adults are overweight. They saw the indoor farming solution as a sustainable and quick way to get nutrient-dense food into Nevadans’ diets.

PYIA can grow some microgreens in about eight days, using 94 percent less water than traditional farming methods, the team said in their pitch.

“In Vegas, you can’t even plant grass right now,” Abdelhaleem said. “But now you can plant whatever you want indoors.”

Team members praised the innovation challenge for its structure and support through the process. Mentorship, time at the university’s incubator center and requiring diverse educational backgrounds were all critical to pushing the team, Liu said.

“Without UNLV organizing it and setting it up that way, with mentors guiding us, I think we would have been less and less successful,” Liu said.

The Esenjays will use the startup funds to hire a design and engineering team to better build the PYIA box, they said.

Team “A More Sustainable World” earned second place for its plan to design and manufacture alternatives to single-use plastics, and Team “Aero AI” landed third place for its idea to create a digital library of 3-D drone data.