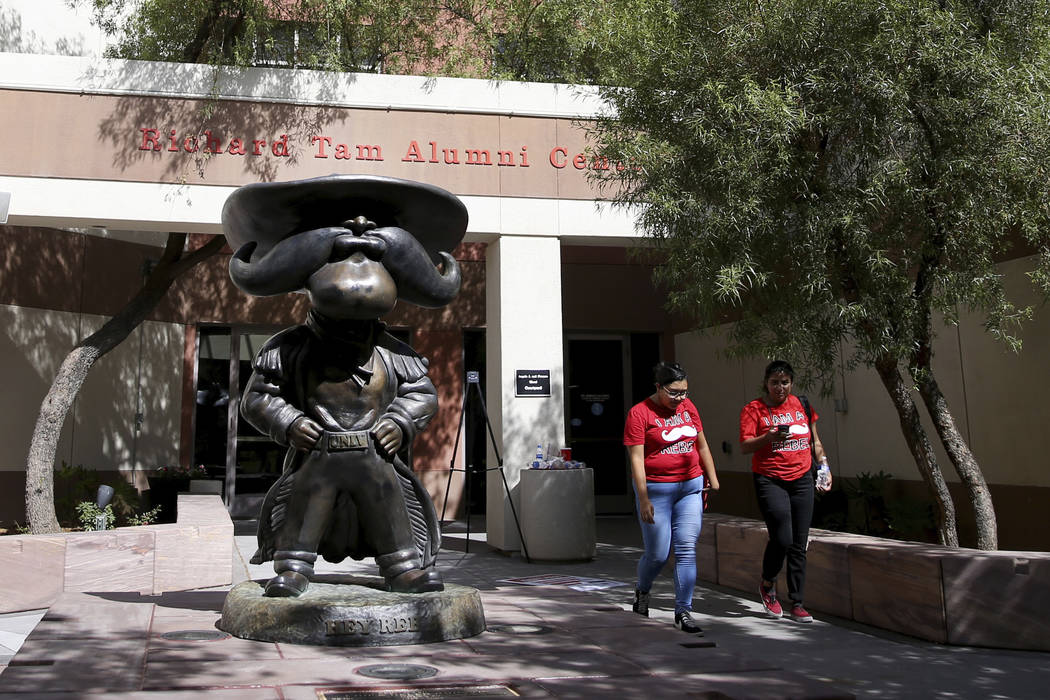 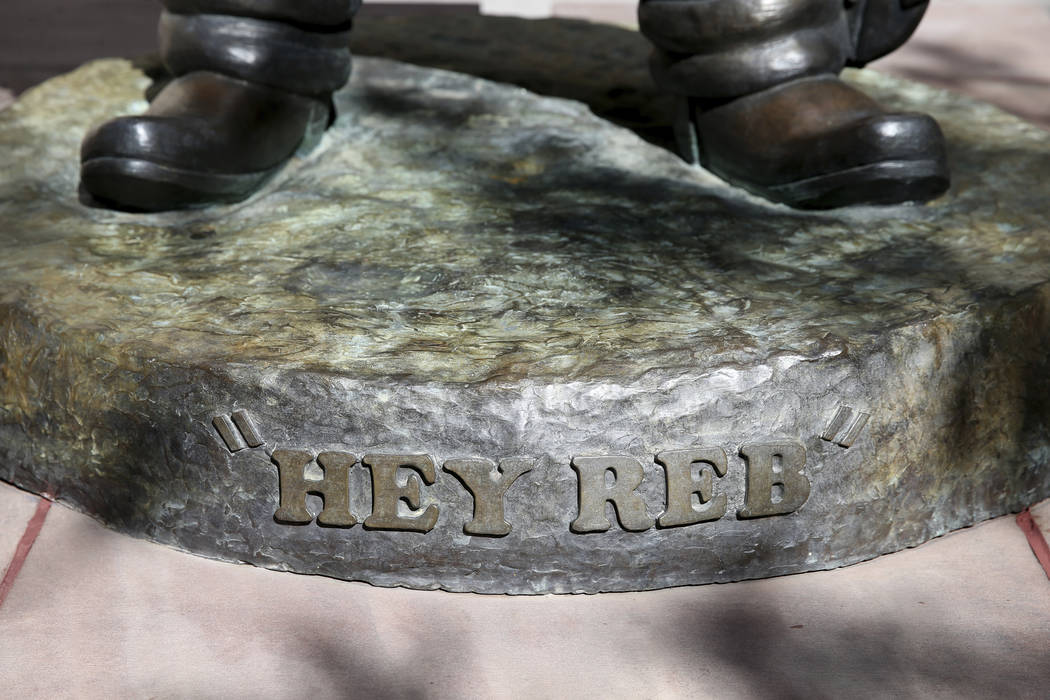 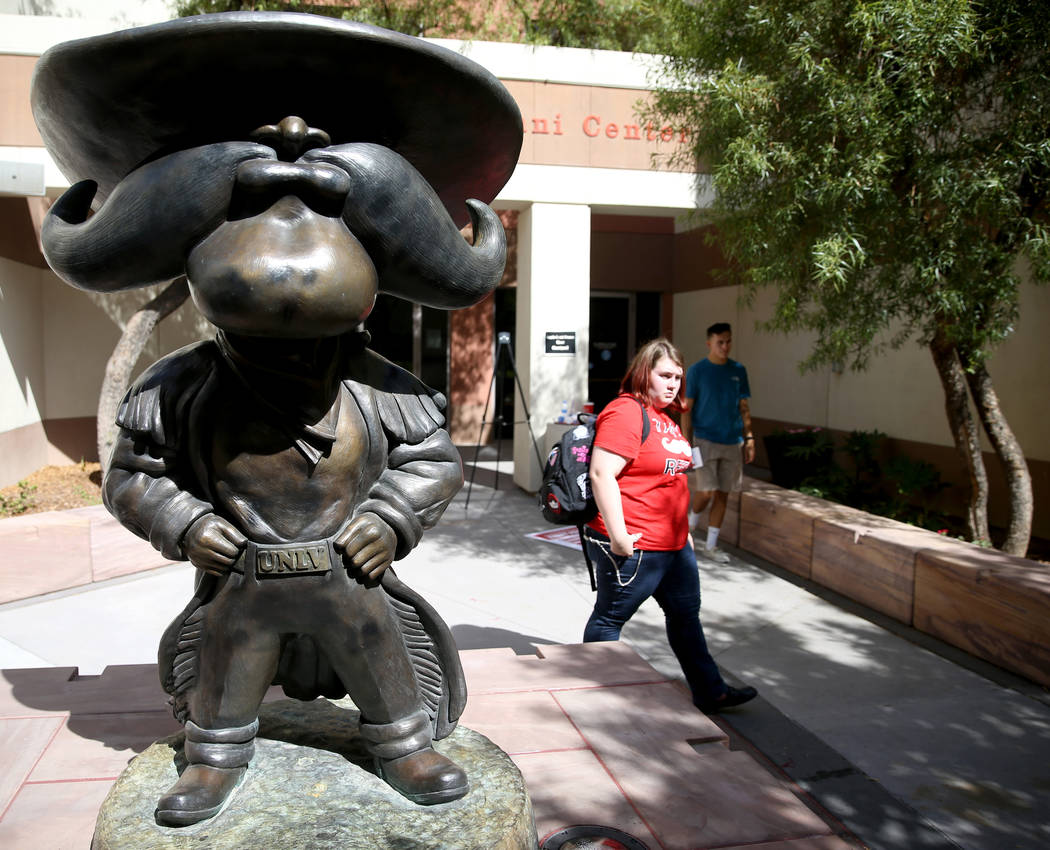 A group of Native American students at UNLV wants the university to remove the statue of its Western frontiersman mascot from campus and make other changes they say will create a more welcoming atmosphere for indigenous students and staff.

The top priority for the Native American Student Association at UNLV, according to group president Ryan Boone, is to see a Paiute language course added to the class offerings. The University of Nevada, Reno added a Northern Paiute language class this year, and Boone said he believes UNLV should follow suit with a Southern Paiute equivalent.

But Boone, a member of the Walker River Paiute tribe, said the next step would be to remove the bronze figure outside the alumni association building, whose presence creates a hostile atmosphere to Native students.

“On a campus that’s supposed to be ‘different, daring and diverse,’ we have this statue of an Indian killer,” Boone said.

He said his group has been working since the spring semester to gather support for replacing the Hey Reb! statue with one of a Southern Paiute woman, along with a plaque that recognizes UNLV stands on Paiute land. The group would also like to see an animal-based mascot, like a coyote, take the place of the Rebel mascot, which has stirred controversy at UNLV before.

University spokesman Tony Allen said he is not aware of any formal discussions between students and school officials regarding the mascot, the statue or the language program, but the Office of Diversity Initiatives would be interested in speaking to students.

Part of the purpose of the proposed changes, according to Boone, is to help all UNLV students understand the history of the land they’re standing on.

The Southern Paiute people’s ancestral land includes southern Utah and Nevada, along with northwestern Arizona and southeastern California, while the closely related — but linguistically distinct — Northern Paiutes lived throughout western Nevada, eastern California and Oregon. The tribes slowly lost their land to miners, missionaries of The Church of Jesus Christ of Latter-Day Saints and other Western settlers represented in the figure of the frontiersman.

A class at UNLV would be particularly beneficial to young Native American students whose families may have foregone speaking their native languages for fear of persecution or discrimination, Boone said.

“Language is not just words. It’s part of your history and culture,” he said. “Losing languages is like losing a part of who you are.”

The frontiersman known as Hey Reb! was meant to be a concession after a long history of controversy over the Rebels as the university mascot.

A university website dedicated to that history says UNLV students in the mid-1950s chose to call themselves the Rebels because they were, at the time, a satellite campus rebelling against the control of UNR.

Seeing their plight in the north-south struggle of the Civil War, which left 620,000 people dead, the students adopted Confederate symbology — a choice that the university website calls “unfortunate.”

The first mascot to represent the Rebels, a cartoon wolf dressed in a Confederate soldier’s uniform, drew widespread student criticism throughout the 1970s. By 1976, the student association voted to disassociate with the wolf known as Beauregard.

Still, the Rebels name stayed after a campus survey showed a majority of students preferred to keep it. A new design drawn up by a Review-Journal artist and based on a Western frontiersman was adopted in 1982. A bronze statue of the figure was donated in 2007.

“Pathfinders were severely independent people who went all around the West looking for new trails, agriculture, gold mining and everything,” artist Mike Miller said in a 2011 interview about the mascot.

Criticism over the mascot resurfaced in 2015 after the racist killing of black churchgoers in Charleston, South Carolina, with Sen. Harry Reid suggesting UNLV should consider a change to the Rebels.

The university conducted another survey to gauge student opinion. It found a majority of respondents did not find the name offensive. However, the university’s student newspaper changed its name from The Rebel Yell to The Scarlet and Gray shortly after.

Boone said that, in addition to what the Rebels’ name represents for African American students, the lingering association with the Confederacy discounts the great losses of land and population that Native nations suffered during and after the Civil War.

Boone said he acknowledges it’s unlikely the group will be able to make changes without the support of non-Native students and the community as a whole. He said the first step is to raise awareness of the issue, as well as Southern Paiute history, as students start their classes this fall.

Addie Rolnick, a professor of federal Indian law, tribal law and critical race theory at UNLV’s Boyd Law School, said the issues around the mascot are part of an ongoing campus discussion, and that the American Indian Alliance, a faculty group at UNLV, has been supportive of students’ efforts to make changes.

With new students in the Native American Student Association and a new diversity office at the university, she said it’s possible UNLV will revisit the issue, especially given recent statue removals at campuses throughout the country.

Rolnick said the university’s most recent report on this issue failed to address many of the concerns that students and staff members voiced.

“It did not reflect a full understanding of the critique,” she said. “In the minds of many people, it’s not resolved.”

Moreover, Rolnick said that in its past surveys of student opinion on the mascot, the university has asked the wrong questions. Instead of counting how many people like the mascot versus how many find it offensive, Rolnick said, a more appropriate approach would be to ask whether UNLV wants to be represented by the figure of the frontiersman and all he stands for.

She also cited a University of Washington study that showed Native American students’ perceptions of themselves suffer when reminded of the limited ways they’re seen in modern society.

“You don’t weigh a person’s desire to keep wearing a T-shirt against the university’s embrace of this terrible history,” Rolnick said. “They don’t count the same way.”