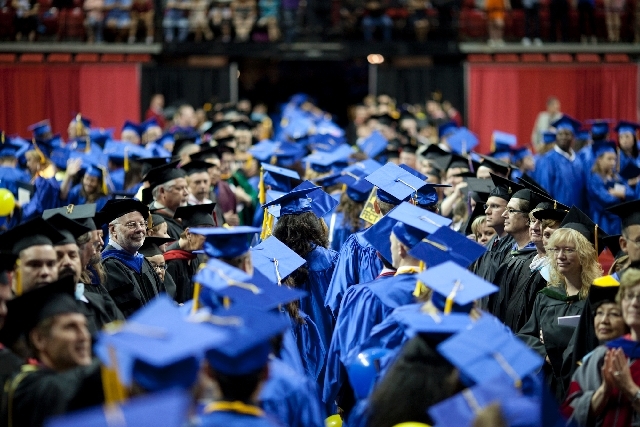 Students from the College of Southern Nevada graduate at the 2013 commencement ceremony. Nevada's community colleges are throwing out their existing framework for awarding employee raises based on education and experience and replacing it with a merit pay system next year.

Nevada’s community colleges will throw out their existing framework for awarding employee raises based on education and experience, replacing it with a merit pay system next year.

“I think this is just a matter of changes in the way colleges and higher education are run and bringing faculty at community colleges more in line with (four-year) college and university faculty,” Daniel Klaich, chancellor for the Nevada System of Higher Education, said of the new community college merit pay system.

Beginning next fiscal year — July 1, 2014 — both the community colleges and the four-year institutions will use merit pay systems for faculty and administrative faculty. State lawmakers this year approved more than $7 million in funding for merit pay.

Those are among the several changes dealing with salary taking place at the state’s higher education institutions. Also, as of July 1, a 2.5 percent pay cut for all state employees was reversed at a cost of $50 million. A 2.3 percent reduction in the form of six furlough days, which are unpaid days off, remains in effect.

Additionally, some higher education faculty members at Great Basin College saw a salary increase on July 1. The college spent $469,191 on salary and benefits adjustments for compression and equity issues. That was because the state’s Board of Regents’ last year approved new salary schedules. Some of the changes under the new schedules were to bring faculty below the minimum salary level up to the minimum standard.

As colleges work to address those changes, they are also busy with the changes in merit pay.

“Merit hasn’t been awarded for five years,” said Neal Smatresk, president at the University of Nevada, Las Vegas. “Because of that, of course, there’s a lot of questions.”

Gregory Brown, vice provost for policy, faculty and institutional research at UNLV, said officials are in the early stages of discussion about merit pay, and the conversation will intensify this fall when most faculty members return.

“We are having this discussion because of the unique situation of restoring merit pay while a furlough (reduction) is still in effect,” he said.

Merit awards will not be a substitute for ending furloughs, Smatresk explained.

UNLV has until January to come up with a plan for merit pay raises next summer.

The community colleges are having to start from scratch in developing merit pay systems and determining how officials will measure performance.

Merit pay systems that the four-year institutions have used in the past have been effective and it wouldn’t hurt for the community colleges to use those as guidance, Klaich said.

“But I think we want to let them figure out what works best for them,” he continued. “They have time and I think they should be able to do that.”

Officials at the College of Southern Nevada are working with a consultant to help them with the process.

“We are at the very embryo stages,” he said.

For next fiscal year, each institution will get funding for merit pay. The Legislature this year approved more than $7 million for 2014-15, and that money will be distributed among the state’s seven higher education institutions next fiscal year. UNLV will receive the most, $2.9 million, and Nevada State College will receive the least, at $126,692, according to figures from the Nevada System of Higher Education.