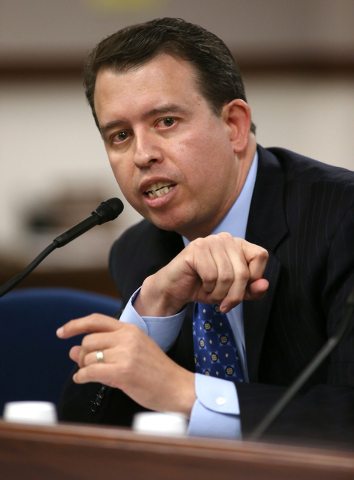 Superintendent Pedro Martinez, with the Nevada Department of Education, testifies in a committee at the Legislative Building in Carson City, Nev., on Friday, March 27, 2015. Lawmakers are considering a bill that would allow the state to take over underperforming schools as part of an overall effort to improve public education. (Cathleen Allison/Las Vegas Review-Journal)

CARSON CITY — A bill that would authorize the state Department of Education to take over underperforming schools was described Friday as a measure of last resort for institutions that have been unable to make progress in student achievement after years of effort.

“I wish we would never take a single school into the Achievement School District,” said Dale Erquiaga, state superintendent of public instruction. “But as the governor says, we have to draw a line in the sand. This bill is that line.”

Erquiaga testified for Assembly Bill 448, one of several measures being pushed by Gov. Brian Sandoval in his proposed 2015-17 budget to improve student achievement. The bill was being heard by the Assembly Education Committee, which took no action on it Friday.

The bill would require the State Board of Education to identify and list public schools that demonstrate unsatisfactory student achievement for potential conversion to an achievement charter school. The executive director of the Achievement School District, who would be appointed by Erquiaga, would select schools from the list for conversion.

The schools would be operated without any collective bargaining rules for teachers or administrators.

Former Washoe County schools Superintendent Pedro Martinez, who has been recruited by Sandoval to help with the initiative as a superintendent in residence with the Nevada Department of Education, said the bill isn’t about a state takeover of a school as it is to ensure that the right policies and right environment exists so that school personnel make the right decisions to help students succeed.

“More importantly, it is about promoting the right behavior so these schools get off the list once and for all,” he said.

Children in these failing schools are not being given a chance to escape poverty, Martinez said.

Education Committee Chairwoman Melissa Woodbury, R-Las Vegas, who is an elementary school teacher, said the bill would create a mechanism to provide a better focus on struggling schools.

“If certain public schools are constantly underperforming and not showing improvement, then something must be done to help those communities,” she said.

The schools would be overseen by charter school management organizations that the state Education Department will have to recruit to Nevada.

Nicole Rourke, representing the Clark County School District, said the district has numerous questions about the measure, including how to ensure that teachers and staff are treated fairly.

“Movement of schools to the ASD must be done thoughtfully and with a great deal of care,” she said in her written testimony.

The district is not opposed to such a district, Rourke said.

“We believe it’s not enough to be bold, we must also be thoughtful,” she said. “We need to protect taxpayer resources. We need to ensure our students are considered first and foremost in every decision.”