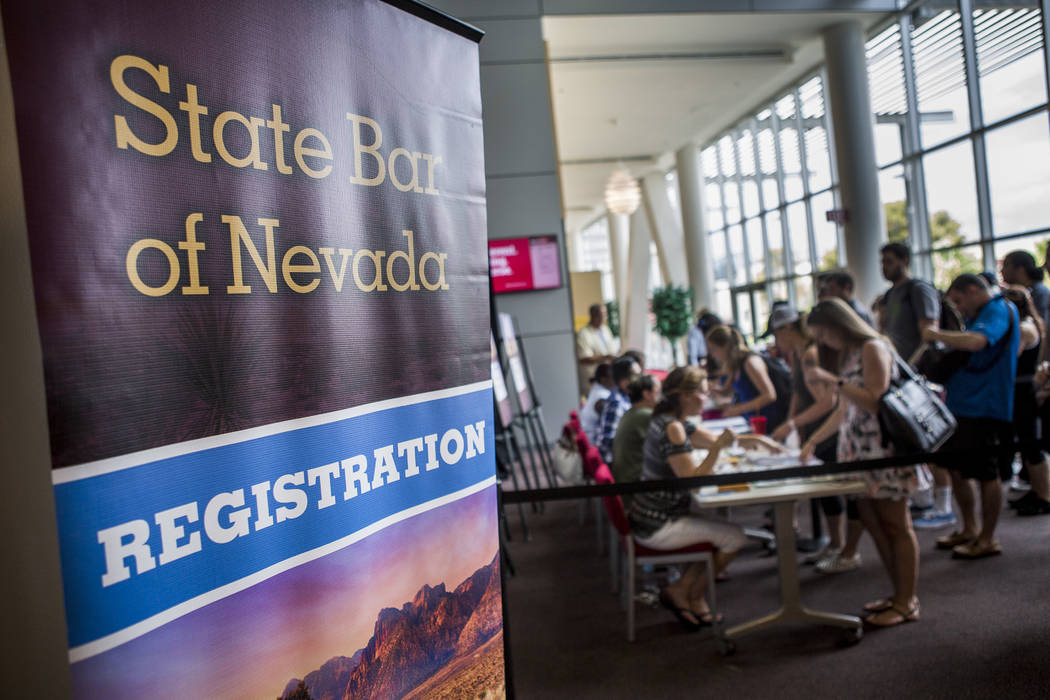 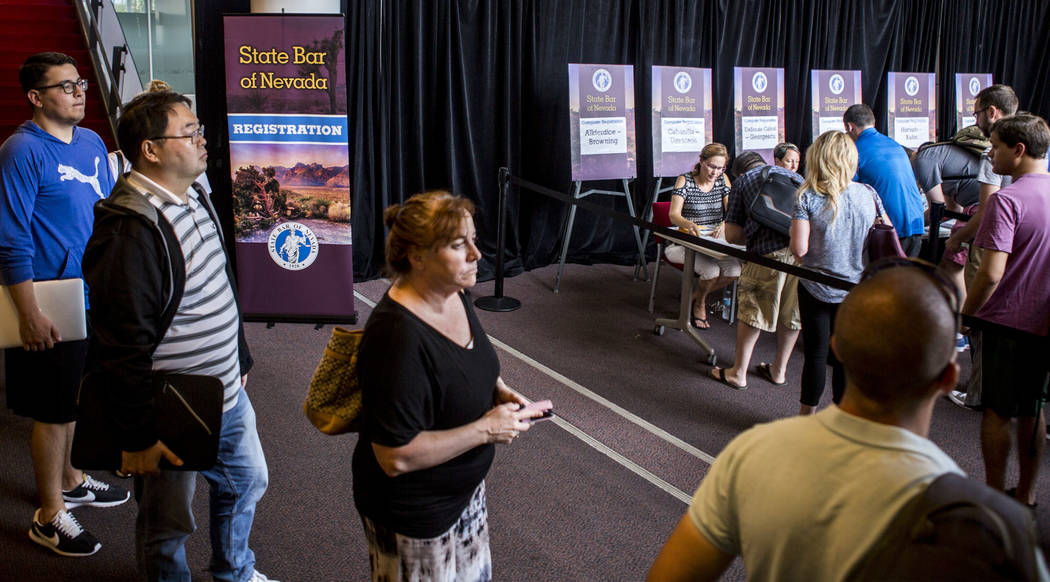 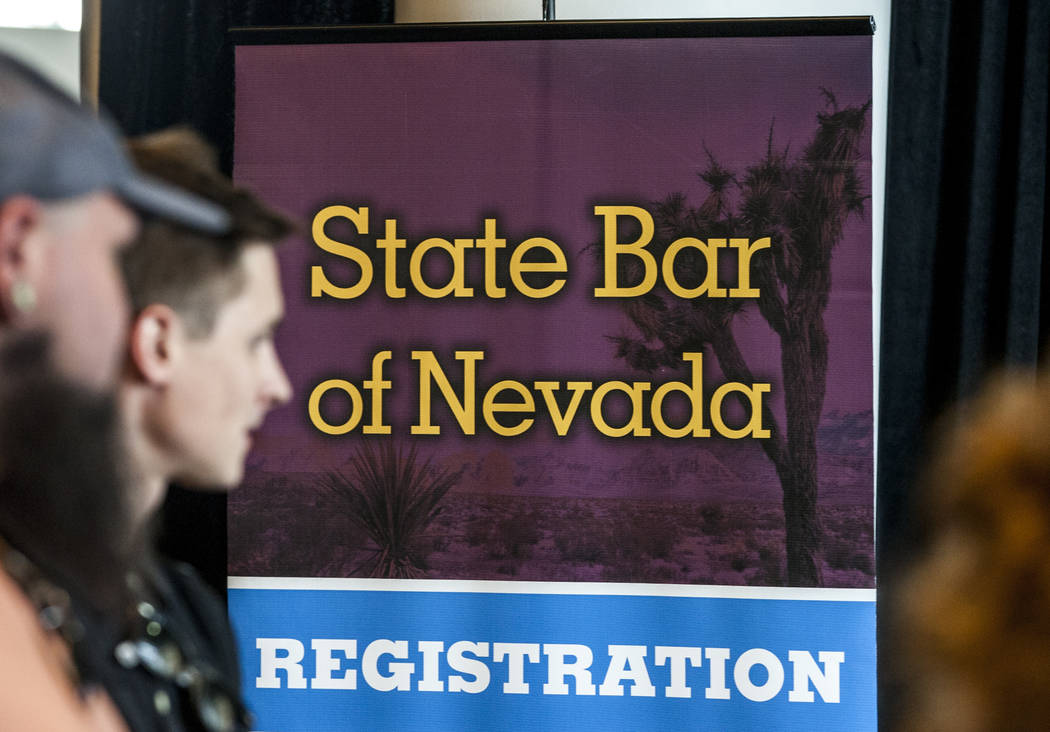 People wait in line to register for the Nevada bar exam in the Student Union at UNLV on Monday, July 24, 2017. Patrick Connolly Las Vegas Review-Journal @PConnPie 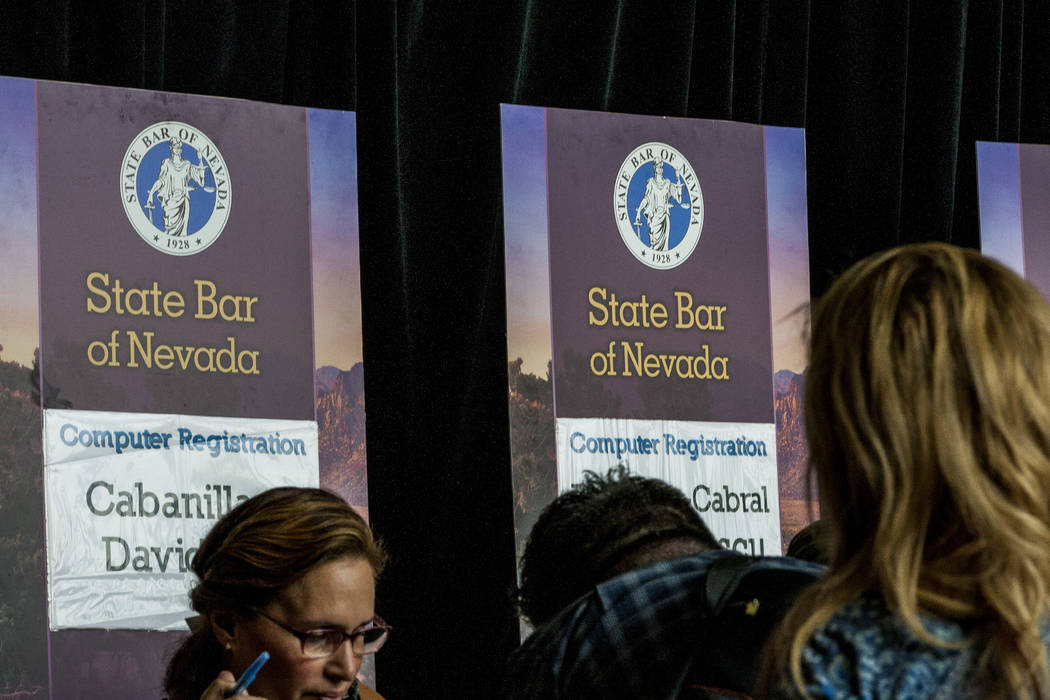 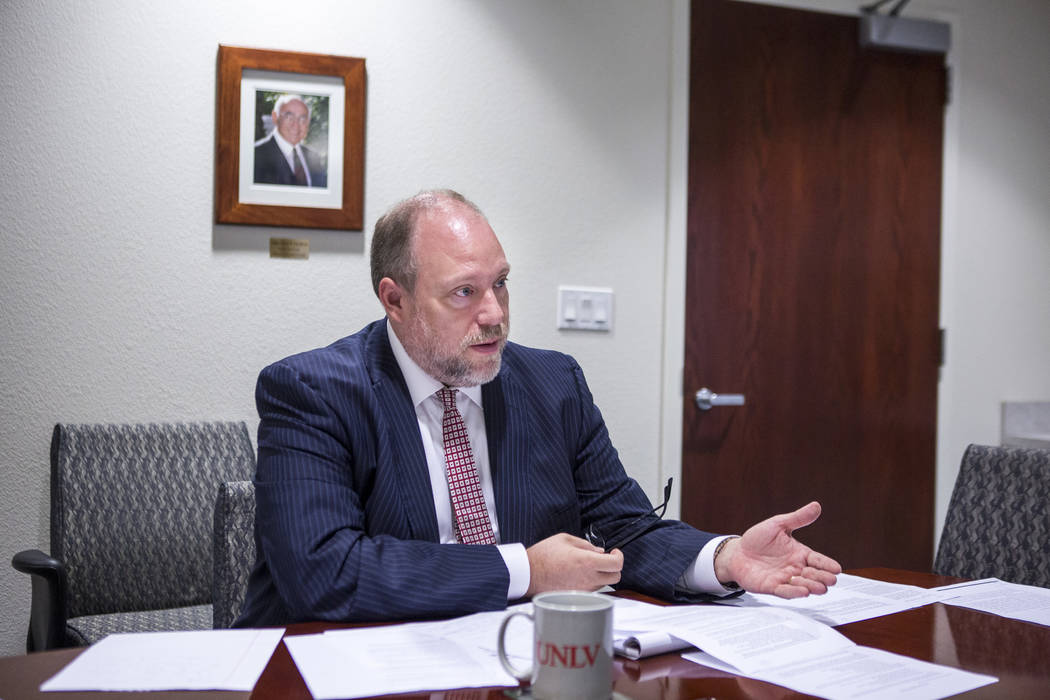 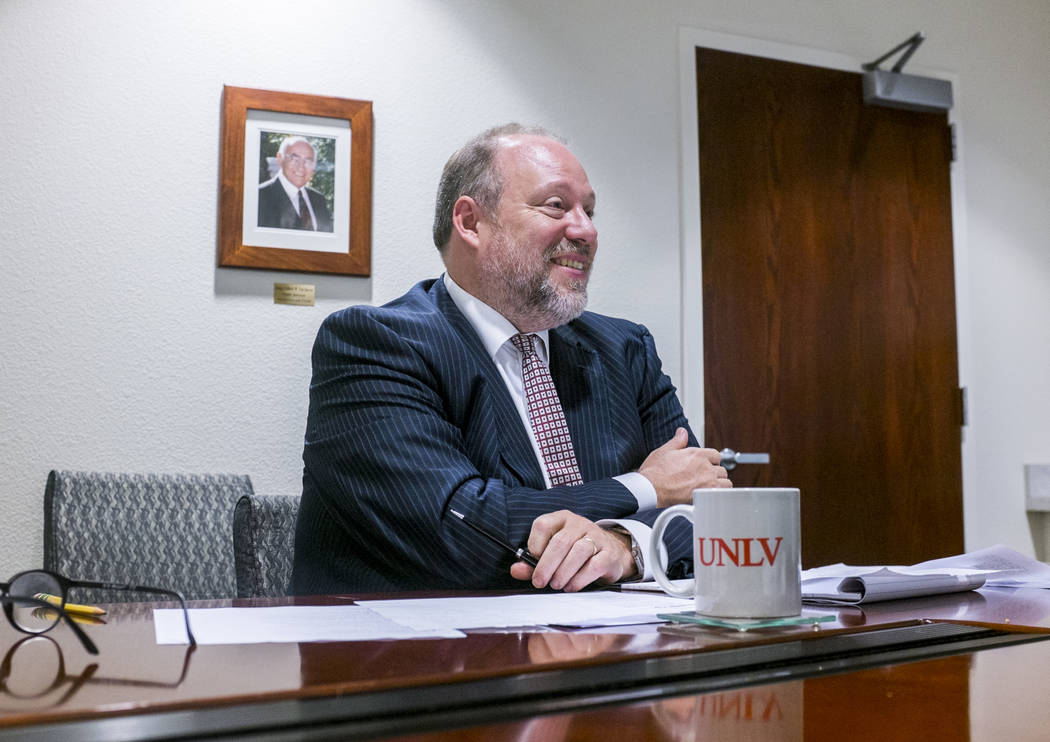 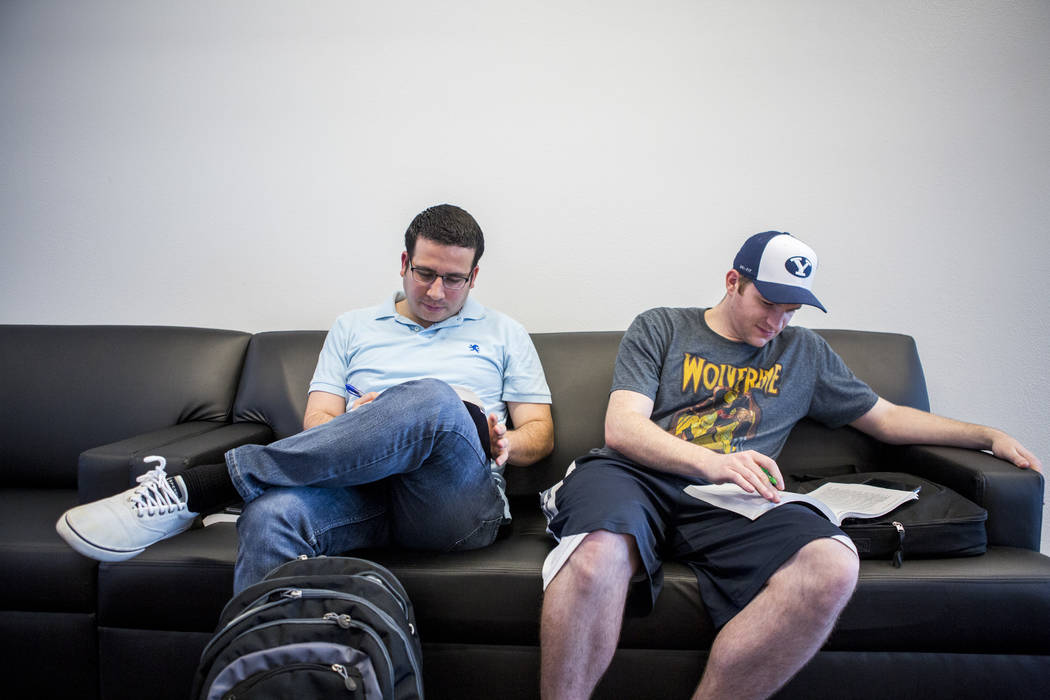 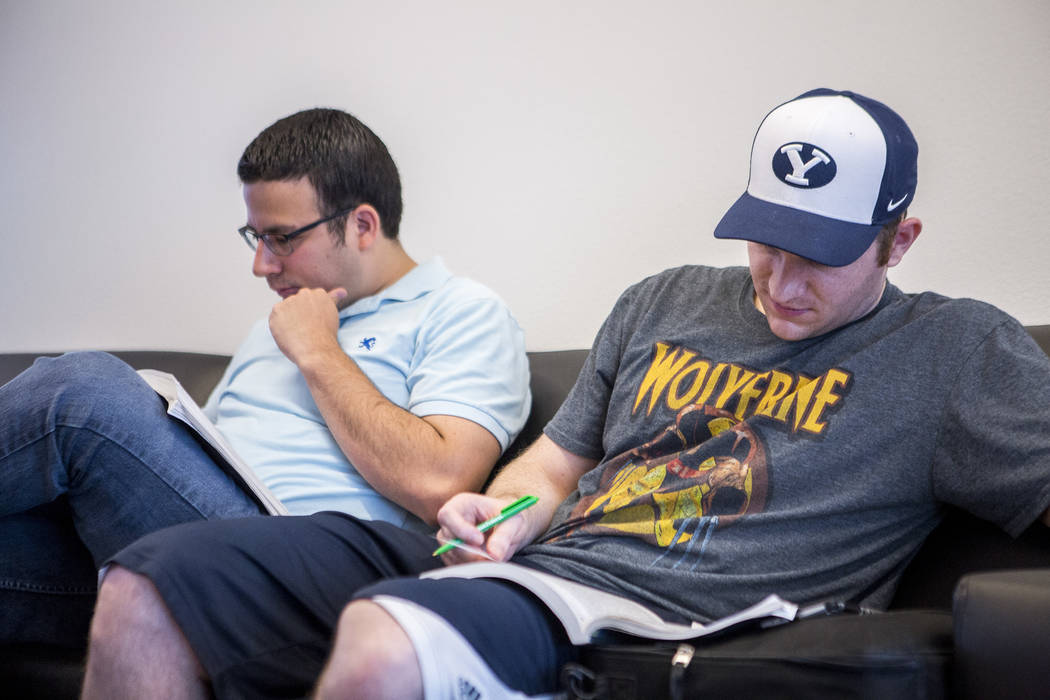 The Nevada bar exam is notoriously one of the most difficult tests in the nation for aspiring lawyers, but that reputation could soon be dismissed as state officials tinker with the test to make it easier.

The first changes occurred about a month ago, when the Nevada Supreme Court lowered the score required to pass. The court, which has the final say in matters related to the state bar exam, also recently approved a recommendation to remove an essay topic that it deemed no longer relevant.

The moves comes as fewer law school graduates — in Nevada and across the country — are passing the bar exam.

Law school leaders and state officials are short on explanations. 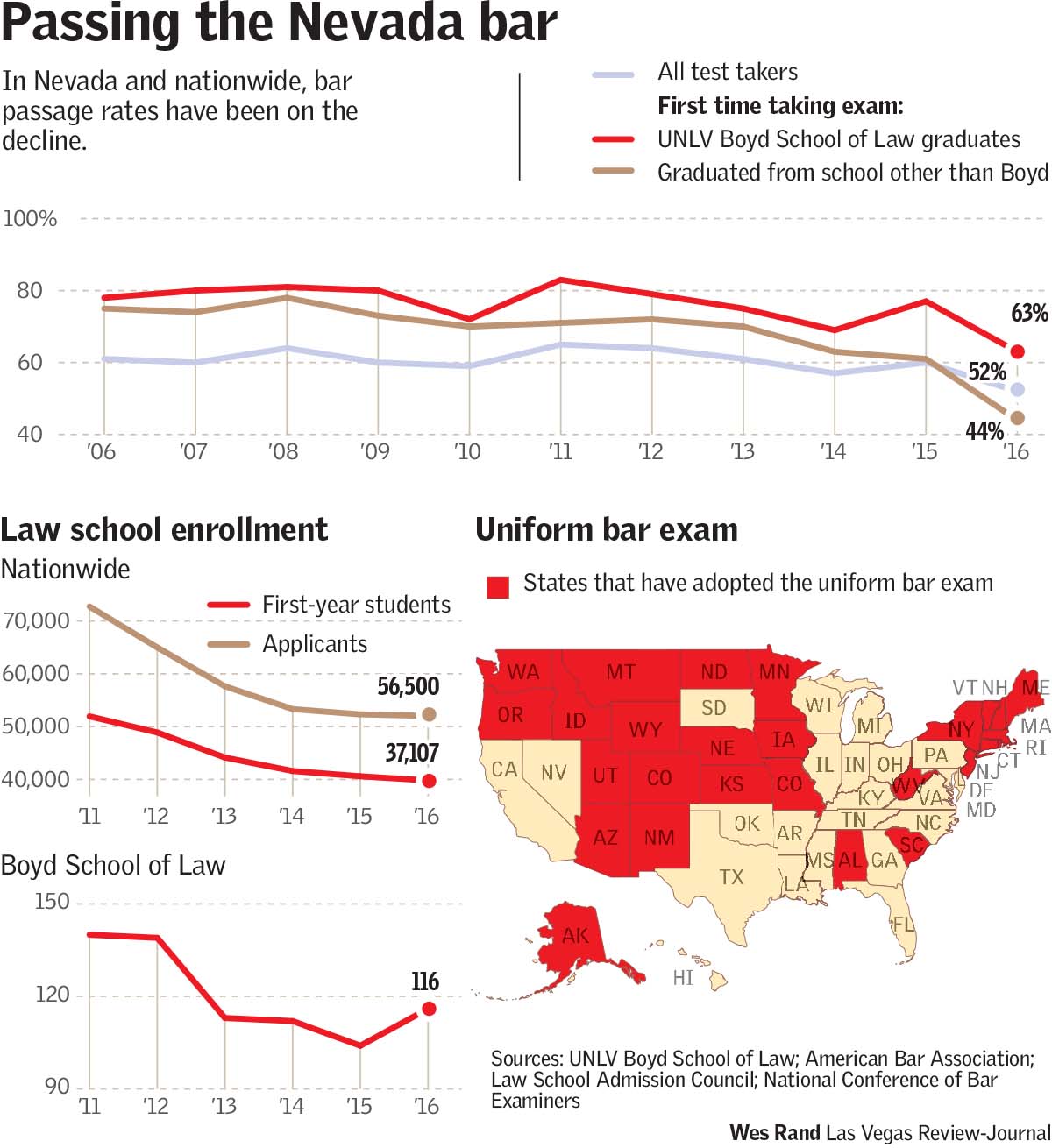 Changes also must balance the need to protect the public with ensuring there are enough lawyers to meet demand.

“Our focus is protecting the public from unqualified practitioners,” Trachok said. “The question becomes, from our perspective, how do you define that? Where is that line drawn?”

Some students who took the Nevada bar exam last week applauded moves to make it more relevant and less daunting.

Shea Billadeau, who began preparing for the exam in April after graduating from Brigham Young University, was delighted to learn he wouldn’t face an essay question about “commercial paper,” the topic that the Supreme Court eliminated.

“It’s not super common,” Billadeau said on Monday, the day before the exam. “It’s based on very old law of people passing checks back and forth. It’s very strange.”

Billadeau and Jorge Alvarez, also a graduate of BYU, said they were familiar with Nevada’s reputation for a tough bar exam.

“I think I’m feeling nervous because of that,” Alvarez said. “If I was taking the bar in Utah, I would feel more comfortable.”

Efforts to make the Nevada bar exam more user-friendly began with the decision in June to lower the “cut score,” the figure required to pass the multistate bar exam, from 140 to 138. That was the result of a regular re-examination of the exam by the Board of Bar Examiners and the Supreme Court, Trachok said.

Every state, except Louisiana, includes the multistate bar exam — a six-hour, 200-question, multiple-choice ordeal — in its test, but each sets its own cut score. In New York, for example, the cut score is only 133. “The cut score everywhere, nationwide, needs to be continually examined, as does the content of the test, to make sure it’s still serving its mission,” said Dan Hamilton, dean of the Boyd School of Law.

Each state also weights this portion of the exam differently. For some states, it makes up 50 percent of a student’s overall score; in Nevada, it’s one-third.

The Silver State places more emphasis on eight, one-hour-long essay responses. That’s more than is required by a different exam catching on in many states, known as the uniform bar exam. It requires students to write six, 30-minute essays.

So far, 26 states have adopted the uniform test, including all western states except California and Nevada, and others are on the verge of adopting it, said Erica Moeser, president of the National Conference of Bar Examiners.

The uniform bar exam offers some advantages, according to advocates.

“The score you earn can be taken to another state,” Moeser said. “Where that really advances new lawyers is that it gets them far more opportunities to look for employment in other states.”

Trachok, however, says adopting it would require the state to surrender authority. “As it is now, the state and the Supreme Court (have) full control,” Trachok said. “We know the qualifications of our examiners. To turn this over to a national organization, and give up this control, is a mistake.”

There’s also debate over whether to begin granting reciprocity in Nevada, Trachok said, which would allow lawyers from other jurisdictions to practice in the state without passing the state bar exam.

Alex Leveque, an attorney who focuses in trust and estate litigation at Solomon Dwiggins and Freer Ltd., opposes that idea.

“It’s good that our bar passage is difficult,” he said. “It maintains a higher standard of lawyer.”

Nevada’s legal community may take a cue from California on whether to further lower the bar.

Hamilton, the Boyd Law School dean, said he is eagerly awaiting results of a study that California is conducting, which includes a review of state bar exam content and cut scores and an overall examination of the falling passage rates.

A shortage of lawyers?

One factor arguing for a less rigorous exam, according to Kellye Testy, president and CEO of the Law School Admission Council, is that some states are predicting lawyer shortages, particularly in rural areas, as baby boomer attorneys retire.

The former dean for the University of Washington School of Law in Seattle said the problem already is evident there, as there is an abundance of lawyers in the city but few or none in some smaller towns in eastern Washington.

While attracting talent to rural areas has always been a problem, it’s magnified as fewer students choose to study law, Testy said.

“Careers in entrepreneurship, science, technology could be drowning out the message that we also need really bright people to go be lawyers, too,” Testy said. “Law is what sets the very basic structure for society and democracy to flourish.”