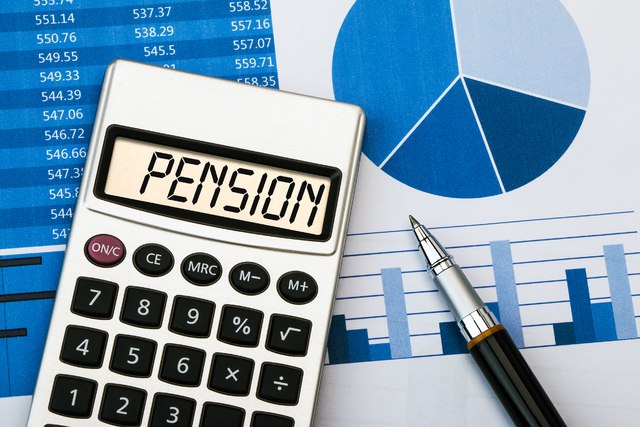 Jennifer Phillips has seen her salary from the Clark County School District decrease three times over the past few years.

That’s not because of a demotion. It’s because Phillips, an accounts payable employee, is paying a higher contribution to the Public Employee Retirement System, the pension fund for Nevada’s public employees.

She doesn’t seem to mind the payment setup, in which the district reduces employee pay to compensate for the employee’s share of the pension contribution.

But a new study argues that increasing pension costs are eating up education funding for students.

Nevada is one of only eight states that experienced both declining per-pupil expenditures and growing pension contributions, according to the study from the conservative Manhattan Institute think tank.

“Teachers are feeling the effects of more and more of the state education budget having to go toward these legacy benefits, promises, instead of in today’s classroom,” said study author Josh McGee.

The complex public pension system is one that’s sparked much debate, both locally and nationally.

In Nevada, the pension contribution rate for regular public employees — including teachers, but excluding firefighters and police, who have a separate fund — is currently set by an actuary at 28 percent of entire payroll.

Teachers typically fall under a contribution plan in which the school district pays the entire contribution up front. In return, they might not receive a salary increase or may see a salary reduction from one year to the next.

The contribution rate is the estimated amount required to fund current benefits and pay off a portion of benefits accruing in the future, known as an unfunded liability.

The rate is higher than the previous 25.75 percent rate — and while pension costs have risen, money spent on other educational costs have declined, the study concludes.

From 2000 to 2013, total education expenditures in Nevada declined 13 percent, according to the study. Meanwhile, the necessary contribution grew by $380 per pupil.

That contrast may change, though, as Gov. Brian Sandoval’s extensive 2015 education efforts will pump over $100 million to schools.

Like other public pension systems, Nevada also has an unfunded liability — the money needed to pay all future accrued benefits for current employees and retirees. The goal is to store away enough money to cover the entire fund.

That liability rested at roughly $10 billion by June of last year, according to the fund’s executive officer, Tina Leiss.

Pension critics call that liability a “debt,” arguing that today’s teachers are taking more out of their earnings to pay for the accrued money that’s already been promised for outgoing retirees.

“Current teachers are making less, their salaries are rising at a slower clip, benefits have been cut,” McGee said. “One of the reasons is that more money is having to be devoted to legacy benefits.”

Yet pension officials compare the liability more to a mortgage that one will eventually pay down.

Leiss argued that the state’s pension system has a good, responsible funding policy in place.

She declined to comment on the numbers in the study, noting also that the state pension system includes a range of other professions aside from teachers.

“I know that sometimes the increased contributions can be painful,” Leiss said. “But it’s because we’re dedicated to making sure we have the money on hand to fund those benefits, and those are legally required to be paid.”

Contribution rates have risen due to a number of factors, she said, including the Great Recession that impacted investment markets. Nevada’s teacher shortage could also play a role in rates.

Another factor is payroll growth, as contributions are conducted based on a percentage of the entire payroll amount. Payroll growth has been flat or negative since about 2008, Leiss said.

“It’s always been proven in Nevada that we have a strong defined benefit system that, for educators who are staying in the system, is a good long-term retirement plan,” he said.

Yet rising pension contributions still present a challenge for public employees and legislators who want to reform the system.

In contract negotiations with the Clark County School District, the Education Support Employees Association has been bargaining to find a way to offset the pension contribution that its members must pay.

At the state level, state legislators have tried to reform the pension system — introducing bills to either raise the retirement age or new plans that would lower taxpayer liability for the fund.