If you are having problems accessing today’s e-Edition, please click on this link VIEW E-EDITION
By Natalie Bruzda Las Vegas Review-Journal
May 18, 2017 - 4:34 pm 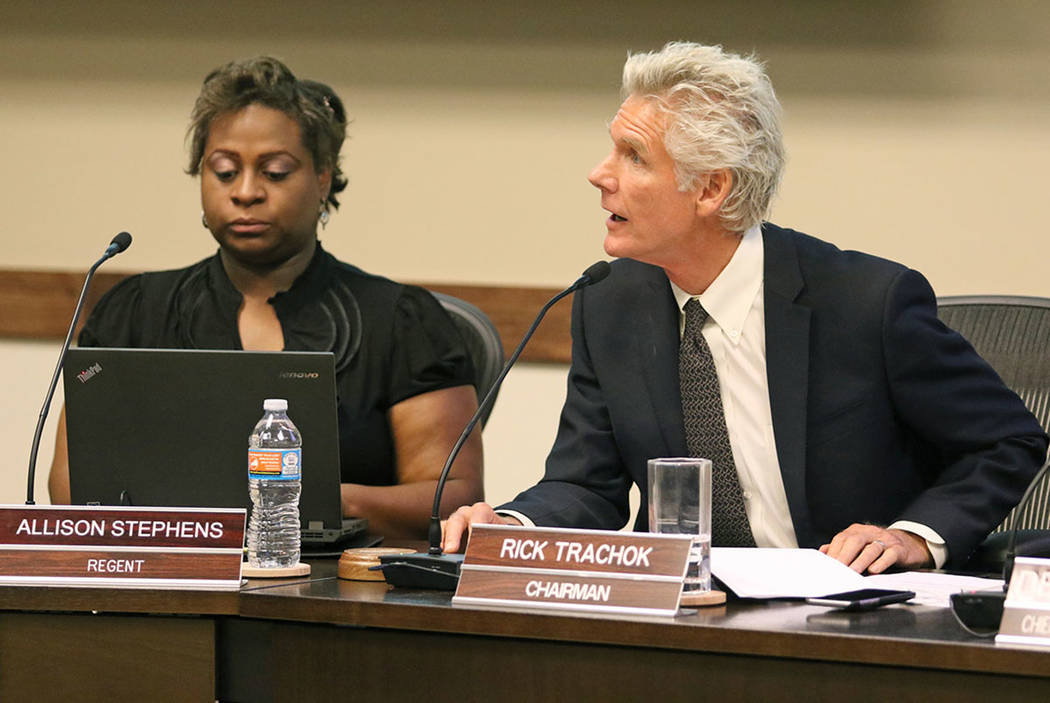 Rick Trachok, chairman of Board of Regents, leads a Nevada System of Higher Education meeting in 2016 in Las Vegas. Regent Allison Stephens is shown at left. (Ronda Churchill/Las Vegas Review-Journal)

Regent Allison Stephens accused Board Chairman Rick Trachok of “inappropriate and possibly illegal behavior” regarding the failed national search for a new chancellor to lead the Nevada System of Higher Education, a letter obtained by the Las Vegas Review-Journal shows.

Stephens said in the letter dated May 8 that Trachok “defied the will of the board and its committees, violated the open meeting law, deviated from standard board process and called into question the ethical standards the board represents.”

Stephens asked the board’s legal counsel to investigate and remedy Trachok’s actions. One of her suggestions was to cancel the scheduled May 9 meeting where Acting Chancellor John White was to be appointed to the position permanently. It’s unclear whether White knew about the letter, but a few hours after the meeting was canceled he withdrew his name from consideration.

“As the Board of Regents, we must shun even the appearance of unethical behavior, and this process has been marred,” Stephens said. She ended by threatening to contact the attorney general if the issue was not remedied by 2 p.m. that same day.

Her letter, and subsequent same-day response from special counsel Dean J. Gould, sheds further light on a fractious Board of Regents that has been without a full-time chancellor since former Chancellor Dan Klaich resigned last May.

Stephens and Gould exchanged letters and also spoke on the phone May 8.

Gould said in his letter — also obtained by the Review-Journal — that he “strongly disagrees” with Stephens and that “no NSHE policies were violated during the search process.”

Contacted on Thursday, Trachok said he cannot comment on matters of attorney-client privilege, but said he agreed “unequivocally” with Gould’s opinion. “I was really pleased that we might have had John as our next chancellor,” Trachok said. “I stand by that. The sad thing about all of this is that we lost a good man.”

Regent Cedric Crear said Thursday he was “shocked” by Stephens’ letter. Both letters were sent to all regents.

“I don’t believe there was a violation of any open meeting law, or that our chair has done anything illegal that I’ve seen,” he said.

A source of contention outlined by Stephens stemmed from the April 20 search committee meeting where White was discussed by the regents as a possible chancellor candidate. During the meeting, Gould warned that they were dangerously close to the line of violating state open meeting law.

“Warnings from counsel during a meeting not to discuss an individual’s character of professional reputation do not constitute a violation of the open meeting law,” Gould said in the letter, adding that Nick Vaskov, vice chancellor for legal affairs, is in agreement.

The same day the letters were sent, White abruptly withdrew from consideration, citing a board dispute.

“I had some concerns on the way the board handled it,” said Regent Patrick Carter, who at the time called the decision to offer White the position a “backroom deal.”

“She (Stephens) just had a slightly different approach. It was unbeknownst to me that more than one of us had concerns about the way we were advancing the search.”

Stephens on Thursday said she believes White’s withdrawal was unrelated to her letter. Her letter was a “privileged and confidential” request for legal guidance, she said, and that her questions were related to Trachok, not White. She said she doesn’t know if someone shared the letter with White.

“It’s not something I’ve thought about,” she said Thursday.

“The letter comes out and all of the sudden, the chancellor pulls out? I would think there would have to be some correlation,” Crear said. “I would have some trepidation, too, if I wanted to be chancellor. Whether he got it (the letter) or not, I’m sure he caught wind of it. It doesn’t take much to catch wind of it when it was sent to all the regents.”