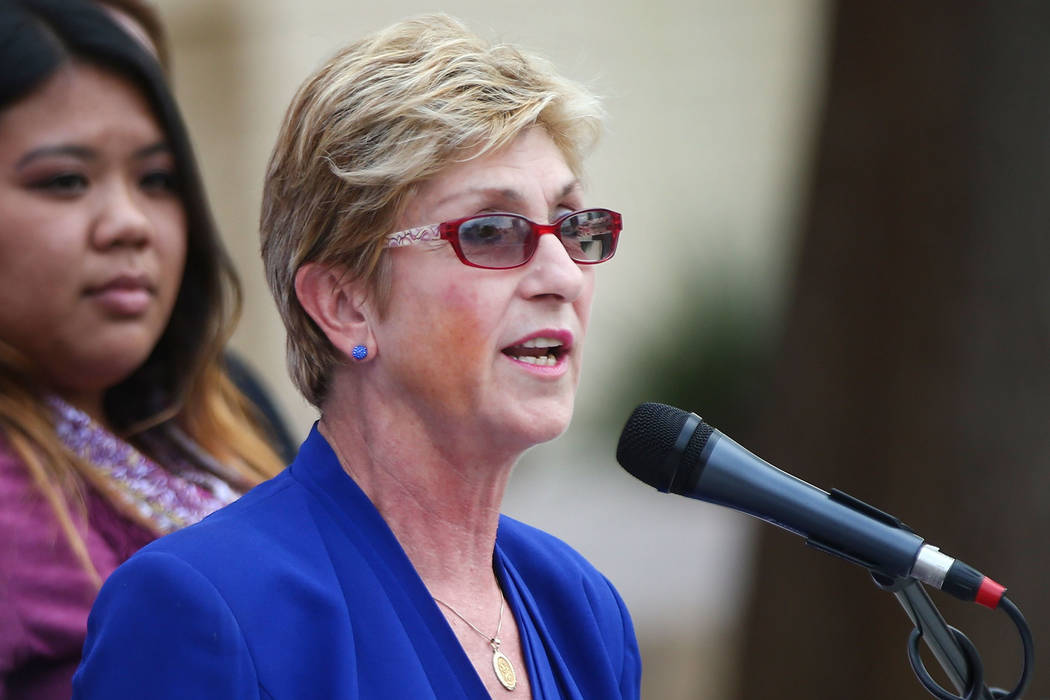 It had 73,846 students, mostly white English speakers. Census data from the year before show that only 8.8 percent lived in households below the federal poverty line.

Today, the district educates more than 320,000 children from diverse backgrounds. Over 40 percent of them are Hispanic, about 64 percent receive free or reduced-cost meals based on their families’ low-income status and nearly 20 percent are English language learners, the most recent district data show.

Education advocates argue that current funding levels are inadequate to serve this changing and challenging population, let alone all students.

“At the end of the day, no kid is funded at a sufficient level in Nevada for that kid to be able to have an opportunity (for) a successful education,” said Sylvia Lazos, policy director for the education policy organization Educate Nevada Now.

Although recent investments in education have helped, the advocates say they are only a fraction of what’s needed.

“I’m not saying throw money at schools, but they’ve never thrown it at schools in my 30-plus years,” said Commissioner Chris Giunchigliani, a former teachers union president and assemblywoman who is running for governor. “We’ve never had a windfall of anything.”

“I don’t think more tax dollars should go to government schools because they’re not the best way to improve education,” said Robert Fellner, transparency director of the Nevada Policy Research Institute, a libertarian think tank. “They’ve clearly, I think, proven that over the past 50 years.”

Competition and choice are needed to spur education improvements, including dealing with the district’s changing demographics, said Fellner, who supports school choice savings accounts, a controversial initiative that would allow parents to use state funding to pay for private schools.

“It’s one of the areas where you need competition and different, unique ways of doing things to cater to the unique students more than almost anything else,” he said.

To get to the heart of the dispute, it’s informative to retreat to 1967, when the Legislature created the education funding formula known as the Nevada Plan.

The Clark County School District’s per-pupil dollars from the Distributive School Account, the primary mechanism by which the state funds public education, have increased 66 percent since 1967, accounting for inflation, a Guinn Center analysis shows.

But that tells only part of the story.

Many education initiatives over the past 50 years have been categorical, meaning they are not reflected in the Nevada Plan funding. These include a rollout of full-day kindergarten, roughly $3 billion to reduce class sizes and, more recently, efforts to boost certain struggling student populations.

That money includes the Victory and Zoom programs — funds reserved for low-income students or English language learners. The past two legislative sessions approved $470 million in such categorical funds.

“Categorical programs ensure accountability in our investments and will hold teachers, administrators and students responsible for student achievement,” he said in a statement. “Republicans and Democrats should continue to focus on return for the investments of taxpayer dollars and build on what is working and change what is not working.”

Those fighting for more funding counter that many of the increases have addressed narrow needs without improving public education for all students.

Many blame the state of education funding on the Legislature’s reluctance to raise taxes.

Giunchigliani, a Democrat, said she spent more than a decade pushing for kindergarten funding before Nevada approved it. Legislators knew what the long-term positive impact would be, she said, but “nobody really wanted to pay for what needed to be paid for.”

Mike Hillerby, deputy chief of staff to former Republican Gov. Kenny Guinn, said education funding difficulties mirror a broader mindset created by Nevada’s boom-bust economy. Legislators are wary of increasing spending during good times lest they be left holding the bag when the next downturn arrives.

“We’ve put Band-Aids on things, we’ve made cuts, we’ve not given raises,” he said. “We used every kind of gimmick and trick in the book to try to get by, and then you end up in a situation where it’s just not working anymore. There’s just not enough revenue.”

Supporters of more funding for education also argue that some initiatives intended to bolster schools have not been used as intended.

Initiative Petition 1 of 2009, for example, increased the room tax by 3 percent to generate additional funding for the State Supplemental School Support Account. Yet since 2011, the Legislature has transferred that additional revenue to the DSA, reducing the state’s contribution to school districts’ per-pupil amount.

The state’s general fund is the last source used for districts’ basic support provided through the DSA, covering what local revenue and other taxes cannot. Which means that if tax revenue comes in higher than projected, the general fund portion of the basic per-pupil support is reduced and can be used on other state initiatives that might not be related to education. 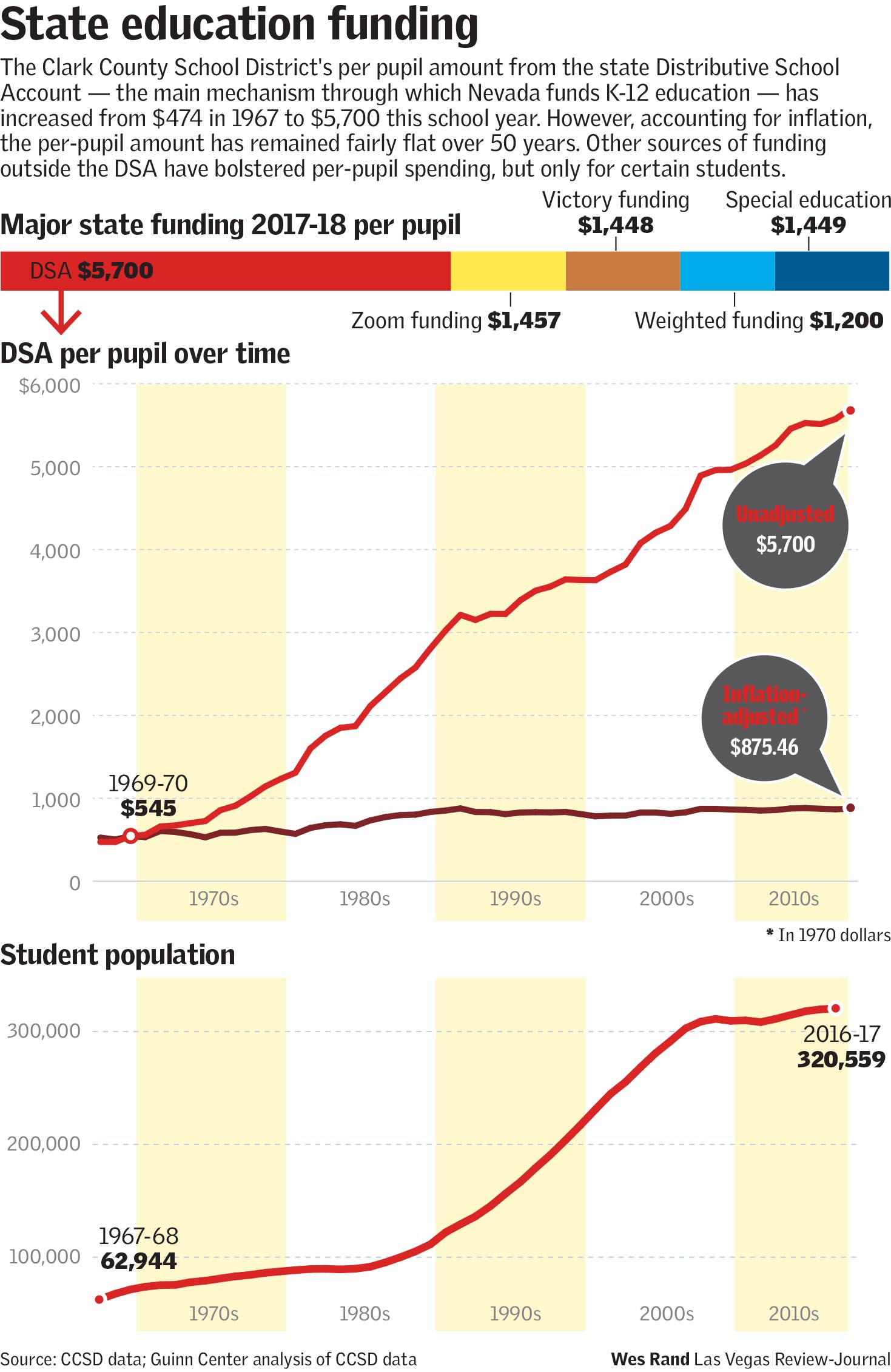 In other words, the $893.7 million generated since 2011 from that initiative hasn’t added money on top of the per-pupil amount the district receives through the Nevada Plan.

“The pie doesn’t get any bigger,” Clark County School Board President Deanna Wright said, expressing frustration about the accounting method. “It doesn’t matter if it’s a room tax or pot money or anything else. If you don’t increase the size of the pie, the money doesn’t increase.”

Educate Nevada Now, which is backed by the education-supporting Rogers Foundation, also is critical of the move.

“When voters approve a tax increase for education or for any purpose, it is up to the state to carry out that intent,” it said in a statement. “It seems that these funds were used in place of other dollars that were then diverted, leaving the education budget stagnant. This move shortchanges our students, educators and families out of millions of dollars intended to go to classrooms and is deceitful to voters.”

But Jim Wells, director of the governor’s finance office, argues that the “pie” has increased significantly, not in the school account, but via the categorical funds outside of the Nevada Plan.

“Use of the IP 1 money in the DSA account has freed up state general funds to allow the governor to enhance education funding through his new categorical program initiatives,” Wells said in an email, referring to programs such as Victory and Zoom.

The state’s general fund also has added money to the school account when tax revenue is lower than projected.

Since 2000, the Legislature appropriated a supplemental $496 million for the account. In that same period, it has allocated more than $477 million back to the general fund, because of either excess tax revenues or lower-than-projected student enrollment.

Sandoval also disagrees with the premise that counties, especially Clark, have been given insufficient funding to meet their objective of providing a quality education to every student in Nevada.

“The Clark County School District alone will see $98.35 million added to its budget over the current biennium,” Sandoval said. “This increase included a $17 million appropriation added late in the legislative session for a human capital management system.”

A call to action

The recent boost to education spending hasn’t been evident, however, as the Clark County School Board has slashed its budget to cover a roughly $60 million deficit.

An angry crowd attended a meeting Nov. 30 to save their jobs from elimination as the board sought to erase its deficit. Equally angry trustees responded by urging the public to lobby the Legislature for proper funding for education.

Despite Sandoval’s investments, the Clark County School District is still in a world of financial hurt.

Nevada’s former first lady Sandy Miller took to the microphone with a message to the crowd: Change the makeup of the Legislature in 2018 and give seats to those who care about education.

“We advertise ourselves as a free place to live,” she said of Nevada. “Nobody has to pay any taxes, and this is the result of what happens when people don’t have the responsibility to support our schools, to support our social services, to support our health department. … It’s criminal what’s happening, and you need to go back to your schools (and) engage them.”

Read Part 1 in the series at https://www.reviewjournal.com/education1.

Next in the series: Where do we go from here?

A previous version of this article incorrectly described the process by which Initiative Petition 1 of 2009 became law.