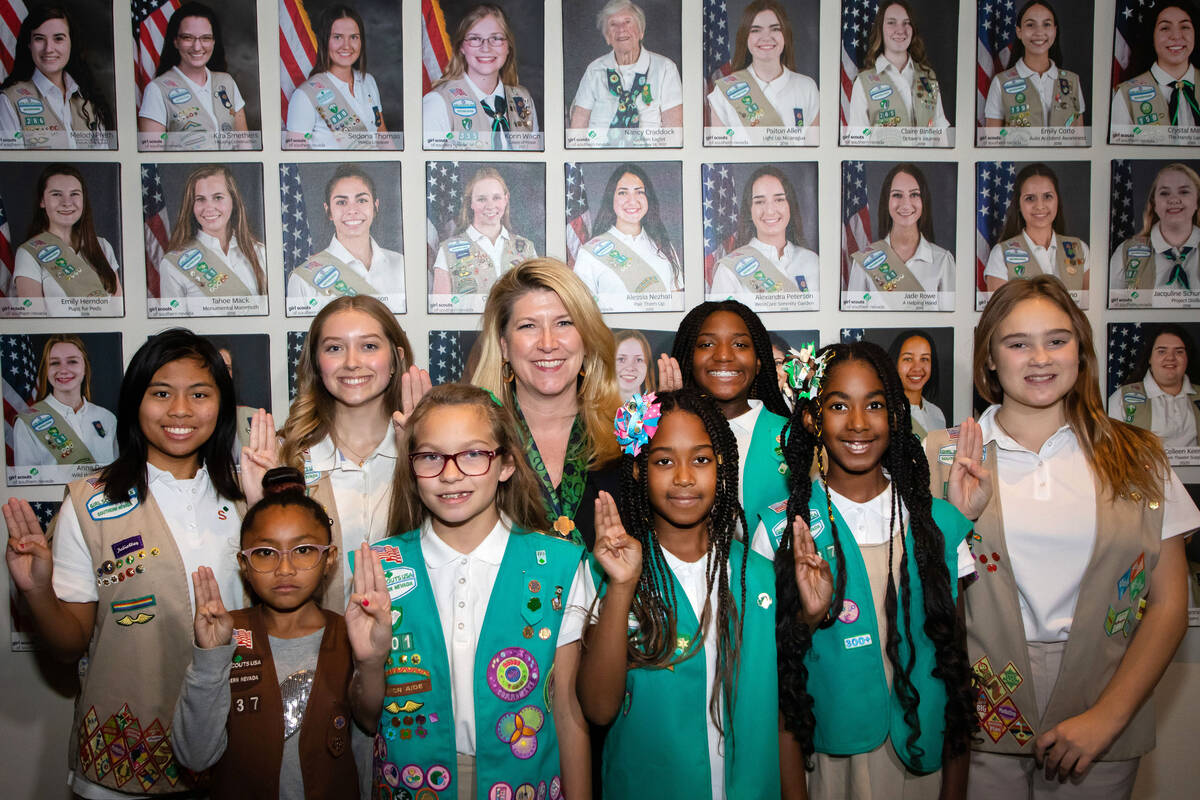 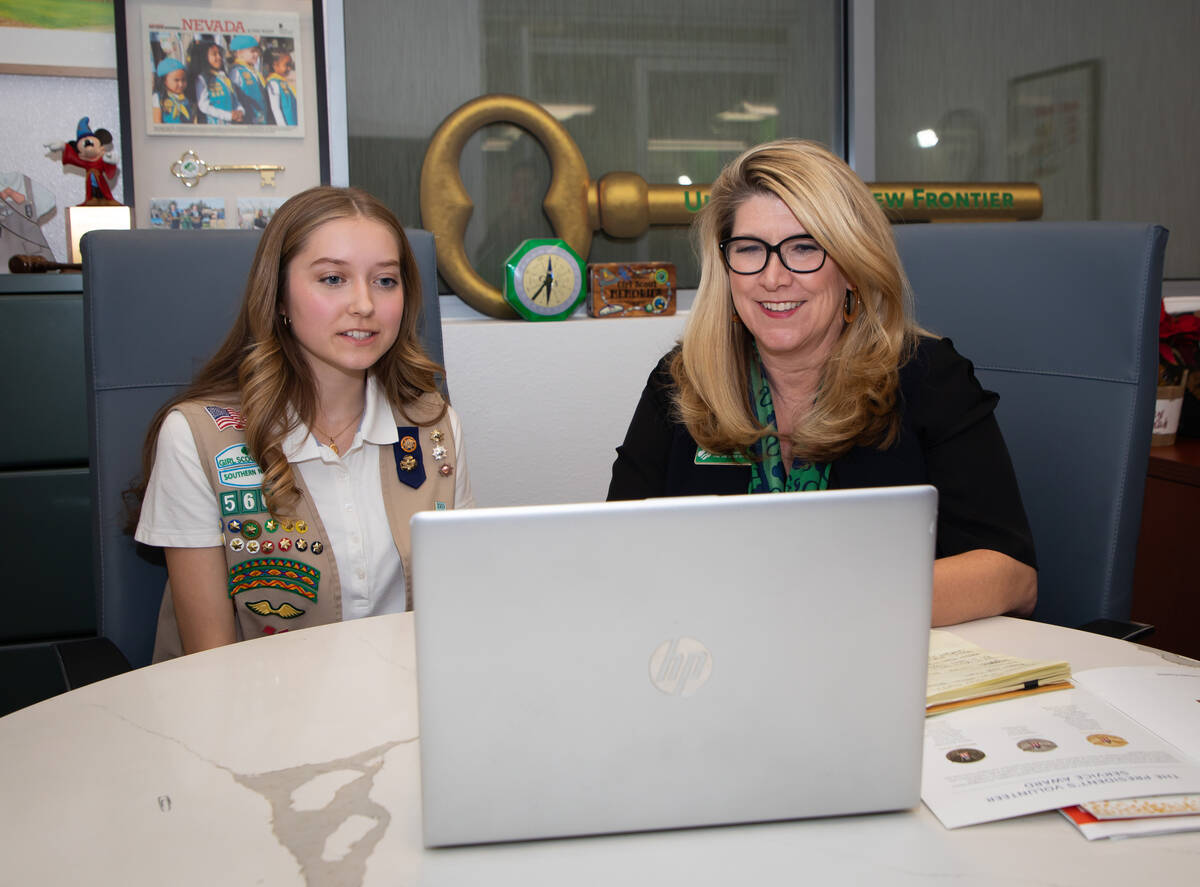 Anna Newcomer, a UNLV freshman and Girl Scout lifetime member of Troop 566, left, and Girl Scouts of Southern Nevada CEO Kimberly Trueba, right, speak to the Review-Journal during a Zoom interview about a college scholarship, Wednesday, Dec. 7, 2022 in Las Vegas. A Girl Scout in Southern Nevada will be the first active member nationwide to receive a $100,000 college scholarship next year. (Amaya Edwards/Las Vegas Review-Journal) @amayaedw5

One lucky Girl Scout in Southern Nevada will become the first active member in the country to receive a $100,000 college scholarship next year, thanks to a first-of-its-kind award for local Scouts.

It’s the largest scholarship available to date for any Girl Scout nationwide after a new annual award was created by the Charles and Phyllis M. Frias Charitable Trust.

“It’s impactful. It can change a girl’s life. It can change their trajectory,” Girl Scouts of Southern Nevada CEO Kimberly Trueba said. “I think what’s even more important is the trust it’s coming from.”

Charles and Phyllis Frias operated the state’s largest transportation company, starting it in 1965, until their deaths in 2006 and 2016, respectively. The late couple were active in community philanthropic efforts, and in 2003, had an elementary school in the southwest valley named after them.

John Mowbray and Jack Hanifan, trustees of the Charles and Phyllis M. Frias Charitable Trust, said the gifts extend the Frias legacy and their focus on youth in the Las Vegas area.

In December 2018, the trust donated a 70-acre, $9-million ranch in Alamo, Nevada to the Girl Scouts of Southern Nevada. And earlier this month, the trust announced it would award five $100,000 scholarships for Southern Nevada high school seniors.

“During their lifetimes Charles and Phyllis Frias were engaged in philanthropy in Southern Nevada on a level that few, if any, ever matched. The Frias charitable giving legacy endures today and will be sustained in the years ahead in collaboration with community philanthropic partners such as the Girl Scouts of Southern Nevada,” the trustees said in a statement.

The local youth organization also has two additional scholarships for Southern Nevada Scouts, whose award amounts are typically less than $2,000.

Anna Newcomer, a UNLV freshman and Girl Scout lifetime member of Troop 566, received the Helen Wronski scholarship last year. She said her experiences learning about community advocacy and health helped her find a passion to study biology and focus on a career in research.

Newcomer said the scholarship was in part a recognition of her Gold Award project, the Girl Scouts’ highest award that involves a service project that addresses an issue in their community.

“I would refer to it (Gold Award) as like the James Beard recognition or the Pulitzer Prize,” Trueba said.

For her project, Newcomer created a database of volunteers and communication materials for her church’s homelessness and housing outreach program.

She worked on it throughout the pandemic and faced obstacles putting the project together while working remotely.

“I get very emotional talking about my Gold Award because it took a lot out of me, but I’m very happy now,” Newcomer said. “I like to see things through. My mom definitely pushed me to finish Girl Scouts, but I’m thankful for it.”

Current Girl Scouts from troops in the Girl Scouts of Southern Nevada are eligible to apply for the newest $100,000 award. They must be high school seniors living in Clark, Esmeralda, Lincoln or Nye counties, a GPA between 2.0 and 3.6, and demonstrate financial need.

Applications are due Jan. 31, 2023, and the winner will be announced in April.

The winning applicant will receive one $25,000 scholarship for the first year; they’ll be eligible to renew it annually provided they remain enrolled in higher education full-time and maintain at least a 2.0 GPA.

The scholarship will be administered through the nonprofit Public Education Foundation.

Girl Scouts of Southern Nevada doesn’t keep records on how many of its graduates go to college or need financial assistance for post-secondary education, but Trueba said she expects the need to be strong.

Members receiving financial assistance from the Girl Scouts — such as support for patches, uniforms, membership or programming — has gone up from 9 percent in 2021 to 13.5 percent, so far, for the 2023 membership year, Trueba said.

“The cost of going to school has increased significantly,” Trueba said. “It’s more challenging to have the opportunity to go to school because it’s expensive. So having the resources like the scholarships are critical to setting them up for success in the future. If we invest in them now, I think we’re all going to be better off later.”