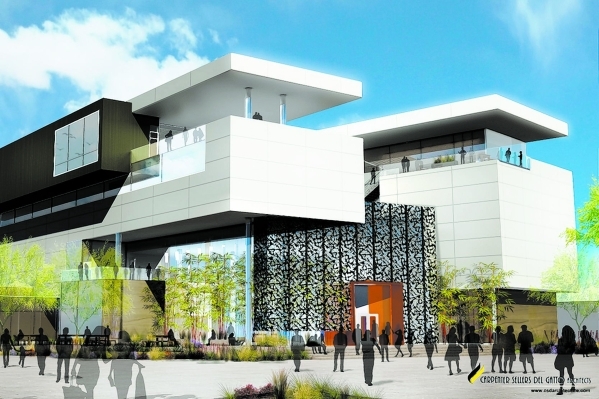 A rendering shows the $56 million building that will house the Harrah College of Hotel Administration at UNLV. The Marriott Foundation has pledged $2.5 million toward construction of the building. (Courtesy University of Nevada, Las Vegas) Created June 16, 2015.

UNLV’s hospitality school is getting an overhaul as university leaders grapple with widespread discontent at one of Las Vegas’ most revered college programs.

Since a workplace mood survey exposed low morale and clashes with leadership at the William F. Harrah College of Hotel Administration last year, UNLV has assembled a plan to boost spirits by breaking the school into three departments and creating a new position for a vice dean to work under Dean Stowe Shoemaker.

The reshuffling could start as early as this summer, pending approval by state higher education officials.

“We all want the college and we want UNLV to be successful,” said Shoemaker, who faced harsh criticism in the comment-heavy review. “I’ve changed my leadership style … and we’re much more collaborative.”

Southern Nevada runs on hospitality: Tourists pumped $50 billion into the local economy in 2014 alone, according to the Las Vegas Convention and Visitors Authority. UNLV touts the famed Strip as a “living laboratory” for hospitality students, and the hotel school regularly ranks among the world’s best.

Last year’s survey revealed turmoil within the prized program and led to damage control efforts from top university officials. The survey of faculty and staff was conducted in May at the request of professors who were displeased with leadership. An employee then shared the closely guarded document with the Las Vegas Review-Journal, which made it public two months later.

“Overall, the dean has backed off a little bit,” said one employee who declined to identify himself out of fear of retaliation. “People are happy we’re getting departments back — that was a morale booster for sure.”

Meeting professor demand, the hotel college plans to create three undergraduate departments and reverse a 2010 directive by Shoemaker’s predecessor to funnel all classes into a single course of study.

The school aims to build programs on hospitality management; dining and events management; and resort, gaming and golf management. The Nevada System of Higher Education Board of Regents could decide whether to approve the plan as early as June.

“We went over and we listened a lot,” interim Provost Nancy Rapoport said last week. “It was important to have good dialogue among all of us so we could hear in real time what the major concerns were and how that meshed with what the climate survey was saying.

“Probably the biggest thing to come out of that was that the faculty was very clear that it wanted departments back,” she said.

The 2010 consolidation was carried out by former Dean Don Snyder and shaved millions of dollars in costs as UNLV grappled with the aftermath of the economic downturn. But many professors argued that they couldn’t produce specialized graduates under the streamlined program.

Some also complained that because department chair positions were eliminated, faculty had less influence over the dean’s decisions, such as tenure picks.

With new departments, the school plans to enlist a vice dean to handle “day-to-day details” at the college, Rapoport said. The position would bring the hotel college in line with other UNLV programs that have deputy deans — such as the education and law schools — leaving Shoemaker to engage with the tourism community and raise money for the hotel college.

“There’s no physical way for deans who are externally focused also to pay as close attention to day-to-day details of running a college,” Rapoport said. “A lot of places have a second-in-command.”

After the survey, UNLV officials began swift and strong damage control. Hundreds of pages of emails obtained by the RJ through a public records request show Rapoport and other leaders quickly arranged meetings with frustrated employees after they learned about the review in early June.

Faculty and administrators alike worry that signs of dysfunction might jeopardize the program’s good reputation — in 2009, the Journal of Hospitality and Tourism Research ranked UNLV as having the fourth-best hospitality and tourism program in the world, preceded by Hong Kong Polytechnic University, Cornell University and Michigan State University. The college is especially sensitive to its image amid efforts to draw donations for a $56 million building, whose construction is to start next month.

“The administration needs to recognize that the college needs a leader and one who will lead us back to the reputation we once enjoyed,” one anonymous survey respondent wrote. “We have two years to prepare for our 50th (anniversary) and our new building. At the rate we are going, there won’t be much to celebrate.”

Tensions seemed to escalate as university officials tackled the crisis, the emails showed. Rapoport noted that both sides would have to “give each other the benefit of the doubt while changes are being made,” in a July 31 email sent two weeks after an employee shared the survey with the RJ.

Another email shows that although Rapoport and UNLV President Len Jessup told Shoemaker not to pursue the RJ’s source for the review, he sought help identifying the person.

“I felt bad — it’s like when your wife doesn’t want to talk with you and you want to know what you did to make them so upset,'” Shoemaker said. “After I thought about it … I thought it really doesn’t matter who sent it out because I want to change the behavior to make the college better.”

Shoemaker has since sought advice from a management coach, the emails show.

To track progress, UNLV officials said they plan more frequent workplace mood surveys throughout the university. Administrators typically carry out the polls once every five years, but they hope to conduct at least one annually. Last year’s hotel college review, requested by hospitality professors and approved by Shoemaker, was the first to focus specifically on morale within that program.

Regent Allison Stephens lauded UNLV’s efforts to address employee frustrations, but she urged caution about spending more on administrative jobs. Stephens also criticized the university for not telling the state’s higher education officials about the survey before the RJ began to investigate its findings.

The hotel college faces a common problem. Experts say faculty discontent is prevalent nationwide, and professors often lash out at their bosses when they feel excluded from the decision-making process.

“Sometimes things blow over,” said William Tierney, who co-directs the Pullias Center for Higher Education at the University of Southern California. “Other times the discontent has to do with the leadership of the unit, and changes need to occur.”

“It’s very difficult to weather a storm like this when you as a key leader of your faculty lose the confidence of the faculty,” said Jerlando Jackson, who specializes in higher education governance at the University of Wisconsin-Madison. “Usually at this stage, campus leadership will do damage control to try to keep faculty from abandoning ship.”