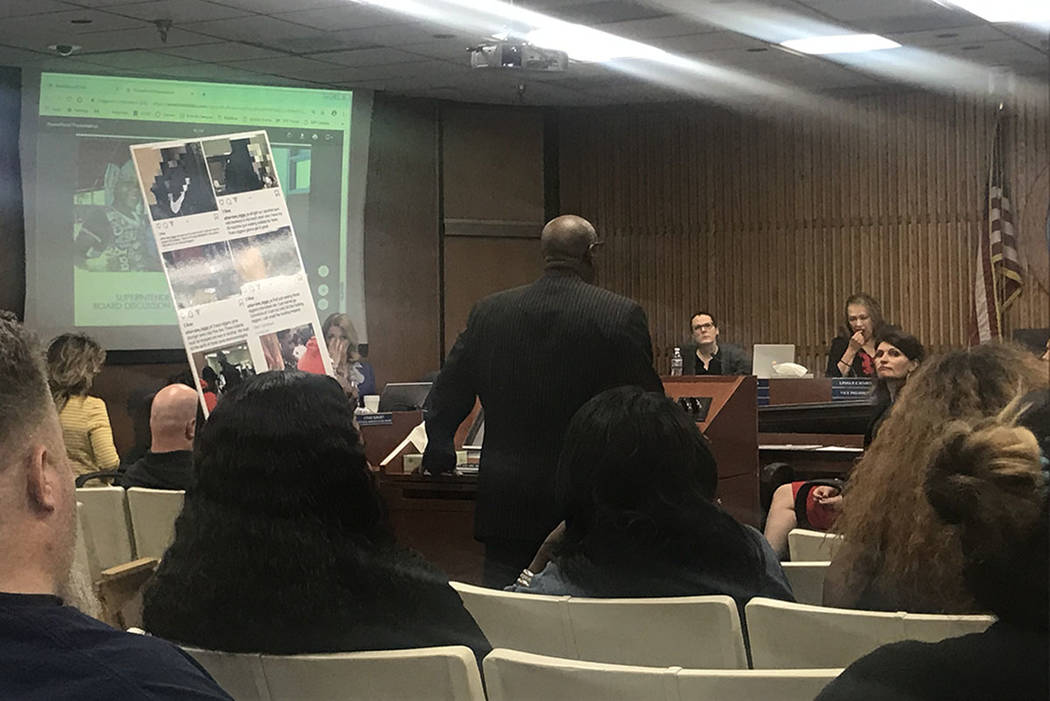 The Clark County School District will partner with a national equity organization to improve the cultural climate at Arbor View High School, one of several changes being made after two students were arrested in the posting of racist threats on social media last month.

But those initiatives are still not enough for Arbor View parents, who are calling for improvements in what they call a systemic problem that has gone unaddressed.

They also balked when Trustee Danielle Ford used the term “colored students” rather than “students of color” during a heated meeting Thursday night. Trustee Linda Cavazos leaned across the dais to correct her as a few people in the crowd grew angry and eventually stormed out.

Trustees acknowledged that the racist threats were mishandled and called for changes in protocol.

The male students, 15 and 16, arrested in the threats that targeted black students on social media will not be returning to school, Superintendent Jesus Jara told the School Board on Thursday.

Both will appear in juvenile court Friday morning, at which time the student who created the account will be sentenced by Juvenile Court Judge William Voy. That student pleaded guilty last week to a felony charge of making a terrorist threat.

His co-defendant, meanwhile, will appear for a plea hearing.

Officials have not named the students because they were not charged as adults, Brigid Duffy, Clark County’s chief juvenile prosecutor, has said.

Students who were targeted in the posts have been offered counseling, Jara said Thursday.

In April, the National Equity Project will work with the school to provide training on implicit bias as well as other areas, he said.

But parents and community members still called for more changes, expressing outrage about how the threats were handled.

Ebony Davis said her son was pepper-sprayed by a student at Arbor View in February. The student didn’t attend Arbor View, she said, but was called to the campus by another student who was posting white nation posters on social media.

“It saddens me that my son could be assaulted because he was standing for justice and against racial injustice,” she said.

She asked that teachers be prepared to teach ethnic and diversity studies and suggested adding metal detectors in schools.

“I’m standing here not just representing my son but all the sons and daughters who have been assaulted, threatened, bullied and discriminated against because of the color of their skin,” she said.

Cari Ondush, a fifth-grade teacher at Staton Elementary School whose son attends Arbor View, asked the board for more training for teachers.

“I talk to my students about race, I talk to them openly about it, and sometimes I’m scared about what I say because I don’t know what I should and shouldn’t say,” she said.

Roxann McCoy of the local branch of the NAACP said the Arbor View threats were not isolated and shows that systemic racial and equity issues in the district that have gone unaddressed.

She asked the board to require implicit bias training at the school, but also begin a more “aggressive approach” to work on cultural competency.

She also asked trustees to consider addressing hate-based symbols, such as the Confederate flag, in the dress code.

And after the district presented its protocol for handling communication during school threats, parents criticized that.

“While you were creating these policies to look good on a television prompt, your administrators did not know how to implement the protocol that you created, nor did your CCSD school police,” said parent Jshauntae Marshall.

Danielle Ford posted a video on her Facebook page Friday, apologizing for her choice of words.

In the post she said, “My sincere apologies to everyone I hurt with my statement at last night’s board meeting.”