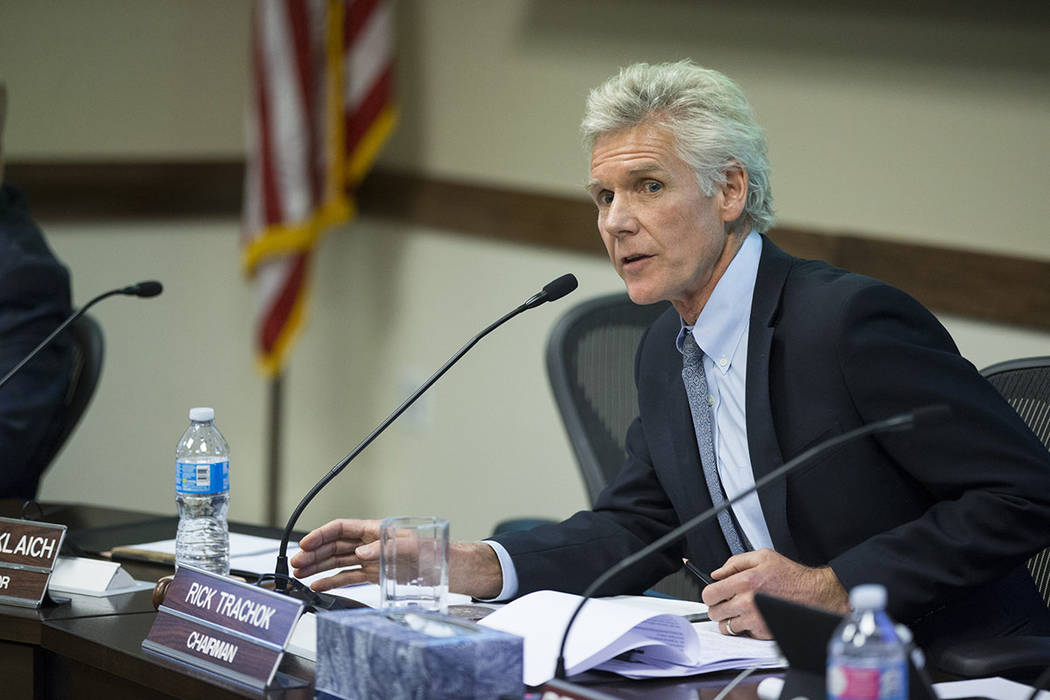 Rick Trachok, chairman of the Board of Regents, speaks during a special meeting at the Nevada System of Higher Education offices on Thursday, May 12, 2016, in Las Vegas. (Erik Verduzco/Las Vegas Review-Journal)

Board of Regents Chairman Rick Trachok has recommended that the Nevada System of Higher Education postpone its search for a new chancellor after five semifinalists withdrew as applicants.

In a memo addressed to the search committee and advisory council members, Trachok said he’d rather delay the search than consider any remaining candidates for the job. He did not give a time frame for restarting the process.

“I am convinced that it is better to proceed in this manner than to bring forward candidates who I am not convinced will be able to successfully serve as the next NSHE Chancellor,” Trachok said in the memo dated April 10.

Those five candidates who withdrew were the “top choices,” Trachok said in the letter.

Regent Sam Lieberman, who is a member of the search committee, said Wednesday that postponing the search could be one possible action the committee takes at its next meeting on April 20. Lieberman added that he had not yet read the memo, but had spoken to Trachok.

The search for a chancellor began in December when AGB Search of Washington, D.C. was chosen to take the lead in finding a replacement for John Valery White, a law professor and former UNLV administrator who is currently the interim chancellor.

Lieberman said he would be a “strong supporter” of White staying in the position.

“I think he’s done a tremendous, tremendous job,” Lieberman said. “I think that he has ability and the temperament to do the job. That said, he has always said he will not be a candidate, and I haven’t heard from him that he is interested.”

White’s one-year, $303,000 contract ends June 30. But according to White’s contract, he is ineligible to apply for the permanent position of chancellor. Lieberman said he believes that White asked for that item to be added to his contract.

According to the memo, the search firm received 33 applications for the position. The semifinalists included three women and six men, Trachok said.

One candidate withdrew on the second day of interviews after accepting a job elsewhere. The other four candidates withdrew due to concerns about the public nature of the search process and the requirements imposed by Nevada open meeting law, Trachok said in the letter.

“I think unfortunately this is a case where the open meeting law is hindering our ability to select the best candidate to be able to run the best system of higher education possible,” said Regent Trevor Hayes, a member of the search committee.

He said three candidates dropped out of the search for a new UNLV president about two years ago because of similar concerns. Hayes thinks a tweak should be made that would allow the committee to select the finalists first, not semifinalists, before a meeting agenda becomes public.

“I think in this instance there needs to be a balance where we put transparency and effectiveness into play,” he said.

The search coincides with the 2017 legislative session, where bills have been introduced that would impact the system of higher education as well as the makeup of the Board of Regents. Assembly Bill 331 seeks to give the state’s four community colleges their own coordinating board; Assembly Joint Resolution 5 would remove the Board of Regents from the Nevada Constitution, giving lawmakers the authority to enact changes.

“I can’t tell you what they took into consideration or not,” Trachok said Wednesday, referring to the candidates who withdrew. “They were aware of those bills.”

Trachok said he spoke with the top candidate, who expressed interest in continuing the search process if he or she would be the only one considered by the committee. Trachok said in the letter that he was willing to do that, but the applicant stepped aside anyway.

“I made a commitment to Chair (Kevin) Page, the committee and the entire Board of Regents that I would only bring forth candidates that I believed were the right fit for this high level and extremely important position,” Trachok said in the memo. “I made it clear that I was not willing to settle for second best.”

AGB Search originally set the starting date for the new chancellor on July 1. The search schedule, which was previously posted on the NSHE website, has been taken down.